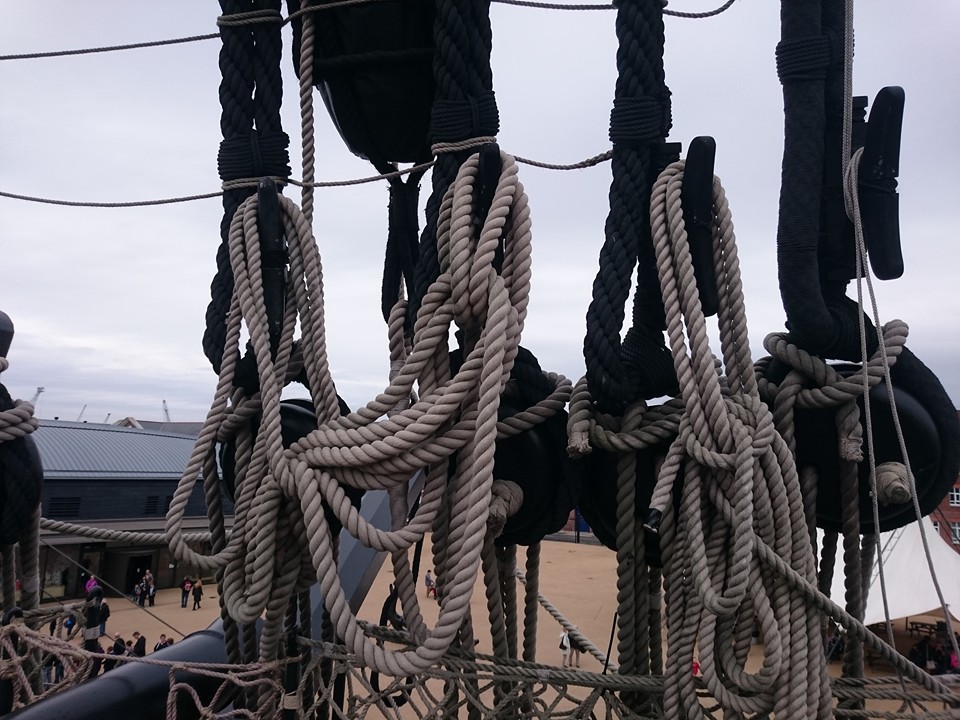 The topic of today’s post? One of Britain’s most famous ships, the oldest commissioned ship in the world, flagship of the First Sea Lord, and the location that set me on my path to becoming a lover ofnaval history.

HMS Victory is often referred to as Nelson’s flagship at Trafalgar, and whilst this is true, Victory has had a long and colourful history, is more than Nelson and far more than just Trafalgar! 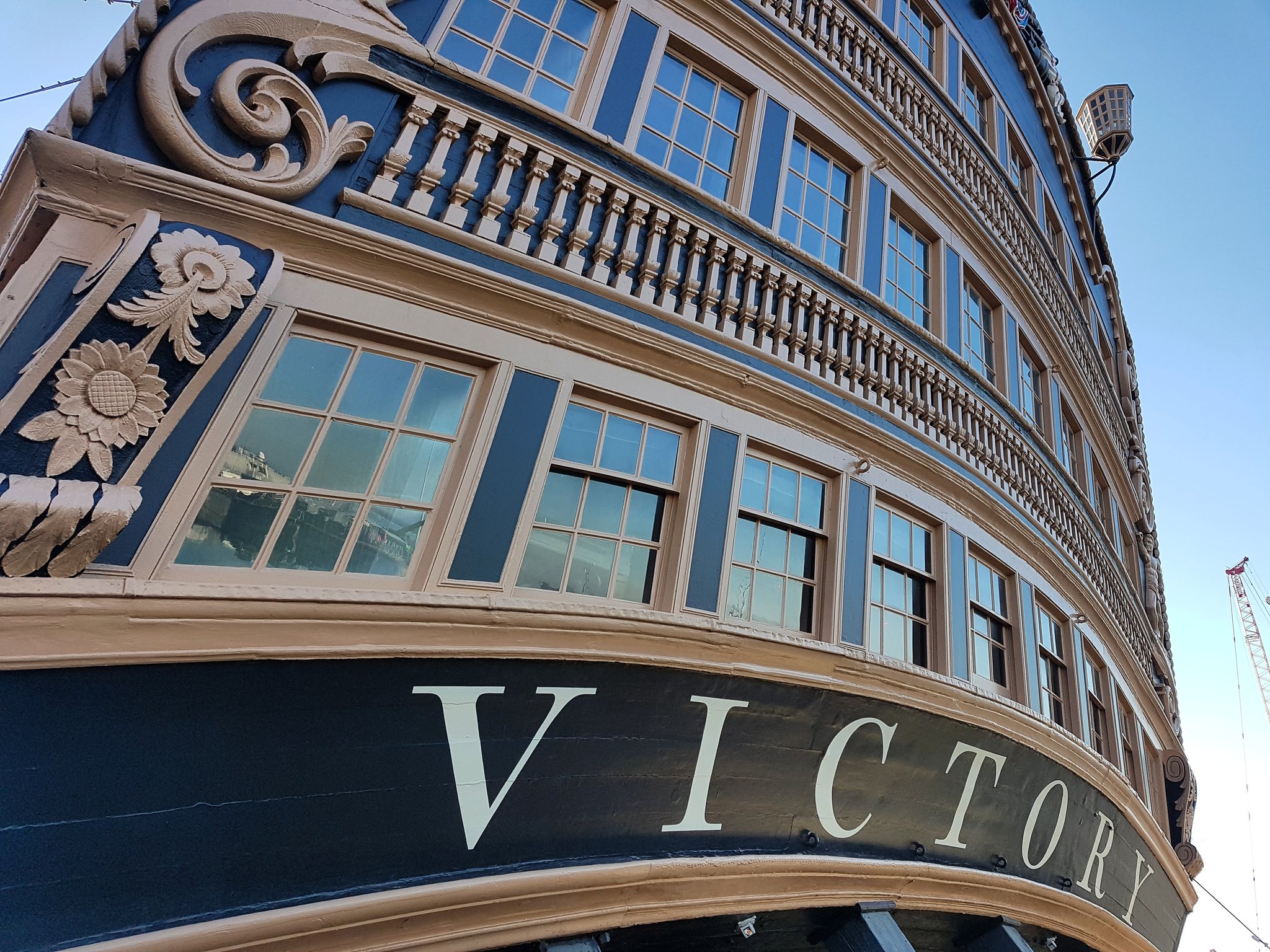 December 1758: Victory, sixth to hold the name, is ordered.

July 1759: The keel of the Victory, a first rate ship of the line, is laid down, in seven parts initially, at Chatham Dockyard. The cost in modern money equates to around £46.5 million.

March 1778: Victory is commissioned to celebrate the Annus Mirabilis (year of miracles) of 1759, where the British managed a string of military victories over the French.

May 1778: Victory becomes the flagship of Admiral Augustus Keppel, in command of the Channel Fleet.

July 1778: The First Battle of Ushant: Keppel’s fleet of around 30 ships engages a French fleet of 29, at Ushant.

October 1782: Victory becomes the flagship for Admiral Richard Howe, famous for his role in the Battle of Quiberon Bay in 1759. He also commanded the British fleet during the Glorious First of June in 1794. In 1782, Howe was tasked with ensuring the safe arrival of transport ships to Gibraltar, carrying supplies for the fleet. A number of Howe’s ships were forced in to the Mediterranean by strong currents, and the Franco-Spanish fleet followed them from Algeciras. The British regrouped East of Gibraltar and eventually managed to deliver all supplies safely. As they left Gibraltar the Spanish fleet followed and HMS Victory took part in the Battle of Cape Spartel. This was an indecisive battle and Howe sailed back to England afterwards.

February 1797: Admiral Sir John Jervis, 1st Earl of St Vincent, known for his victory at the Battle of Cape St Vincent in February 1797 and Commander-in-Chief of the Mediterranean fleet.

“His importance lies in his being the organiser of victories; the creator of well-equipped, highly efficient fleets; and in training a school of officers as professional, energetic, and devoted to the service as himself.” – P.K Crimmin 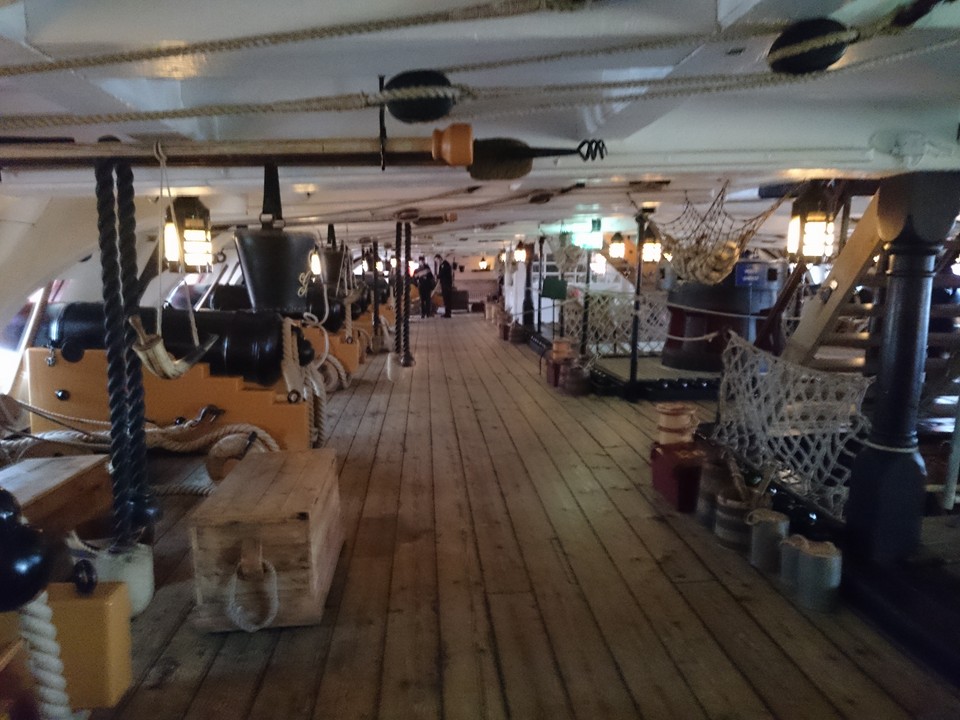 1800: Victory undergoes a major refit, with an increased number of guns, a new figurehead and masts and is decorated in the famous “Nelson Chequer” 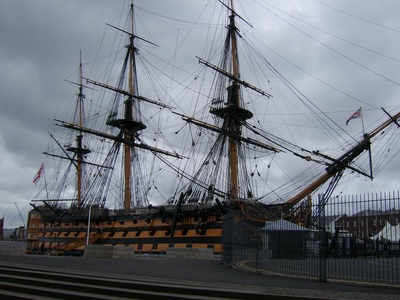 1803: Refit complete, at a cost of around £70,000, Victory sailed for Portsmouth, where Horatio Nelson raised his flag on the ship after being made Commander in Chief Mediterranean Fleet.

At this time she was already flagged under Admiral Cornwallis, however, upon realising that the ship was not ready for sea, Nelson sailed for the Mediterranean on a different ship, HMS Amphion. Cornwallis declined the opportunity to raise his flag on the Victory and so, after having been made ready for sea and reaching the Mediterranean, Horatio Nelson once more raised his flag onboard the Victory with Thomas Masterman Hardy as Captain.

September 14th 1805: Horatio Nelson makes his final voyage from Portsmouth on the Victory, alongside HMS Euryalus. 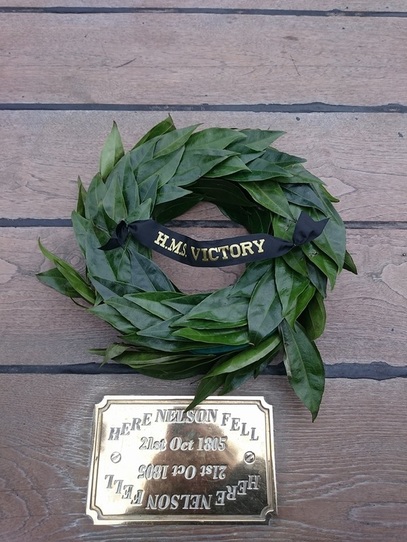 October 21st 1805: The Battle of Trafalgar. The Victory’s most famous battle, against the Franco-Spanish fleet, under Vice Admiral Horatio Nelson. Victory headed up one column with the other being headed up by Royal Sovereign.

The British lost no ships, the Franco-Spanish fleet lost 22. Horatio Nelson was shot on board the Victory and died on the Orlop Deck later in the day after hearing of his victory.

Victory was badly damaged at Trafalgar and was towed to Gibraltar after the battle for repairs. The extent of the damage was so bad that the ship could not sail.

After refit, Nelson’s body was taken back to England on board the Victory for his funeral at St Paul’s Cathedral in January 1806.

1812: Victory’s career as an active warship was over, and so was moored in Portsmouth Harbour to be used as a depot ship.

1889: Victory became a Naval School of Telegraphy for signalling until 1904, when the school was made a permanent building in the dockyard.

1921: The Victory was in a poor state after beginning to deteriorate whilst alongside at Portsmouth and the ‘Save the Victory’ campaign was launched.

1922: Victory is moved in to dry dock at Portsmouth, as she was unable to remain afloat, she underwent a huge amount of restoration and structural repair.

1941: Victory sustained a small amount of damage from a bomb dropped by the Luftwaffe. Part of the foremast was damaged (you can see part of the damage to this day). German propaganda claimed that they had destroyed the Victory and the Admiralty was forced to issue a denial to counter this claim.

2015: Victory celebrated a 250th birthday and was repainted in a more historically accurate colour scheme. Still undergoing serious conservation work in order to ensure that the ship is stable, there are currently no top masts. The keel was dropping by around 0.5cm per year due to water damage and the dry dock cradle was putting a lot of stress on the hull.

If you want to visit HMS Victory, this incredible ship is part of Portsmouth Historic Dockyard – Click here for their website – For more information on opening times, prices etc…