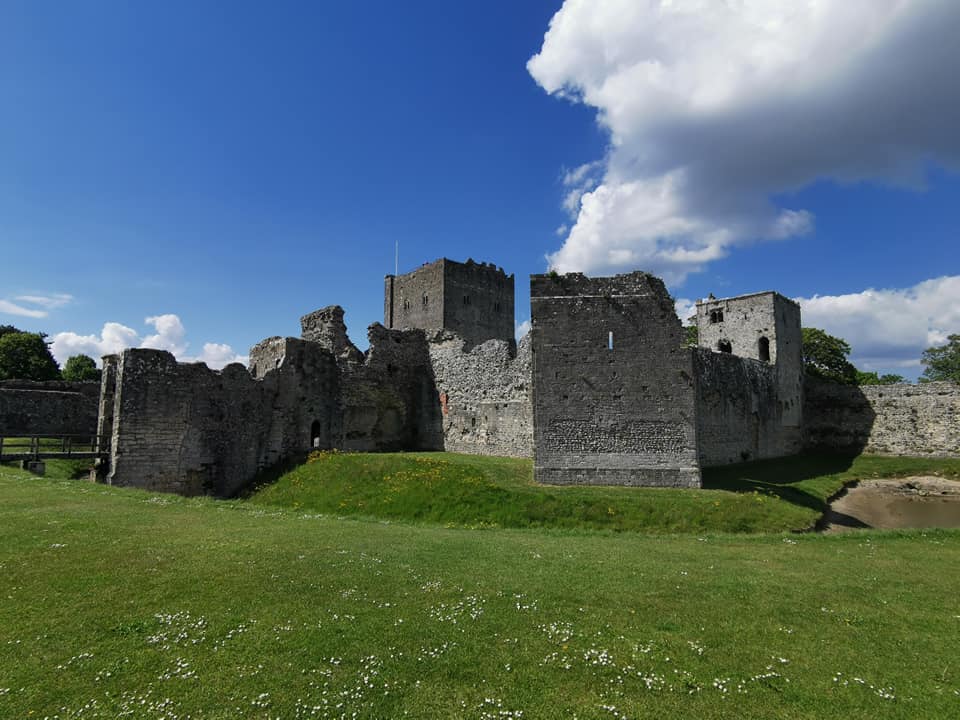 Occupying a commanding position at the northern head of Portsmouth Harbour, and built on the site of an old Roman fort, Portchester Castle was founded in the 11th Century and in later years served as the embarkation point for campaigns to France led by English kings.

A colourful history – King John used it as a hunting lodge, the castle was besieged and captured by the French in 1216 before permanently returning to English control, King Richard II had it as a palace, a plot to overthrow Henry V was discovered and the culprits apprehended here and during the French Revolutionary and Napoleonic Wars the castle was used as a prison.

Now? It’s a beautifully maintained English Heritage site and well worth a visit!

Portchester Castle contains the most complete set of Roman walls in northern Europe and is the most well preserved Roman fort north of the Alps. The wall remains at full height and is reinforced with U shaped bastions, but only 14 survive. After the departure of the Romans it’s thought that Saxons settled here to protect from Viking raiders, entering from the Solent. 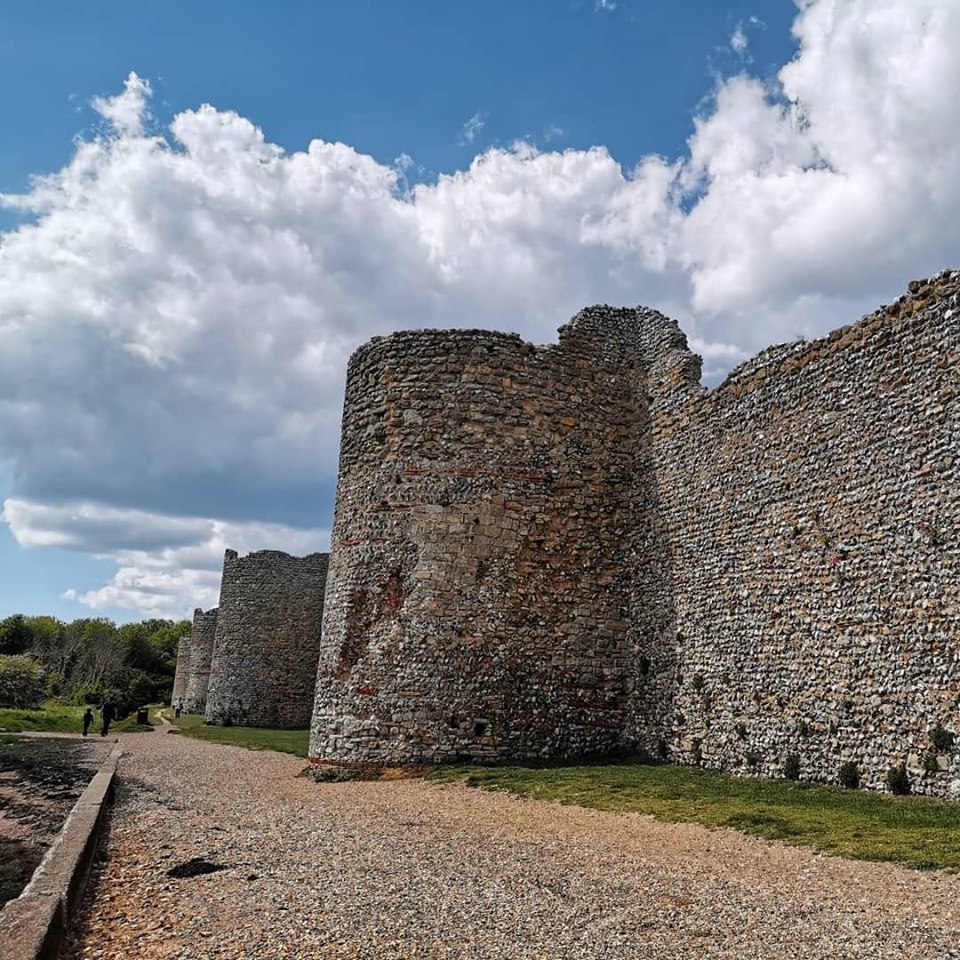 Six centuries later the walls still held and, after the Norman conquest, William the Conqueror granted the land to William Maudit, who reinforced the walls and built within them. Around 1130, William Pont de l’Arche built a stone keep and inner bailey, as well as other buldings to house soldiers. The keep is around 30m high, also making it one of the tallest.

Throughout the medieval period, Portchester was a royal stronghold and was used as an embarkation point for campaigns to France, notably by Henry Plantagenet, later Henry II, who was known to keep important prisoners here. It was also here that Henry met with the Bishop of Évreux who spoke on Thomas Becket’s behalf.

King John used the castle as a hunting lodge for the Forest of Bere and expanded the royal apartments, making them larger and more comfortable. John, too, used Portchester as an embarkation point for Normandy expeditions, including in 1205 and 1213 when he tried to recover Normandy from Philip Augustus, the King of France.

In 1415, King Henry V was preparing a campaign in France from Portchester Castle as part of the Hundred Years’ War. Whilst at Portchester a conspiracy, known as the Southampton Plot, to overthrow Henry was uncovered and the plotters were found guilty and executed. 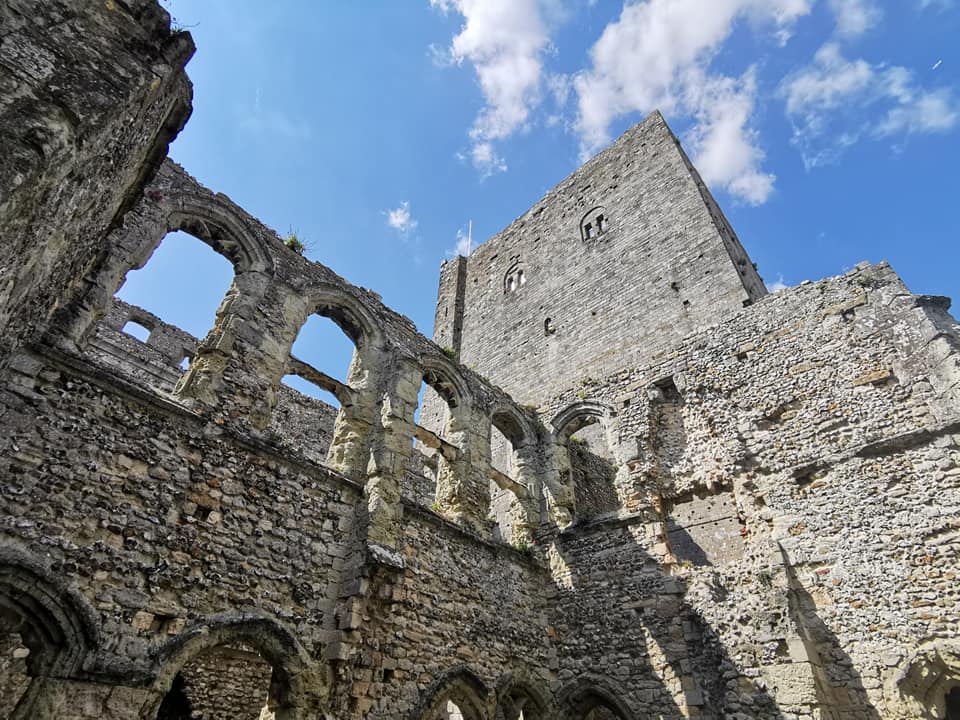 In the 1390s it became a palace for Richard II, who built new royal apartments, rebuilt the great tower, and also added the Landgate entrance. 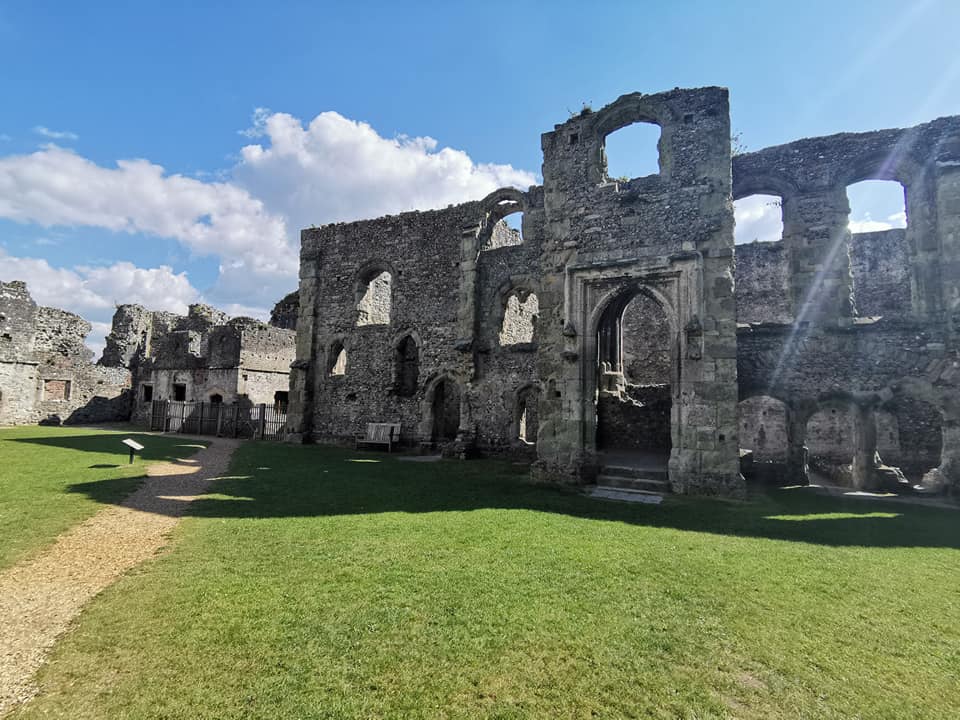 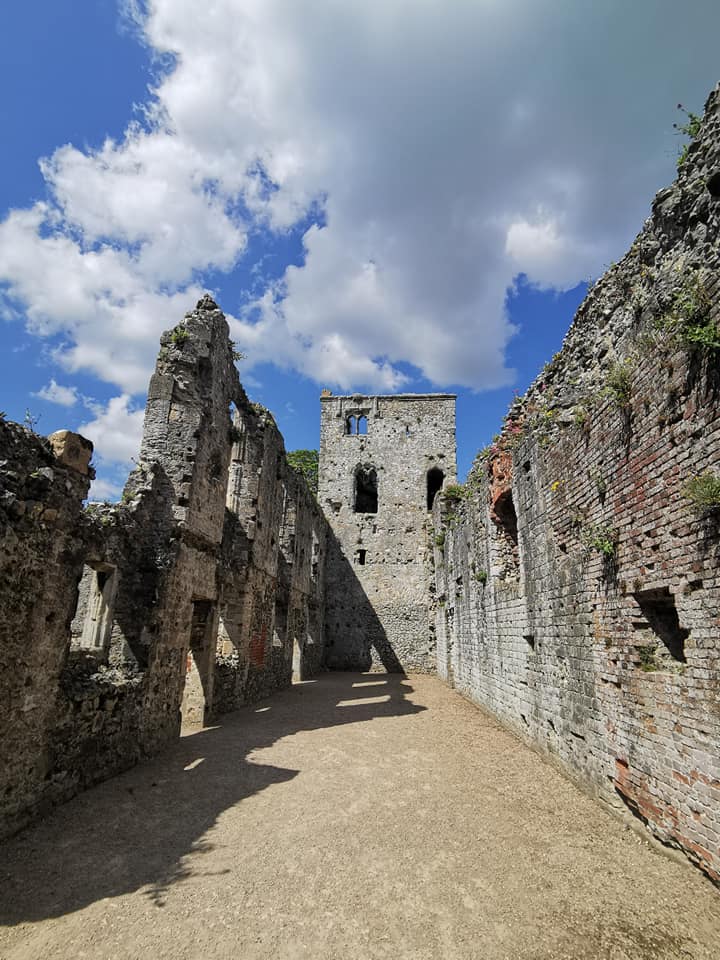 The castle was first used as a prison in 1665, as part of the Second Anglo Dutch War, but really became far larger in the French Revolutionary and Napoleonic Wars, when it housed around 7-8000 prisoners as one of the country’s twelve main POW depots. Prisoners, including men, women and children slept in dormitories, and were fed and clothed. As part of their daily routine they would sell crafts they had made at a small market within the grounds.

Between 1803 and 1811 one of the rooms within the Keep became a theatre for performances put on by French prisoners.

In 1808 at the battle of Bailén, in Spain, a Spanish army who had allied with the British against Napoleon defeated French troops. Around 7000 French soldiers were imprisoned on the island of Cabrera and created a makeshift theatre within a cave. The Spanish could not keep tabs on, or look after, that many prisoners and so a large group (including a theatrical troupe) were sent to Britain, and ended up at Portchester.

The Commander gave them wood, canvas and other materials to build a stage, local people were able to attend as well and often they wouldperform to nearly 300 people! 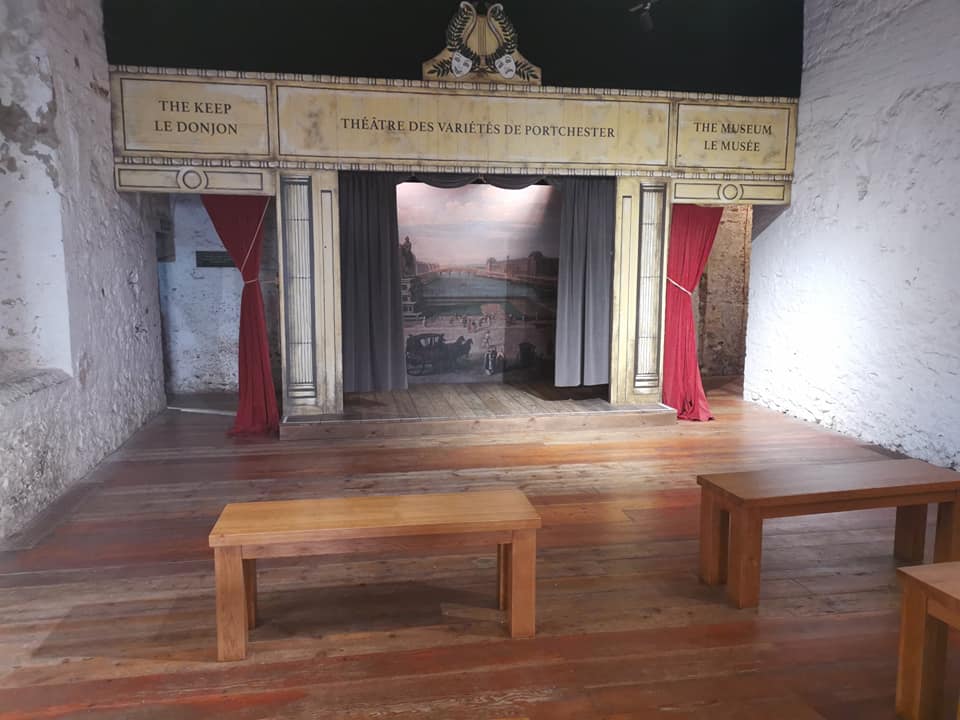 Nearby, French officers were posted at smaller POW depots in Alredford,Bishop’s Waltham and Hambledon, often lodging with local people.

A number of black and mixed race prisoners from St Lucia were also famously held here, and the Keep houses a memorial to them. They arrived in October 1796, many ill or wounded and sent to the prison hospital for treatment. Women and children were taken to Forton Prison in Gosport and their husbands joined later. The prisoners were given extra clothing and ginger in their beer to try and warm them, as it was an incredibly cold, damp environment.

Eventually, they were exchanged for British POWs and sent to France. 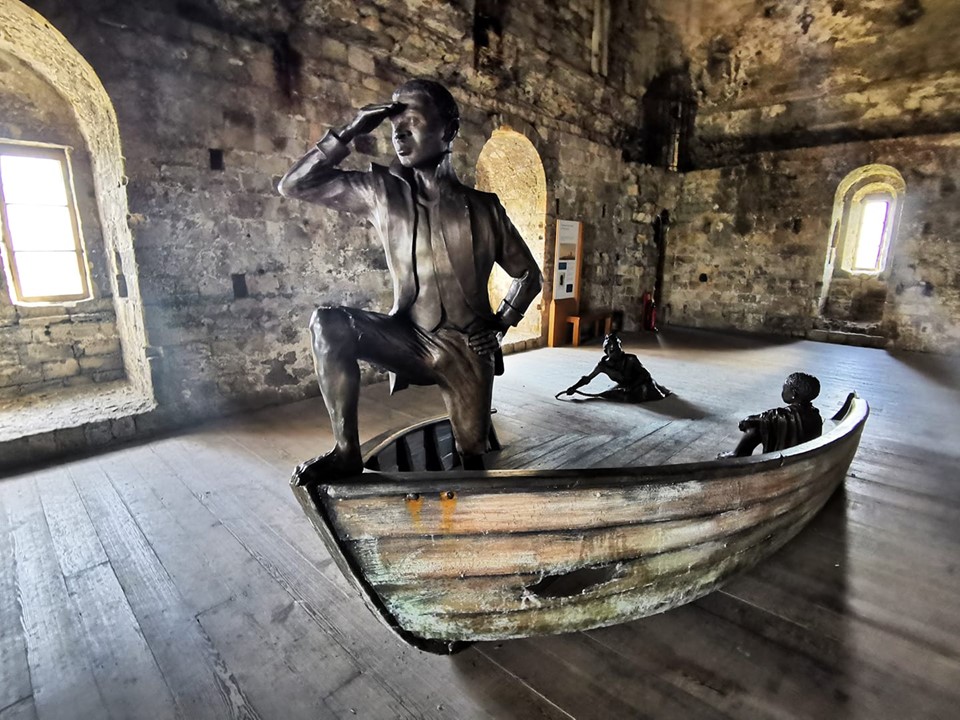 For a full history of Portchester, head over to the English Heritage site!

Portchester is a beautful spot, with wonderful views across to Portsmouth, a lovely walk along the coast and plenty of grass to sit on, on a sunny day. There’s even the odd cricket match played within the Roman walls, if that’s your thing! 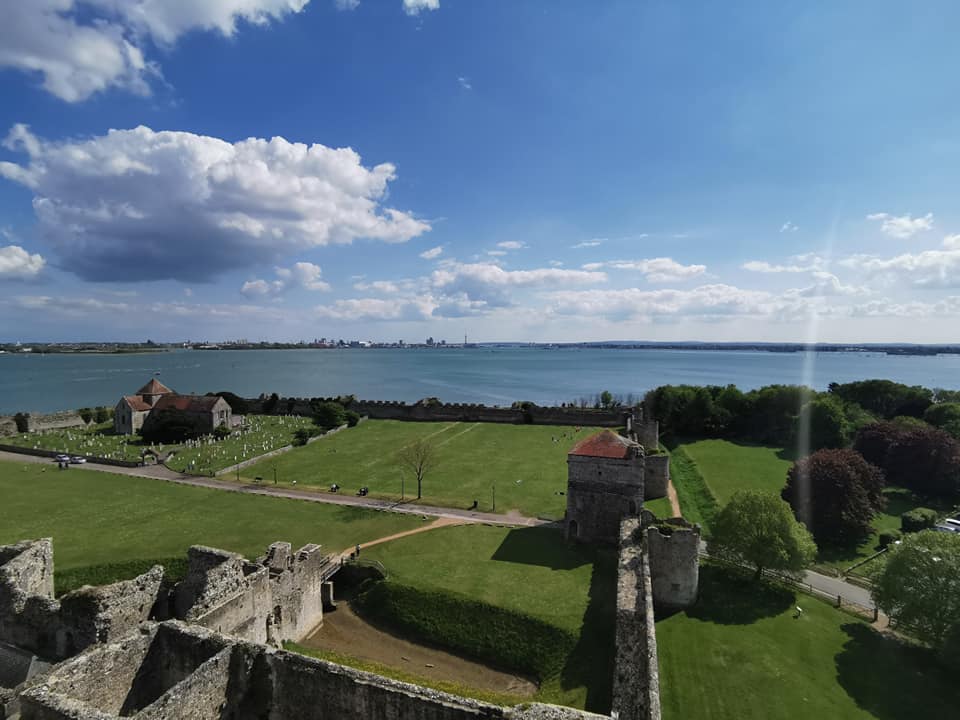 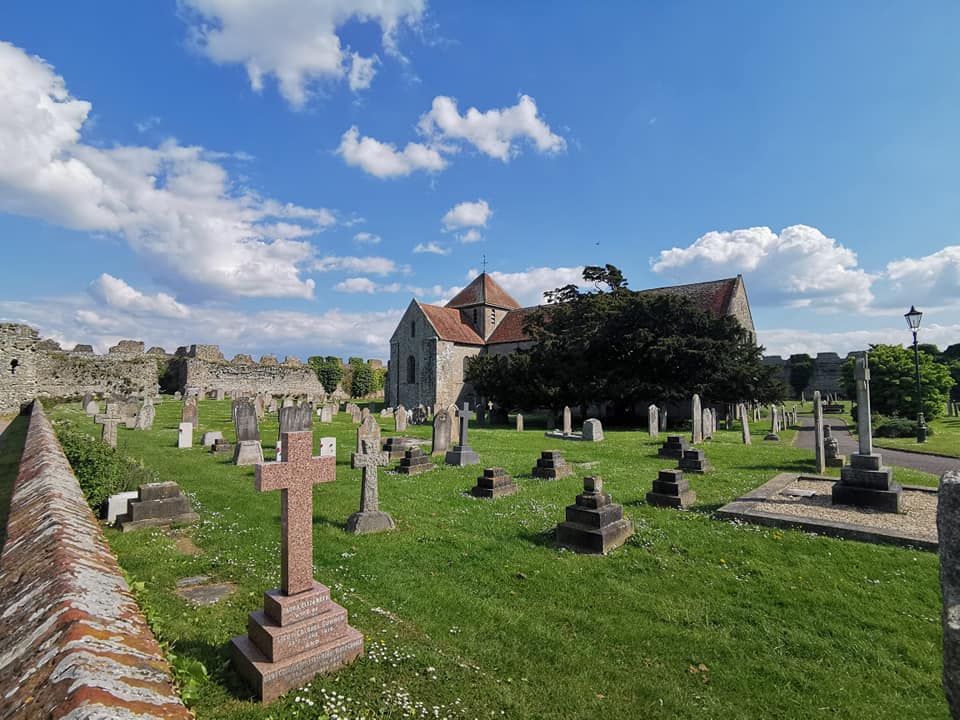 You can walk around the grounds outside the main castle for free, and visit the Norman church and Roman Walls, but to walk inside the actual castle, palace and keep you do need to pay. At the time of writing this post (May 2019) the entry costs are as below!