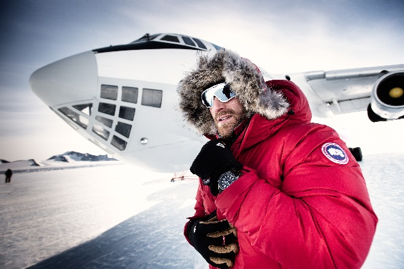 This week, I’m fortunate to be allowed to host an interview conducted by Bremont with one of their Ambassadors, Ben Saunders, on here.

Ben Saunders is a polar explorer and a record-breaking long-distance skier, with four North Pole expeditions under his belt. He is one of three people in history to ski solo to the North Pole, the youngest to do so by more than ten years, and holds the record for the longest solo Arctic journey by a Briton. Since 2001, Ben has skied more than 2,500km (1,500 miles) in the high Arctic. In November 2017, he set out to make the first solo and unsupported crossing of Antarctica. This west-to-east traverse from Berkner Island to the Ross Ice Shelf via the South Pole and the Shackleton Glacier was planned by Ben’s close friend Lt Col Henry Worsley, who nearly completed the expedition before falling ill and passing away in hospital in Chile in January 2016. The journey remains unfinished. 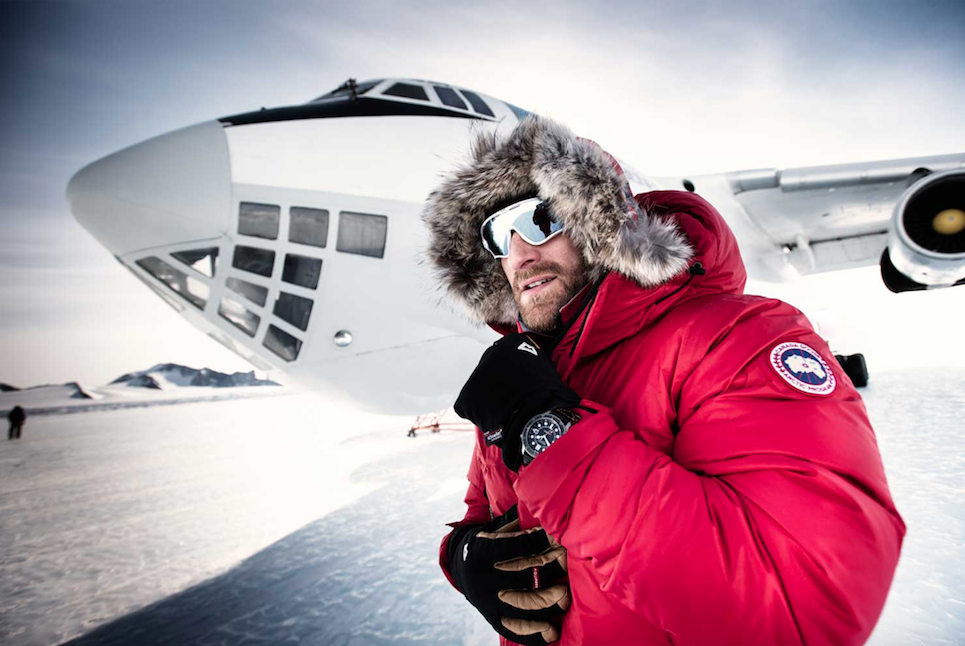 Bremont has worked with Ben for many years and particularly on his last expedition which saw him complete the longest human-powered polar journey in history, an incredible 1,800 mile trip, and for which Bremont developed the purpose built Terra Nova watch. The now sold-out Limited Edition had to be able to withstand the extreme climate conditions of the South Pole, being worn on the outside of Ben’s jacket to serve as a crucial navigational device with its GMT hand. Bremont watches are designed to be fit-for-purpose in the most severe places on earth, they are designed to be Tested Beyond Endurance. To that end the company was thrilled to support Ben’s next venture, the Trans-Antarctic Solo Expedition, and to work with him on the testing and development of the new limited edition Endurance model.

Having walked in the steps of Shackleton and Scott, what have you learnt about their endeavours?

BS: I think it really blew me away, three and a half months in Antarctica walking from the coast to the South Pole and back to the coast again, it hadn’t been finished for a century. Shackleton and his team had done this journey and got close to it back in 1912 so I thought that the journey, literally walking in their footsteps, would give me a great experience and an insight into what it must have been like for them. It left me with an even greater sense of absolute awe, at what they achieved and how far they had got a century ago. It’s physically and mentally an extremely tough journey but we had 21st Century technology and a safety net that didn’t exist for them. When Shackleton turned around he was about 100m north of the pole, it was going to take more than eighteen months travelling to get home, with no communication. The idea that it would take eighteen months to get somewhere and then eighteen months back again, it’s extraordinary. I can’t imagine how isolated they must have felt.

In some ways Tarka (Tarka L’Herpeniere, Ben’s fellow traveller on the Terra Nova Expedition) and I are privileged to have the insight into what it must have been like but in other ways I now feel just blown away at what they managed to achieve and how poorly equipped and clothed they were.

In terms of the kit, how different is your kit compared to Shackleton’s?

BS: In some ways the principles haven’t changed, they had a windproof outer shell and an insulator underneath, they had balaclavas and face masks and fairly rudimentary goggles. In other ways they’re a world apart. A lot of 21st Century technology was actually irrelevant to us, things like breathable membranes in jackets, it never rains in Antarctica so we didn’t need innovations like that. In other ways you’ve got modern fabrics that are incredibly useful – one of the big changes for us was down filled clothes for additional warmth.

What about the weight of the kit, was there a difference there?

BS: Contemporary technology and equipment meant that we could start in a very minimalist fashion. The support teams brought everything they thought we’d need for nearly twelve months, so in some ways it was enormously different but in other ways, the conditions haven’t really changed and so the experiences aren’t dissimilar.

The big game changers are the electronic technology, for example a GPS, which makes an immense difference. Previously they had to do really complex calculations to determine their position, whereas we had accurate information.

Lastly, of course, satellites. I think you always assume that having a phone and being able to send and receive emails makes things easier, but I think it’s a double-edged sword. If you’re not careful it can exacerbate home sickness and that feeling of isolation. However, you are able to share the stories with friends and family and I could answer questions from school kids following my journey, which I loved.

How long would preparation for this sort of trip take?

BS: Thinking back to 2013, it was several years of preparation building up to the departure. There was about nine to twelve months of training and preparation including expeditions in Greenland, testing our equipment, clothing, food as well as a year of the physical training itself. You really have to be a weird fitness jack of all trades because it’s basically an ultra-endurance event. In 2013 we covered 69 marathons back to back. I guess on the surface it seems quite simple, it’s two guys dragging a sled for several months and in other ways it’s incredibly complex and you’re so reliant on every bit of equipment, every bit of clothing. Even the smallest thing is quite stressful and you’re always aware that the expedition is only as strong as the weakest link.

Is the diet preparation quite meticulous?

BS: One of the funniest parts about preparing is fattening up beforehand, I put on 10kg, which sounds wonderful but it’s really frustrating when you’re feeling really fit and you have to deliberately over eat. Ideally you want to put on fat because it stores energy. There’s a lot of thought and work that goes into that because ultimately, it’s an endurance challenge, you will lose a lot of weight throughout the duration and you need to prepare for that.

As far as performance goes, these long self-support expeditions are about as tough as it gets in terms of endurance. Often after nine, ten, eleven-hour days, there’s not much energy left so nutrition is extremely important. It’s always evolving, always changing.

Besides the obvious essential kit, what other equipment did you take with you?

BS: One of the strange things about doing this is that you have 24 hours daylight, so there’s no obvious difference between night time and day time, the sun is high in the sky the whole time so it’s very confusing.

It’s entirely optional what time zone to work in because it’s 24-hour daylight. I opted to work on UK time just to make things easier with communications and so I didn’t get jetlag. When your entire life and routine is governed by time it is hard to know where to start, or where to stop. Therefore, having a watch that you trust is vitally important. It is obviously crucial that you can tell the time when you have no idea what time of day or night it is.

The conditions are some of the toughest and extreme on the planet with temperatures going as low as -48. Anything with a battery (GPS or cameras etc) have to kept relatively protected so they tend to stay in the pockets of your jackets, but the watch had to be accessible and therefore it was on top of my jacket. This meant a mechanical watch was really the only way of timekeeping for me.

Did you have much involvement in the way the Bremont Endurance watch was designed?

BS: Yes I did, the Endurance is an evolution of another limited edition Bremont watch called the Terra Nova which was developed back in 2012 for my first South Pole expedition. The Terra Nova had proved very reliable, so we thought that was a good starting point to build on for the next timepiece.

There are two things that I asked Bremont for and I felt they were both important. The first one was having a 24-hour hand, a separate hand sweeping the dial in 24 hours. That helped enormously with navigation. If you’ve got a watch with a 24-hour hand then you point that at the sun and midday is point north, it’s as simple as that. You can use it to navigate, it’s very straight forward and a vital piece of kit for me.

The second thing came down to my obsession with saving weight. I’m travelling under my own personal power so the less weight I’m carrying with me the better. Therefore, the watch was made using Titanium which is extremely lightweight yet very robust.

In terms of when you get back from an exploration, what do you miss the most?

BS: In some ways the grass is always greener. I spend months and years getting really excited about these big explorations but without fail every expedition I’ve done, as soon as I start I can’t wait to get home.

It’s the most basic things, you miss sitting in a chair, eating with a knife and fork, drinking water out of a tap or even being able to walk outside without a face mask to protect you. It’s funny how there’s always the initial few months where everything is amazing when you get home. You take everything for granted so quickly again and before long you’re fed up as you’re flying to New York and the WiFi on the plane isn’t working! It’s amazing how fast you adapt. 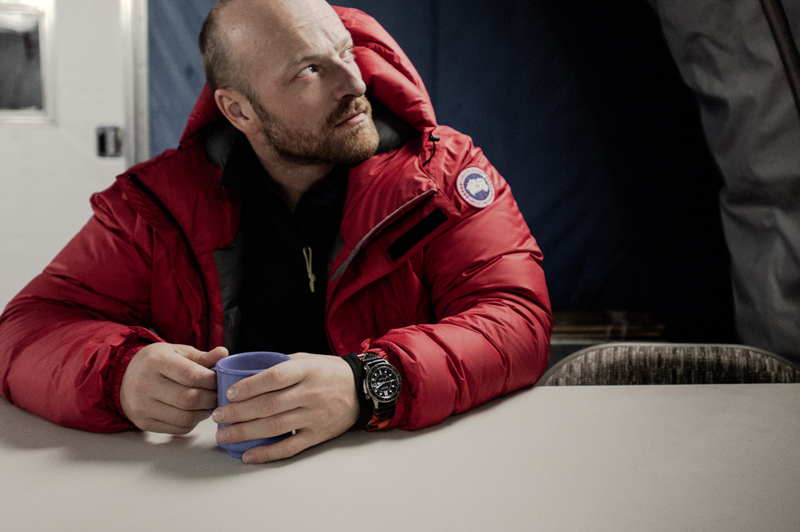 Is the biggest danger on an exploration like this the temperature?

BS: Yes, it’s the conditions. It’s an extraordinary place, it’s as close as I can imagine to being in space. You’re in an environment that without the correct equipment you’d be dead in a few minutes. It’s about as extreme a climate you can get. It’s not really conducive to a life of any sort and that’s why there’s nothing in it, no animals, no wildlife, there’s nothing living down there.

It’s a harsh and hostile environment and that’s the biggest danger. It can feel quite intimidating when the weather is bad, you can get wind chill and it gets very risky. You become aware of the consequences of tiny mistakes and particularly being on my own there for a few months last year, just putting the tent up in a storm for example – you’re holding onto it and trying to get the poles fixed. If I slip and let go of the tent I would be in real trouble.

What would be the ultimate exploration for you?

BS: In some ways it was the journey back in 2013-2014, which was finishing the trip that Scott and Shackleton had done. It was the longest ever polar journey on foot, so I’m really proud of that achievement.

In other ways, I feel like I’ve only scratched the surface in terms of my own personal goals and I’m more interested now in telling the story. Particularly for Antarctica – there are a few plans in place to take groups of people down there, especially young people and introducing them to it through the story of Scott and Shackleton. That’s the next project for me, it’s probably a couple of years off yet but watch this space.