There are so many phrases used in everyday life, and we never stop to think how they materialised. I find a number of people, myself included, using terms originating in the navy and at sea, but so many of us are unaware of their background…

I thought it would be interesting to delve in to this and see how many of these you were aware of, and it also sets off my naval theme leading in to October.

Starting with the above, ‘batten down the hatches’ is usually used on land when we have a storm coming and we need to prepare. At sea? The openings on board the deck were known as hatchways and the cover was known as the hatch. These would be shut and covered with canvas secured by a batten (piece of wood) to prevent water finding its way in to the ship. 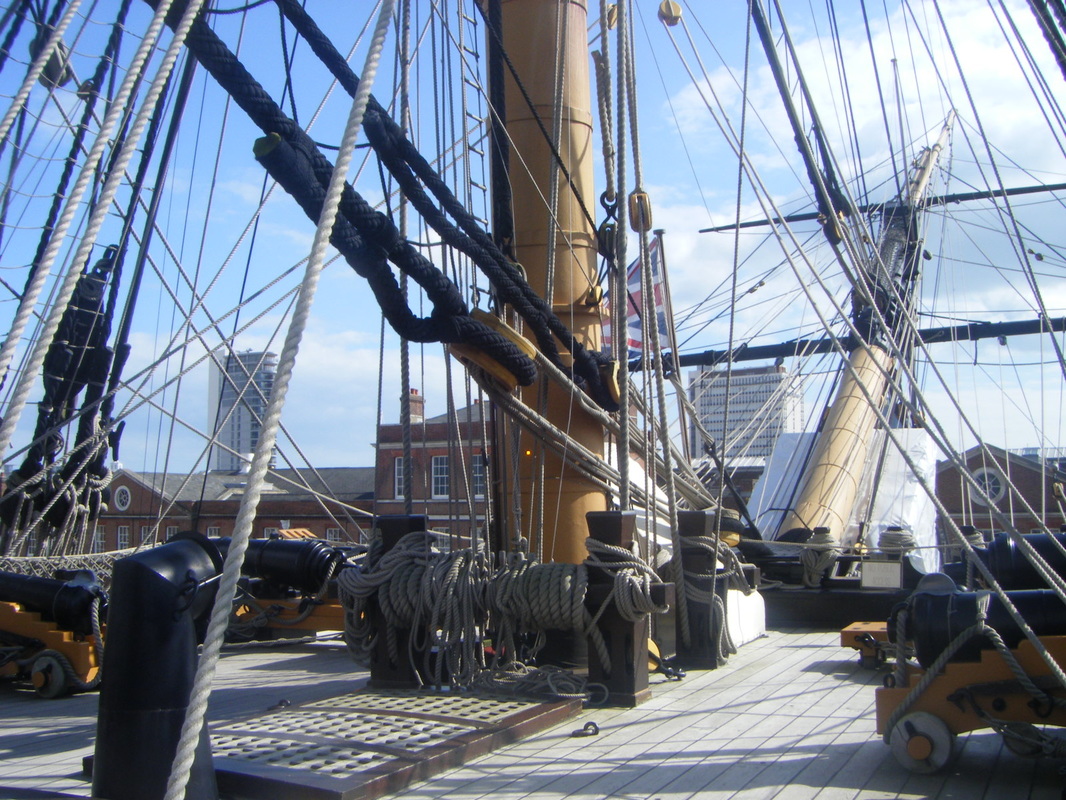 This is actually the merging of two separate phrases. Ship shape meaning to be kept tidy at all times and Bristol fashion, referring to the fact that the tides were highest and lowest at Bristol. At low tide on the River Avon ships would often be beached, and were therefore required to be sturdy and to have all items on board stowed away. This would avoid items moving around when the vessel was aground.

Quite often when starting a new job we are told that we will initially be ‘learning the ropes’.

Tall ships have miles of ropes, used to adjust and hoist the sails as well as supporting the masts. All of these had different names, and so when a young seaman had managed to remember all of these, it was said that he had ‘learned the ropes’.

Not enough room to swing a cat

Generally used to describe a very small room or space, the origin of this phrase was related to a naval punishment.

The space between decks on a naval warship at the time was very small and cramped (which you will be aware of if you’ve ever set foot on HMS Victory). This punishment of a flogging with a cat o’ nine tails was undertaken on deck, as below there was ‘not enough room to swing a cat’

On board a ship, the crew were separated in to ‘messes’ and each mess would choose someone to collect the rations, taking them to the cook and then collecting the finished meal. On a large ship a boatswains call was used to alert the crew when meals were ready, and so when the boatswain piped the dinner call, they knew their food would be piping hot.

This leads me nicely on to my next phrase…

This phrase has two possible origins. The most popular is that naval issue plates used to be square. Simple really. The other related to a meal being a good deal, or ‘fair and square’.

Cannons were usually mounted to a four wheel gun carriage as above and on a track, meaning it was quicker and easier to run them out and back. The guns were secured but on occasion were known to break free, in poor weather as one example.

​Out of control or ‘loose’ these cannons, often weighing upwards of 6000lbs would cause a lot of damage.

The sun’s over the yardarm

A popular phrase now taken to mean that it’s an appropriate time of the day to start drinking.

In the navy, sailor’s used to be given a ration of around 8 pints of beer a day. Officers did not generally drink beer and so they had to wait for their rum ration, usually given between 1000 and noon. In the northern hemisphere this was at around the same time as the sun passed the top yardarm.

Give them a wide berth

When a ship is berthed it is secured and moored alongside.

​With tall ships, a ship was seen to be berthed when at anchor, preferably far enough away from shore and the harbour mouth. Tall ships used the tide and wind to their advantage when berthing and so to avoid other ships already at anchor they gave them a ‘wide berth’ thereby avoiding a collision.

These are only a handful of phrases and I’m sure that if you Google search you will find so many more.

Which phrases did you realise had a nautical background?