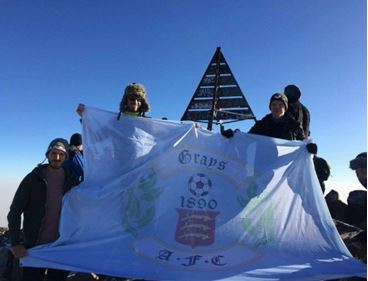 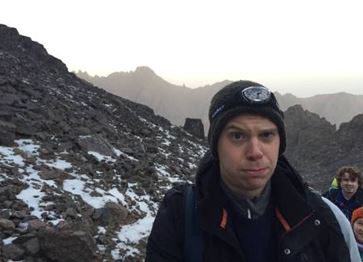 Yep, that’s me, September 2017, 4000M up the side of a mountain, feeling woozy as hell, and trying my hardest not to black out… with a stadium flag from a sixth-tier football club in my backpack, what the hell am I thinking?

Well, as is the case with many in the summit nabbing community, I have my reasons….

Well, the chain of events that led me to be on that very mountainside in 2017 started back in 2014, and actually if I was to look at the broader picture, years before that even, because it was my Grandad’s diagnosis of Parkinson’s Disease which spurred myself and a few friends to take on a fundraising challenge for the cause. It’s a very peculiar thought, to think back and remember when I first noticed my Grandad’s unsteady hands, years before his diagnosis, and that years later they would be the genesis for all of the great adventures and challenges I have taken on with my friends.

If anyone wanted an example of ‘the butterfly effect’ then that is surely it.

The first few years of his diagnosis were difficult for the family, he was a confident and capable man – certainly ‘the head of the family’ 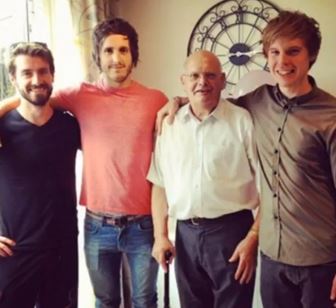 I’m not too sure why I chose to hike Snowdon as a fundraiser, but we raised in excess of £1000, and returning back to my grandparents house to share the photos, and stories of the trip was just brilliant; my Grandad had been busy fundraising on our behalf, and gave us plenty of advice and stories of his own from when he undertook his military training on Snowdon.

In the two years that followed, we made 4 further summits (Scafell, Ben Nevis, Cadair Idris, and Monte Bronzone in the southern Alps) and with each one my Grandad followed our progress with keen interest, and as an avid storyteller himself, loved to hear of our exploits, achievements, and obviously laugh about our hapless mistakes… of which there are many!

It was just months after we made the summit of Bronzone that we received the news that he also had lung cancer, which had been caused by inhalation of asbestos in his early working life. 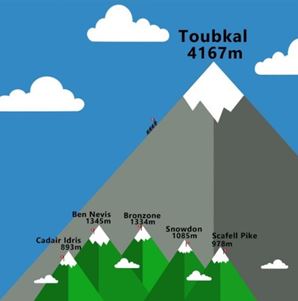 We were told this would be a difficult year, and indeed it was. So, we did the only thing we really knew how to, and booked up a mountain that would push us to our limits… and when we mocked up this to-scale illustration, we started to wonder what the hell we were doing!

We had it in the diary so there was no turning back. Booked in for September, we set up the JustGiving page, this time for Macmillan, and set about training…

As September approached, it was very clear that my Grandad was in a deteriorating state, admitted to a hospice in the August, he was still asking about our preparations and plans, at every available opportunity.

Sadly, just a week before our flights, he peacefully passed away.

It was a complete body blow, and yet gave me the determination to reach the summit of Toubkal, and wave his football teams flag (as an adventurer, I was pretty certain I could claim to be the first person to fly the Grays Athletic FC stadium flag, atop Mt. Toubkal) and so we’re now back to where we started.

On my way up to the Toubkal Ridge.

It was an emotional hike, and one I will never forget, as we approached the summit, turning right off the ridge, I shed a few tears, and reflected on the past years events. Despite being in a different continent, and over 4000M above sea level, I felt closer to my Grandad than ever before. My nan had given me his St. Christopher neck chain for the hike, which was as synonymous to my Grandad as his black briefcase. It clearly did the job, and will join me to all future summits, to give me that determination to push on against my limits.

An interesting observation, that a trinket just like this, can have such a powerful (and real) influence on someone’s performance, from a lucky bag, to my treasured neck chain, almost anything goes when it comes to finding sources of courage, motivation, and even solace.

It’s not the case for everyone I’m sure, but we all have our reasons for hauling our bodies up to the top of very high places and back down again, and it’s been a pleasure to share with you mine. 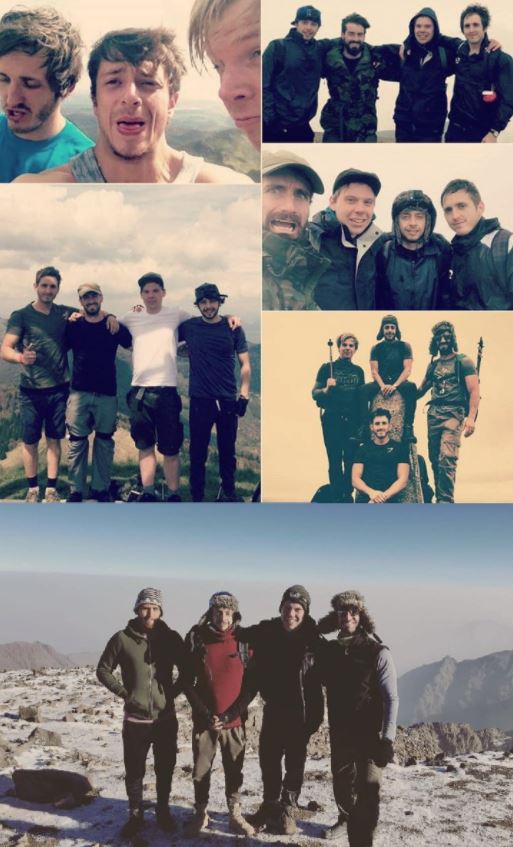