I’m a firm believer in being a well rounded individual. No, not eating all the cake I can get my hands on (though who doesn’t love cake?!) but having many strings to the proverbial bow, as it were.

So, when I was in Gibraltar last week, I made the most of my short time on the Rock, and tried to get to as many of the historical spots I wanted to see as I could. If you’re in to your military history, especially naval, then there are few places better to visit…

After being ceded to Britain forever in the Treaty of Utrecht over 300 years ago, it has continued to remain important, not least strategically but, at least in the first 15 years of signing, as a thorn in the side to the Spanish.

Gibraltar at the time was unable to accommodate a fleet. A problem for Britain, as to keep our maritime power, we needed to have a naval presence in the Gibraltar Strait – a key chokepoint and the point at which the Atlantic and Mediterranean meet. Prior to the Treaty of Utrecht, the Royal Navy preferred the use of ports such as Tangier or Cadiz. After the treaty, and with the navy now able to use both Minorca and Gibraltar, it gave a perfect opportunity for a way to keep the French at bay and threaten Spanish interests.

After Horatio Nelson‘s victory at The Nile restored British dominance in the Med, the importance of Gibraltar was realised moreso. Not least as a logistical supply point, but also as an operational centre from which to maintain an empire.

Rosia Bay, the only natural harbour in Gibraltar, was the site of the Royal Navy victualling yard, where vessels could anchor in order to receive supplies. After the Battle of Trafalgar in 1805, HMS Victory was towed in to Rosia Bay dismasted, with the body of Horatio Nelson who was sadly killed in battle, on board. 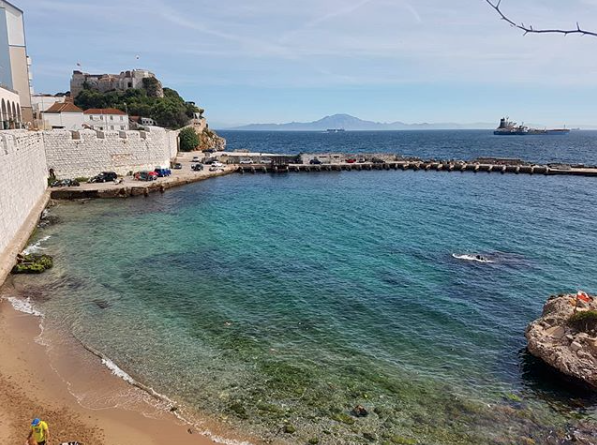 The cemetery is just outside the old city walls, in a section of the Southport Ditch, part of the southern defences of the city. Consecrated 7 years before the Battle of Trafalgar, it was used for the burial of those who died in battles at sea, or of ailments including yellow fever or infections post injury in battle.

Despite being named the Trafalgar Cemetery, there are only 2 sailors who died due to the battle buried there. The majority of those who died in battle were buried at sea. 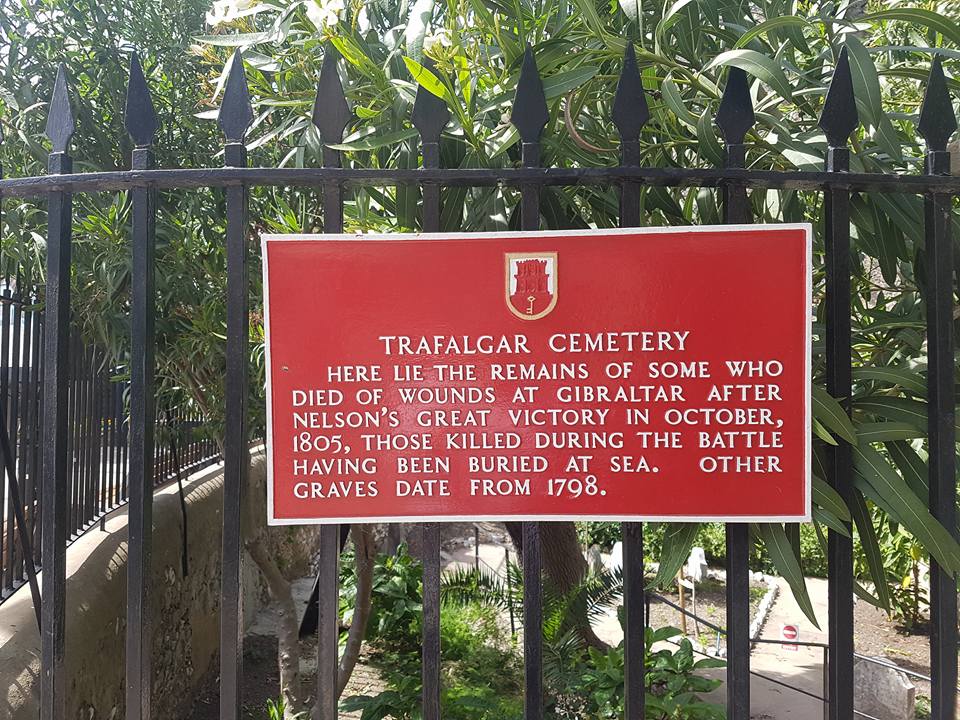 One of the victims from the Battle of Trafalgar was Royal Marine Captain Thomas Norman of  HMS Mars, who died in the Naval Hospital on 6 December 1805 at the age of 36. 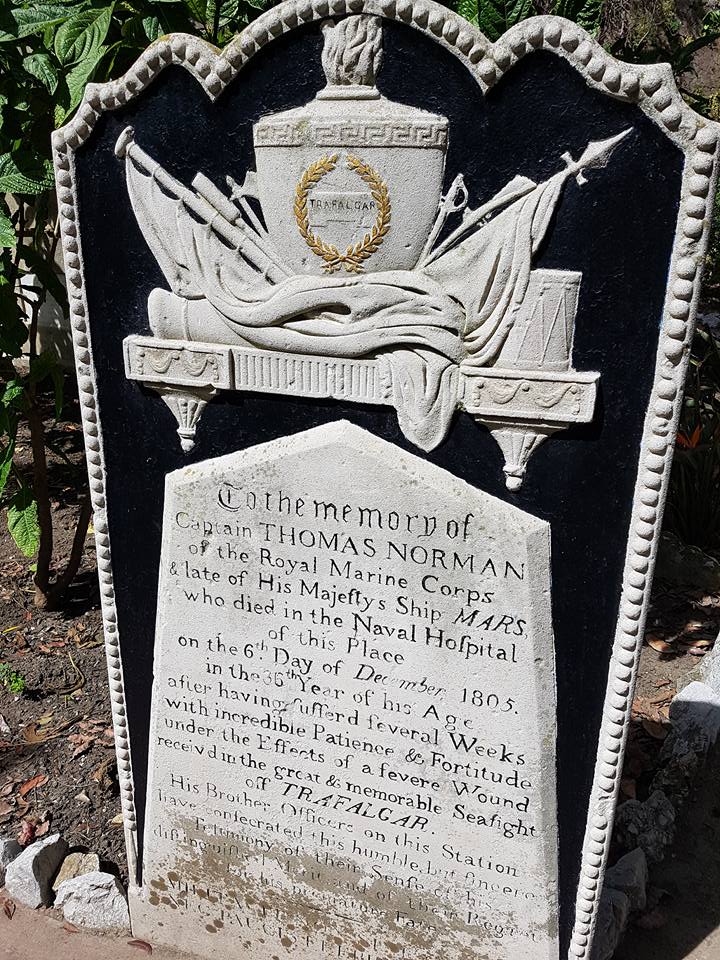 The other was Lieutenant William Forster of HMS Colossus, who died of wounds received in battle on 21 October 1805 at the age of 20. 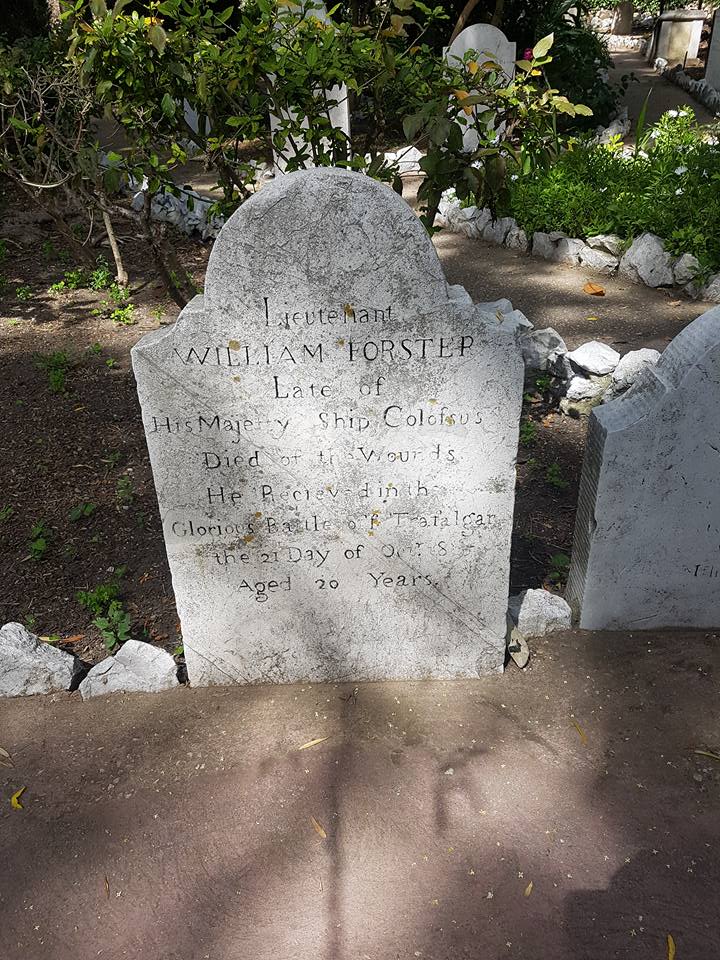 One of the most peaceful, tranquil cemeteries I’ve visited, filled with greenery and tropical flowers. You almost forget that it’s surrounded by busy roads. 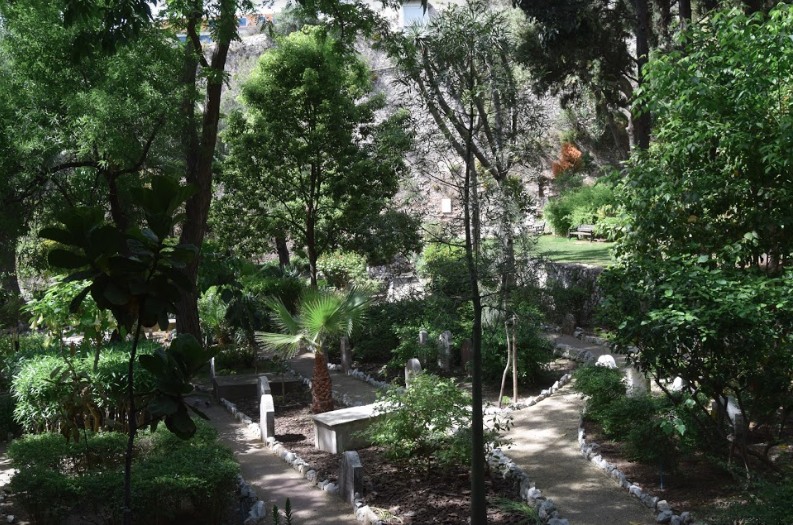 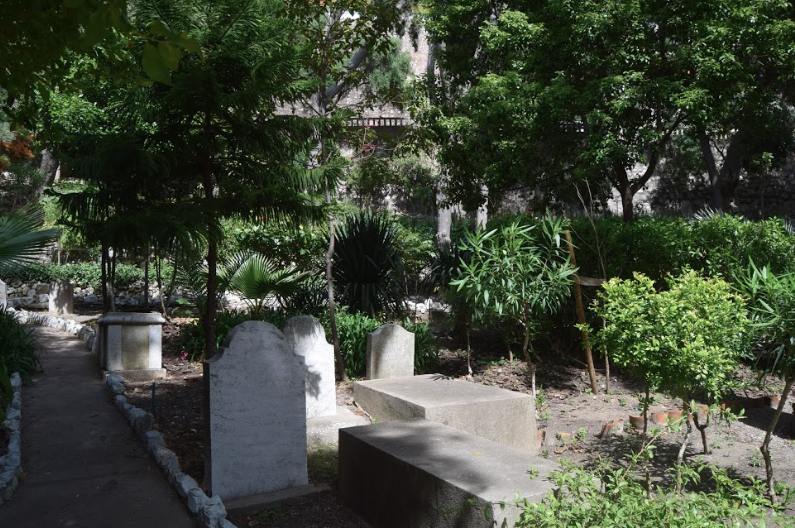 Within the Trafalgar Cemetery is a memorial to the Battle of Trafalgar, including an anchor donated by the Royal Navy, as well as an inscription of a quote by Collingwood, who reported both on the British victory over the combined Franco-Spanish fleet at Trafalgar and the death of Horatio Nelson.

Annually on or around Trafalgar Day, a memorial service is held here. 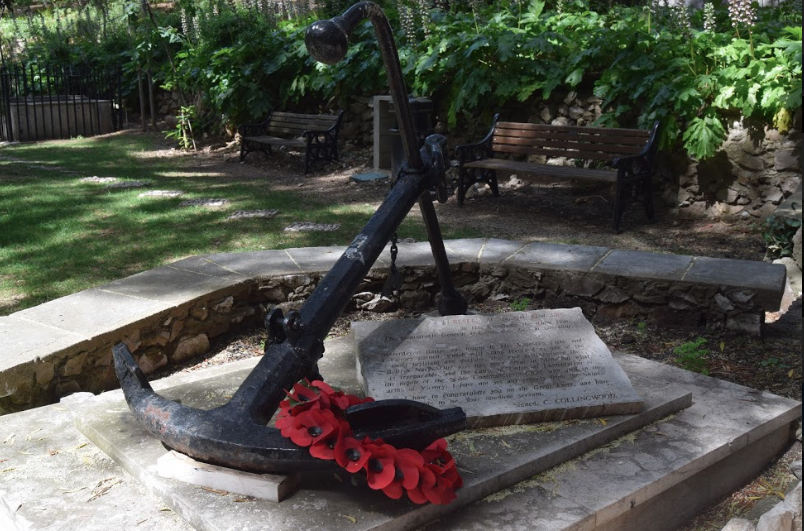 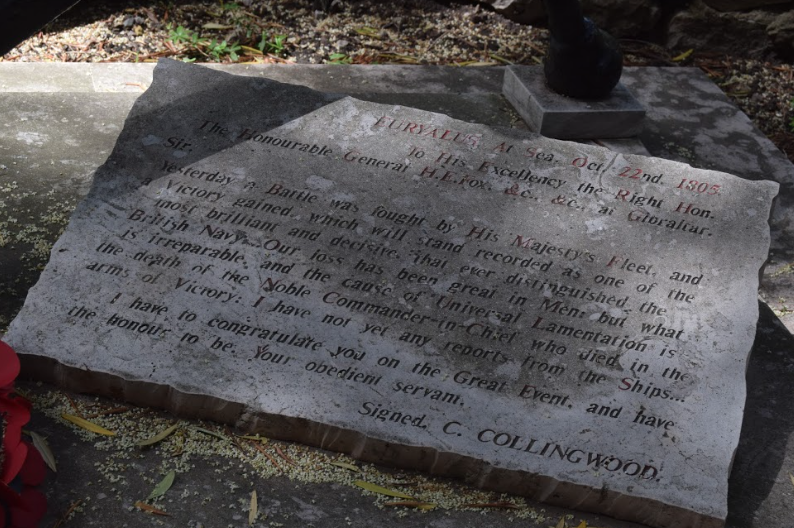 Across the road from the cemetery stands a life size, bronze statue of Horatio Nelson, erected in 2005 to commemorate the 200th anniversary of the Battle of Trafalgar.

Originally this part of Gibraltar was built on sand and from 1160, it was used as a landing for galleys. This continued as the Spanish took hold of the Rock but, facing struggles with foundations sinking in to the sand reclaimed from the water, when the British took control of Gibraltar, after the Great Siege, they constructed bombproof barracks.

This eventually gave way to becoming a parade square, also used for public executions (and a whirligig). 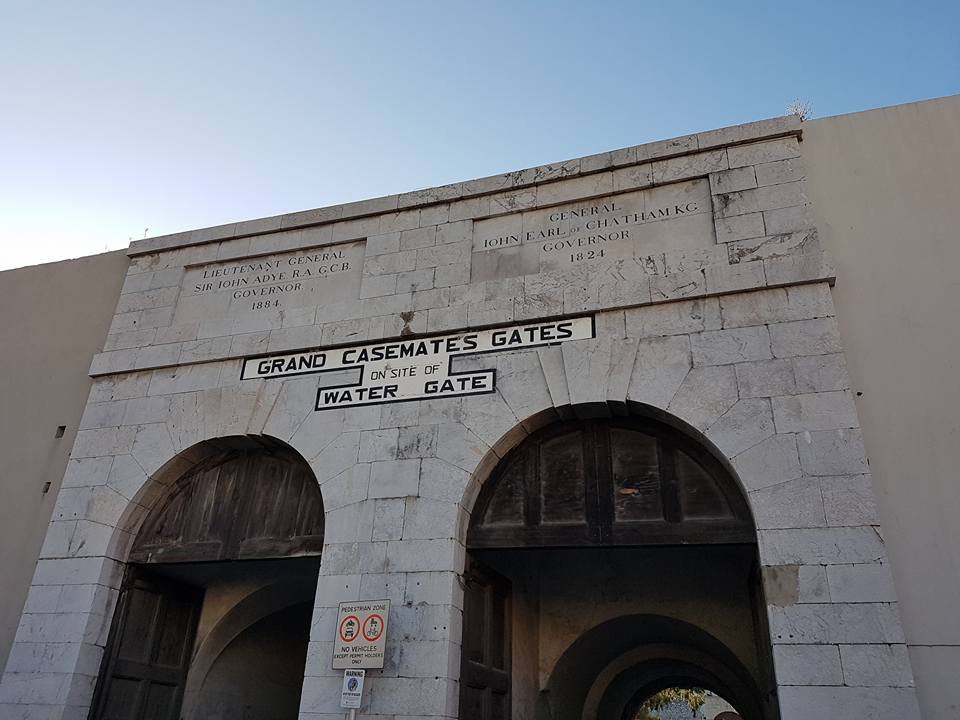 Much of Gibraltar is reclaimed outside of the old walls, and this would have all been water at one point in time.

Commander of the allied naval forces at the capture of Gibraltar in 1704.

This monument was erected to honour the link between Gibraltar and the Royal Marines. In 1704, British and Dutch marines went ashore and laid siege to the garrison of Gibraltar following a naval assault. Post capture, the marines formed the largest contingent on the Rock and took part in almost all of the fighting with Spanish and French forces.

The marines, initially created from regular army units, were authorised in 1664 by King Charles II to be recruited by the Duke of York and Albany for service with the British fleet.

Awarded the title Royal in 1802, they fought in so many actions around the globe that King George IV decided that their colours should bear the symbol of ‘the great globe itself’ and that the only battle honour on the colours of the Royal Marines would be that of Gibraltar. The emblem is now known as the famous ‘globe and laurel’ 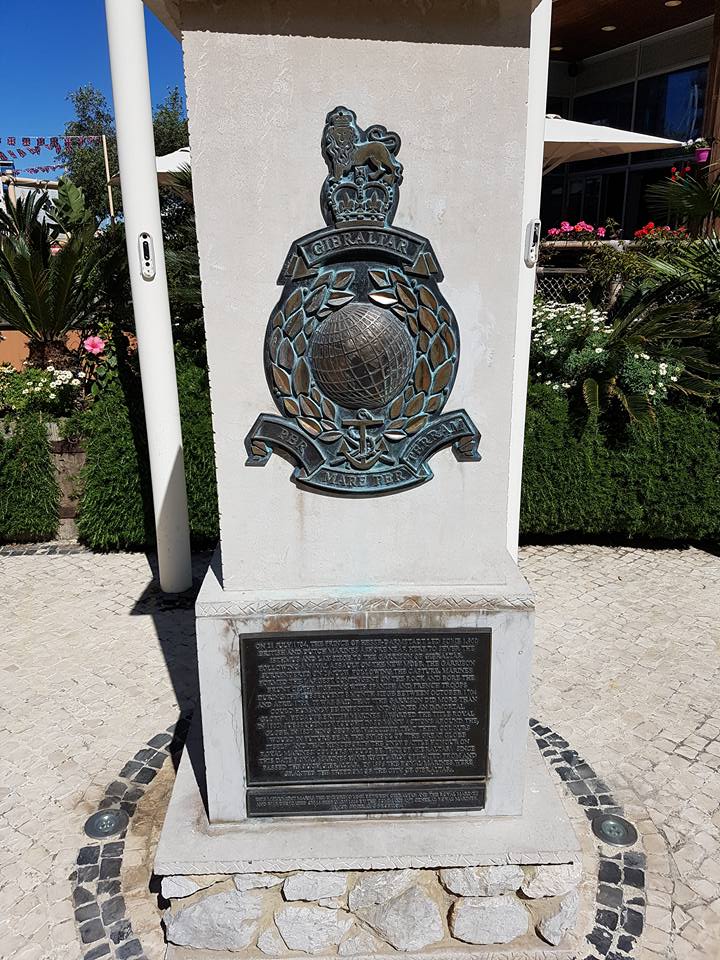 Gibraltar’s military and naval heritage is all around you. From pubs to roads, Trafalgar and Nelson are prevalent and the red plaques denoting key moments in the Rock’s history are everywhere you turn.

I’m sure there was far more that I missed, but with only one day to see everything, I was somewhat limited. If you know of anything I should have seen, let me know in the comments!