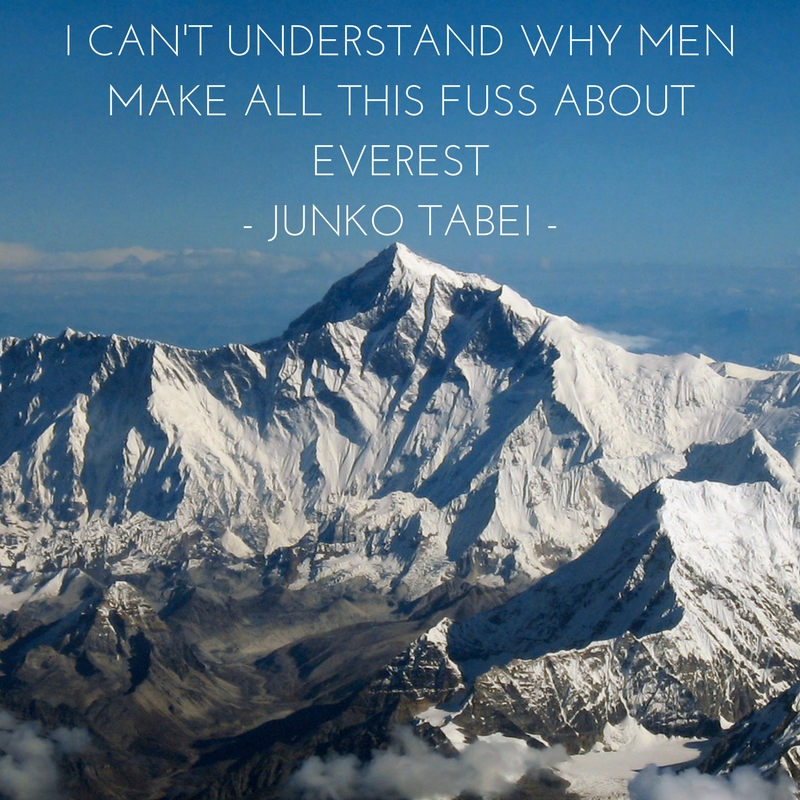 A couple of years ago I wrote a post on women who inspire me, but this year I thought I’d share some of the words of wisdom that I either live by, or think the world should be aware of. All by inspiring women. Some adventurers, some people who have careers I wish to emulate, but all wonderful in their own ways!

Maybe you’ll take something away and feel inspired too!

Junko Tabei was the first woman to reach the summit of Mount Everest in 1975. Before Everest she climbed the Matterhorn and Mt Fuji. She was the first woman to climb The Seven Summits and formed the Ladies Climbing Club of Japan, as a result of how she was treated by male mountaineers of the time.
Men refused to climb with her, thinking she was only doing it to find a husband… 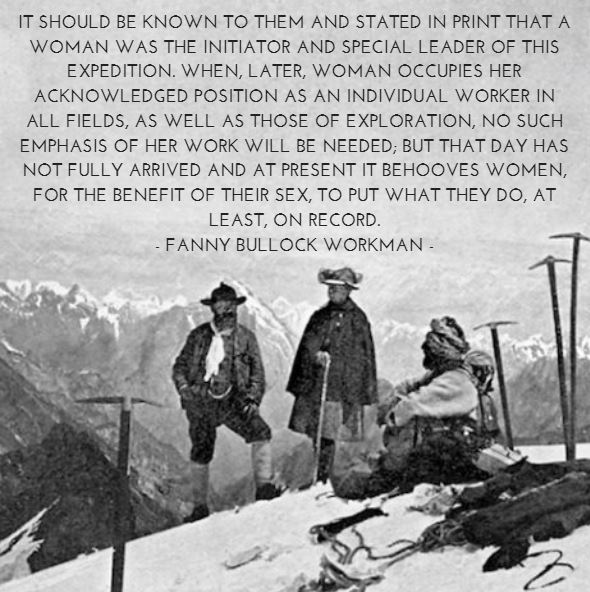 Fanny Bullock Workman was an American geographer, cartographer, explorer, cyclist and mountaineer. She set multiple female altitude records, including Pinnacle Peak, and was one of the first women to explore the Himalayas. She was also the second woman to ever speak at the Royal Geographical Society. She showed that women could climb at altitude just as well as a man and helped break down the gender barrier in mountaineering. 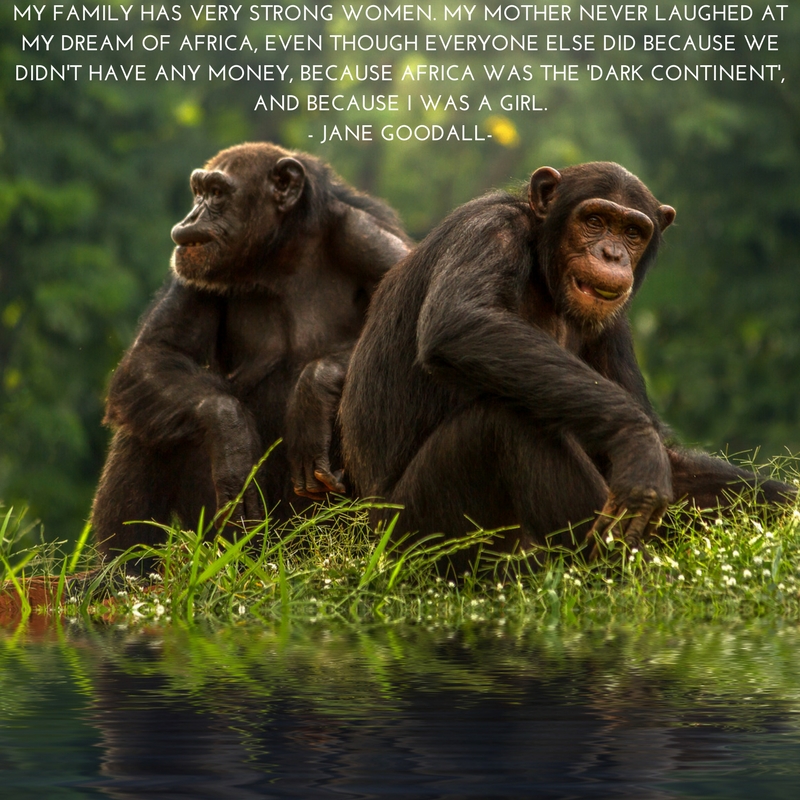 Jane Goodall is an English primatologist, ethologist, anthropologist, and UN Messenger of Peace. She spent 55 years studying social and family interactions of chimpanzees in Tanzania. 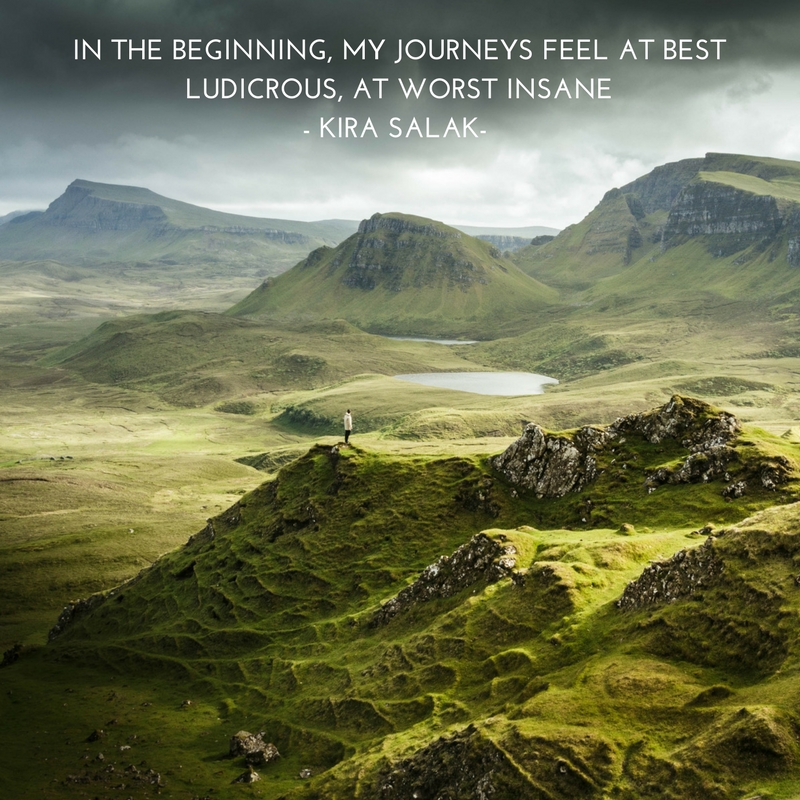 Kira Salak… American adventurer, writer, journalist, the first woman to cross Papua New Guinea at only 24 and also the first person to kayak the 600 miles of the Niger River to Timbuktu solo. 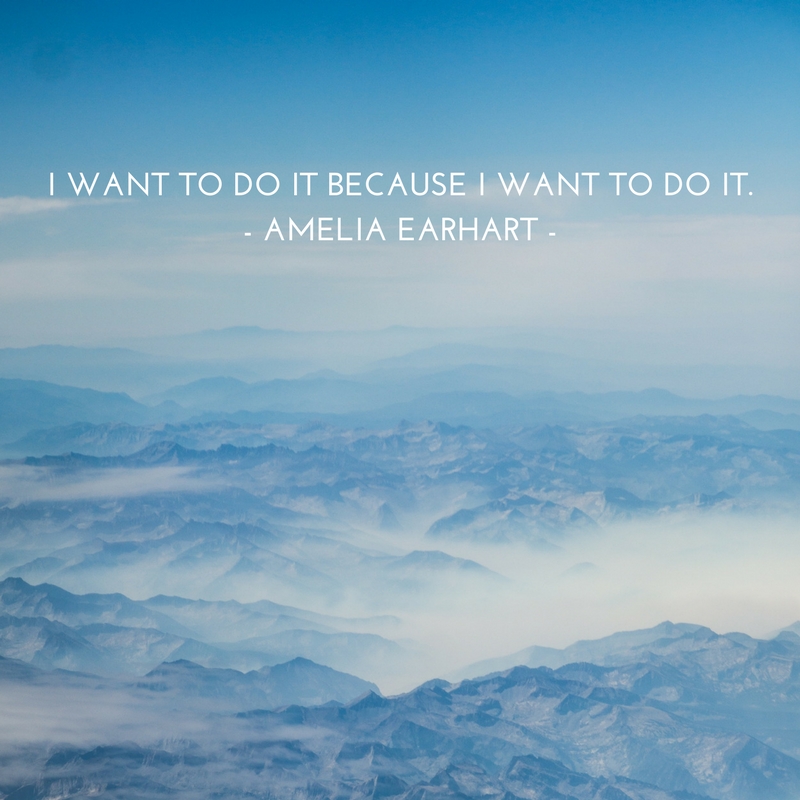 Amelia Earhart disappeared in 1937, whilst making a circumnavigation of the globe. She was the first female aviator to fly solo across the Atlantic Ocean and received the U.S. Distinguished Flying Cross for this! She set records,wrote books and was instrumental in the formation of The Ninety-Nines, an organisation for female pilots. 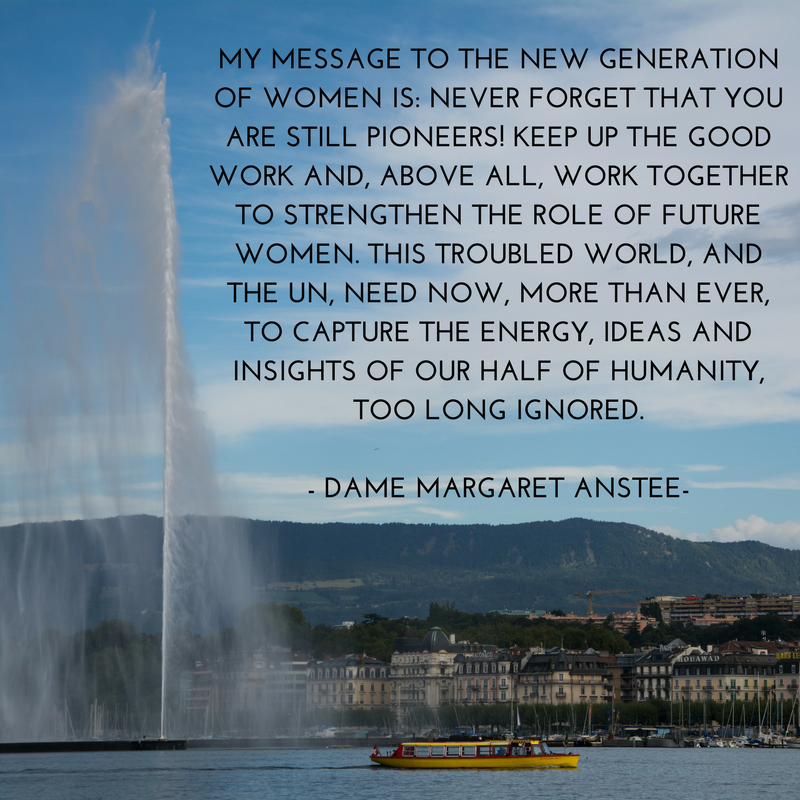 Dame Margaret Anstee was with the United Nations for about 40 years and became the first Female Under Secretary General. She was Director General of the UN in Vienna, Special Representative for Angola and head of UN Peacekeeping Ops there. She didn’t let the very male dominated environment at the time affect her. ​Her book ‘Never Learn to Type: A Woman at the United Nations‘ is inspirational. 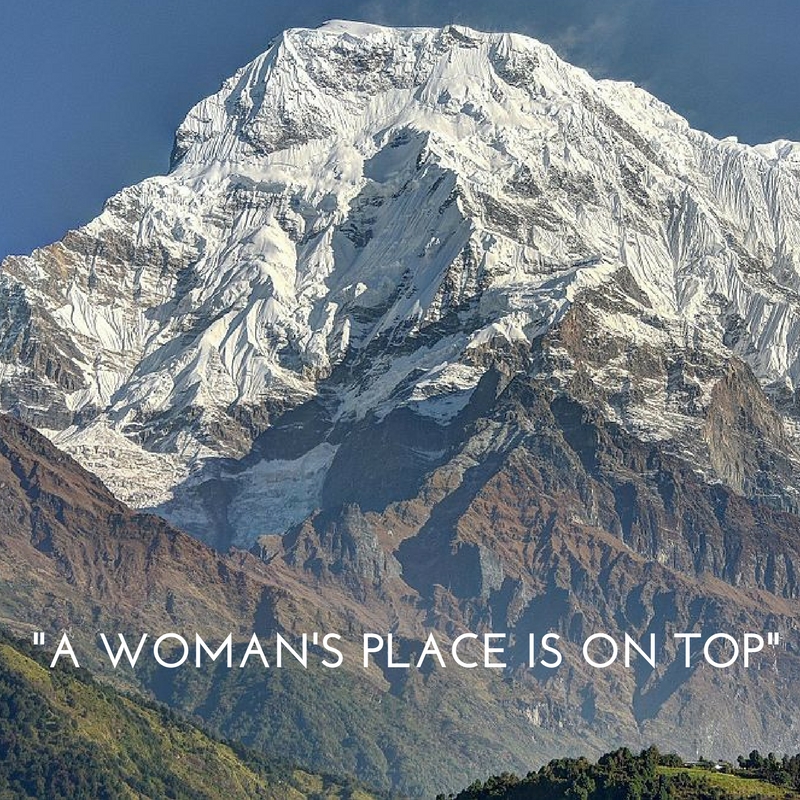 Ok, not an inspirational quote per se… It’s from a t-shirt created for the first American female ascent of Annapurna. 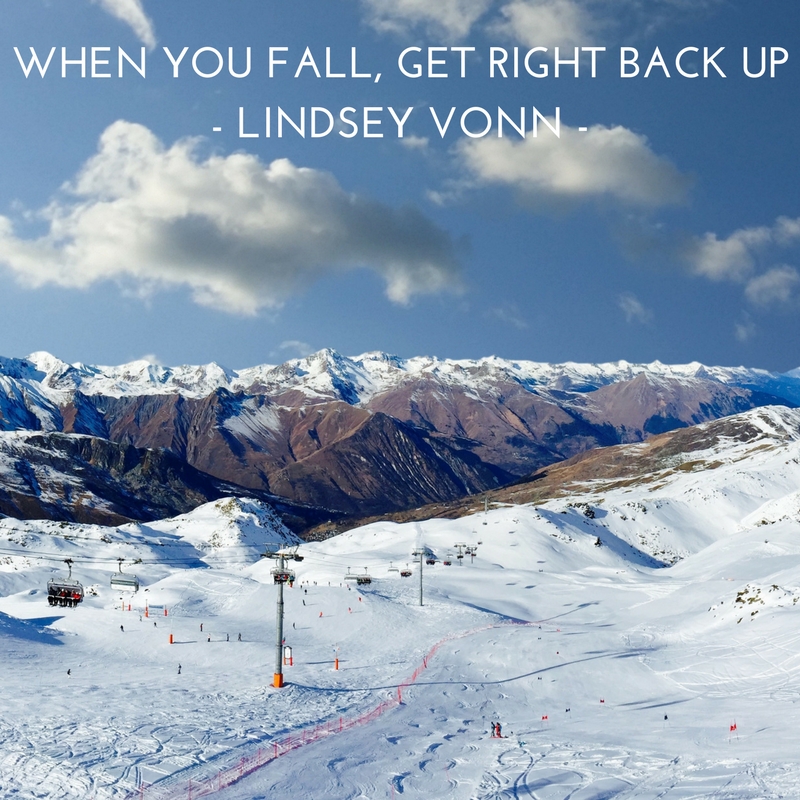 Lindsey Vonn has won 4World Cup overall championships and is one of only two female skiers to do so. She won the gold medal in downhill at the 2010 winter olympics, the first ever in the event for an American woman. She is one of 6 women to have won world cup races in all five disciplines – downhill, super-G, giant slalom, slalom and super combined – and has won 81 World Cup races in her career (an all time women’s record). With Olympic gold and bronze medals added in, she is the most successful American ski racer and is considered one of the greatest ever. So why is she inspirational? Not only has she set up her own Foundation – Website here – focusing on ‘strengthening the community by giving individual attention to the empowerment of girls‘ but she has also managed to come back from a number of what seemed to be career changing injuries, and come back on top. 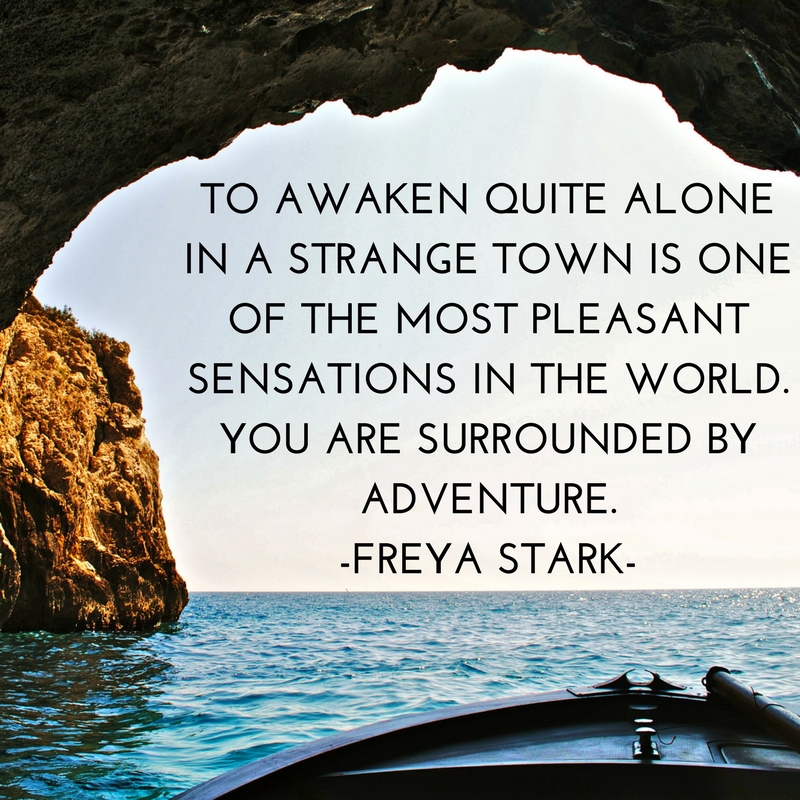 Freya Stark was a British – Italian explorer and travel writer. She wrote more than two dozen books on her travels in the Middle East and Afghanistan. She travelled to the Hadhramaut, where only a handful of Western explorers had previously ventured. 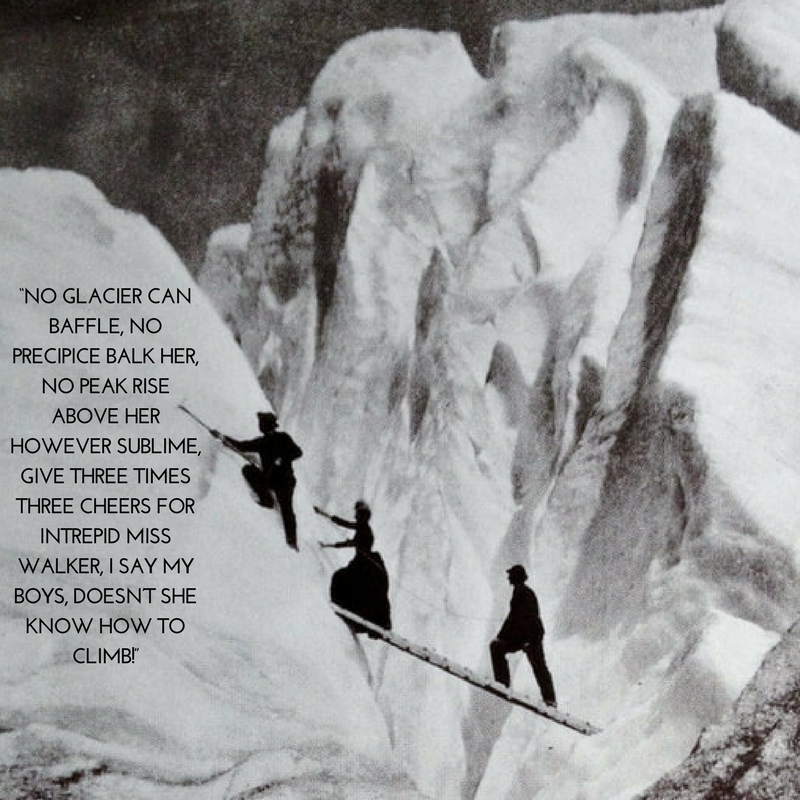 In 1871, Lucy Walker famously beat Meta Brevoort to become the first female to reach the summit of the Matterhorn.

She also made no less than 16 female first ascents – including the Balmhorn, Dent Blanche, the Finsteraarhorn and Monte Rosa, to name a few. She made the fourth female ascent of the Eiger (fuelled by her famous meal of champagne and sponge cake to combat her altitude sickness) and completed around 98 different expeditions, most with her favourite guide, Melchior Anderegg.

She was once asked why she never married, and replied with, “I love two things – Mountains and Melchior, and he already has a wife“. She went on to become the second president of the Ladies Alpine Club, formed in 1907 and arguably the world’s first great female mountaineer.

And she completed all of these in a skirt or dress… I struggle in trousers, so hats off.

I hope some of these have inspired you, or at least inspired you to go off and read more about their extraordinary stories!