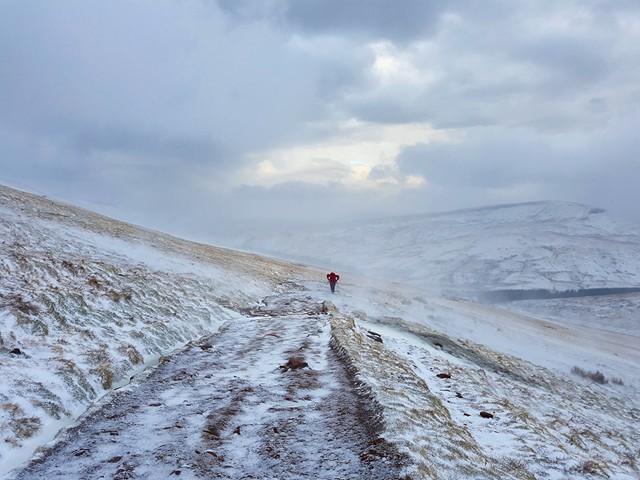 Fear.
an unpleasant emotion caused by the threat of danger, pain, or harm.

Well, haven’t we all been there?!
My biggest fear is spiders. Total hyperventilating, unrelenting paralysis in fact…
But that’s not what today’s post is about.

No to both of those.
I actually prefer being alone.
There’s a perception of fear in the unknown, I think, and for those who haven’t been independent enough to do things solo, the concept seems strange. 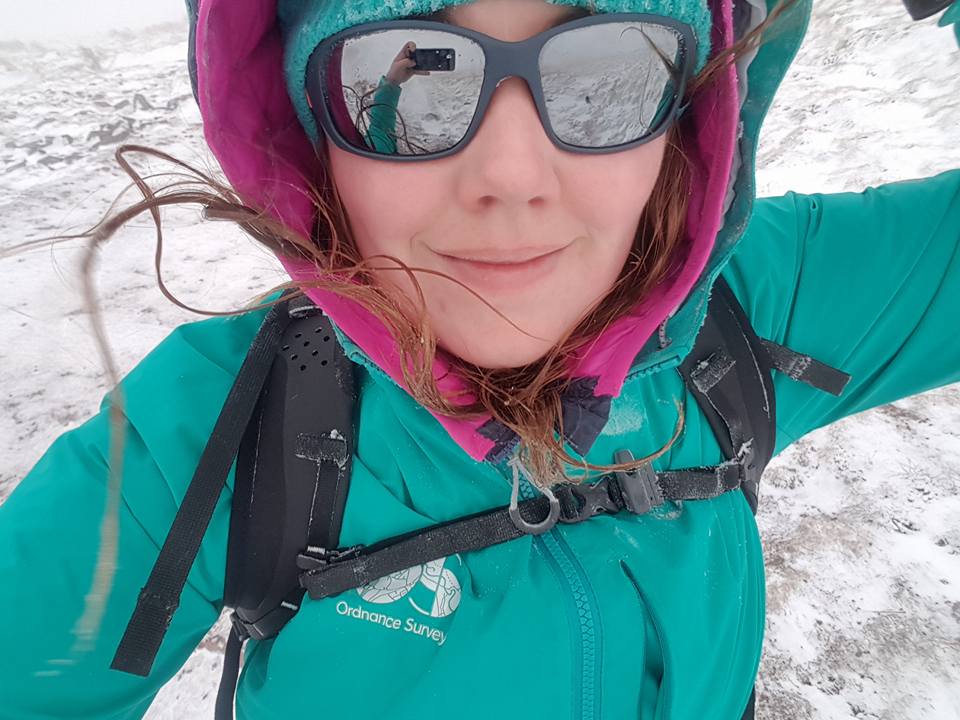 When I’m walking alone, I can clear my head and focus my thoughts without having to force conversation. There are a couple of people I know I’d be happy walking with in total silence, but the majority of people are unable to do it.

On Pen y Fan last weekend, I was caught in a semi whiteout.
The wind was howling and gusting so quickly that it actually took me off my feet a few times.
The bruises are still here and it was at that point, maybe half a click from the summit, that I decided to turn around.

Frustrated because I couldn’t even stand up straight, more frustrated that I’d just lost one of my favourite gloves. As I turned to head back, I heard someone (one of the few other crazy folk up there that day) shouting something at me. I still don’t know what he said, but he plodded off and I was the only one left up there. The wind kept howling before, suddenly, the snow blew in and I couldn’t see 1m ahead of me.

I’m pretty used to awful vis, I do a lot of walking on Dartmoor, but in this instance, when I factored in the almost inability to walk forwards too, I got stressed. I ended up walking down a path and realising I was heading off on my own magical adventure… in the wrong direction. 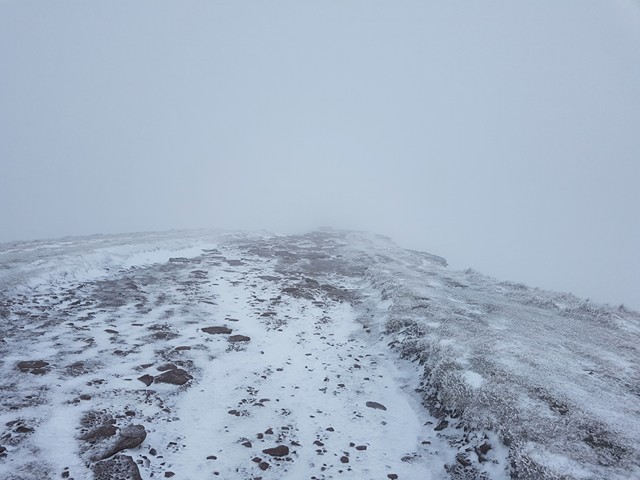 I panicked, I flapped about and every possible scenario flashed through my head.

After a 2 minute stress session, I sorted myself out, I knew I was about 150m away from a cairn if I headed back, and head back I did. I took my tiny printed map area out of my pocket once I reached it (I always print small areas as well as taking my main map because it’s easier in the wind) and then found the right path. My fear wasn’t being lost, and in all reality I wasn’t lost at all. If you’d asked me to point out where I was on a map, I could have. The fear wasn’t taking the wrong path, it was the fact that I realised my first instinct was to panic.

Kate, who used to send guys and guns around the world. Kate who handles pressure like a pro… panicked.

After speaking with some of my friends who are already ML’s, apparently this is a normal thing, and even happens to some of them on occasion, so I felt less angry with myself, but that fear needs channelling and, very kindly, a good friend Jason has offered to go out and do some nighttime micro nav with me to try to make sure those processes are in place to stop the panic the next time. I’ve always said that whilst I am going for my ML training this year, I want to make sure I’m 100% confident and happy before I do. People have pointed out that training is just that, but no. For me, I like to be happy in my own abilities first, and I know that this is an area that will let me down!

I won’t even get started on the fear of failure!

The only other time I’ve felt any fear outdoors was in the Alps.
On two occasions actually…
On both of these, I acted differently, though.
The fear was there but I harnessed and channelled it.
Something I perhaps need to apply to everyday life…

Climbing is not my forte. I guarded myself too much when I started because of my knee and I have a huge mistrust of kit.

Yes, kit… Not falling, not heights but kit. 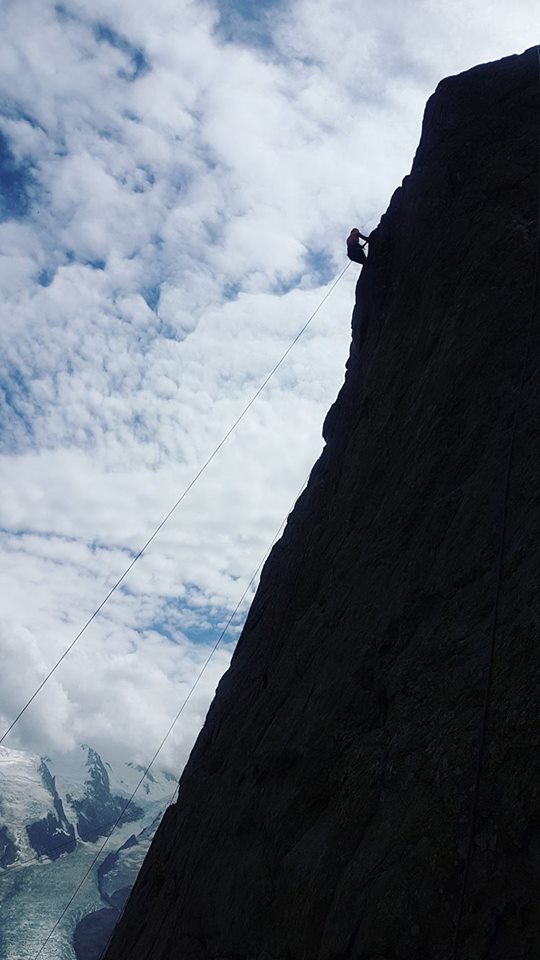 Is this rope safe?
Is this gear safe?
Does my belayer actually know what they’re doing?

It’s something I still struggle with. I don’t have one set person I climb with regularly, my friends down here aren’t that adventurous… so, it’s usually just some random person at the wall. In France, it was a member of my group, but a French member. The language barrier wasn’t an issue, I speak French very well, but the thought that I was trusting some total stranger, who I’d only met that morning, also with a potential language issue didn’t sit well with me.

I got half way up the face, slipped and that was it. Confidence shattered. After a few mild panics (see the theme here?), my guide climbed up and had a very French, very blunt discussion with me about how the kit was fine. He took over belaying me and the rest of the afternoon I was happy as a clam, and actually climbed some of the more difficult routes we were set.

The fear was still there, but I’d harnessed it I guess or at the very least put it at the back of my mind.

Now? Every time I climb, I don’t think of what could happen, but what is happening.
I sit there in the moment, entirely present and crack on with it. ~
Sir Ranulph Fiennes suffers with vertigo, and once said that you have to just focus on the next move, the next step and nothing else.

That’s something I have tried to do, and will continue to!

The second moment of fear?

It was midday.
We were on the glacier at Les Grandes Montets.

We’d been up there for a couple of hours playing about, doing some climbing – rock and ice – and were planning 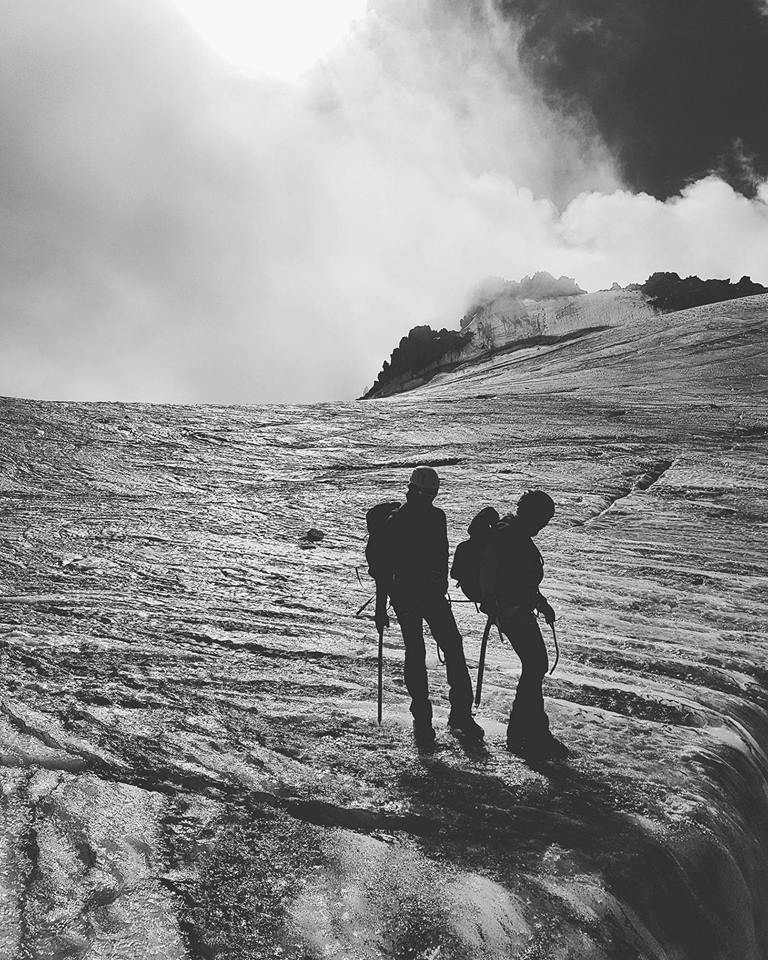 to head to the very top. Then the weather decided it had different plans. A storm was coming in, and not a nice looking one, so our guide wanted us to get down PDQ. No huge drama, but we were all pretty conscious that we didn’t want to be stuck up there when it hit, so we were moving pretty quick. Suddenly, I was hip deep in a crevasse which was hidden away under the snow. Brief panic in the instant that I fell (again, the theme…) and I clambered out. It wasn’t a big one, the Kardashian hips helped, along with the fact we had covered crevasse rescue already, but it was enough to have shaken me up, had I let it.

Maybe I was feeling confident from my climb earlier that week, maybe I just have some kind of weird fear spectrum (as I said, no fear of falling) but I got out and carried on, then the next day and the next. I’m still not phased by it in the slightest…

Of course, it could well be a different story had it been a larger crevasse and meant that we had to actually use those rescue skills properly. Who knows?

All of these are things which caused that instant panic, and could well be enough to put someone off an activity. I know of someone who fell off a horse once, and has never ridden again (calamity Jane here played polo, so tragically knows the true meaning of getting back on the h̶o̶r̶s̶e̶  pony).

If we let our fear dictate what we do, we would never do anything.
~Often, I’ve found that fear acts as a lesson and shapes our experiences for the future, making us more well rounded individuals.

As long as you confront it…

Does that mean I’m going to go and hold a spider next week?
No, it does not.
But I’m sure as hell going to sort my micronav and climbing kit fear out and enjoy life…

The best experiences come from leaving your comfort zone.