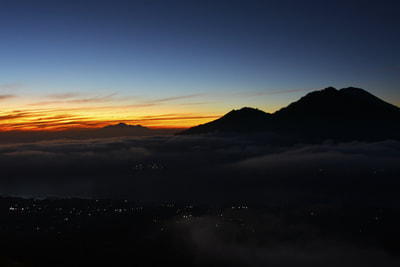 18th September 2017 admin Leave a comment
We woke early in the morning, in preparation for the climb. The climb itself wasn’t meant to be hard, but responding to the alarm alone was a tough first hurdle, having climbed into bed only 3 hours before. We were due to leave at 2am, and wanted to make sure that we were prepared. This was the first time I’d gone up a mountain in over a decade, and the first time I’d done so in the dark. I desperately wanted to go back to bed, but the alarm was sounding, and Mount Batur was calling.
​
Mount Batur is an active volcano nestled in the highlands of Bali. The peak overlooks a caldera, yet sits inside the rim of a larger, wider caldera. This unusual topography presents some astonishing views, particularly in the early morning, when the lake contained in the larger caldera is enshrouded in mist. Clocking in at 1,717m elevation, it is accessible even for inexperienced climbers. Despite a number of holidays to the Lake District as a child, this was definitely a group that I fell into. Come to think of it, I’m not sure how I’ve made it onto this blog in the first place. 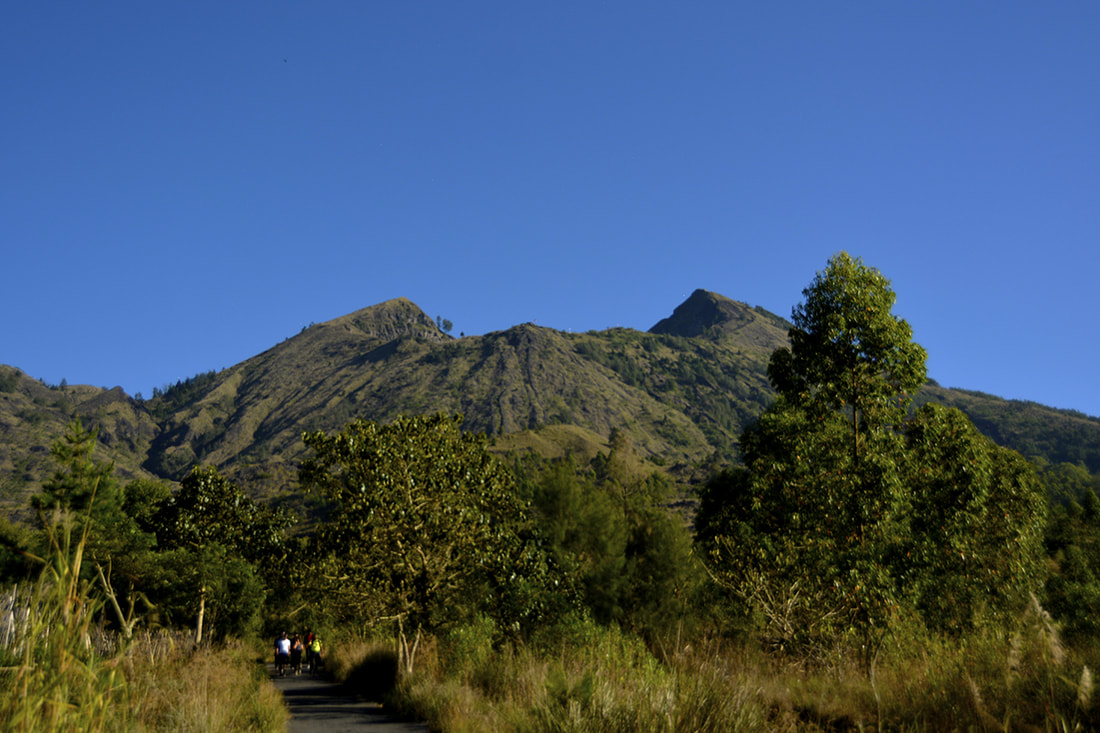 A taxi picked us up from our hotel in Ubud shortly after 2am. The first order of business was to take us to a small café en route, where we were treated to a cup of tea (very welcome at 2 in the morning) along with a fairly miserable pancake featuring a very brown slice of banana in the middle (which was still surprisingly welcome). Once these were consumed, we hopped back into the car and were handed a polystyrene takeaway pot, containing an under ripe banana, a piece of white bread – sans topping – and a boiled egg. Hardly the breakfast of champions, but we figured we’d save it to snack on at the summit.

The car wound its way through the highlands towards Mount Batur, carrying us part of the way up. We left the taxi in the car park and met Darthi, our guide for the ascent. Proudly kitted out in a Real Madrid t-shirt, a clean white hat and a pair of bright pink trainers, Darthi was a diminutive local – standing at a shade over 4 feet – she was also surprisingly young to be looking out for 4 clumsy, flatfooted westerners such as ourselves. Despite her age, she was clearly experienced, explaining to us how she climbed the mountain every day. She was also a surprisingly solid extra handhold on some of the steeper sections of the climb, even for the rather larger man who was part of our party.
​
The 3 hour ascent began with us leaving the car park, following a moderately flat path that was fairly similar to the car park itself. After a few minutes we passed a sign warning against attempting the climb without a guide. It was at this point that the climb began in earnest, as the path became sharper, snaking its way up the mountainside. With the path growing steeper still, the stones covering it giving way to a rockier layer, the abundance of groups ahead of us slowed down, and we became part of a several mile long line, stretching towards the summit.
The effect of this was impressive, as hundreds of head torches illuminated the path ahead of us, lighting it up like fairy lights. We followed the path, feeling it get steeper, until we reached a small plateau containing one of Bali’s myriad of shrines. Darthi stopped to make an offering to the mountain – taking out a small banana-leaf tray containing a number of items, each of which she diligently held above her head in turn before placing it back in the tray. 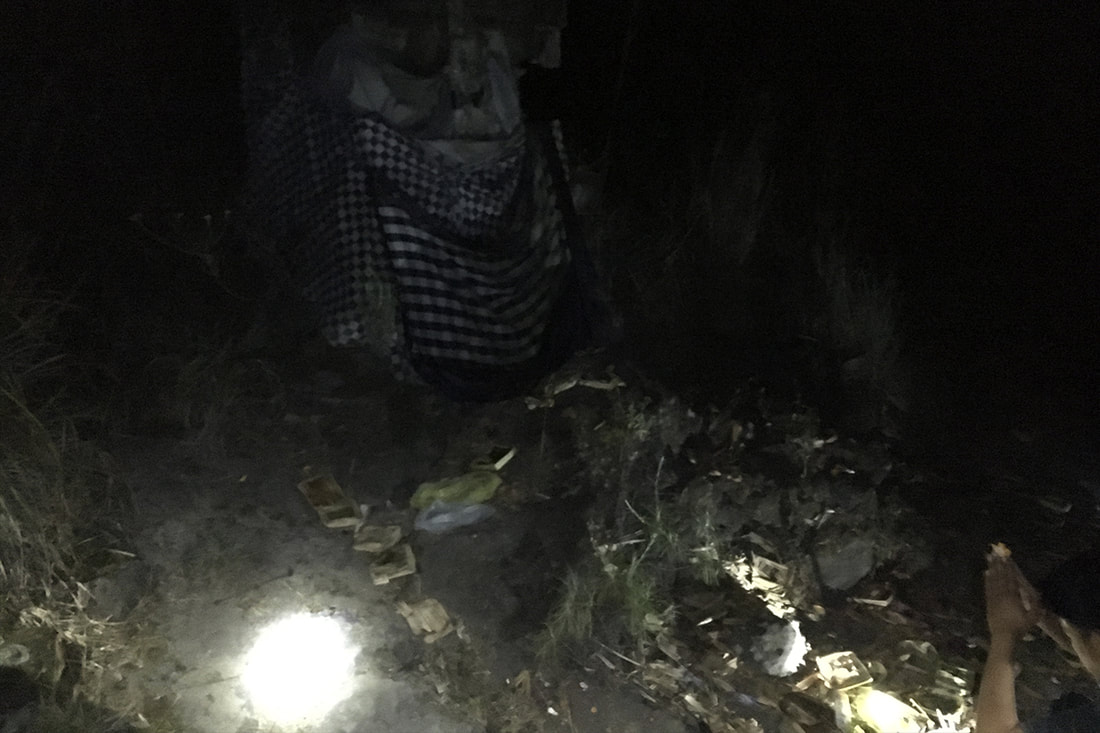 Having used this brief break to cool down a bit, we continued up the mountain, the track continuing where it had left off. The pace of the huge group slowed to a point where the line of tourists felt more like a queue, and whilst it was slow, an interesting sense of camaraderie grew up amongst the people adjacent to our group. People shared in-jokes about the Australian guy carrying a bottle of beer up to the summit, and offered support to those who were taking time out. The atmosphere among the group was good, even as the physical atmosphere was full of dust and mist and cold.
​
After a couple of hours of climbing, the deep blues of the night sky slowly began to give way to a dark crimson on the horizon. Dawn was coming, and we were still 20 minutes from the top. Darthi was frustrated by our lack of progress, hindered by the sluggish conga line heading to the summit. She wasn’t alone, impatient guides started pushing past and taking different routes towards the top, attempting to bypass the slower. The camaraderie of only a few minutes before had been replaced by a mad scramble. 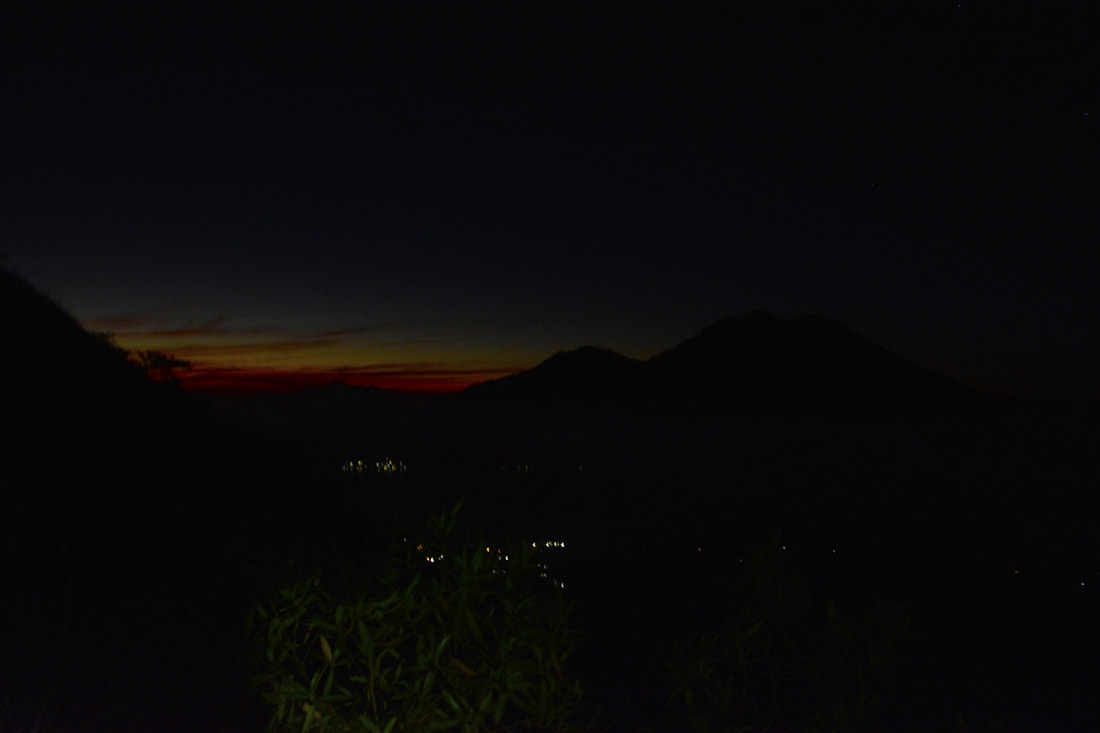 ​We made it to the viewing platform – just short of the summit – shortly after first light, but were still able to watch in wonder as the sun rose over the distant rim of the wider caldera. The colours were incredible, deep violets running through blues and yellows, terminating in vibrant reds around the caldera’s rim.
We sat and watched for some time, as the warm glow of the morning sun illuminated the lower slopes that we’d climbed in the dark. Darthi came and handed us our takeaway trays of breakfast (to be generous), only for a dog to come along moments later and put his paw through the top, crushing the contents.
​
Exchanging this one pest for another, we continued on up towards the still active caldera, where there was a large number of macaque monkeys. We’d seen this species of monkey in Bali on a couple of occasions, full of personality, most of which was mischievous. They engaged in a lot of theft, and could commonly be seen climbing on people. These two things often coincided.
​After taking some photos of the monkeys, we headed back down to the viewing platform and began the descent. This turned out to be surprisingly hard work, as the climb the night before had left a lot of loose rocks, and footing was seldom stable. The views on the climb down were awe inspiring, taking in the large caldera lake on one side of the mountain, and a similarly sized black basalt field on another. 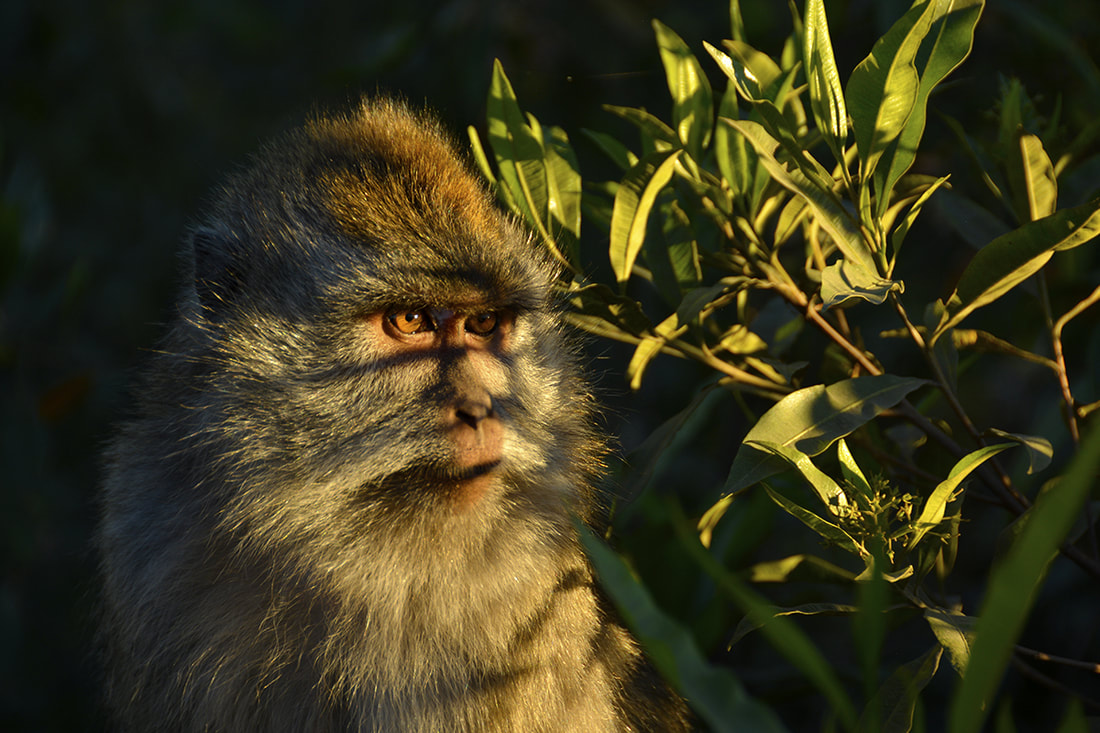 These hadn’t been visible during the climb in the dark, and were welcome distractions from the aches and exhaustion. By the time we reached the car park and said goodbye to Darthi, it was only 10am, and soon enough we were heading back to our hotel, and to a deep – albeit belated – sleep.

The experience was amazing and well worth the early morning rise!

Jonny Crouch – the First Time Wanderer – is a blogger and illustrator who left the travelling thing until quite late. Aged 28, he left the UK for the first time (bar a trip just over the border to France when he was 4) and has since been making up for lost time. Now over 7,000 miles from home, he is experiencing firsts at an alarming rate, and writing about them in his blog, First Time Wanderer.Follow him online!
Blog
Facebook
Instagram
Twitter