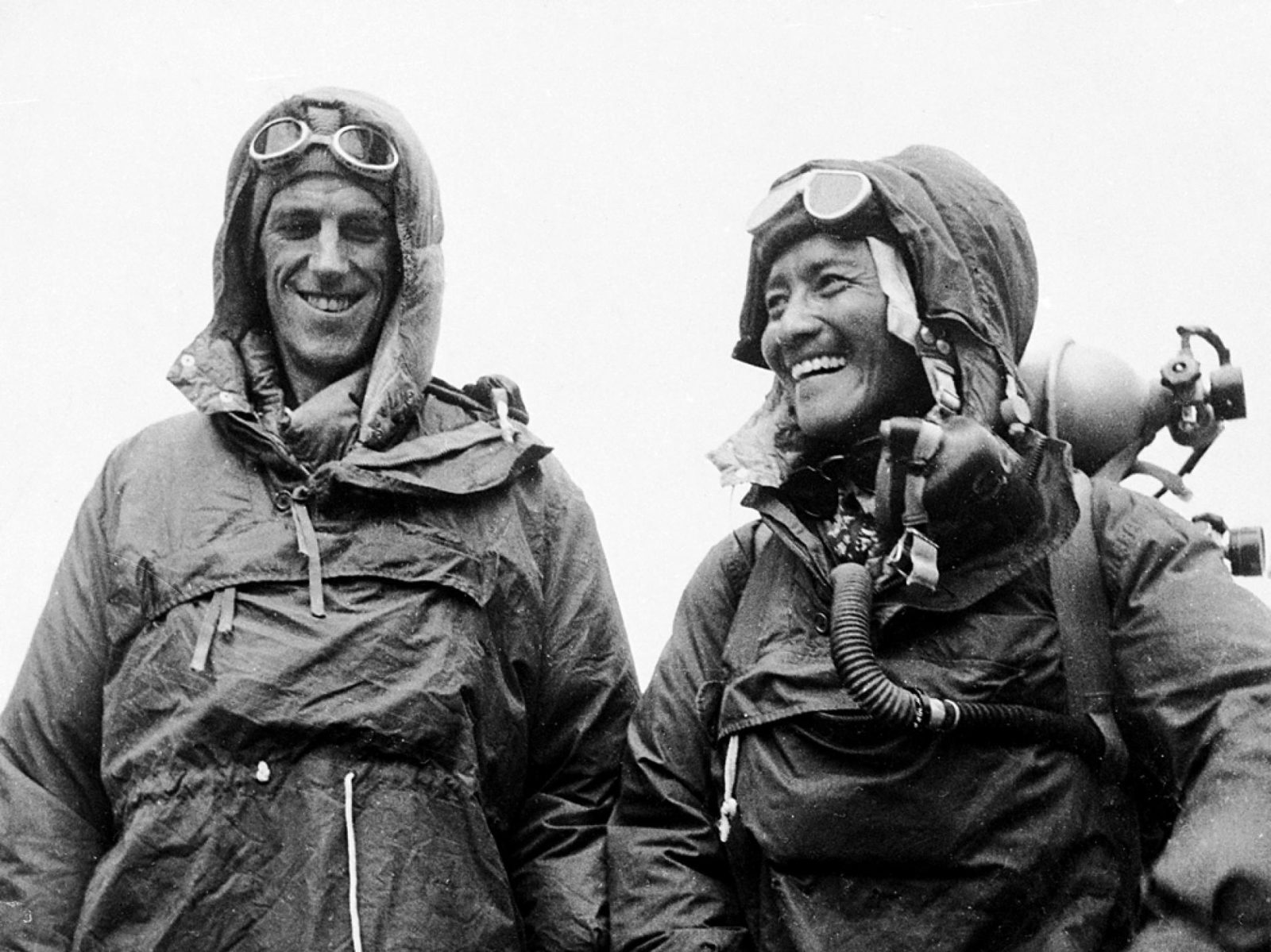 Everest.
Mention it and it conjures one of two emotions in the minds of mountaineers everywhere…

To some, Everest is a beast that must be conquered.
To many hardened mountaineers, she’s now seen as an ‘easy ride’, covered in guides dragging clients up.

A good friend once told me that, “if you want to impress kids at birthday parties, climb Everest. If you want to impress mountaineers, climb K2“. With the start of Everest season, hundreds of people will make their attempt on the summit.
They won’t all make it to the top, but hopefully sensible decisions will be made by guides, limiting any loss of life.

So who was the first to conquer her?

Sir Edmund Hillary and Tenzing Norgay are almost household names in the mountaineering world. Their 1953 expedition was the ninth to attempt the first ascent and the first confirmed ascent of Everest on the 29th of May 1953.

Led by Sir John Hunt, a British Army officer, they headed out to Nepal in March 1953, after having spent the winter training and honing their mountaineering skills on the slopes of Snowdon and the Glyderau. The sheer rock faces, treacherous screes and traverses are among the most testing in Britain and proved the perfect training ground that winter. Many of Hillary’s early rock climbs took place on Y Lliwedd, a peak connected to Snowdon featuring a range of steep cliffs.

15 mountaineers, 20 sherpas and 362 porters meant that this was one of the largest expeditions to be carried out.

Upon arrival to Nepal, the expedition team had accommodation organised by the Embassy as the country was only recently opened to the outside world and, as such, there were no hotels in Kathmandu at the time. Twenty Sherpas, led by their Sirdar, Tenzing Norgay, arrived to assist with carrying kit to the Western Cwm and South Col. Tenzing was attempting to summit Everest for the 6th time and was the often referred to as the best known Sherpa climber and a mountaineer of world standing. They left for Everest on the 10th of March, followed by the second party and 200 porters on the 11th of March, reaching Thyangboche on the 26th and 27th of March respectively, for the next two to three weeks completed a number of acclimatisation treks.

The “Icefall party” carried on to Base Camp, at 5455m on the 12th of April 1953. They set about establishing a route and fixing ropes through the Khumbu Icefall to the South Col, before teams of sherpas moved kit to the next camp, slowly gaining altitude and working their way up the mountain.

One of the summit pairs selected by Hunt (Tom Bourdillon and Charles Evans) set off for the summit on the 26th of May and successfully achieved the successful first ascent of the South Summit (8,750m) before having to turn back, due to a lack of time and also problems with their oxygen equipment. On the 28th of May Edmund Hillary, Tenzing Norgay, Alfred Gregory, George Lowe and Ang Nima climbed from the South Col to an equipment dump set up by Hunt a few days prior. A camp was established at 8500m and Hillary and Tenzing spent the night here before setting off the next morning for the summit.

They reached the summit at 1130 on the 29th of May 1953 via the South Col and rock outcrop dubbed the “Hillary Step”.

“I continued on, cutting steadily and surmounting bump after bump and cornice after cornice looking eagerly for the summit. It seemed impossible to pick it and time was running out. Finally I cut around the back of an extra large lump and then on a tight rope from Tenzing I climbed up a gentle snow ridge to its top. Immediately it was obvious that we had reached our objective. It was 11.30 a.m. and we were on top of Everest”

They took photos, ate some sweets and buried a small cross in the snow. Hillary’s first words on returning safely from the summit were to George Lowe and he exclaimed, “Well, George, we knocked the bastard off!”