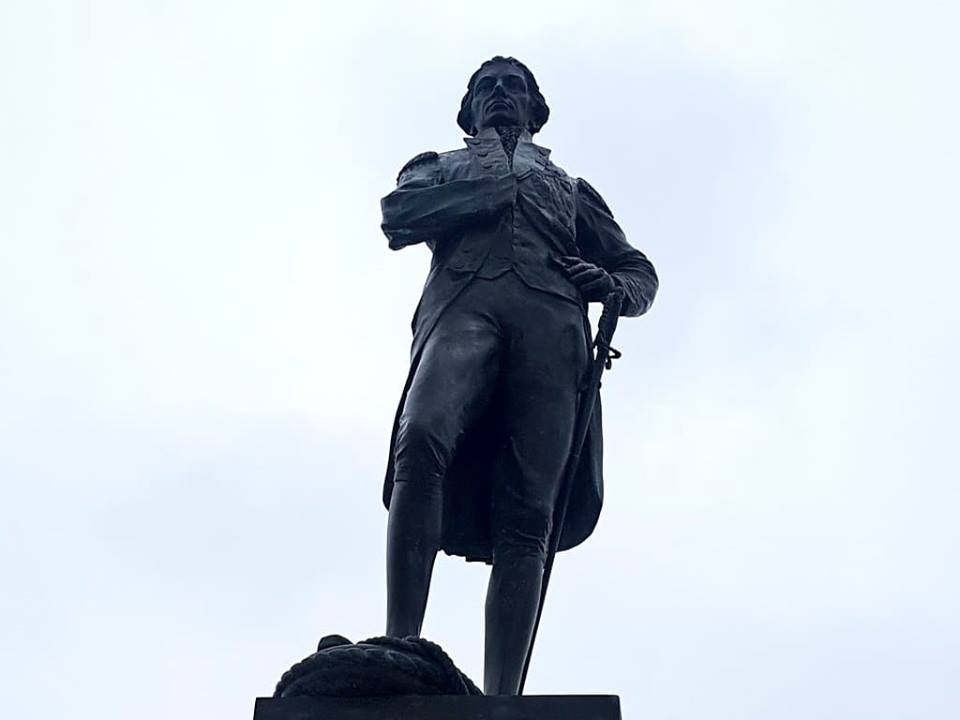 On the morning of September 14th 1805, Horatio Nelson reached The George Hotel in Portsmouth, after a long journey from Merton, in London.

After breakfast, he headed straight off to the dockyard for a meeting, before returning to the hotel to meet with George Rose, the President of the Board of Trade and George Canning, the Treasurer of the Navy. 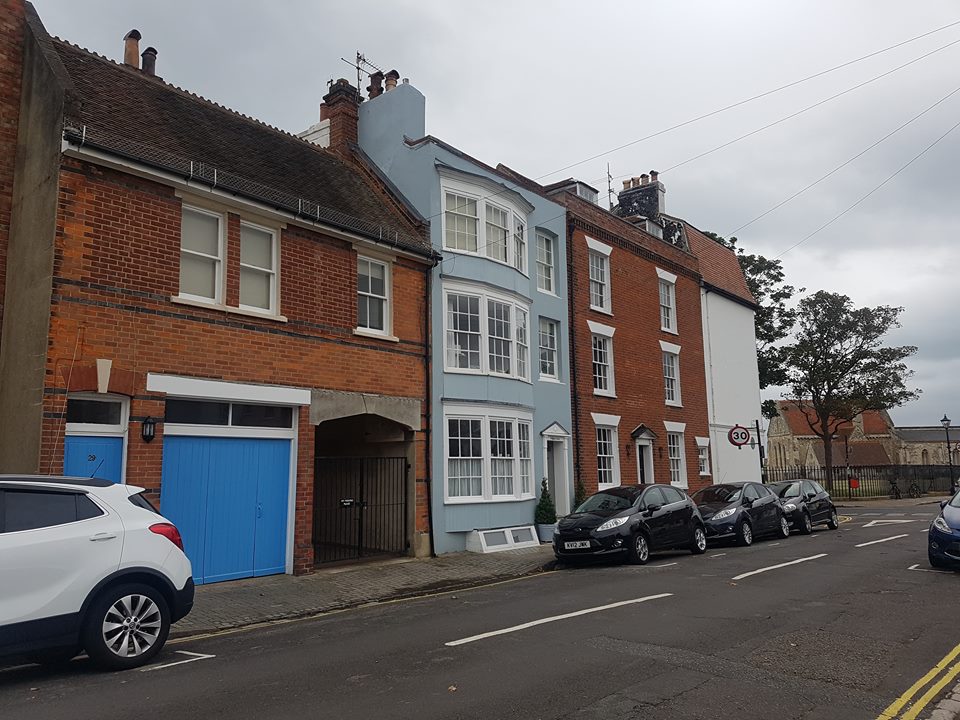 Usually, officers would embark at the Sally Port at the seaward end of the High Street, but such a huge crowd had gathered to see Nelson, that he couldn’t do this and had to take an alternate route. He snuck out the back of The George Hotel (this no longer exists as it was bombed, but would have been around 100 yds up from the junction, with 1950’s apartments now on the spot) walked down Penny Street, to the end of the road, turning left on to Green Row, now Pembroke Street.

The reasoning for this route can be found on the website of the Nelson Society, which also discusses inaccuracies in artwork of the time and answers as to why this is most likely to be the route Horatio Nelson took on that day.

Walking down Pembroke Street, you look across Governor’s green to the Garrison Chapel, which is as it was in 1805, though now lacking a roof due to bombing in WWII. Green Row was, at that time, a dead end street, and the end of it was blocked by the ramparts. As you walk down Pembroke Street, you will reach a single storey red brick building, the old guardhouse for King William Gate, built in the 1830’s to allow access to Southsea. Turn right down the narrow lane to the side of it, and what is left of the ramparts will be on your left.

There was one exit to the beach from the eastern end of what is now Old Portsmouth, a tunnel through the Kings Bastion ramparts, the 18th Century seaward defences, via a drawbridge over the moat, to the Spur Redoubt. You can now walk through this tunnel, reopened fairly recently and you’ll quite literally be following in Nelson’s footsteps.

The tunnel leads to a newly built bridge, which replaces the original that would have crossed the moat. It’s aptly now named Nelson’s Bridge and leads to what remains of the Spur Redoubt, unfortunately knocked down by the Victorians, in order to build a promenade. 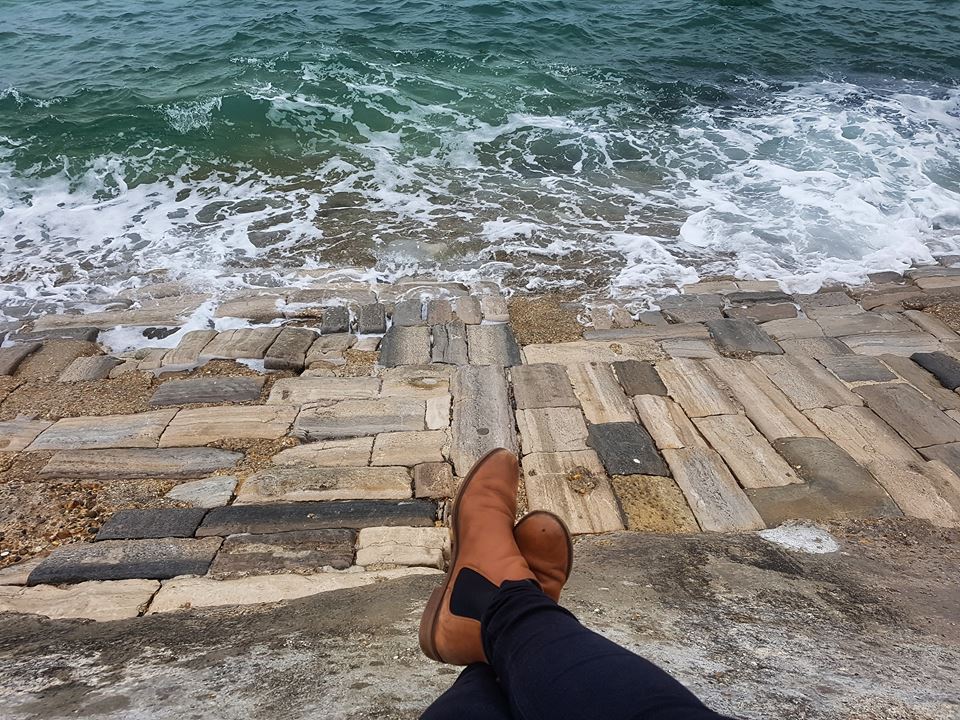 You can walk through what reminds of the Spur Redoubt wall, and here Nelson would have walked onto the beach, but now it’s a car park…

You can walk along the outer wall and past the fence to get to the sea wall, and look along the defences to where Nelson would have taken his final steps on land. Huge crowds of people turned out to wave him off, and as he embarked a barge, taking him out to St Helen’s, the easternmost point of the Isle of Wight, to board HMS Victory for the final time, he’s said to have told Hardy “I had their huzzahs before, I have their hearts now” 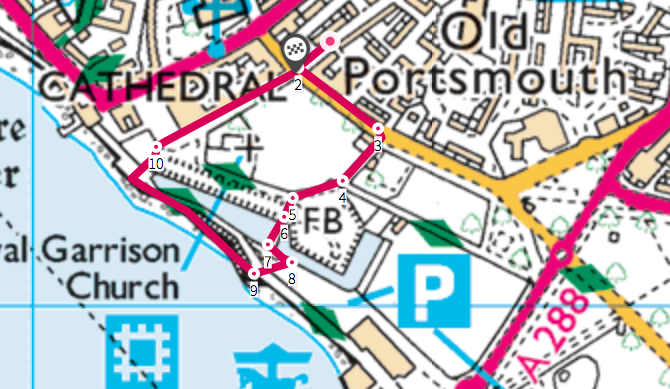 Click here for the OS Maps route and GPX File starting and finishing at Penny Street. It follows Nelson’s final walk to the seafront, before an additional leg I added in that loops back, taking in the statue of Horatio Nelson. If you’re visiting Portsmouth Historic Dockyard or Gunwharf Quays, it’s about a 10 minute walk to Penny Street.