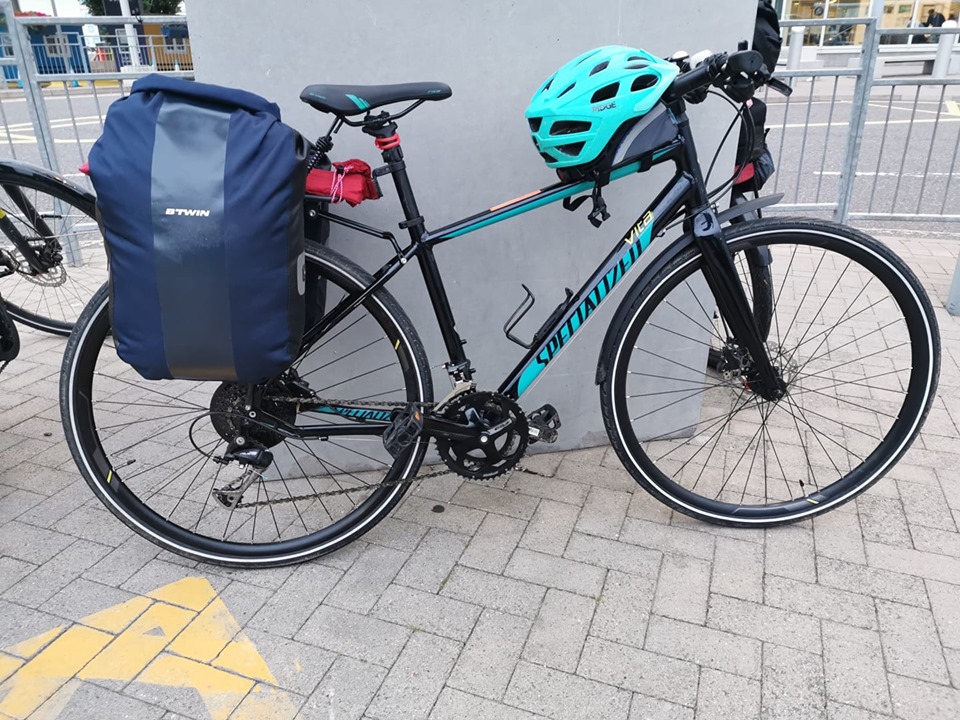 A year ago I planned a bike ride. I was going to cycle from Sword Beach, in Normandy, where my Grandad landed with the 12th Devonshire Regiment in June 1944. The plan? Get the ferry to Caen, ride along to Lion sur Mer and then head back to Pegasus Bridge and across Normandy to the River Seine, where the Regiment finished their time in Normandy, before returning back to Britain to train at Bulford once more.

I pored over old GSGS (Geographical Section, General Staff) maps from the War Office, over books on the Regiment and over war diaries. 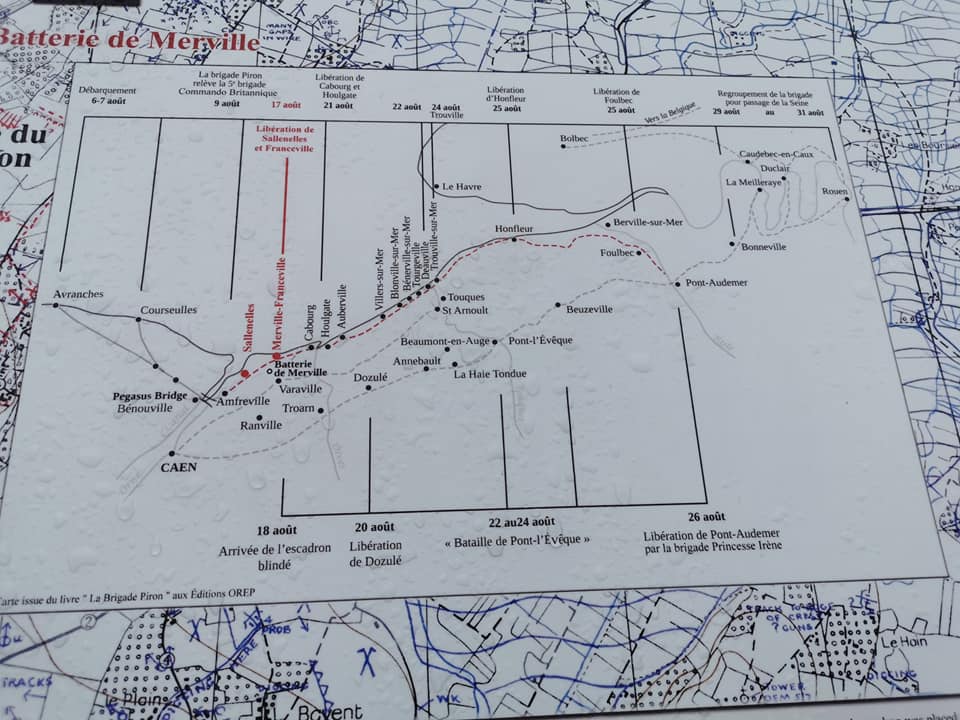 Eventually, I worked out where the 12th Devons fought, where they headed with the rest of the 6th Airlanding Bridgade, and the best way to ride the route, via roads. I got hold of some modern maps of France, made by IGN, the OS equivalent and got scribbling.

I then decided to postpone the trip for a year.

Well, 2019 is the 75th anniversary of D-Day. What better time to start a ride? However, I knew that by postponing there was only one week in which I wanted to ride, and I wanted to either start or end on June 6th. Due to a family wedding I was only able to finish on the 6th, and so decided to ride the route in reverse, instead, making it more of a “Seine to Sword Beach” trip. No huge dramas, and it turned out this worked incredibly well, all things considered.

Not least because it meant riding down two very large hills, instead of up them. 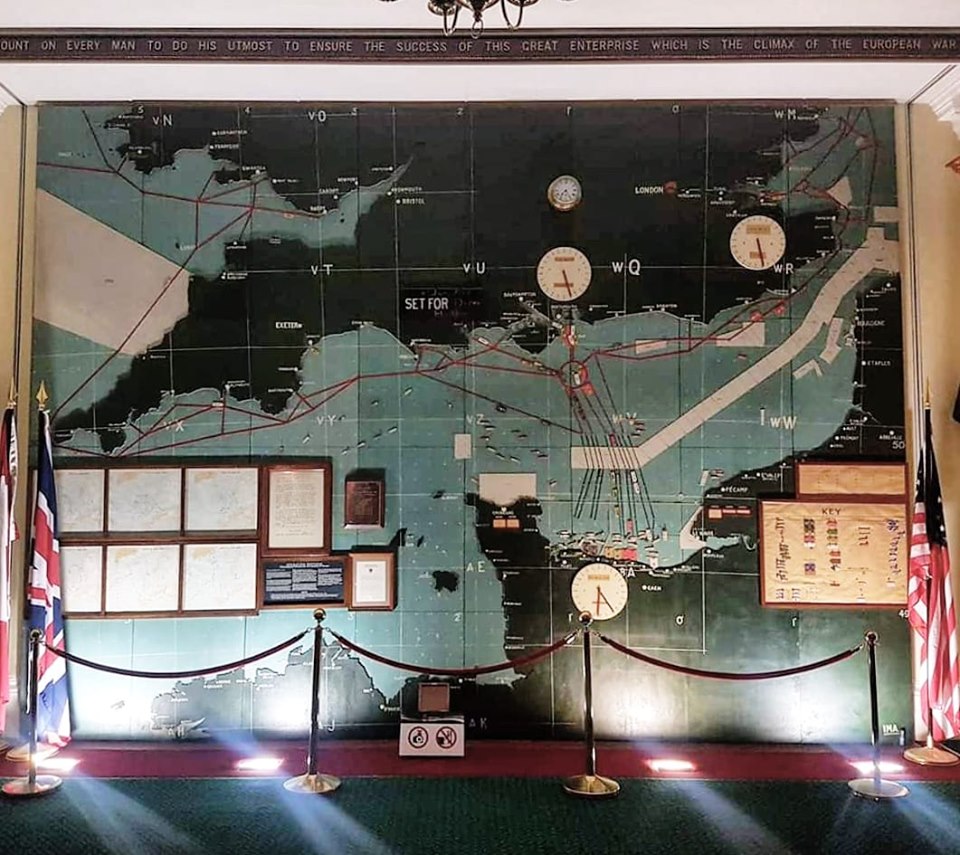 I even got to go and see THE map at Southwick Park in Hampshire which was the forward HQ for the Normandy invasion. This map exists today, perfectly preserved, as it was 75 years ago. Chad Valley (the toy company) were told to create a map of the entire coastline, so nobody would know exactly which section was to be used for the invasion.

It is from Southwick that Eisenhower, Ramsay and Montgomery wrote their famous letters to the troops on the eve of battle. It is here that the decision to postpone due to weather was made and from here that Monty and Eisenhower departed for Normandy having spent the day orchestrating the invasion by land, sea and air.

Get the ferry to Le Havre, ride across Normandy and then head home from Caen. Unfortunately, Brittany Ferries had other ideas and, due to strike action (apparently an annual extravaganza at Le Havre this time of year), cancelled the ferry to Le Havre two days before we were due to sail. Thankfully, after some incredibly passive aggressive polite chat I managed to get us on the ferry the same evening, but to Caen, and then a transfer for us and the bikes to Le Havre.

My mum, who decided to join me, and I packed our panniers (coffee and haribo a-plenty), got the bikes ready and were all organised. My stepdad decided, 2 hours before we were due to leave for the ferry I hasten to add, that he wanted to join for a stint too. This caused much stress, and less than diplomatic mutterings, but we eventually all made it to Portsmouth in time to get the ferry to Caen. 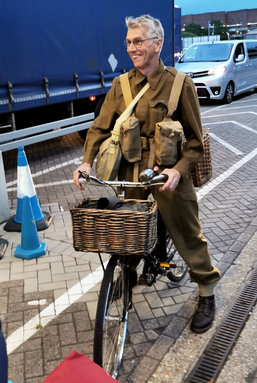 We even met this incredibly well dressed chap in the queue to board. He had come from Yorkshire, driven to Portsmouth and, unfortunately forgotten his helmet which was a shame. Remember him for a later post…

I have an ability to sleep anywhere, so thankfully found an unoccupied spot on the floor and got my head down. Fine, until the people in the front row of chairs thought it would be funny to use me as a footrest? No, huns, no. I woke up, glared and stormed off to find another spot of floorspace. After a night of sleeping on the floor of the ferry, surrounded by incredibly loud and snory squaddies, and on around 2 hrs sleep, the lights came on, we grabbed breakfast and prepared to leave the ferry and meet our transfer to Le Havre. Unfortunately, this was only for two of us, so my stepdad went and set up the tent, before planning to ride out and meet us halfway…

We hopped in the car, had our bikes less than ceremoniously chucked in the back of a trailer (can you not) and we were en route!

At the other end, the bikes were removed as unceremoniously as they were placed in to begin with, and bear the battle scars to prove it, but we were ready and able to start riding…