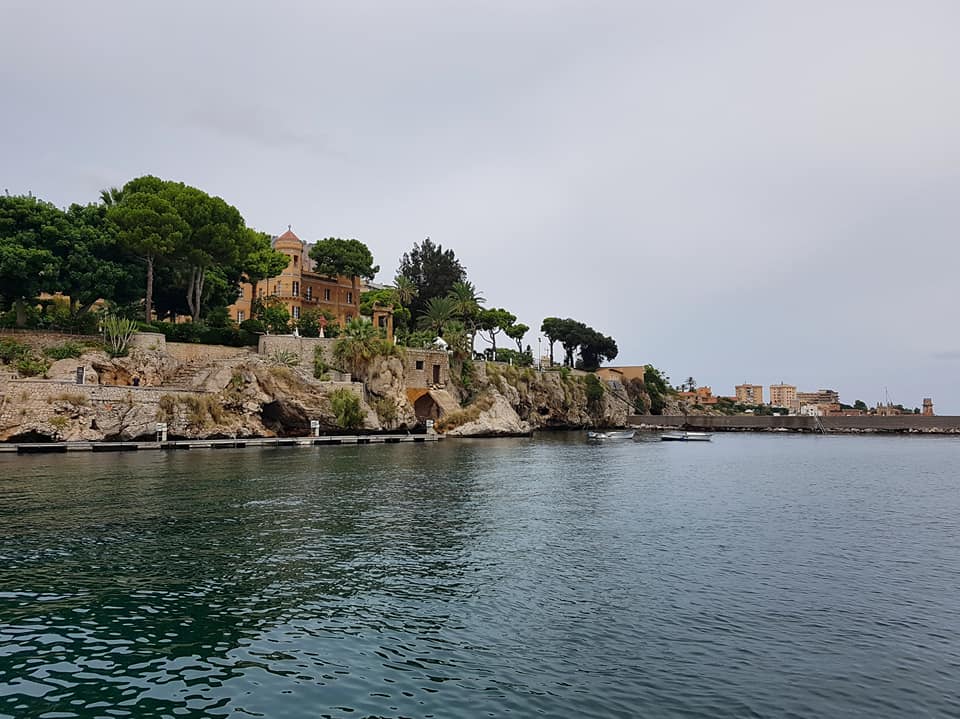 I was recently in Palermo for work and, whilst most of my time was spent prepping and getting everything ready for a yacht race, everything closed on Sunday and so I had the chance to be a tourist.

Palermo isn’t somewhere I’d really considered visiting and, in all honesty, probably wouldn’t have if it weren’t for work, and I regret that hugely now! I knew there was a naval history aspect (Horatio Nelson, I know, nobody is surprised) but I didn’t know much else about the city other than The Godfather having been filmed there.

I stuck my trainers on and got walking.

The Monument to The Victims of the Struggle Against The Mafia 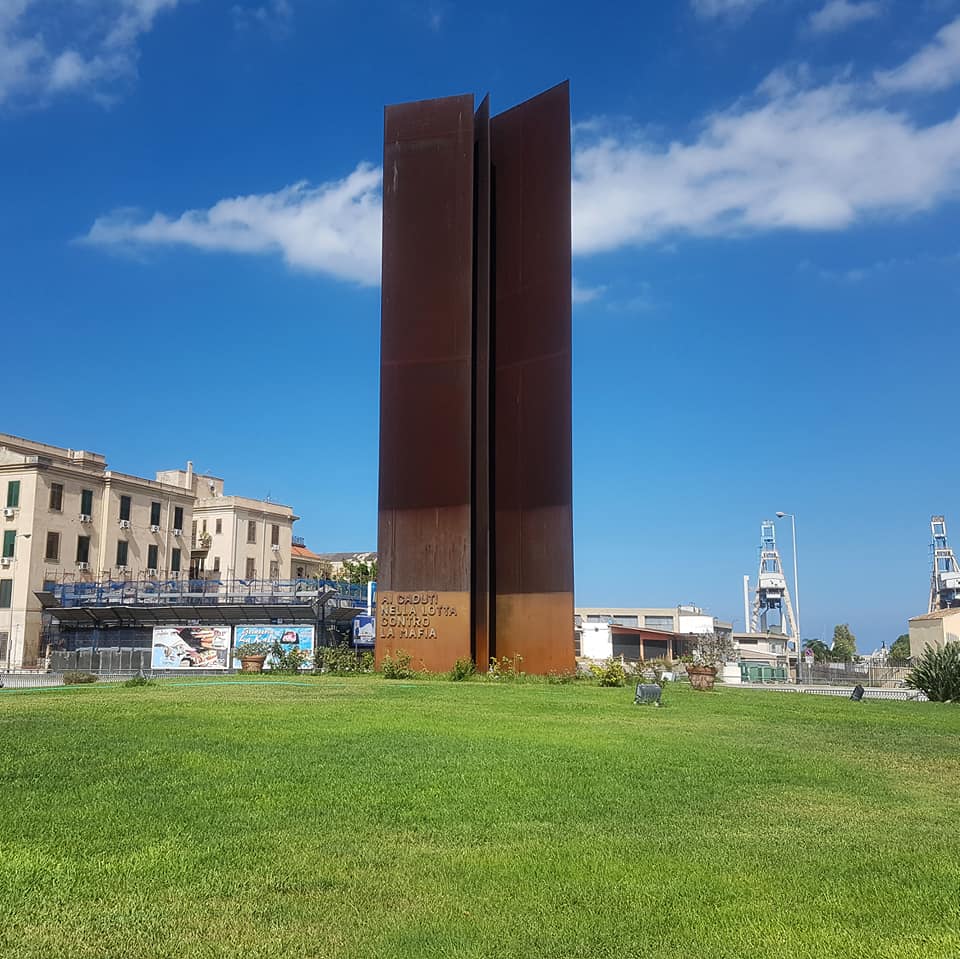 ‘The 13 Victims’ are the thirteen Sicilian patriots executed in this square, without a trial after the failed Gancia Revolt in 1860. The names of these thirteen men are engraved on the obelisk. The obelisk is just opposite the monument to the victims of the struggle against the Mafia. 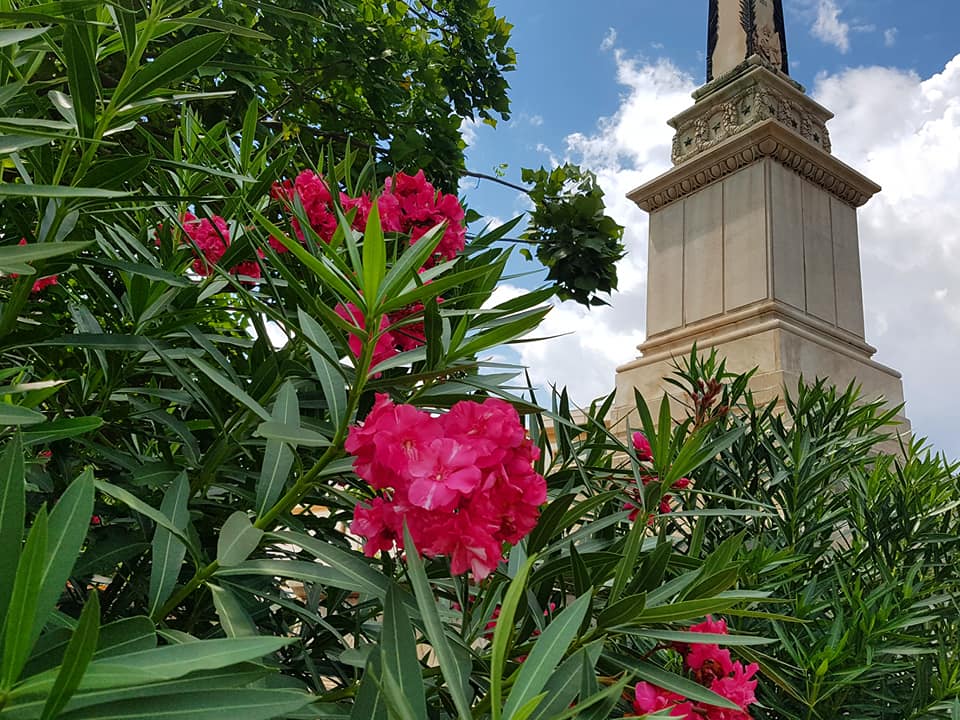 Apparently, until 2005, the area around La Cala Marina was off limits. Rubbish filled the streets and it was a haunt of drug dealers working on behalf of organised crime such as Cosa Nostra. Today, hundreds of yachts are anchored here and you would never have guessed its’ dark history. 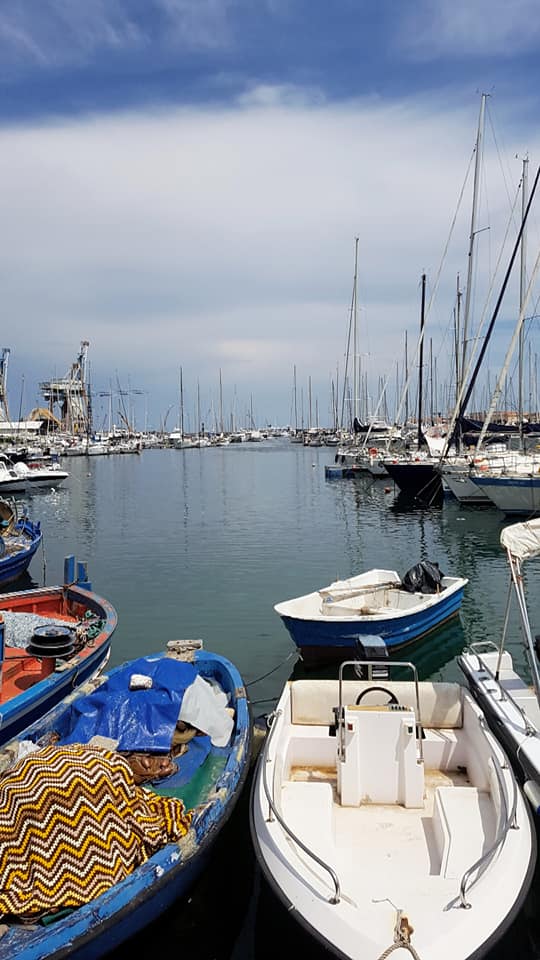 Porta Felice is the waterside entrance gate of the Cassaro (the main, most ancient street in Palermo) The gate was completed in 1637. During WWII the right pillar was almost entirely destroyed because of the bombing, but it has now been restored to its former glory.

As you walk along the Foro Italico there is a statue dedicated to Vincenzo Florio, a Sicilian politician and entrepreneur, as well as senator of the Kingdom of Italy. He was  famous for having built the famous Florio cellars in Marsala for the production of Marsala wine, and was also president of the Chamber of Commerce of Palermo and founder of the Sicilian steamboat company, which in 1841 inaugurated the first maritime route from Palermo to Naples. 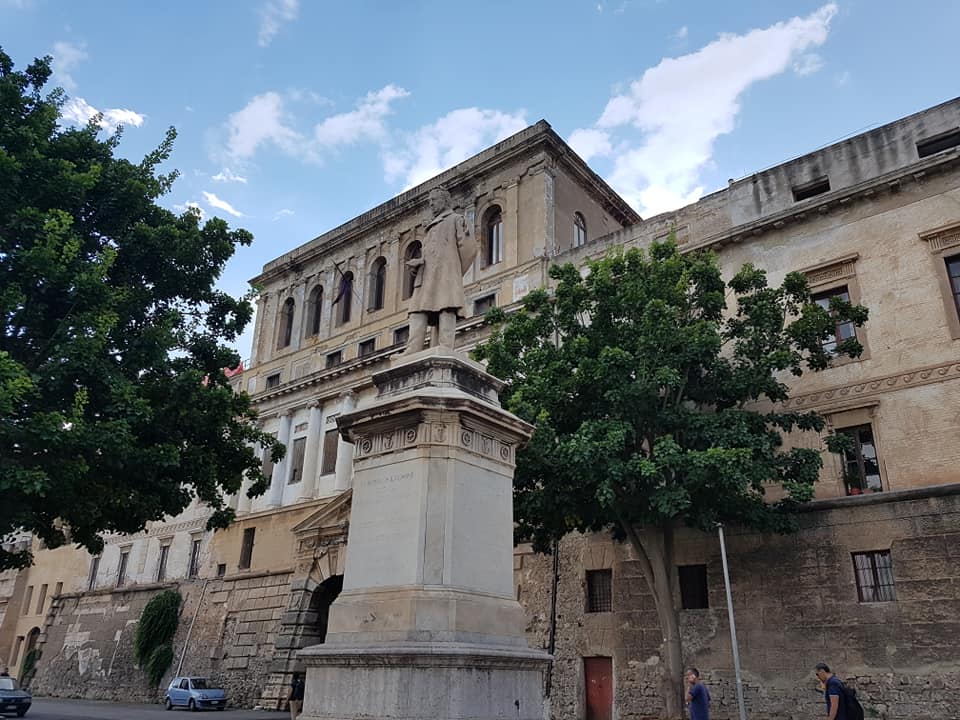 Along the seafront road in Palermo, closing what was once the noble district, on the corner with Via Lincoln, is this monument from 1784. It shows the name and coat of arms of Girolamo Grifeo with the motto “Noli Me Tangere” – To Overcome Everything. Grifeo was the VII Prince of Partanna, XXIV Baron, XVII Viscount of Galtellin, VI Duke of Ciminna and Duke of Gualtieri. He was the Praetor of Palermo and Senator of the Sicilian Kingdom. On the side facing the sea is a commemorative plaque requested by King Ferdinand. It’s located right opposite the most beautiful park and gardens. 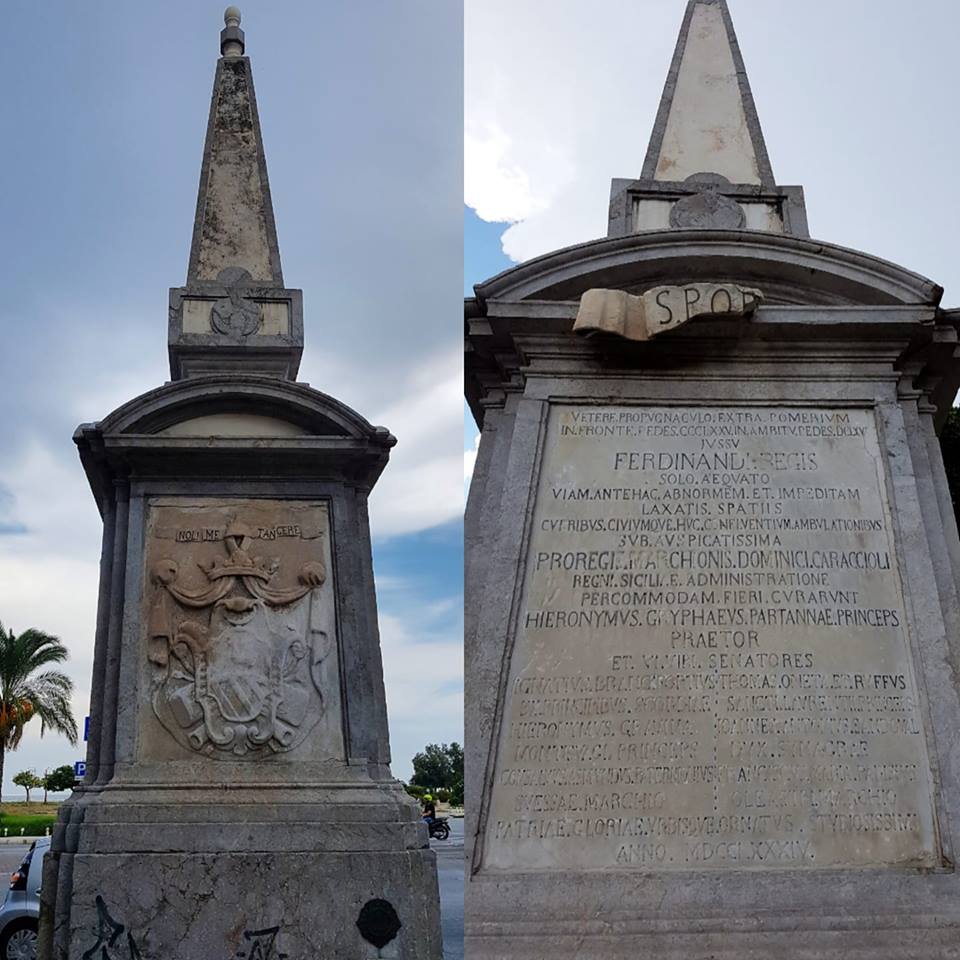 Quattro Canti, officially known as Piazza Vigliena, was built on the orders of the Viceroys between 1608 & 1620 at the crossing of the two main streets in Palermo, Corso Vittorio Emanuele and Via Maqueda. It split the city in to 4 segments.

The building fronts are in three tiers. At ground level is a fountain (representing Palermo’s four rivers), above those are representations of the season – autumn (N), winter (E), spring (S) and summer (W). The tier above has a Spanish king – Philip IV (N), Philip III (E), Charles V (S) and Philip II (W). The third level has 4 patron saints –  Sant’Oliva (N), Sant’Agata (E), Santa Christina (S) and Santa Ninfa (W). Above them? The sky!

It’s also known as Il Teatro del Sole – the Theatre of the Sun – because at any time of day, one of the four corners is illuminated by the sun. 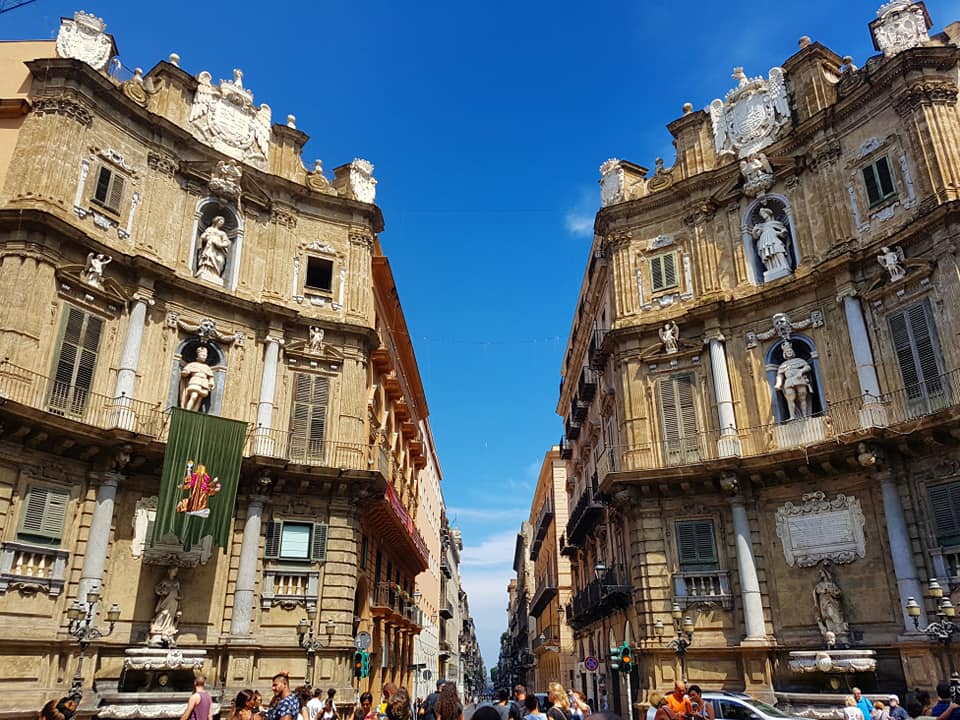 The Cathedral was founded in 1185 on the site of a former mosque, which was built on a early Christian basilica. During the 13th and 14th centuries the cathedral was gothicised and then after that the Spanish added a dome and Catalan style exterior. Remains of the Norman structure include the triple apse and the clock tower. Altered in the 1700’s, all that remains of the Norman era inside are the tombs.

One thing I will add –  Please respect your surroundings and cover your shoulders and legs when visiting the Cathedral or churches. Whilst they didn’t police it at the door, I saw a number of people given a dressing down by nuns. I was brought up Roman Catholic and always do this, even if you just wrap a sarong around your legs and pop a light cardigan on, respect the environment you are in. 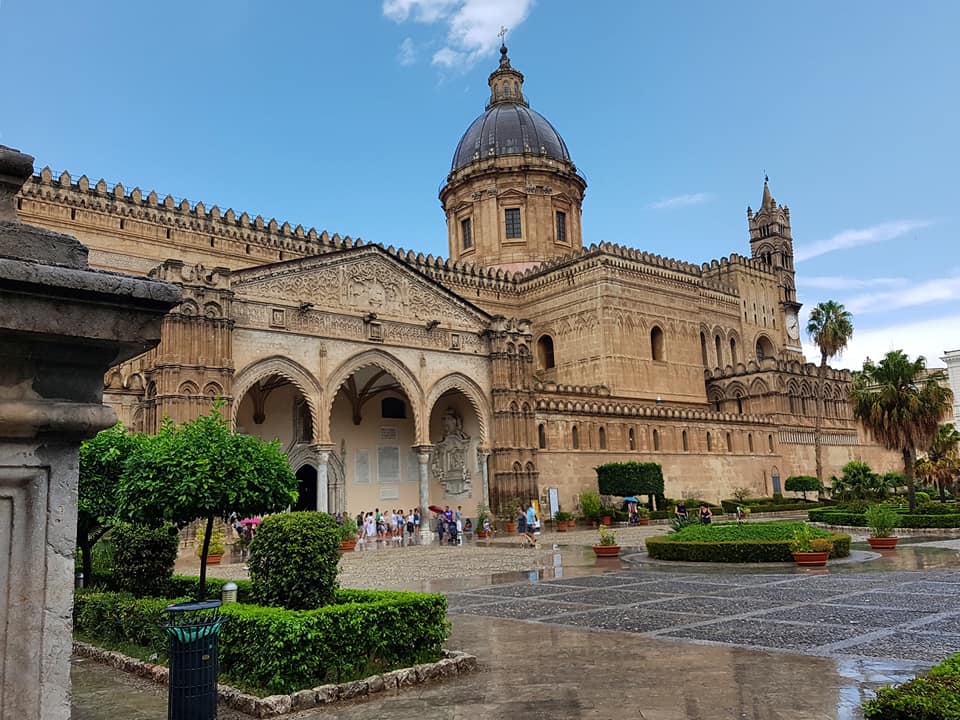 If you’re a fan of the Godfather trilogy (and who isn’t, let’s be honest) you’ll recognise these steps outside the Teatro Massimo in Palermo as being the location of the final scene of The Godfather Part III, and that silent scream by Al Pacino (Don Michael Corleone) which I consider one of his best scenes. It’s also the largest opera house in Italy and 3rd largest in Europe. 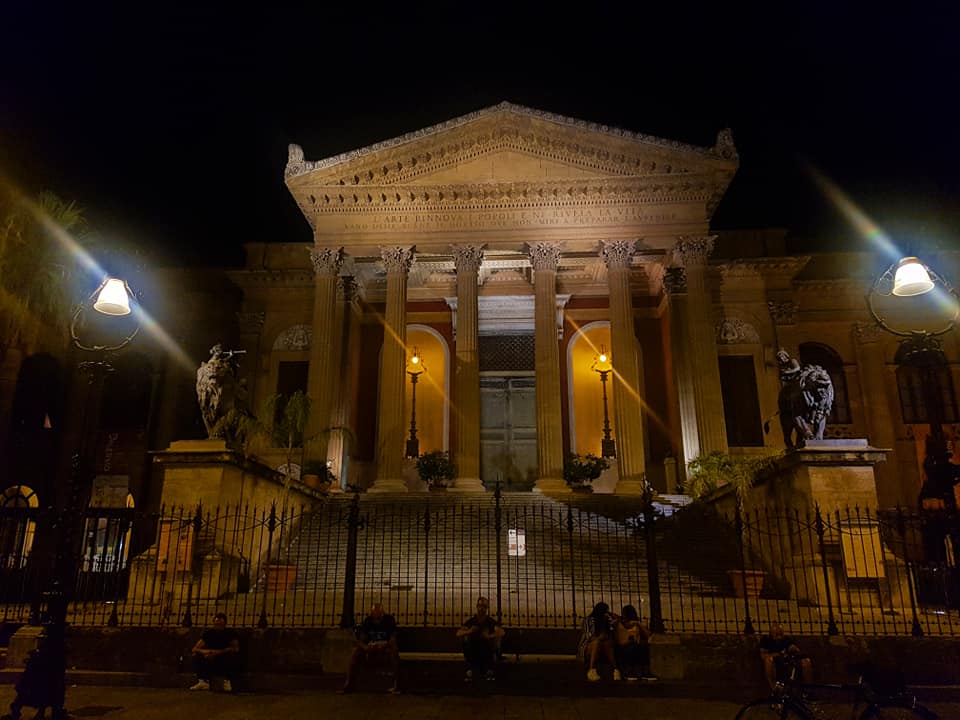 This is the Castello alla Zisa. Built in the 12th century by Arabian craftsmen for King William I of Sicily, it was completed by his son William II. It was built to be a summer residence for the Norman kings. Inspired by Moorish architecture, the name Zisa itself derives from the Arab term al-aziz, meaning splendid. 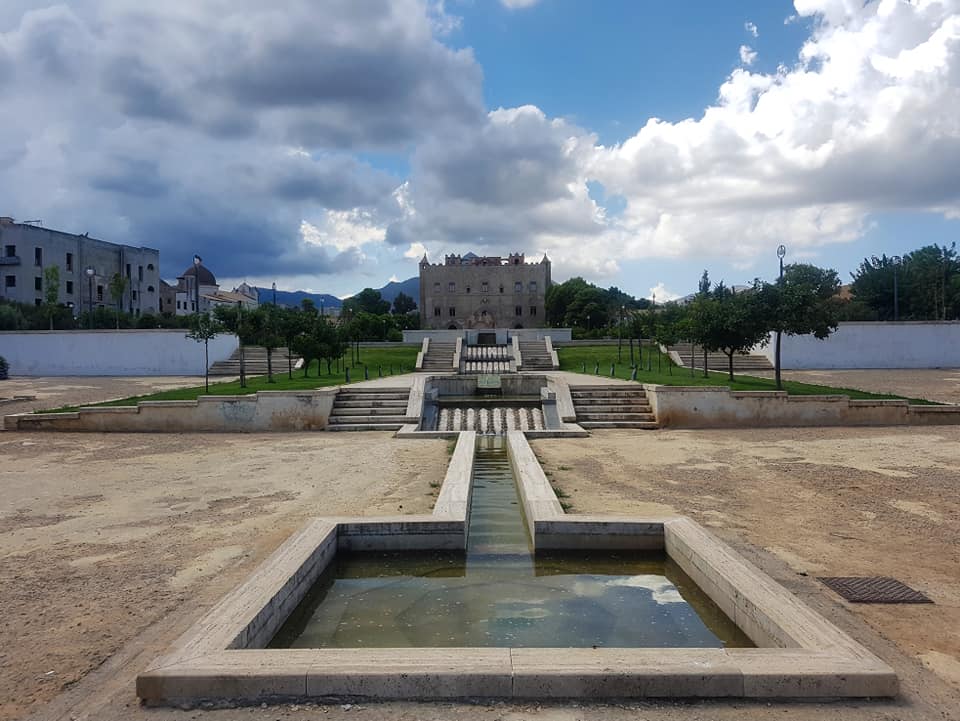 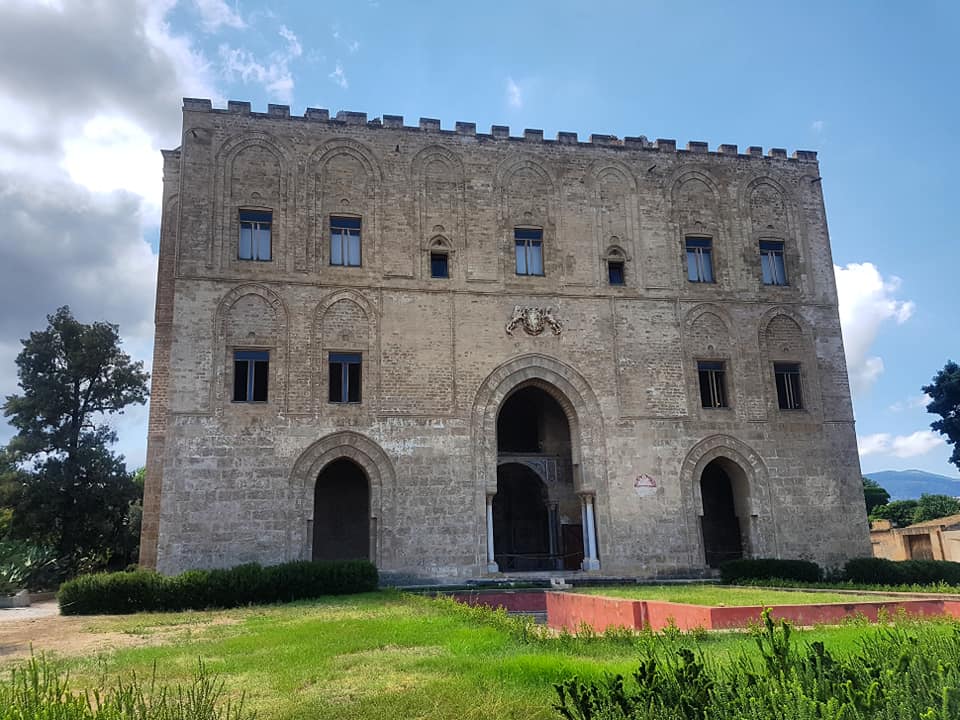 Ok, so I didn’t walk to this one… My bus to the airport didn’t turn up, so I had to take a taxi… Every cloud… He took me past via the Palazzina Cinese. In 1798 King Ferdinand IV, together with his wife Queen Maria Carolina were forced to flee Naples. They arrived in Palermo on December 25th on HMS Vanguard, escorted by Horatio Nelson. In 1799, King Ferdinand fell in love with the Chinese Casina and wanted his home in Palermo, amongst the lemon groves and hunting grounds, to reflect that… et voila! Horatio Nelson would have spent time here with the King. Told you I’d get naval history in somehow! 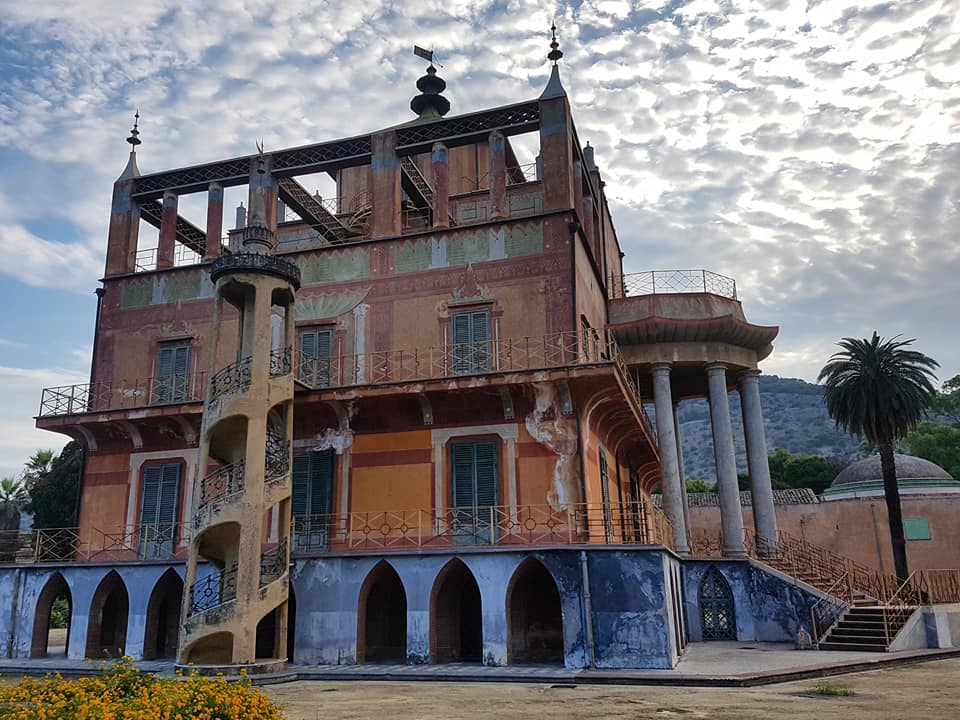 If I had more time, I’d have liked to head out towards some of the beaches and further afield, but I’m happy I ticked off what I managed to!