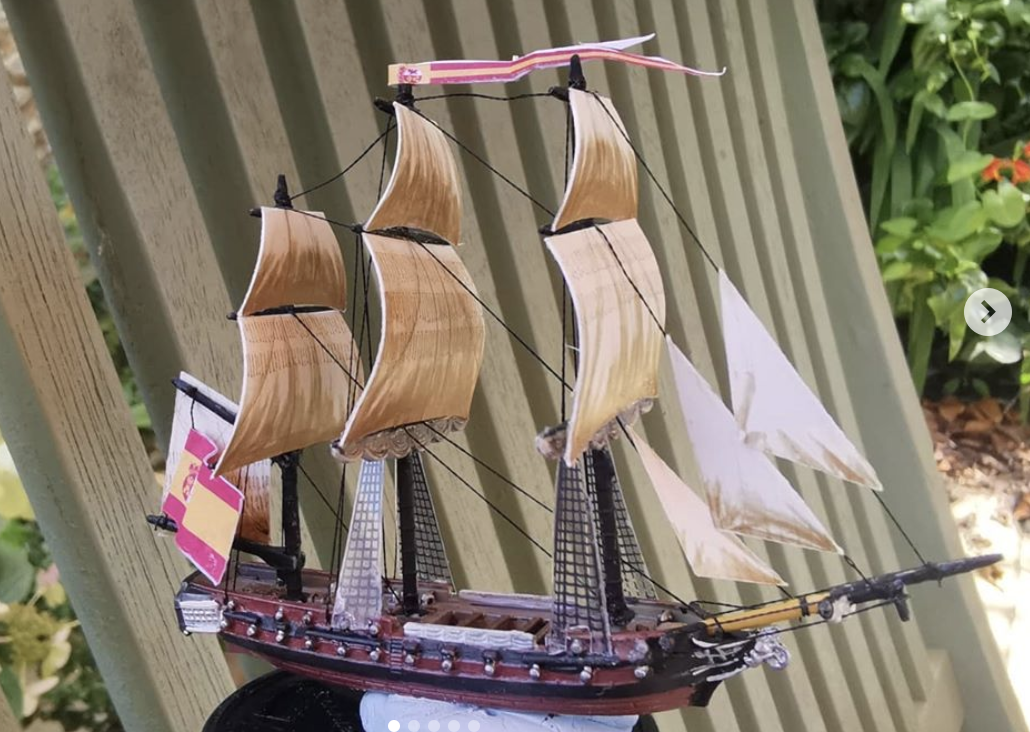 [Some items in this post were gifted from Warlord Games]

No, I’m not about to start telling you to grab Adses and Augers, don’t worry…

Back in May, I started to build teeny, tiny model ships. I know, I was surprised too. A few people I know had long been into painting miniatures and models and, the more I spoke to them, the more curious I was about doing the same. Warlord Games had recently released their Black Seas range, focusing on the age of sail… perfect, right? Yes, this is coming from the girl who was horrified that people spent their time painting “space soldiers” as a teenager and thought it was *the* geekiest thing imaginable. Mmhmm, I firmly understand karma has a way of getting you back for these things and now I finally understand why people take up the hobby! Sorry, fellow nerds…

I ordered a set of three Third Rates which, as it transpired, was probably not the most sensible option for someone who could barely draw a conclusion and was banned from even taking GCSE Art. I had this grand plan that I would (obviously) map out the Battle of the Nile with them, before realising how long, arduous and possibly expensive a task this would become, but as the eternal optimist I try to be, I went with these trickier ships, straight off the dock.

Was it going to end that well? Probably not.

I had tips from the aforementioned people and set to work. It wasn’t a disaster, but by no means was it tidy. As well as being not remotely artistic, I am also an incredibly impatient human and don’t like to be bad at things, preferring to be good as quickly as possible. Would painting change this? Who knew… 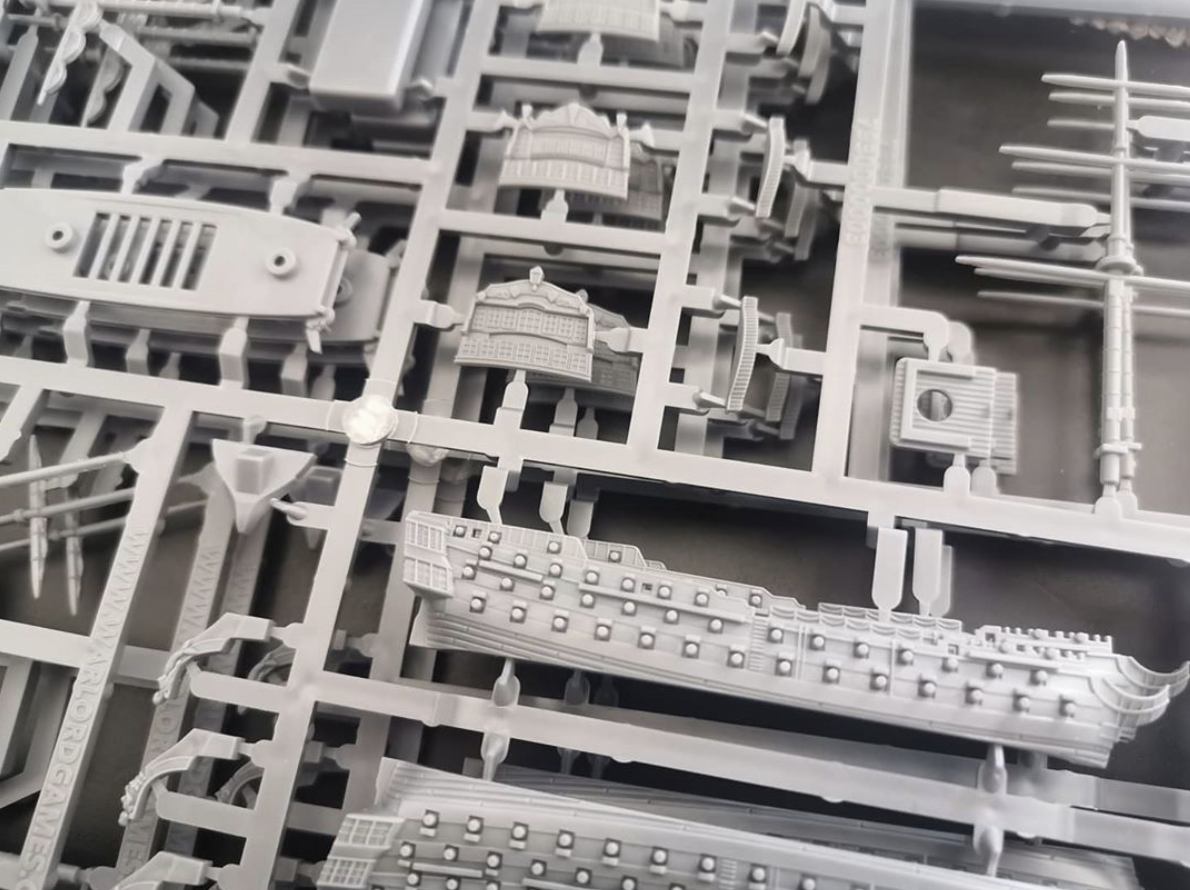 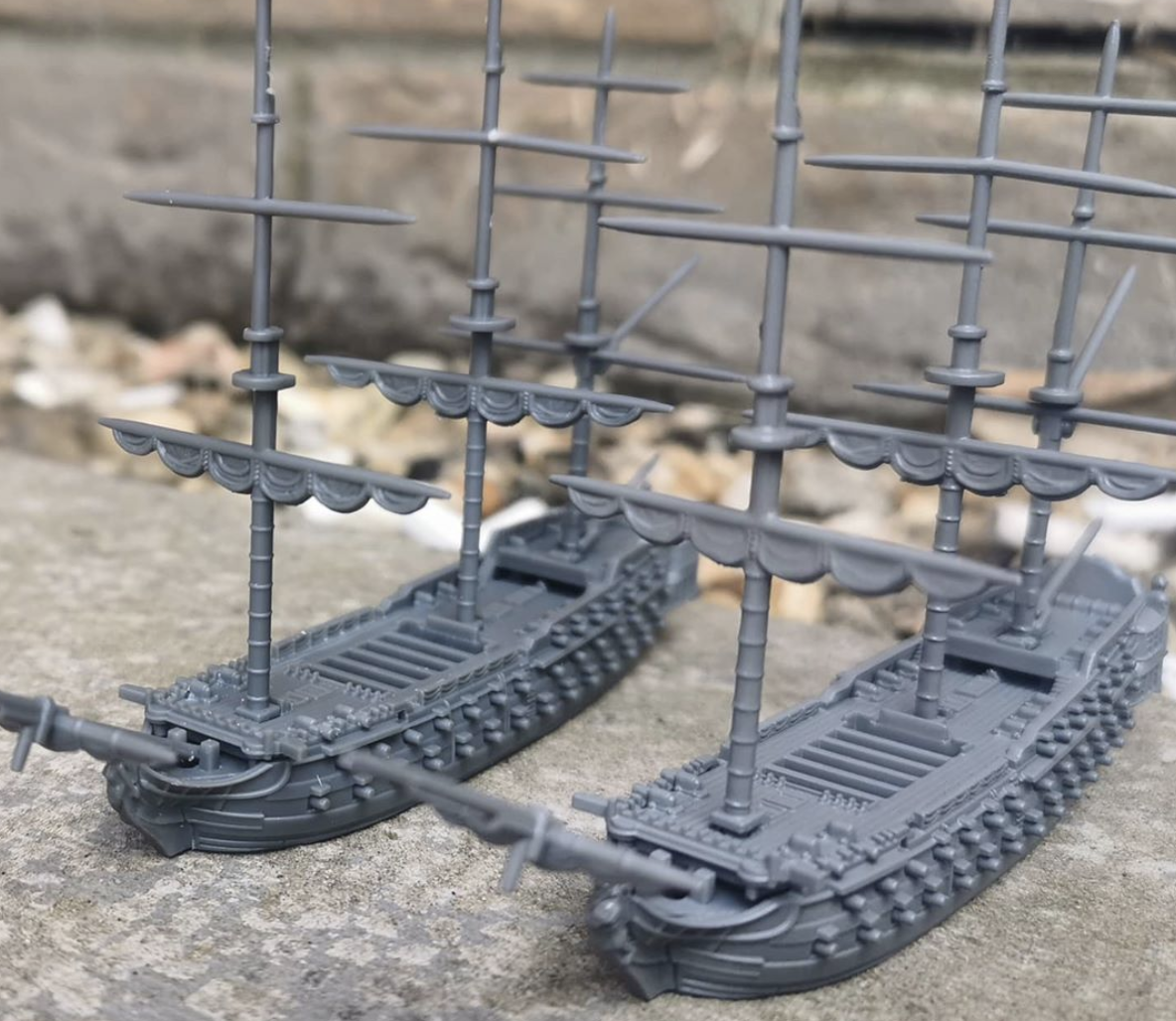 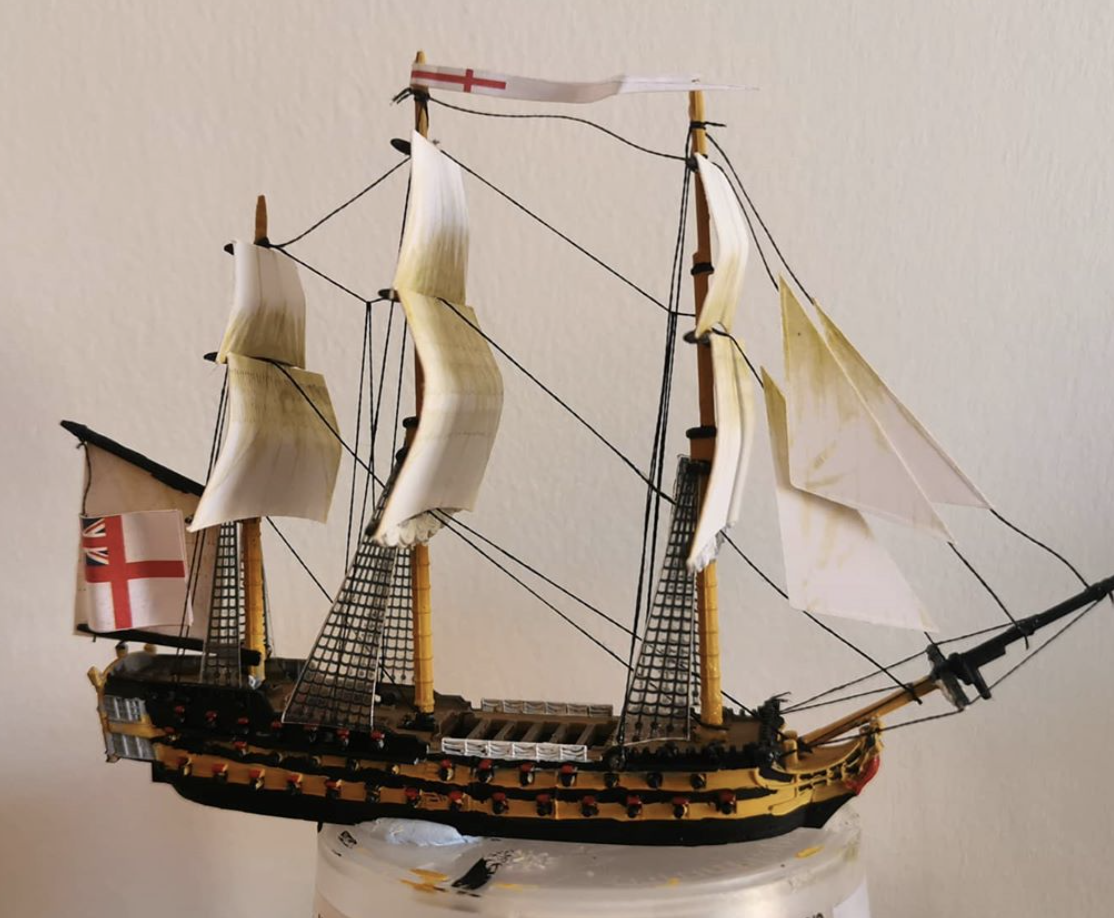 Those wonky lines… The shipbuilders at Buckler’s Hard would not be impressed! However, for my first ever model, I was mostly happy.

I persevered and it transpired that, after three ships, I was wanting to paint more. Not least because it was actually quite enjoyable, but more so because it’s incredibly therapeutic.

I am prone to overthinking and being quite an anxious human (to the extent that, this week, I seemed to tick everything off on a list about high functioning anxiety, which is fun?) and painting these teeny tiny miniatures at 1/700 scale helps me zone out more than any walk or bike ride ever has. I find that literal hours passed by where no thoughts entered my brain other than “try not to cock that line up, Jamieson” or “do I want another cup of tea?” both of which were novel and welcomed in what has been a pretty Kate brain-y few months. That being said I have picked up the wrong cup on a number of occasions… Acrylic paint water is not that tasty, FYI.

In June, the folks at Warlord Games kindly sent me the Master & Commander Starter Set, as well as HMS Victory and L’Orient (both of these are still in boxes until I’m happier with where my painting is) but here are a few progress shots of the frigates and brigs! Spanish and French, for a chance. The French frigate is based on the colour scheme of L’Hermione. 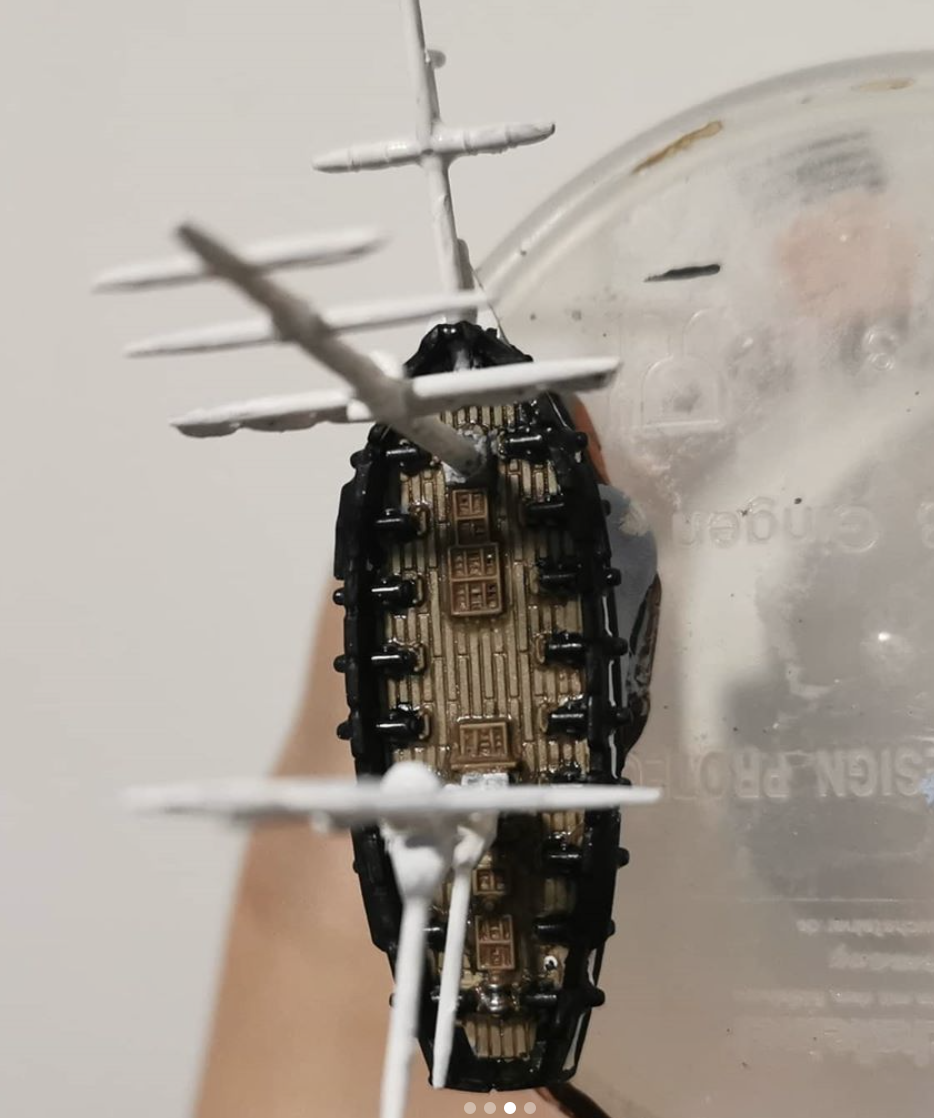 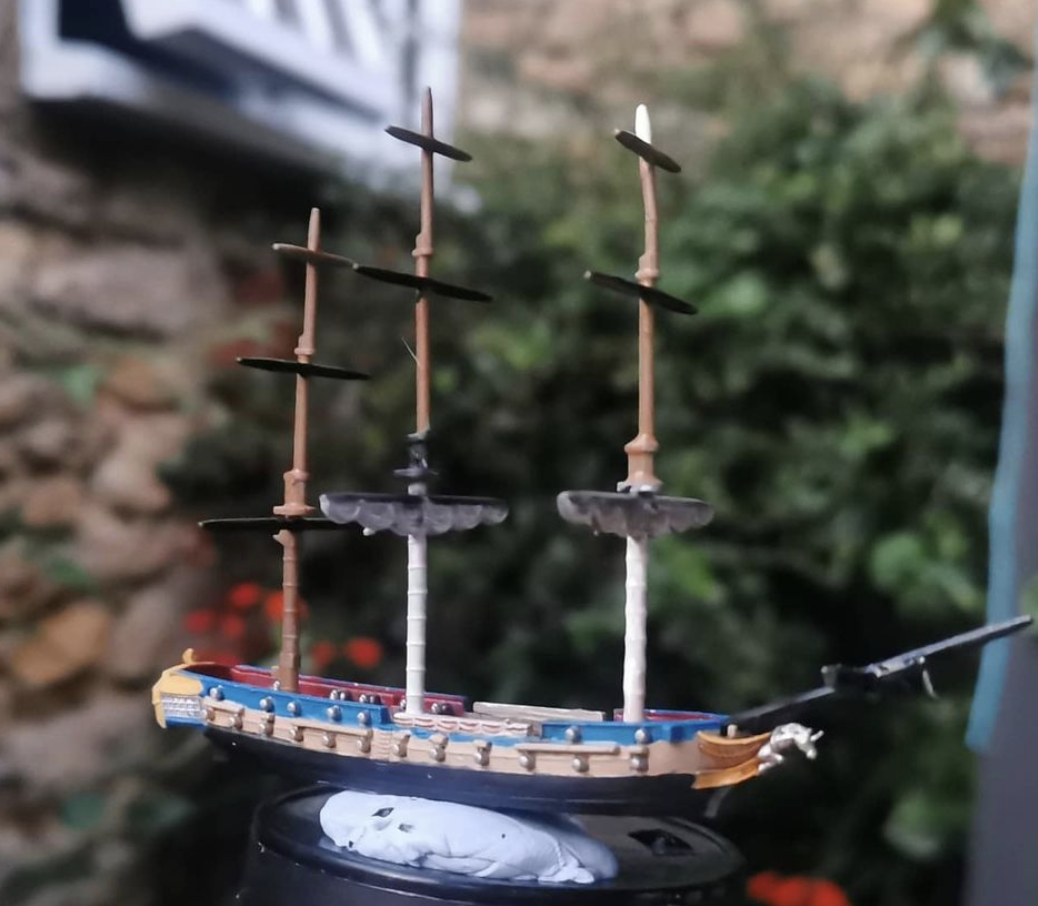 Still a bit of rigging to do on some of them, the lines are slowly getting straighter but I certainly improved my brain more than anything else and have found a new way to relax. I have taken to painting something whenever my “Kate brain” decides to jump to conclusions about life, and it has honestly changed me for the better. I am so much calmer and chilled. It is the most complicated activity I have ever found as well, so 30 year old Kate is very apologetic to everyone she judged in her head as a teenager. I completely get it now. I even went along to a few wargaming nights with friends before The COVID “Rule of Six” hit and had the best time!

I have found not just a new hobby, but new people to chat to online, as well as a way to enhance my love of naval history and relax my overthinking, anxious mind. Thank you to the people who got me started (you know who you are) and thank you to everyone on Twitter who has since given me feedback or advice on paint, brushes and all manner of things. I appreciate all of your comments more than you can know.

Most importantly, thank you to Warlord Games for making these sets in the first place! I have some fun painting adventures ahead of me.

If you want to follow my progress, then I’ve created a new Instagram account, just for miniature painting (a bit of naval history too… and a Baby Yoda – sorry, not sorry).