If you follow any naval history accounts or, indeed, any of the maritime Greenwich accounts on Twitter, you can’t have failed to see that today is the anniversary of the funeral of Horatio Nelson. As such, I felt it only suitable to join in with a short history of what was, for the time, an incredibly extraordinary day.

After his death at the Battle of Trafalgar it was agreed, by the King, not only that Nelson should receive a state funeral but that he would be buried at St Paul’s Cathedral. The Prince of Wales announced that he wished to be the chief mourner but, after both the government and King disagreed and felt it improper, it was decided that the pall bearers would be senior naval officers. The chief mourner would be either the First Lord or Sir Peter Parker, then Admiral of The Fleet.

Horatio Nelson’s body was still, at this point, preserved in a barrel of spirits, having been operated on by Beatty, the surgeon of HMS Victory, who wanted to find the musket ball that led to his death.

The decision was made for him to be buried in a coffin, made some years before, from the wood of L’Orient. The French flagship at the Battle of the Nile. The coffin was taken out to the Nore, where Nelson’s body was to be placed in to it, in order for him to arrive at Greenwich in dignity. Beatty removed Nelson’s body from the cask, took out the contents of his abdomen and chest and “wrapped them in a leaden coffin with brandy, camphor and myrrh”. His face was swollen and so it was agreed, due to the unrecognisable features, his face would remain covered whilst he lay in state. 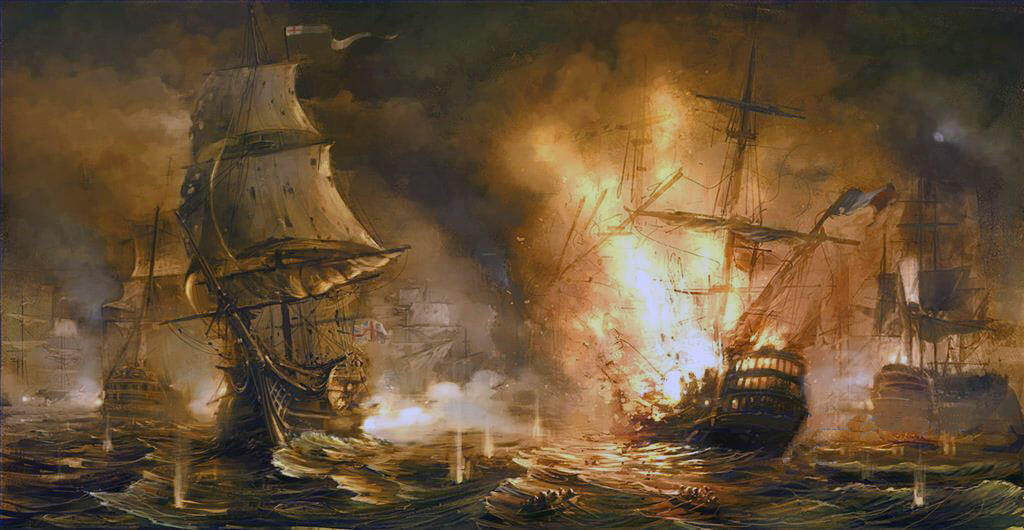 On Dec 23rd, Nelson’s body, within the coffin, was placed on the dockyard yacht, Chatham. As they sailed back up down the river, all forts and ships flew their colours at half mast and fired minute guns. They reached Greenwich on Christmas Eve, telling locals who had congregated they planned to land the coffin the following Thursday. That evening, the coffin was brought ashore. The date for the funeral was chosen on Dec 27th and it was to be the 9th of January, 1806.

Invites for the funeral were sent out to all the Admirals. One notable decline, despite being asked twice, was that of St Vincent, who felt that Nelson leaving Emma Hamilton as a legacy to his country “threw a shade on the lustre of his services” beforegoing on to say “that infernal bitch Lady H could have made him poison his wife and stab me, his best friend”.

His second funeral invitation was supposedly declined due to an eye infection, which did not stop him going riding the day after the funeral… for 3 hours. Eighteen other Admirals also declined, claiming poor health, gout, or colds. Thirty six did attend, including Sir Peter Parker, who acted as chief mourner, and Hood, who was then 80 years old.

The crowds gathered at Greenwich from January 4th to see Nelson laying in state and it’s estimated that over 20,000 people came to pay their respects. 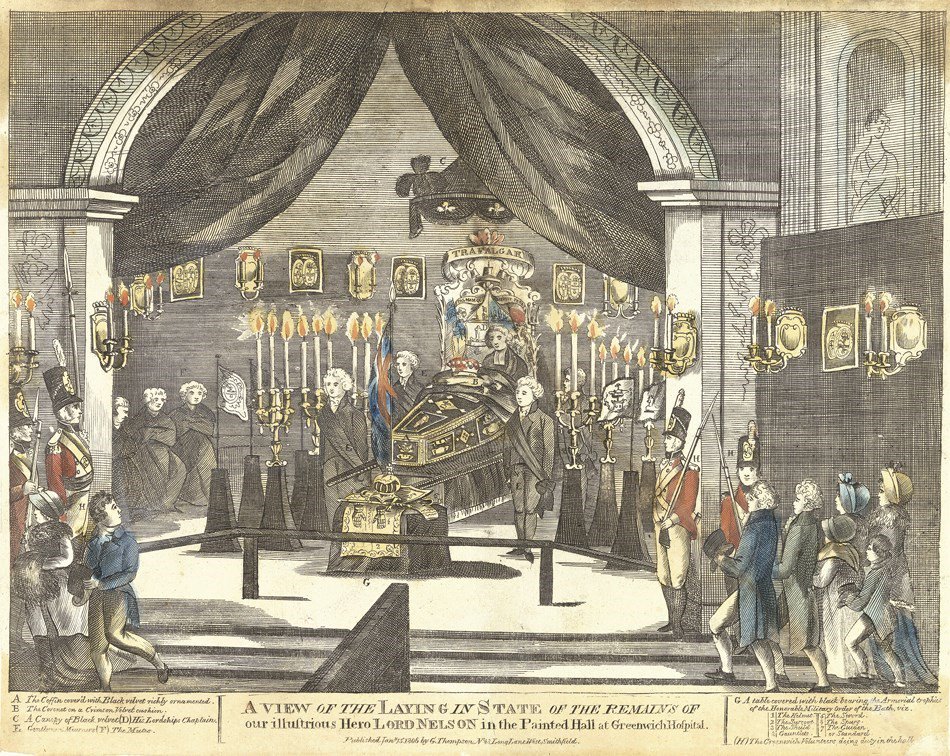 The day before the funeral, January the 8th, a crowd gathered to see Nelson’s body embarked, to be taken upriver to Whitehall as part of a procession of barges. So many people turned out for this event that many were injured. Records from the day show that the crowd were more than amused that Admiral Orde lost his cap in the gale, and it was blown in to the river. Orde was no real friend of Nelson, and it’s believed that he made hundreds of thousands in prize money at the expense of others. He took part in the funeral as a pall bearer, for the glory of it, and as a last minute substitution. The river had no other boats on it, and people lined the banks to pay their respects.

The coffin was taken to the Admiralty, where it lay overnight, accompanied.

On the day of the funeral, the gales had calmed. 30,000 troops lined the route from 8 in the morning, prior to the departure from the Admiralty at 11. People who did not have tickets for the funeral had been sat outside St Paul’s Cathedral in the cold since 7 that morning. Nelson’s body was drawn in a carriage, shaped fore and aft like the Victory, drawn by horses, and it took 3.5 hours for the 2 mile long procession to reach St Paul’s Cathedral. Within the cathedral, an amphitheatre had been built to seat 7000 people. Across the doorway were captured French and Spanish ensigns from Trafalgar. Over 180 naval officers attended, but neither Nelson’s estranged wife, Frances Nisbet, nor Emma Hamilton were there, as females were not invited. Musicians played the 104th psalm – “There go the ships, and threes that Leviathan” and by the time the service began it was dark and lit by lanterns.

At half past five, the body was lowered twenty feet in to a sarcophagus, initially made for Cardinal Wolsey, then seized by Henry VIII and sat at Windsor ever since. The Garter Kings of Arms recited Nelson’s British, Sicilian, Turkish and German titles and ranks over his grave. His staves of office as Knight, Baron and Viscount were broken and thrown below with his body, along with flags and ensigns from HMS Victory. 48 of her crew tore parts of this in the cathedral so that they had a piece to keep.

St Paul’s was filled with people until gone 9 at night and people were charged a shilling to view Nelson’s tomb. The funeral cost approximately £14,000 to organise. 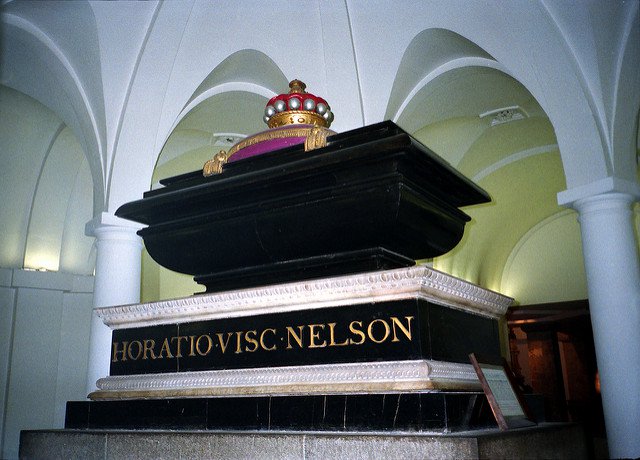