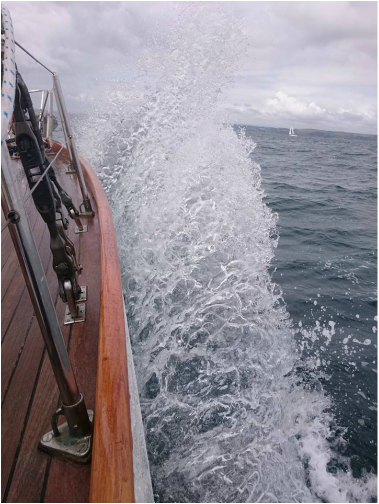 On Saturday, I headed off to Portsmouth to watch a day of sailing as part of the Louis Vuitton America’s Cup World Series. The America’s Cup, for those not in the know, is the oldest international trophy in world sport. The race has been going since I think around 1850. Created by the British and originally a round the IOW race, we’ve never actually won it… Which makes sense given the British track record with sporting achievements.

​Still, we had Sir Ben Ainslie on our side 😉

Land Rover BAR won the Portsmouth leg of this years’ event, meaning they’re currently top of the leader board (YAY) and we can only hope for the best going forward in to 2017!

I only took photo’s on my phone as I didn’t take my DSLR with me, but I thought I’d share a few. You can see that the weather was just amazing and I had such a lovely day, despite the sunburn…

Not a very in depth post today, but I had to write about it as it was just such a great day of racing. We had no idea of the route and which gates had to be taken because we (perhaps stupidly) decided not to buy a programme, but it was enjoyable nevertheless!

It’s made me super excited for Southampton Sailing Week in 2017! Read more about that on their website – Here.

Did you watch any of the America’s Cup Sailing? Do you sail?