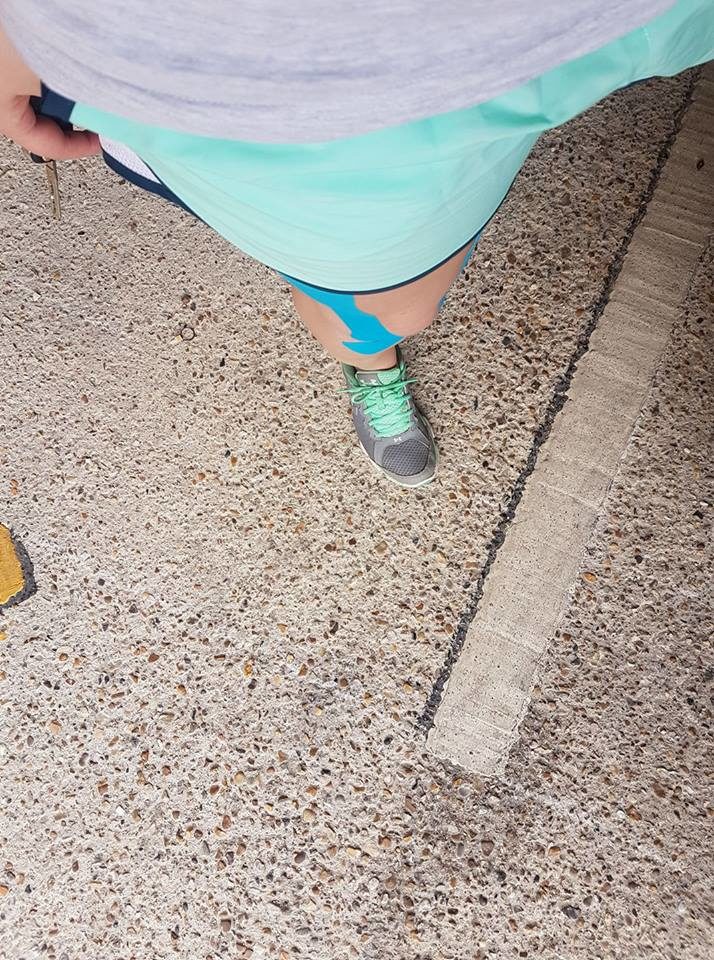 The knee is the most complicated and largest joint in our entire body. It’s the most vulnerable because it bears an enormous amount of weight and pressure, whilst providing flexible movement.

And so it takes a lot to repair it, when it breaks.

This is the story so far of my knee injury rehab, as people keep asking how it’s going… 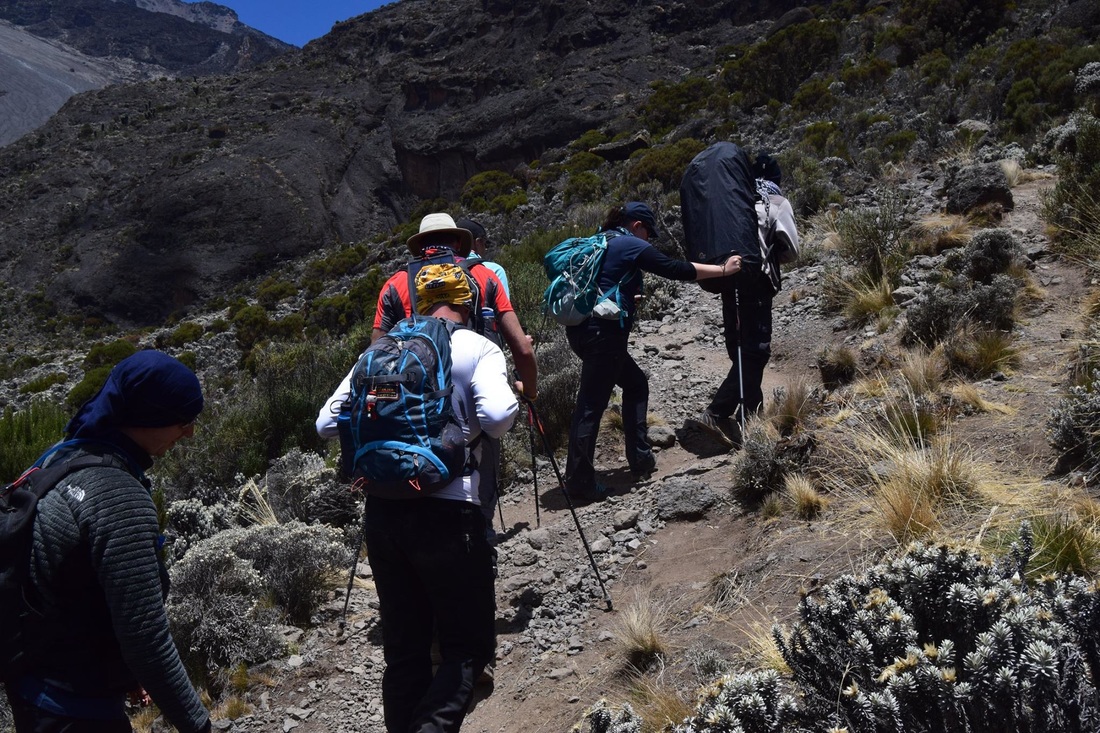 My knee injury compared to many isn’t that bad. I didn’t rupture my ACL or need it pinning. I just well and truly buggered it on Kilimanjaro.

In the above picture, we were past the Barranco Wall, on our way to our final camp before the summit. Looking at it, you see me behind our guide, head down, wandering up… What you can’t see is that I am in tears, grimacing and swearing because of the downhill just prior to this.

The day before, on the walk down from the Lava Tower to Barranco Camp, I lost my footing. Not a huge amount, my foot just slid on some scree… I was almost immediately crying with pain. My group stopped for a moment as I said I was sure I’d just twisted it funny. On every step from there on, I was putting as much of my weight on my poles as I could as I was in so much pain. When we reached the Barranco Camp I did what I knew… rested, Deep Freeze gelled it up, took ibuprofen and elevated it. It was throbbing and swollen but slowly as the evening progressed, I was able to walk on the flat, so thought nothing of it. The next day we were due to ascend the Barranco Wall, my guide asked if I was ok to go on (not that I had much of a choice) but my knee was feeling good (despite now being purple) I got up the Barranco Wall with no difficulties, and no pain… Good news, or so I thought.

And down it came, rapidly and sharply. I was in tears, taking the babiest of baby steps. The group decided we would go at my pace (thanks, guys) as they could see I was in pain and so there I was up the front with our guide.

At one point I just slid down on my bum as it hurt far less. 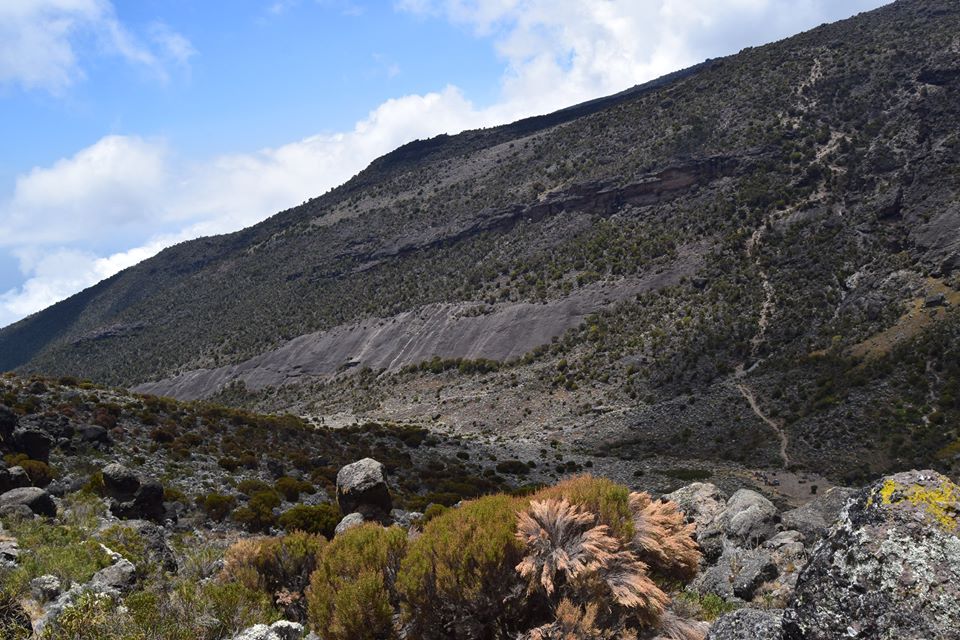 Nevertheless, not one to let the side down, I carried on and, as we reached another ascent, I made up speed. I figured out that it was only on the downhill that I was having a problem, so made up the pace and speed on the flat and uphill sections. Reaching the Barafu Camp, I did the same as before, but with an added tubular bandage… Nothing was stopping my summit the next morning except altitude sickness, and as I’d had none so far, I felt confident. As it turned out, I had no altitude symptoms for the entirety of my trip.

Summit night was cold, I don’t remember a lot of it was I was so focused on just making it to the summit. Step by step we made it up, the sun rose at around 0415 and bathed is in some relative warmth. We reached Stella Point and my knee was even hurting uphill at this point. My guide suggested we stop here if I wanted to as ‘I had reached the top’ but I’m a stubborn arse and I felt fine other than my knee, so took some ibuprofen, necked some water and we continued on. As I felt fine, we stayed on the summit for around half an hour to rest, then headed back down. If you’ve reached Uhuru Peak, you know the final push is pretty flat, and so I was pretty much ok back down to Stella Point, but from there the quickest way down is through ash and scree. Again, I’ve blanked on so much of this, all I really remember is Mzui giving a passing porter my pack, putting my arm over his shoulder and running me downhill. I was hyperventilating and crying because of the pain and when we reached the bottom had 2 porters to help me limp back to my tent.

I stopped for some more ibuprofen, which at this point I was taking like smarties, and fell asleep for half an hour before we set off back down the mountain proper. After another 2 hours of limping and hobbling my knee gave out, I fell on my face and pulled myself up on my poles. My guide decided this was where we would grab a stretcher. In I got in my sleeping bag (guide’s orders), I was given some painkillers which looked like hundreds and thousands, was bungee corded in and run down the path by a team of porters and my guide. I could see Disney characters and boats in the clouds, so to this day I remain unsure what the painkillers were, but they were fantastic. I had to get out of the stretcher at one point after being vertically dangled down a part of the path (I’m not kidding) as it was too rocky, so on I hobbled. I must have dozed in and out of sleep through sheer pain and exhaustion as all I remember was the sound of monkeys in the trees and people shouting “go! go!” and “brakey! brakey!” 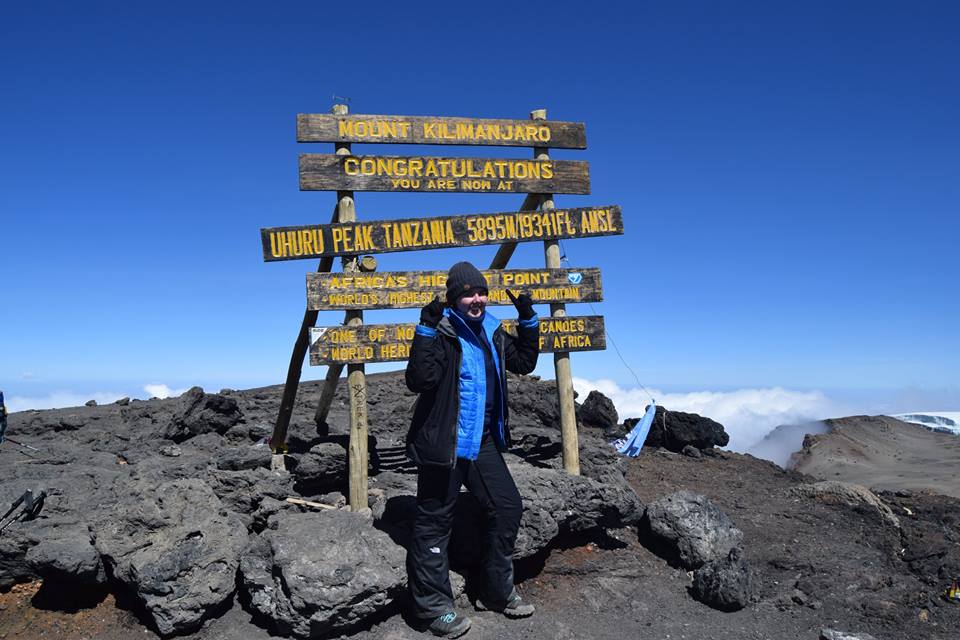 I got home, hobbled off the plane, leaning on a trolley, and the first thing I did when I got home was dump my bag and get mum to drive me to the Dr. He figured it was probably torn cartilage, and told me to rest it, take ibuprofen for a month and go back if it wasn’t any better. That was October 2016.

It didn’t get better. I ended up on crutches for a month, whilst waiting for an MRI scan, booked in January 2016, which told me that what I had actually done was dislocate my kneecap, rip the patellar tendon and tear the meniscus cartilage. Every step I took downhill was re-dislocating the kneecap… hence the pain.

I started physio with the NHS, but after she gave me and an 80 year old, who had just had a knee replacement, the same exercises, I decided to go private. This wasn’t cheap, but it seemed to do the trick. After around 4 months of intense physio sessions, thousands of single leg dips, taping and ultrasound treatment I was out on the hills. I went off to the Alps, did some mountaineering on less than flat terrain and when I got back, an entirely different part of my knee started hurting.

Due to the focus on the repair of the Hoffa’s pad, the patellar tendon was being used in a different way, and the front of my kneecap gave me a shooting pain every single time I walked downhill, wore a slight heel or walked downstairs. Here started another phase of physio to focus on that… We started adding weights to load the knee and replicate load bearing exercises like hiking downhill.

Eventually, in November 2017, this pain disappeared (and touch wood, has done to this day) and so at the first sign of snow in the UK, off I popped to Snowdon with OS Champions Tracy and Jason. Up we went in the snow, over ice, over rock, it was amazing. My knee felt perfect, it was the best way to spend a morning, and then I had to walk back down to Llanberis. Around 1.5 miles from the end, a different part of my knee again started to hurt, the back. I couldn’t work out why as I hadn’t damaged the back of my knee, so put it down to me walking like an eject trying to guard the knee.

It stopped, I carried on walking and even did some of the steeper parts of the SW Coast Path with no difficulties or pain and then the snow came again in March of this year, so it was off to the Brecon Beacons. Again, no pain until I walked downhill and the shooting, searing pain in the back of my knee had returned.

Of course, like Snowdon, I ignored it and just rested it, iced it and left it to its own devices, until it was sore on a New Forest walk (the flattest one ever as well). 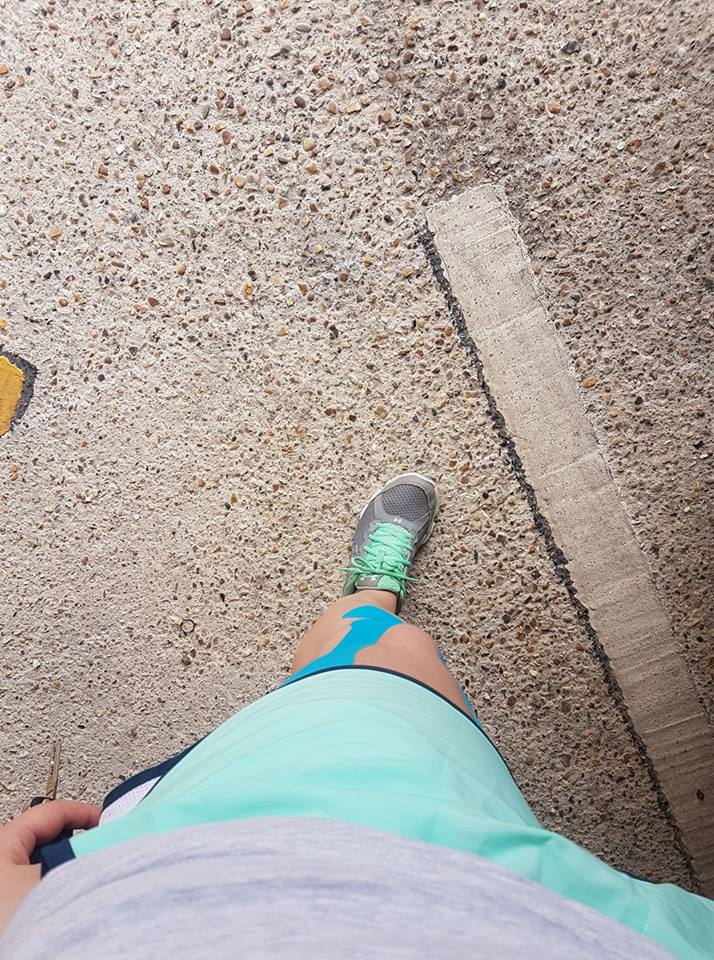 Back to the physio…

That was one month ago (April 2017) and it turns out I should have gone to the physio after the first pain on Snowdon as I have semitendinosus tendinopathy, roughly translated as a pain in the arse. It goes from the tendon connecting the hamstring to the knee, up to the glutes, trapping the sciatic nerve in my case. It’s also causing pain in my upper calf and ITB. So, now my rehab is a lot of foam rolling, a lot of hamstring work and a lot of finger crossing for peaks this summer… Being quad dominant, the thinking is that by doing all my physio, it’s created a muscular imbalance and this is what’s caused it, so pretty much every day is now leg day.

Some people seem to injure their knee and be up and running (literally) within a number of weeks, but clearly I am not that fortunate!

We can but hope that by summer I will be back in the Alps, not limping or taped up! I don’t think that will have answered anyone’s questions on fixing it as such, as every knee case is different, but as you kept asking about the knee, I thought I’d get it written down! It’s frustrating, as every time I think it’s fixed, something else has gone wrong, but these things are sent to try us, and I know that if I can get to the top of Kilimanjaro with a busted knee, I’m sure as hell not letting it stop me do anything else!