I am now 2 weekends down on my Trafalgar Way bike ride.Due to work commitments I am having to do this in stages, because I can’t take time off during the week.

This weekend I returned to Cornwall and continued my 271 mile journey from Pendennis Point in Falmouth to The Admiralty in London to raise money for The Duke of Edinburgh’s Award.

Across Bodmin moor and in to Launceston, you head in to the town centre and the plaque is on the front of the White Hart Hotel in the main square. From here you cycle out through Southgate Arch, the last remaining medieval gateway into Launceston, which dates from the time when Launceston was the only walled town in Cornwall. 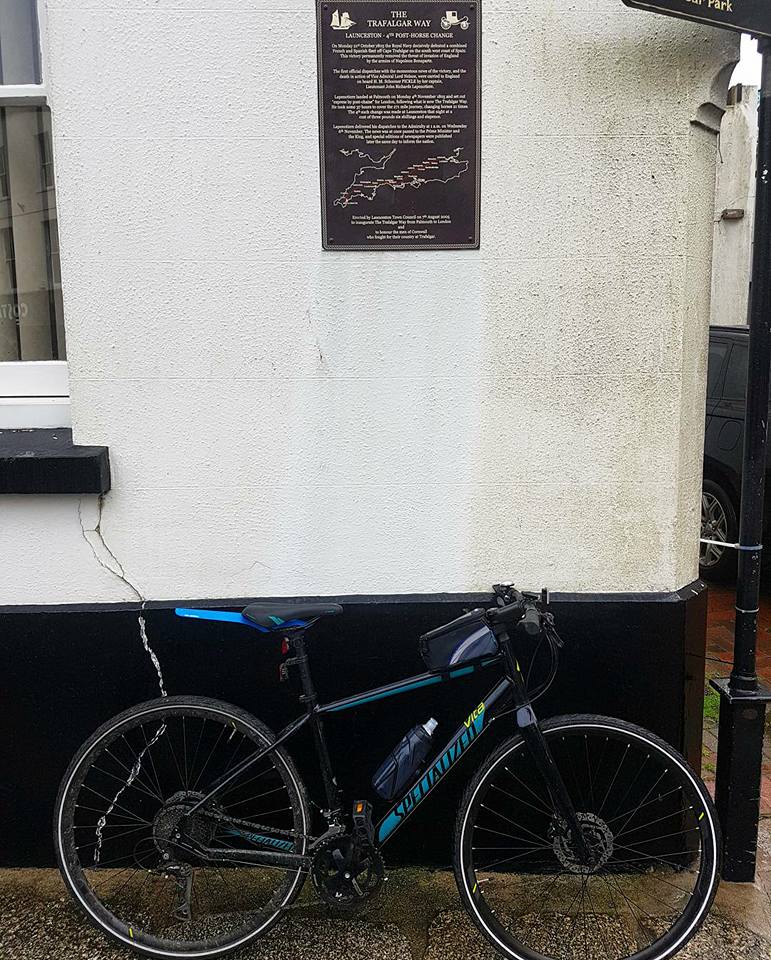 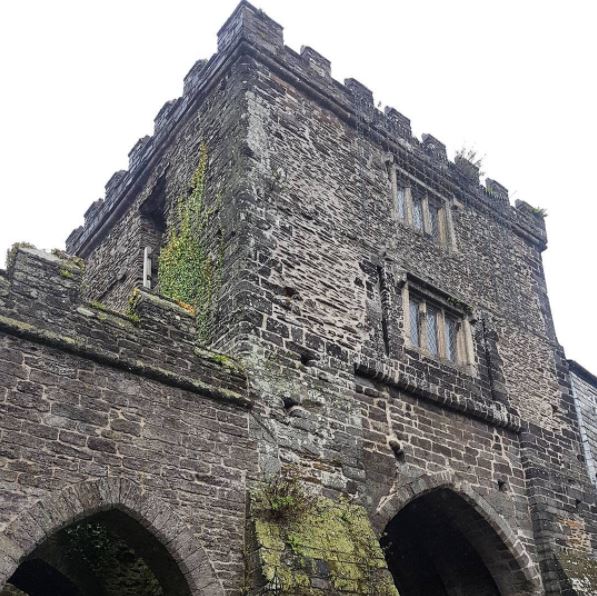 As you head out of Launceston past the Rugby Club, you start to climb up the hill, and about 1/4 of the way up, you hit Devon. This is marked by the below sign. The first road sign I’ve come across so far letting me know I’m on the right route, as apparently not every town/village wanted to pay for them! 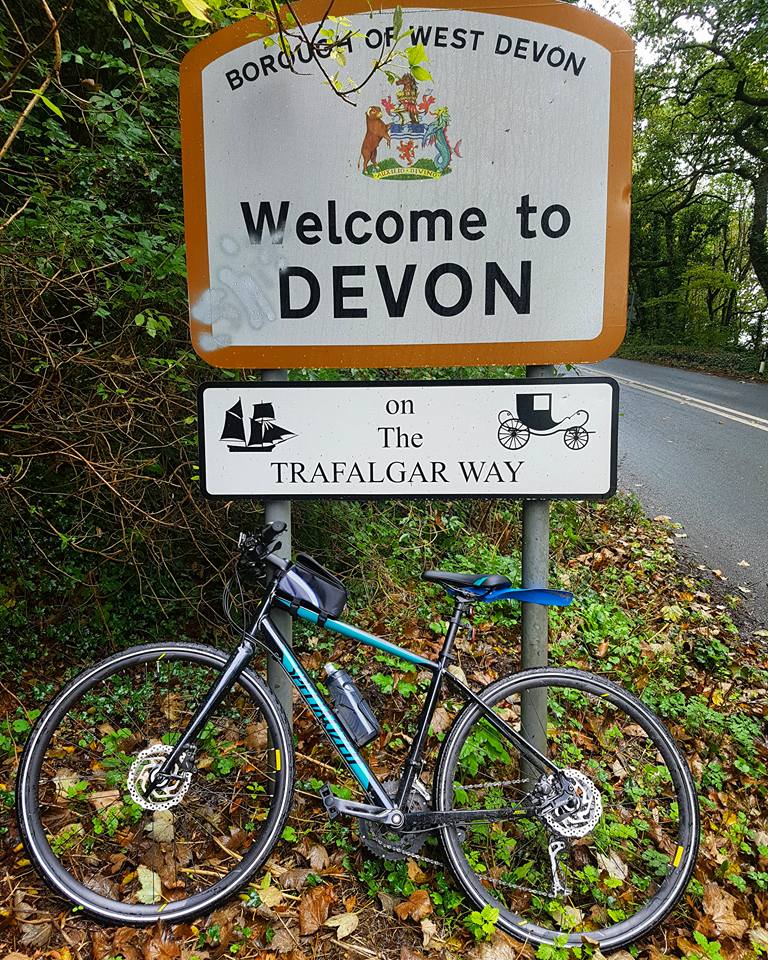 Obviously, I had to take the obligatory selfie! 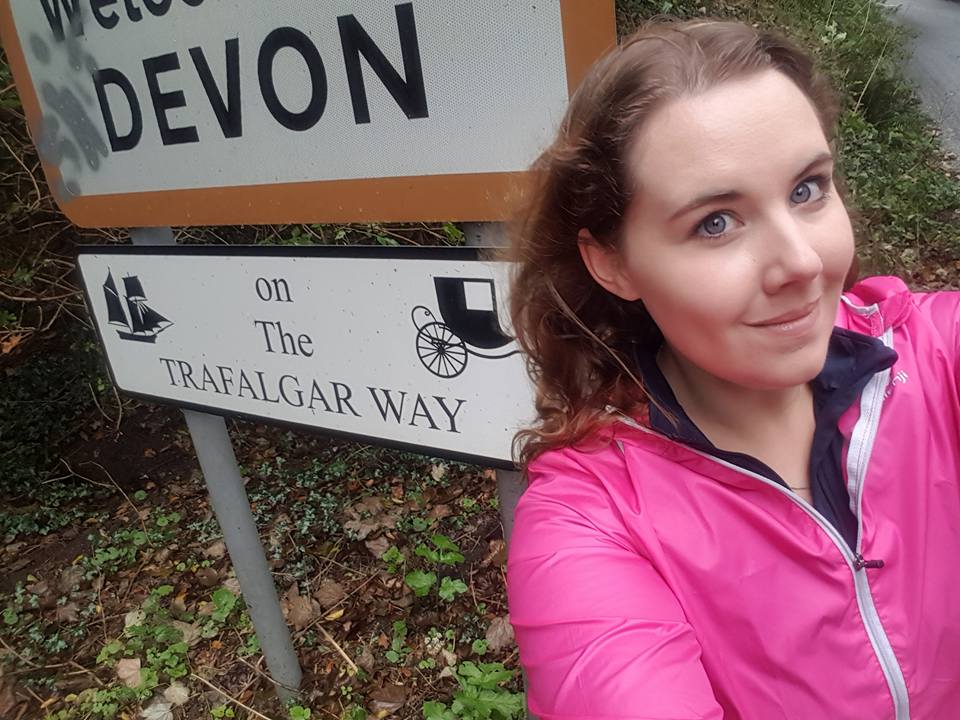 From Launceston you head to Lifton. This is the shortest leg so far at around 2.5 miles and if you’re reaching Launceston in the middle of the day (or at any time really) there’s a brilliant farm shop en route. They sell some of the best pasties (despite being in Devon) and have a restaurant/shop etc… It’s a good spot to break up a ride if you need to!You then cycle down the same road for around 1 mile, in to the village to reach the next plaque, on the side of the Arundell Arms. 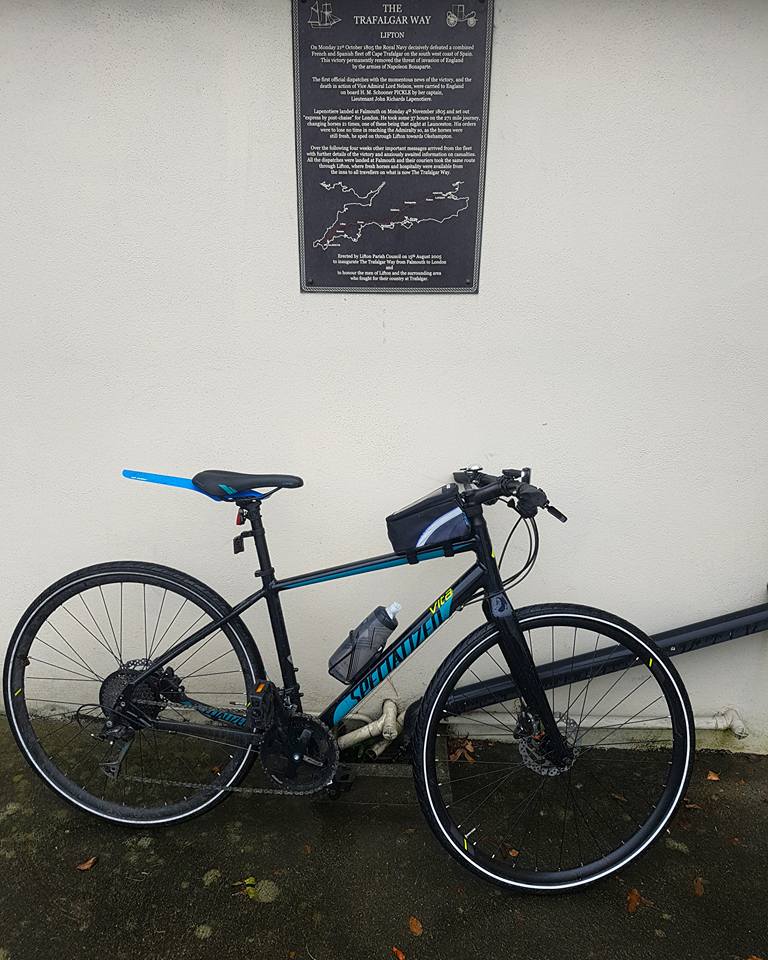 Ah, those famous Devon hills… The hills in Cornwall were mostly short, sharp climbs but in Devon they seem to be long, slow hills that go on forever! The first of these is on the road out of Lifton and you have another couple along the road to Bridestowe!Follow the signposts in to the village and the plaque is in the main square, opposite the pub.

Again, a lovely spot to stop if you need to and they had a roaring fire when I got there, ready to warm through after getting soaked through! 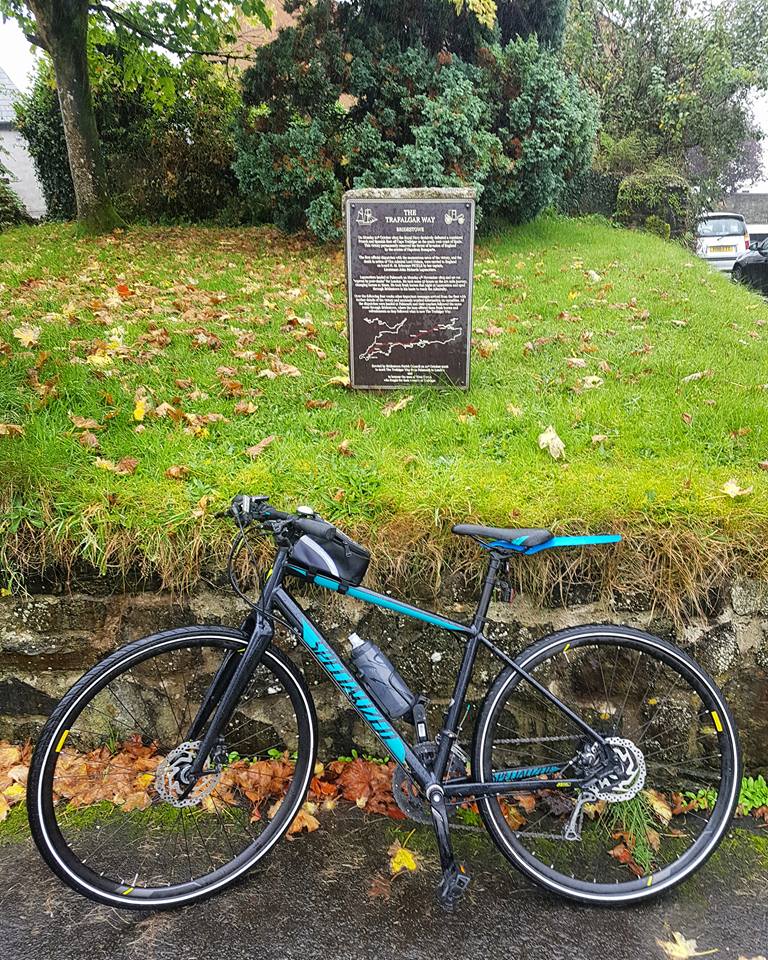 I also found my dream house… 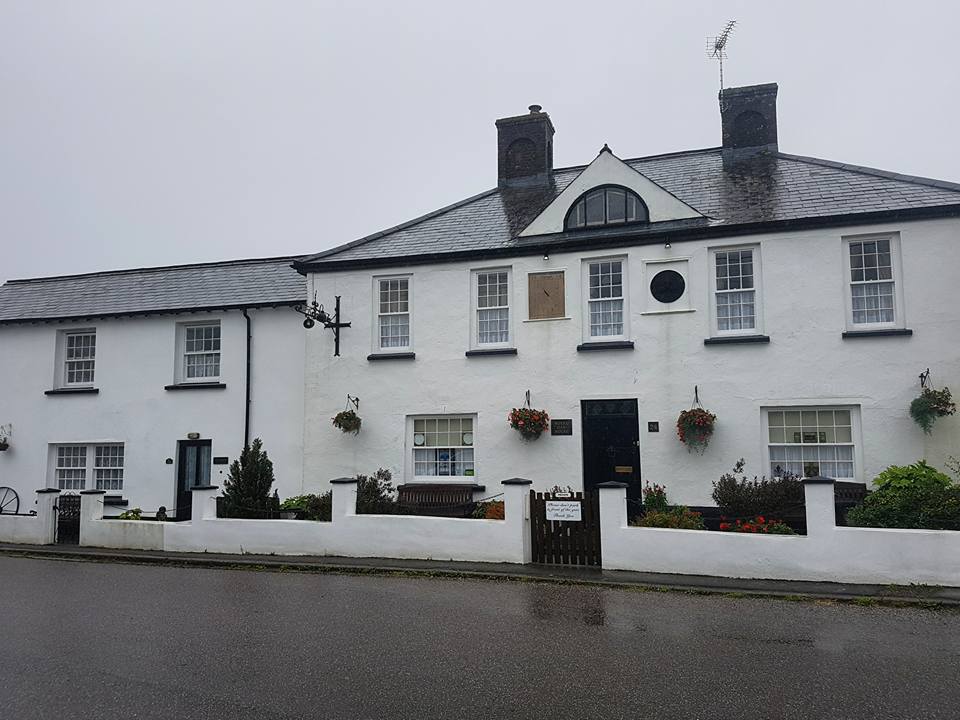 From Bridestowe, climb out of the village and head out towards the A30, you have to ride along for around 1/2 a mile and then take the turning off that’s signposted Meldon. Those of you who like Tor bagging on Dartmoor will know this well as the turning for the reservoir close to Yes Tor and High Willhays, but instead of turning right, you head left and drop down a brilliant hill in to Okehampton. Opposite the traffic lights you will find another White Hart Inn, and the plaque is right next to the front door.

Heading out of Okehampton you have another of these famous Devon long, slow hills. You will ride past a brilliant building painted with a mural of Dartmoor on the side.If you can’t own a house on Dartmoor, why not put Dartmoor on your house? 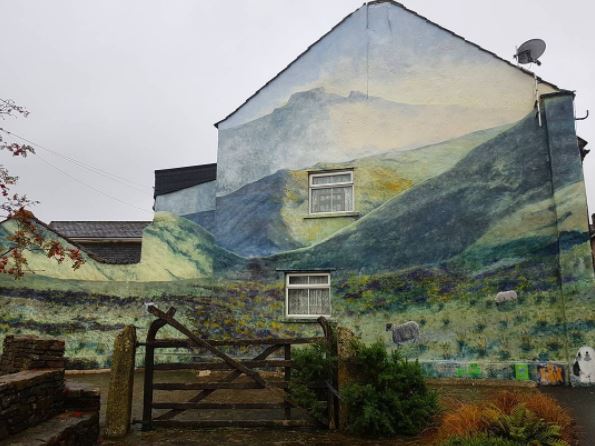 From Okehampton, it’s a fairly level ride out, before you drop down in to Sticklepath.On the main road you will come across The Devonshire Inn, easily spotted by having Port & Starboard lights by the front door. Opposite the main pub you can’t miss the outbuilding which has been painted with Horatio Nelson’s famous signal given at the Battle of Trafalgar – England expects that ever man will do his duty.

The plaque is also on the side of this building.

This had to be my favourite plaque so far, purely because it had something else alongside it! 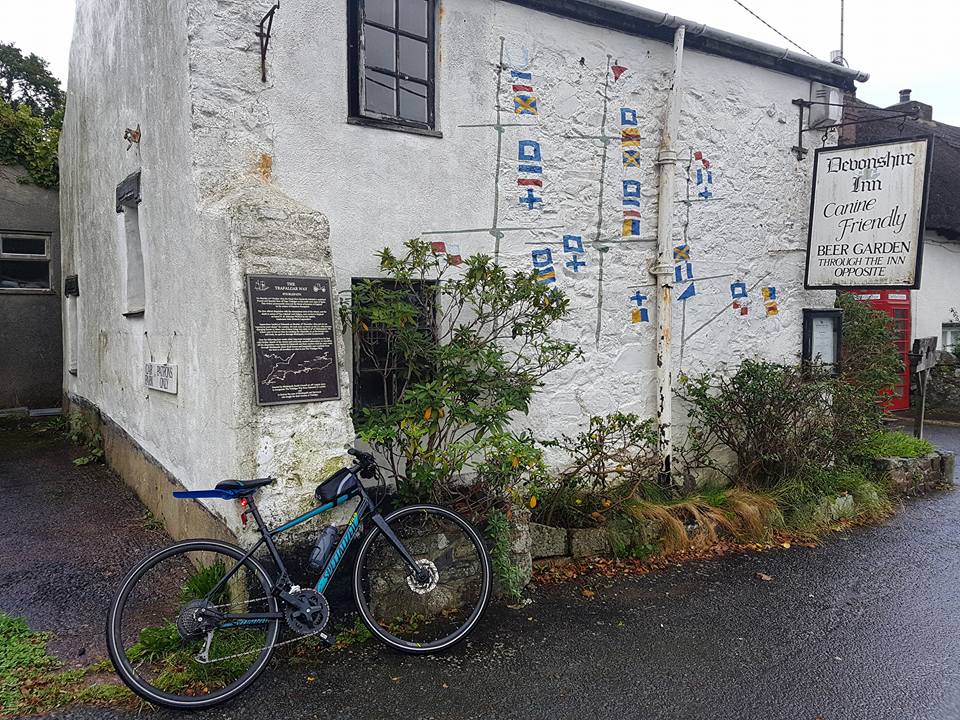 The chaps in the pub in Bridestowe forewarned me about the hill that climbs out of Sticklepath, so I knew it was coming at some point, and they weren’t wrong… Two false summits later I finally reached the top, and had to meet mum in a lay by for a water bottle refill and something to eat!Eventually, after a couple more big hills (which, thankfully also meant some speedy downhill segments) I reached Crockernwell.

This was the first plaque to also have the history of The Trafalgar Way next to it (inside the bus shelter) though it had faded somewhat since 2005! It was also on a hill, so slightly out of shot is a hand holding the bike up to stop it heading off without me! 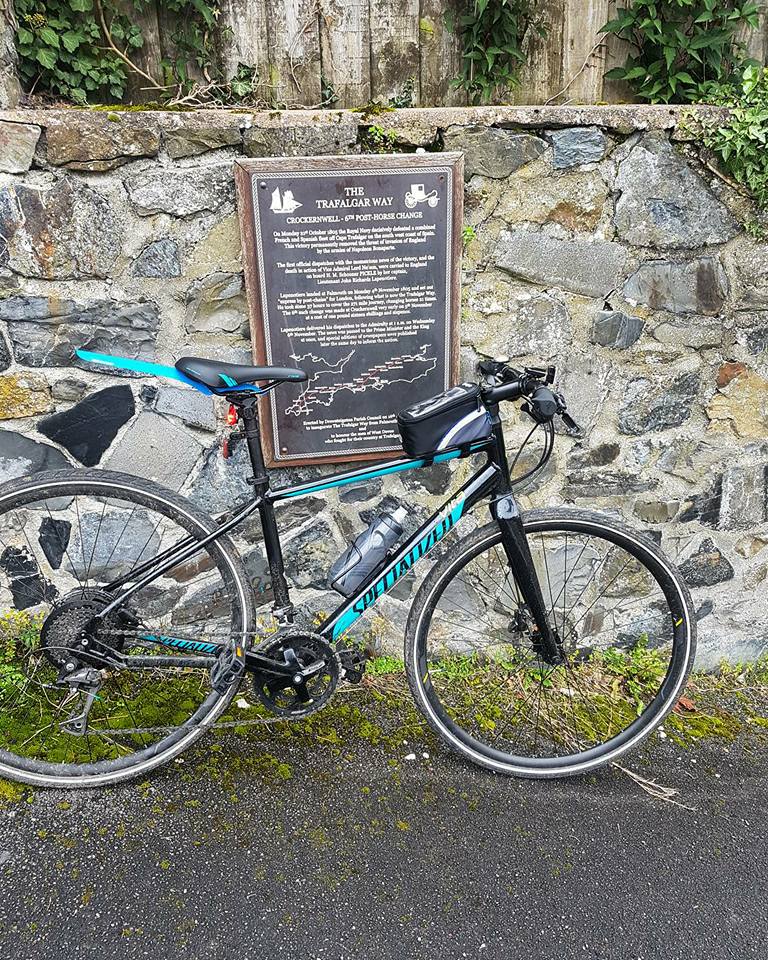 After Crockernwell, you head out to Tedburn St Mary. Online the plaque is details as being on the side of The King’s Arms pub, but it’s not. This is likely to have been the pub the coach stopped at, but the plaque ia actually around 50m down the road, on a modern wall, next to a bench.​Found it eventually anyway! 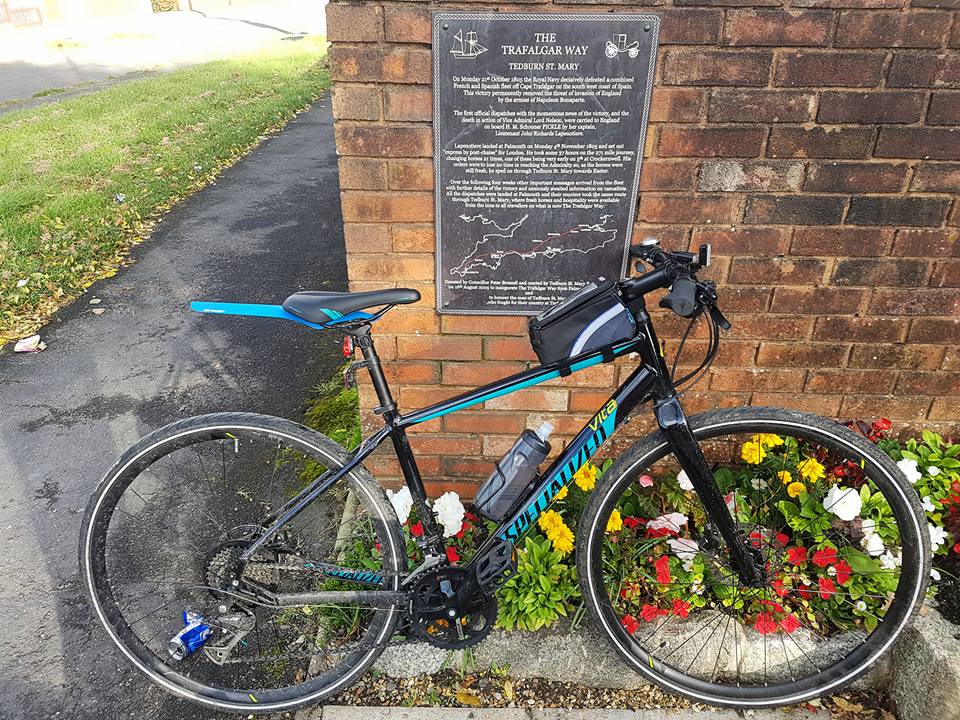 From Tedburn St. Mary you head out to Nadderwater. There wasn’t much information on the whereabouts of this plaque online, with some websites stating that it had been relocated due to vandalism.​Anyway, there is a plaque right opposite the pub, next to a letterbox! 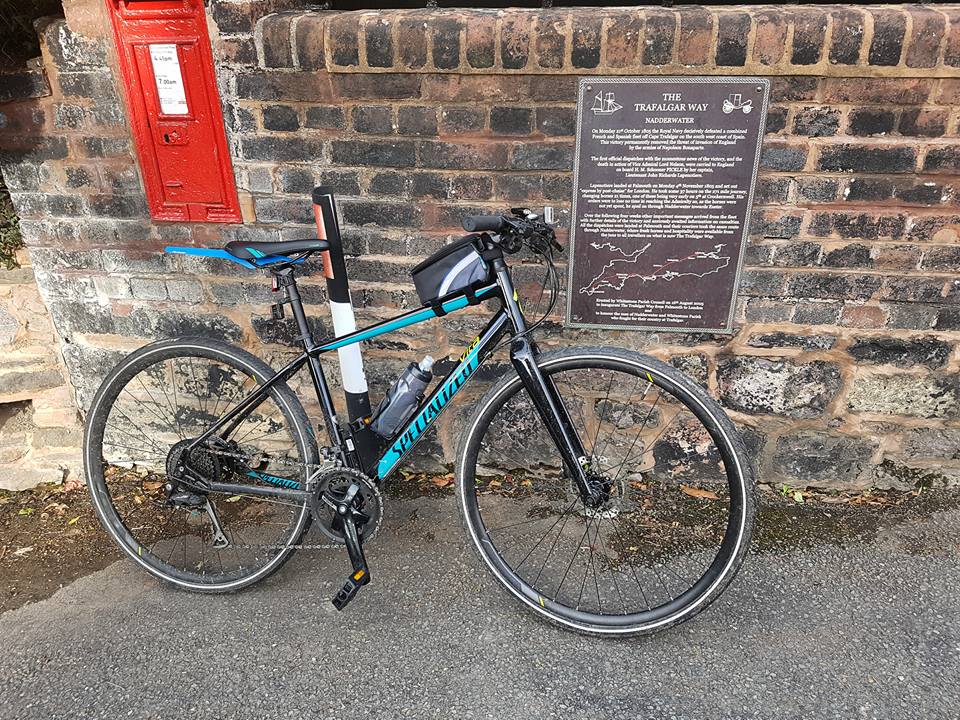 From Nadderwater you head down Redhills and Okehampton Road, across the Exe Bridge and up Fore Street in to the city centre.Every single piece of information online states that the plaque is on the Guildhall in town. It’s not! It’s actually in a flowerbed by the council offices.

Heading out of the city, you turn off in to Clyst Honiton, which as it turns out is also known as Honiton’s Clyst. Just to confuse matters… There was finally another Trafalgar Way sign here too.Also, in case like me, you were wondering… Clyst means clear stream.

My stepdad joined me for the ride today, and as my legs were feeling like lead from Saturday’s ride, the company was very welcome! 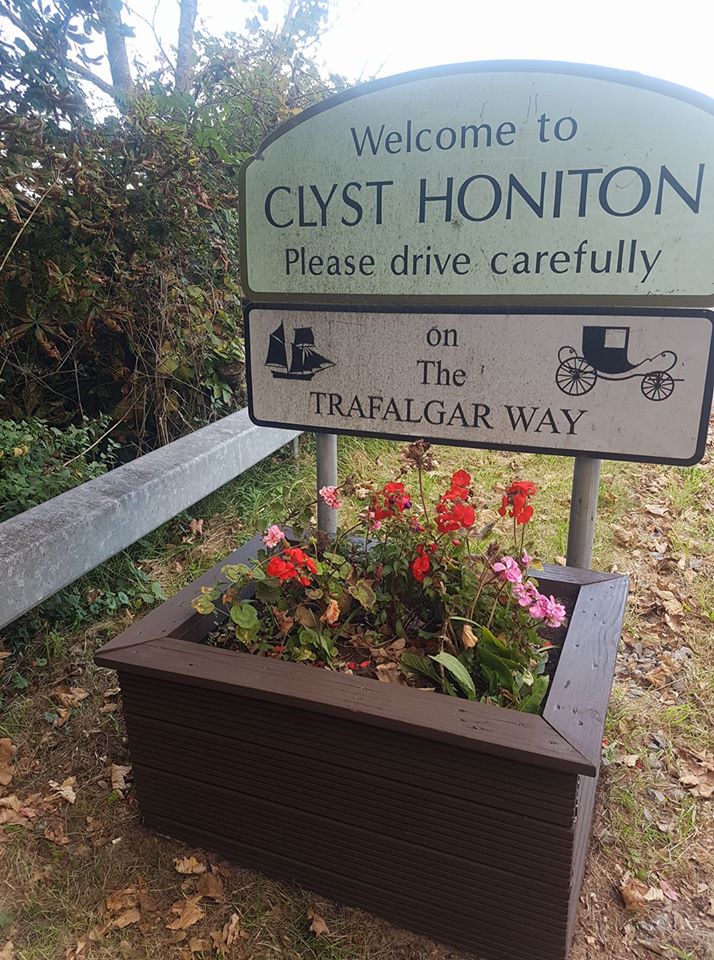 As you come in on the main road, turn right near the pub and there’s a bus shelter and information board. The plaque is right next to this. 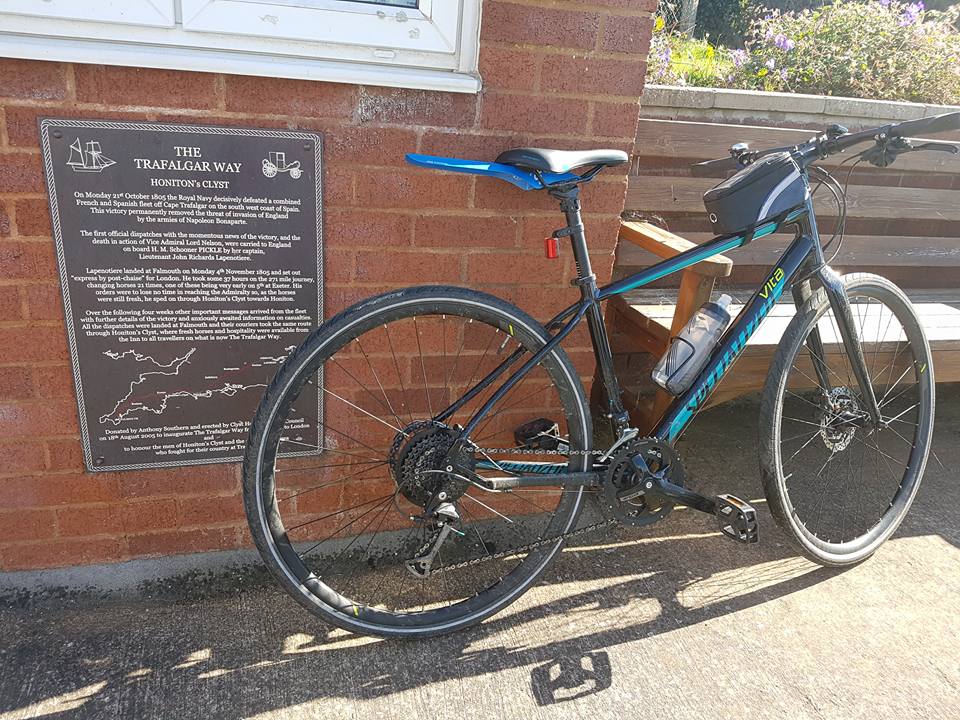 From Clyst Honiton, head back out on to the main road and turn right, past the huge Lidl distribution centre and Skypark. You’ll pass through a number of villages, Cranbrook, Rockbeare and head out in the direction of Wimple and Fenny Bridges before climbing in to Honiton.The plaque is in the town centre next to the church, on the side of what is currently Costa Coffee. 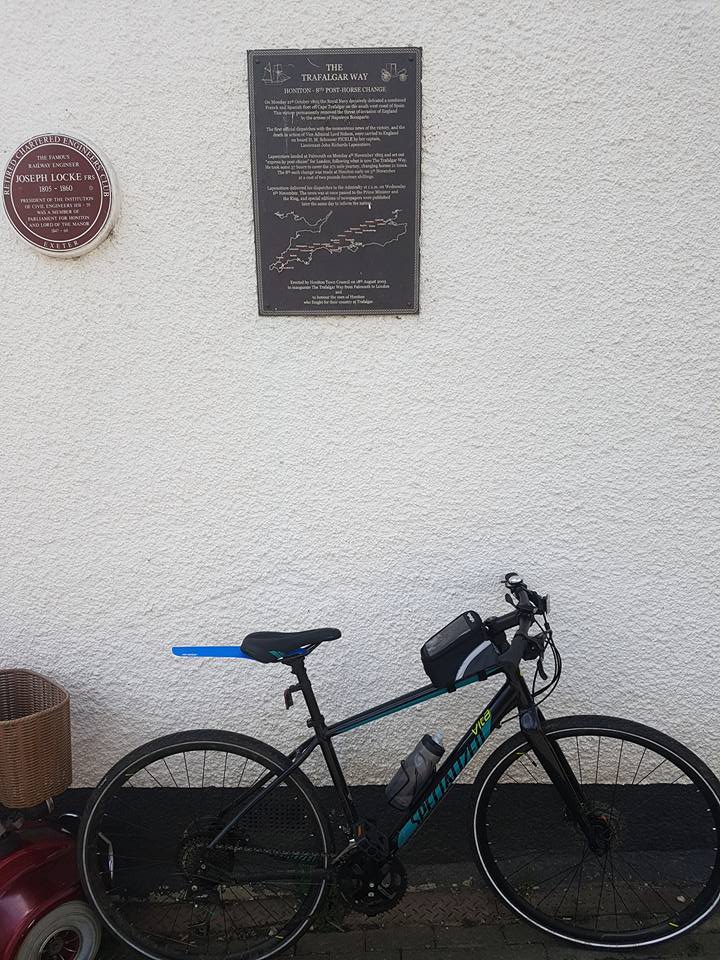 From Honiton, we decided to avoid this very busy stretch of the A35 and diverted off out of Honiton towards Cotleigh before dropping down the valley to the railway line and climbing up again to rejoin the A35.This then heads straight down in to The White Hart Inn in Wilmington before heading on to Kilmington (another Trafalgar Way point but there is no plaque). 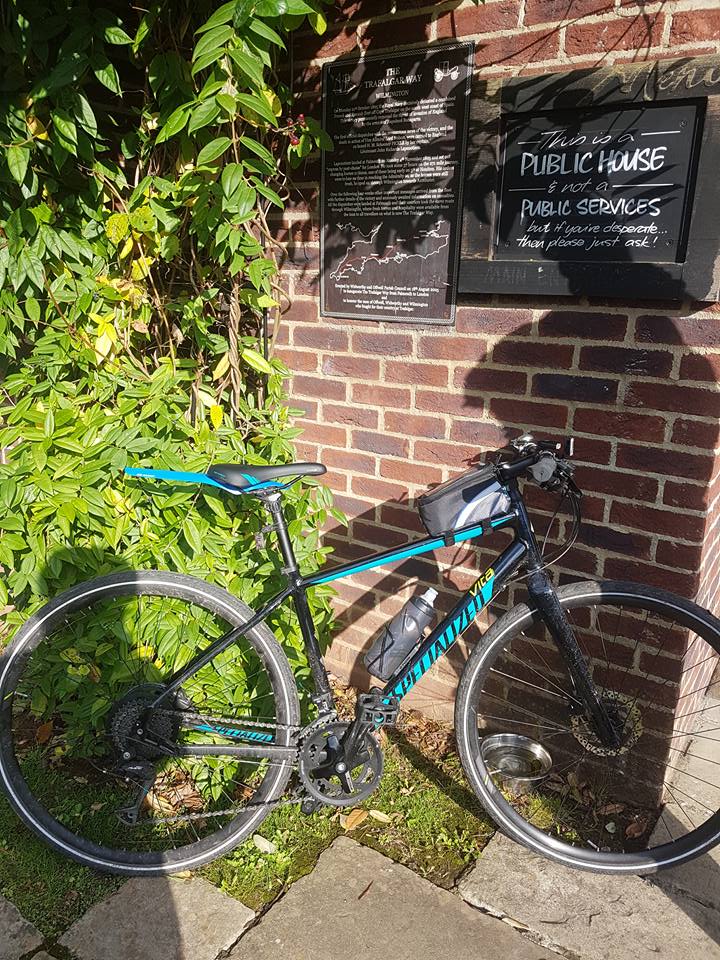 After Wilmington, we again came off the A35 to avoid a busy stretch, which actually ended up being a poor life decision as we ended up climbing a long steep hill before we could drop back down to the A35 again. Rookie error and my legs were screaming at this point!​We followed the A35 down until we reached the cycle path in to Axminster, over the River Axe. The cycle path was conveniently filled with signs denoting the fact it’s The Trafalgar Way! 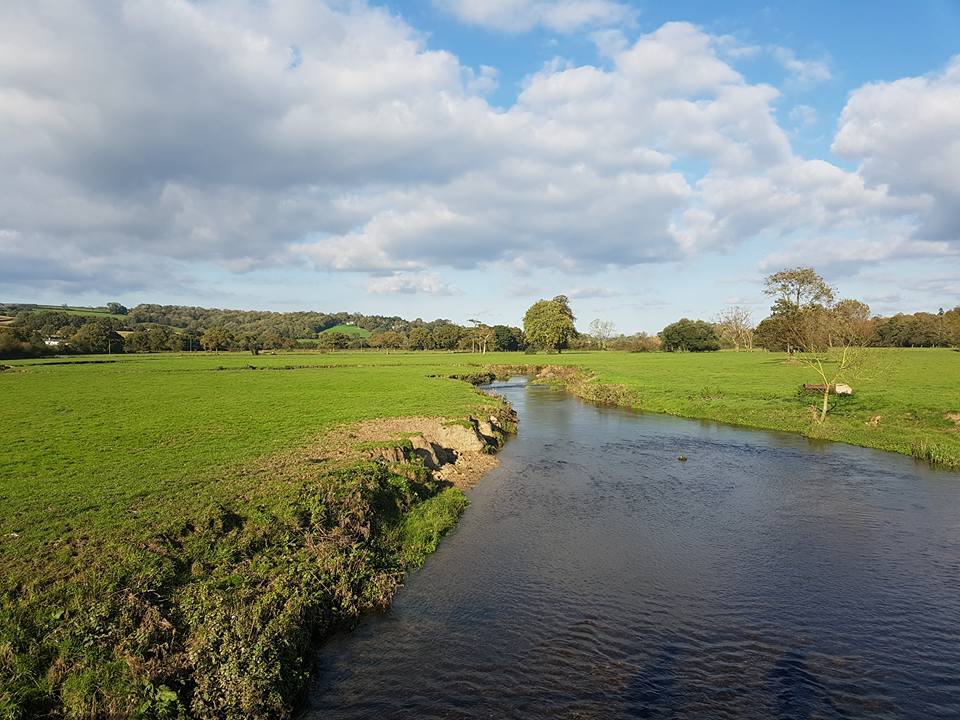 The plaque is in the town centre on the very right hand end of Trinity House if you’re looking at it from the church, next to what is currently a hardware shop.

And so next weekend I’ll be catching the train to Axminster and heading off to Bridport and Dorchester, before aiming (knee/weather/work as I’m on duty) dependent to head on to Salisbury on Sunday.
If you want to cycle The Trafalgar Way click here for this weekend’s route on OS Maps.
You can even download it as a GPX file.
I’m still fundraising for this ride, and it’s all to raise money to help young people get involved with The Duke of Edinburgh’s Award. it is a charity and it really does help so many!