This weekend I finished The Trafalgar Way.

It’s been emotional, I still dislike cycling up long slow hills, but my cycling fitness has improved hugely in a short period of time.

On Friday I had the day off and managed to get the miles and plaques in from Andover to Kew Bridge, leaving myself just the 6 in to Trafalgar Square on Sunday morning, getting me there on time for the national Sea Cadet Trafalgar Day parade.

​And so without further ado…

Cycling in to Andover on the A343 from Nether Wallop, you head in to the main town centre (there are some nice cycle routes) and it’s on the side of the Guildhall. I’d never been in to Andover before, and took the opportunity to stop for coffee and a croissant with a friend from school/college, Amy and her little boy Alfie – they have a blog (here). 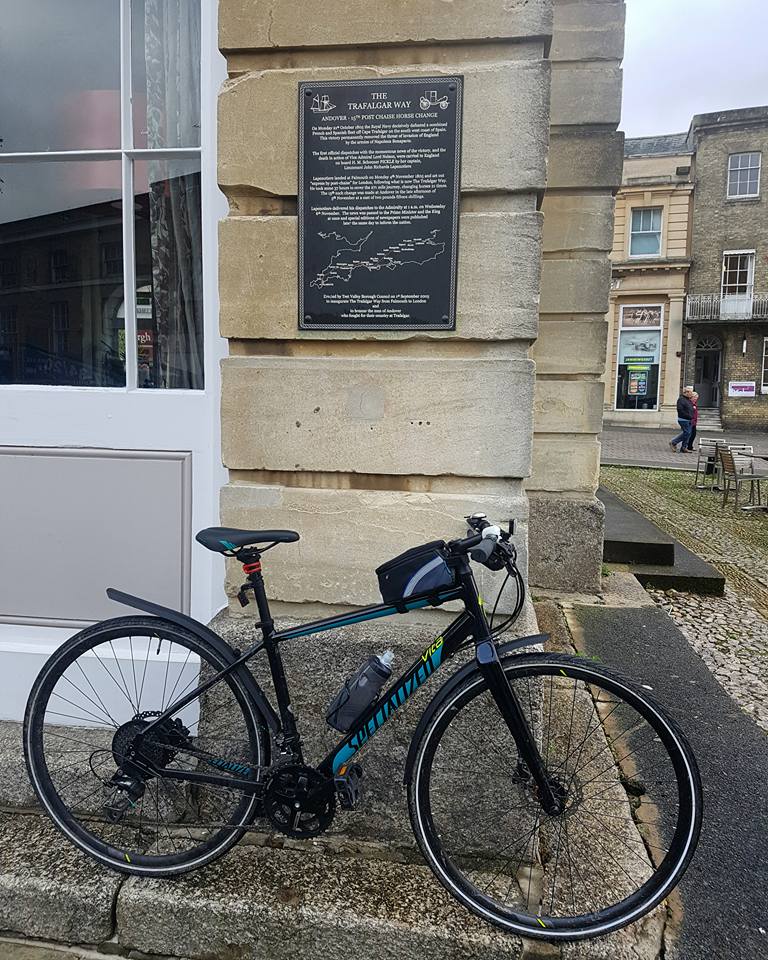 From Andover, I headed out along the B3400, through Hurstbourne Priors, Whitchurch and Laverstoke and cycle past the Bombay Sapphire Gin Distillery. Tempting as it was to pull in, I managed to exercise restraint. Predominantly because it was about 10 in the morning!

The plaque in Overton is on the side of the village library.

Continuing along this long straight road, you head in to Basingstoke.

This was infuriating. I have been told by so many people that Basingstoke Council bought a plaque to commemorate the Trafalgar 200 celebrations and The Trafalgar Way. The plaque? Nowhere to be seen. The council offices were super unhelpful and gave vacant silences on the phone. I cycled up and down the old coach road and nothing!

After 20 minutes I decided I had to give up and head on.

If you live in Basingstoke and have seen this, then please let me know, because it’s annoying me! 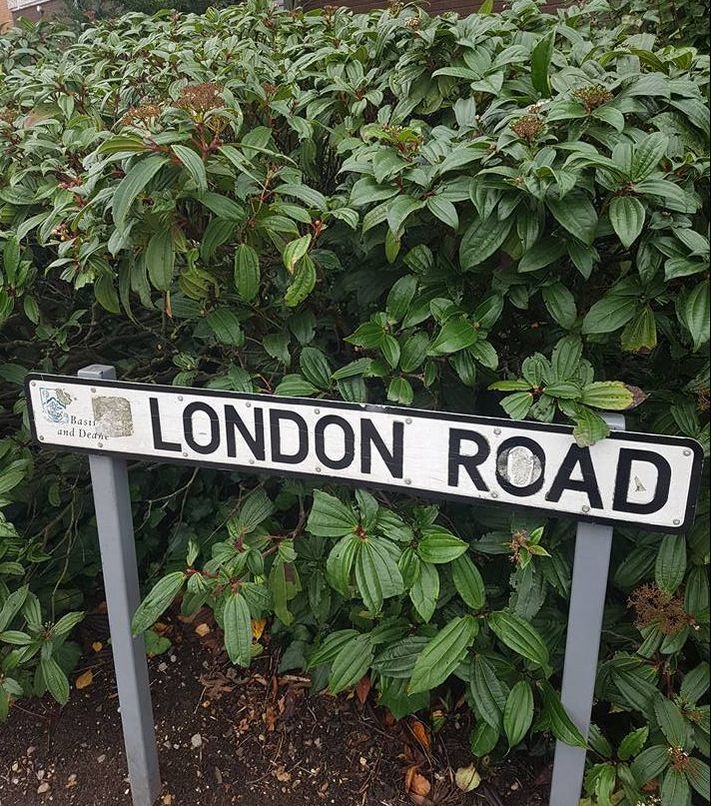 The official route follows the A30 out of Basingstoke, but as it was stop start traffic (and I’m unsure why) I diverted off through Old Basing and Newnham, joining it again in Hook. You cycle through the very pretty village of Hartley Wintney and in to Hartford Bridge, where the White Lion pub is now an antique dealers. 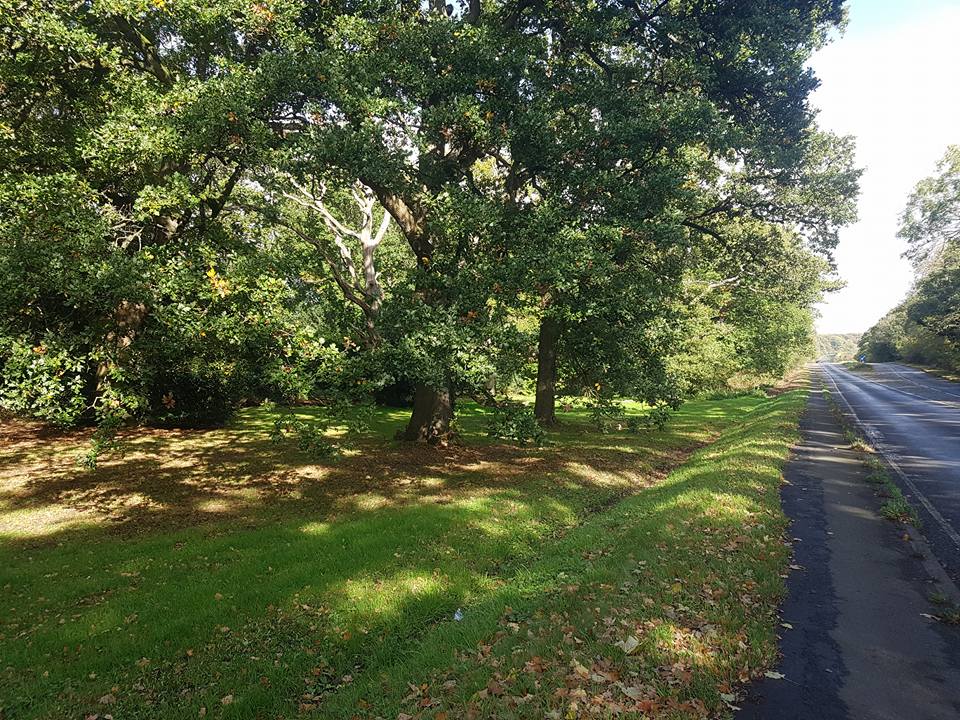 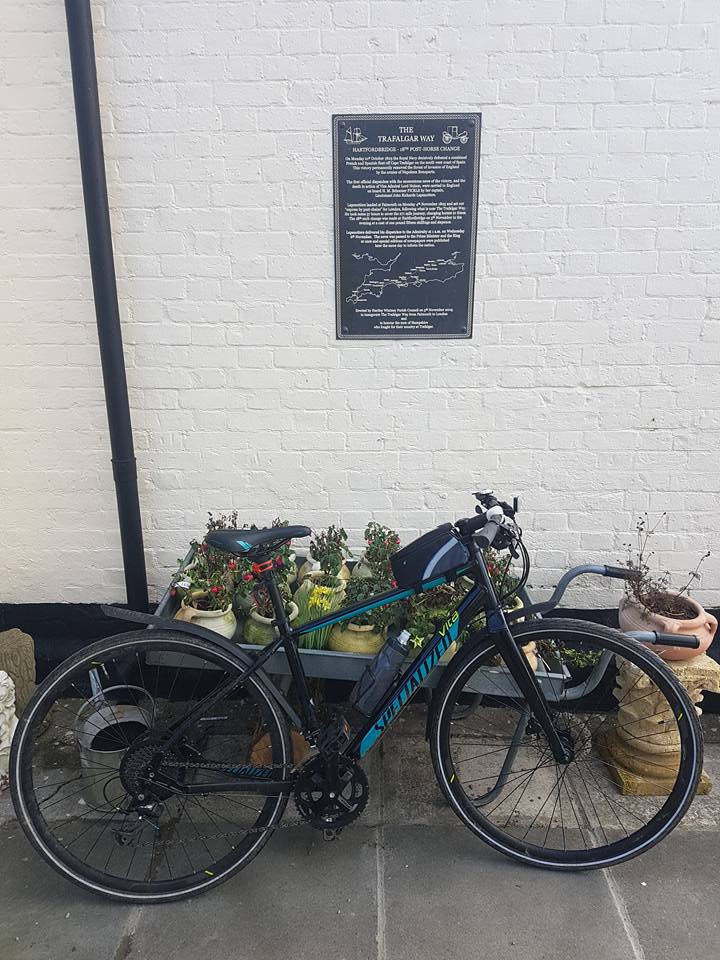 From Hartfordbridge I continued to follow the A30 across Hartford Bridge Flats and Yately Wood, before heading in to Camberley. This is where it started to get busier on the roads, but thankfully there were a lot of pavements which were dual use cycle paths. I headed through the town, past the Royal Military Academy, Sandhurst and on to Bagshot, my next stop. 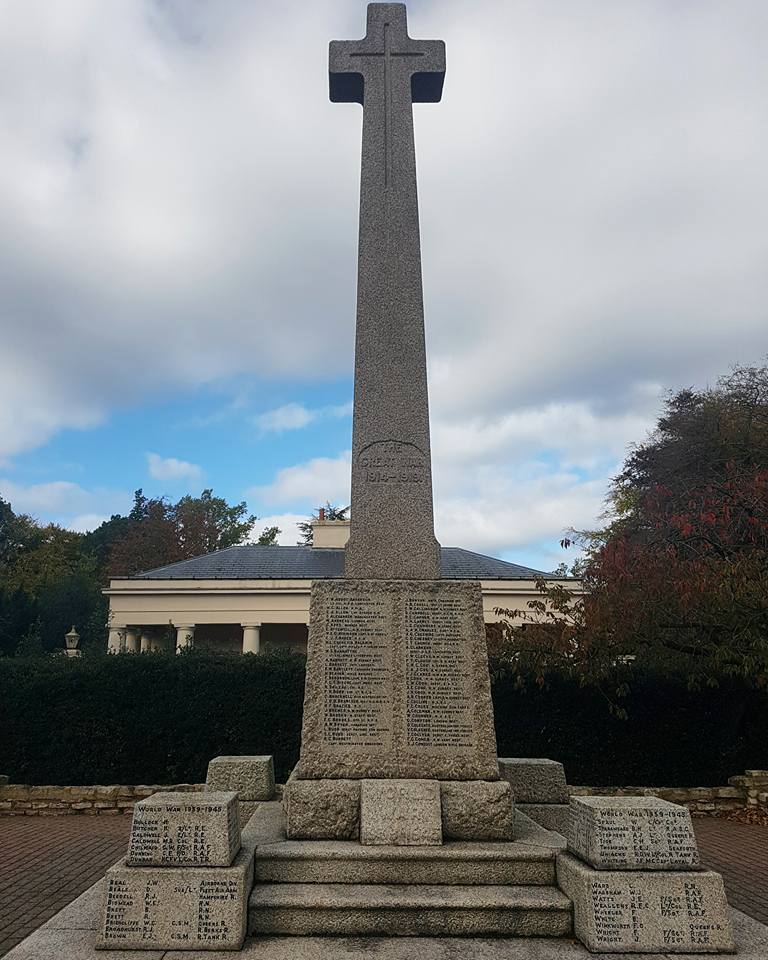 As you drop down in to Bagshot, veer off to the right in to the town centre. On the Jubilee Lamp in the square (easily spotted) there is a plaque marking the route. It’s another of the ones in a poor condition, unfortunately, but it is there! 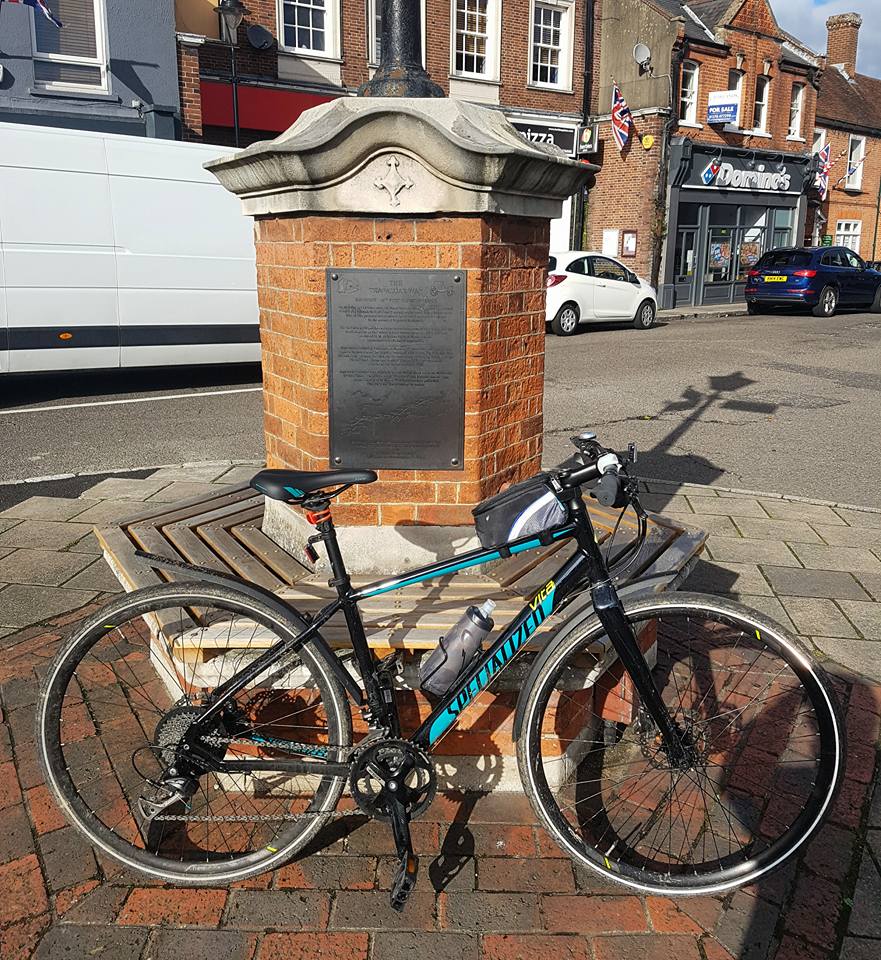 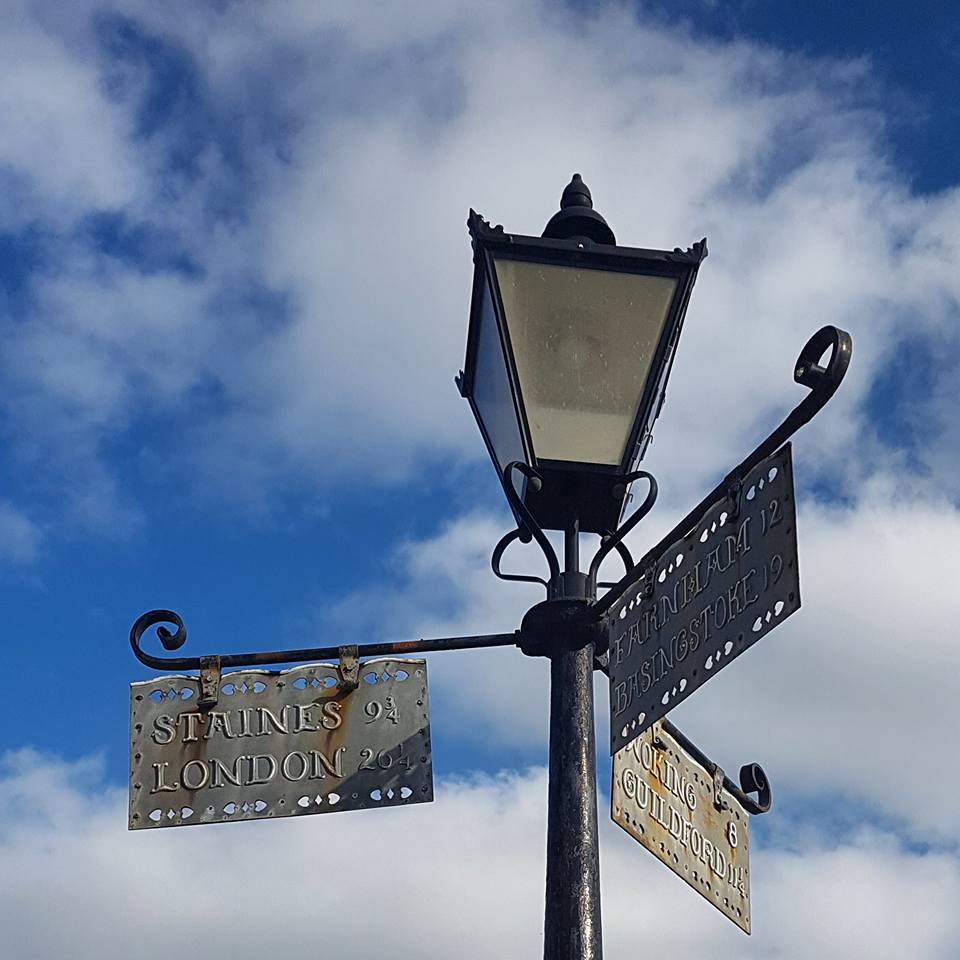 Egham
The route from here is very easy to follow as it’s simply the A30, all the way to Egham, through Sunningdale, Englefield Green and towards the town centre. The plaque is on the side of the Loch Fyne restaurant. 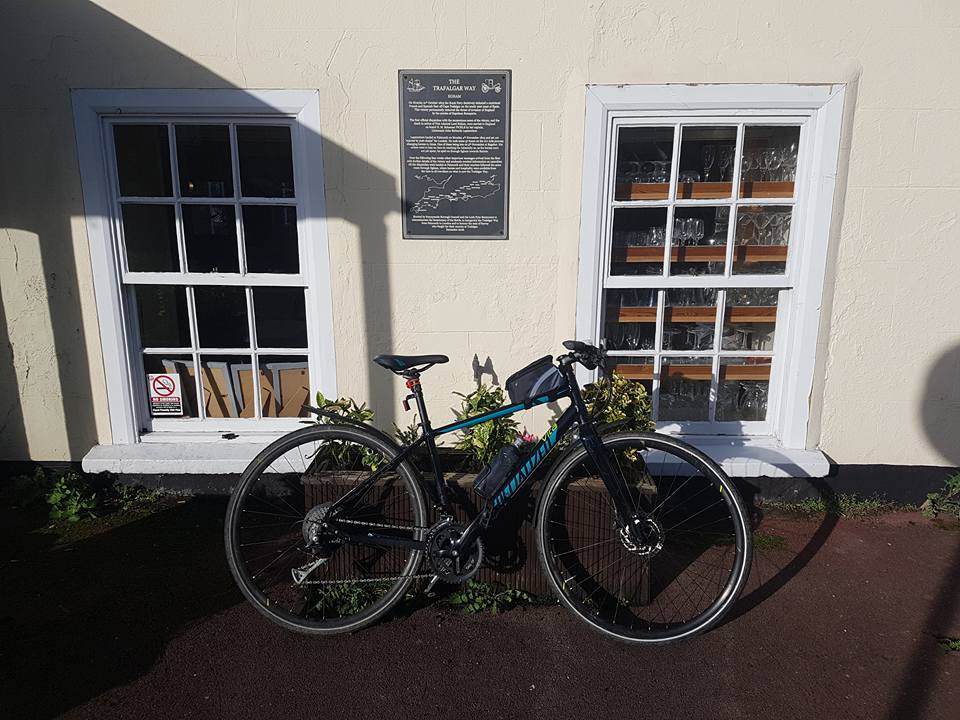 Out of Egham you come to a large roundabout with the M25 running over it, follow the cycle paths underneath it and head in to Staines Town Centre.

The plaque, on the side of the town hall in the main square, took some hunting (purely because I assumed it to be at eye level) and it’s actually between two higher windows. 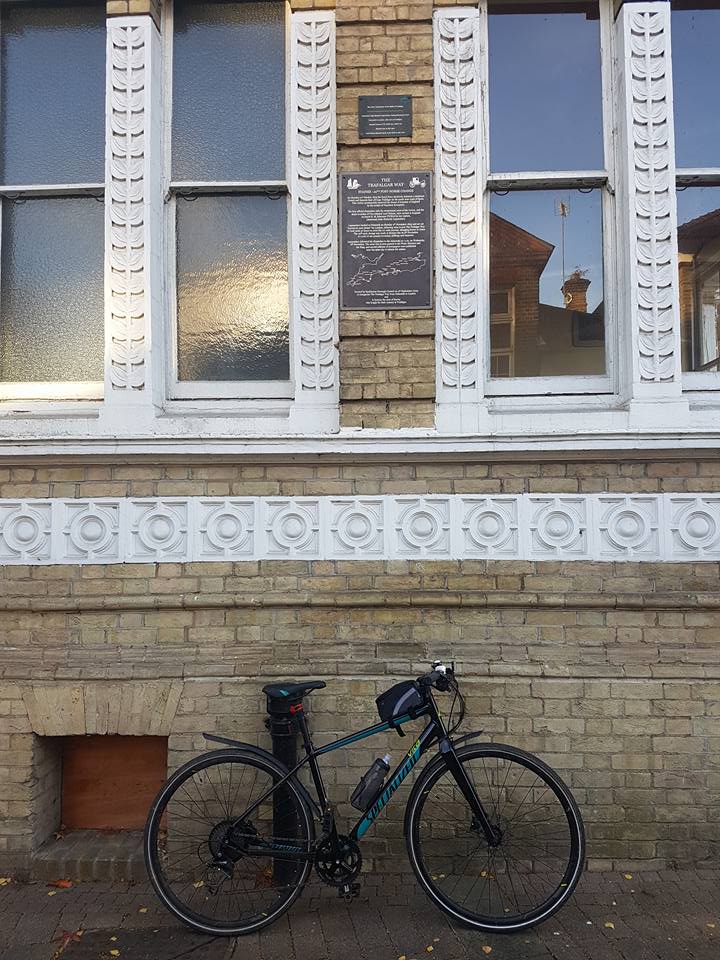 This leg between Staines and Kew was not the prettiest. You cycle along paths to the side of the A30, past Heathrow Airport and a lot of Hounslow trading estates. But, and here’s the bonus, it’s totally flat and nice smooth tarmac so you can get some good speed up. I stopped a couple of times, once because a plane literally went over my head and I wanted to get a photo, and once for a photo of this sign (well, I had to…) 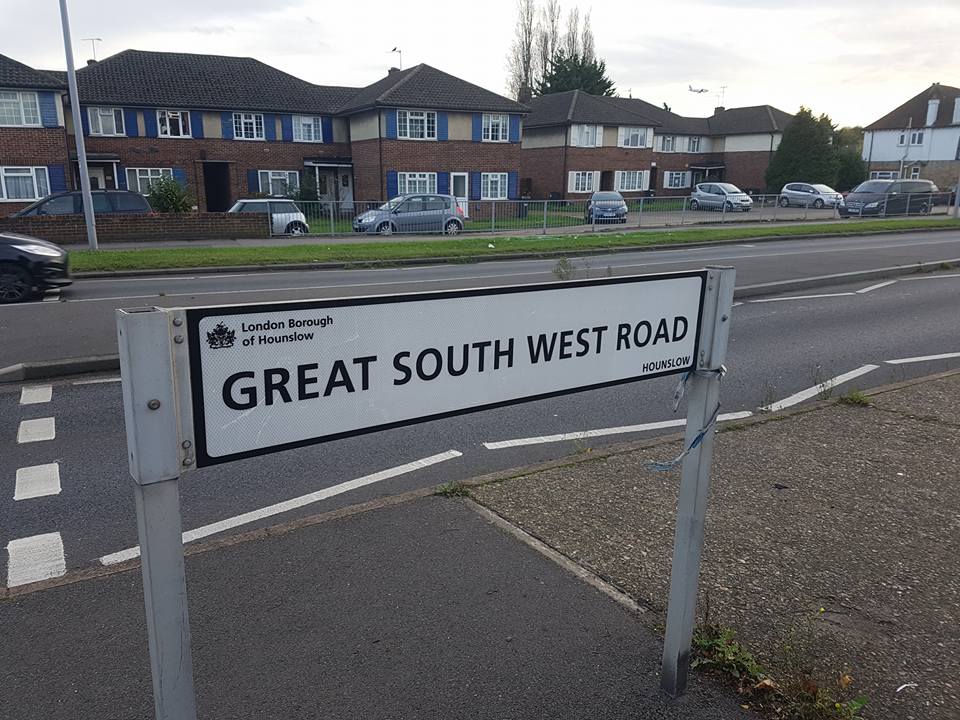 It was here that I left the A30 and joined the cycle routes along the side of the A4, through Hatton, Osterley and as far as the roundabout for the A3002 in to Brentford, which I followed on to the High St and Kew Bridge Road. 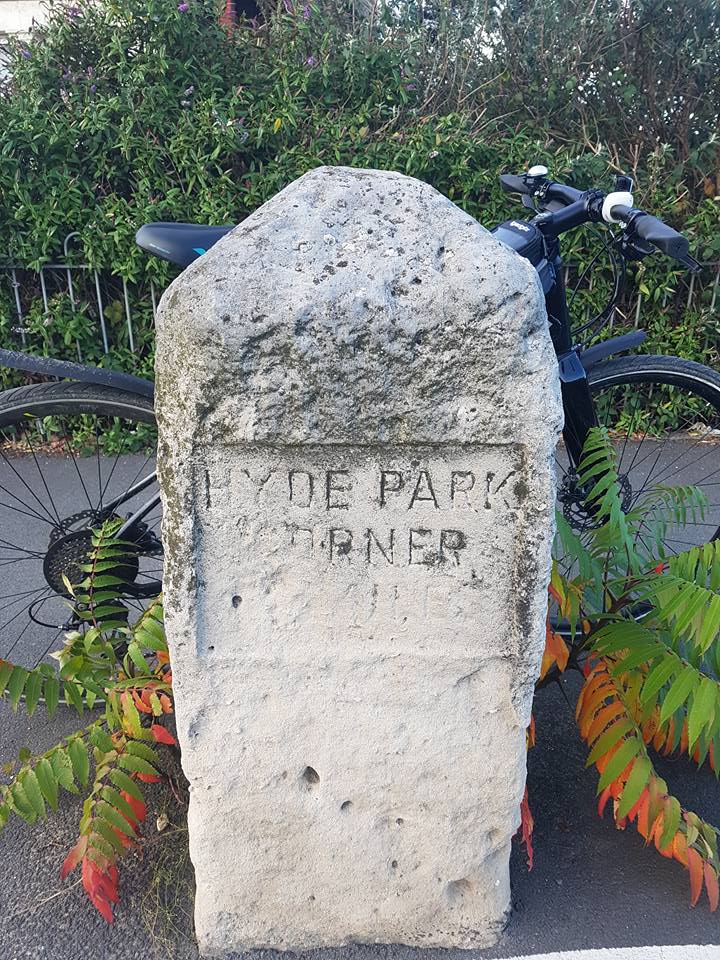 The plaque is in the beer garden of The Express Tavern, next to Kew Bridge train station. 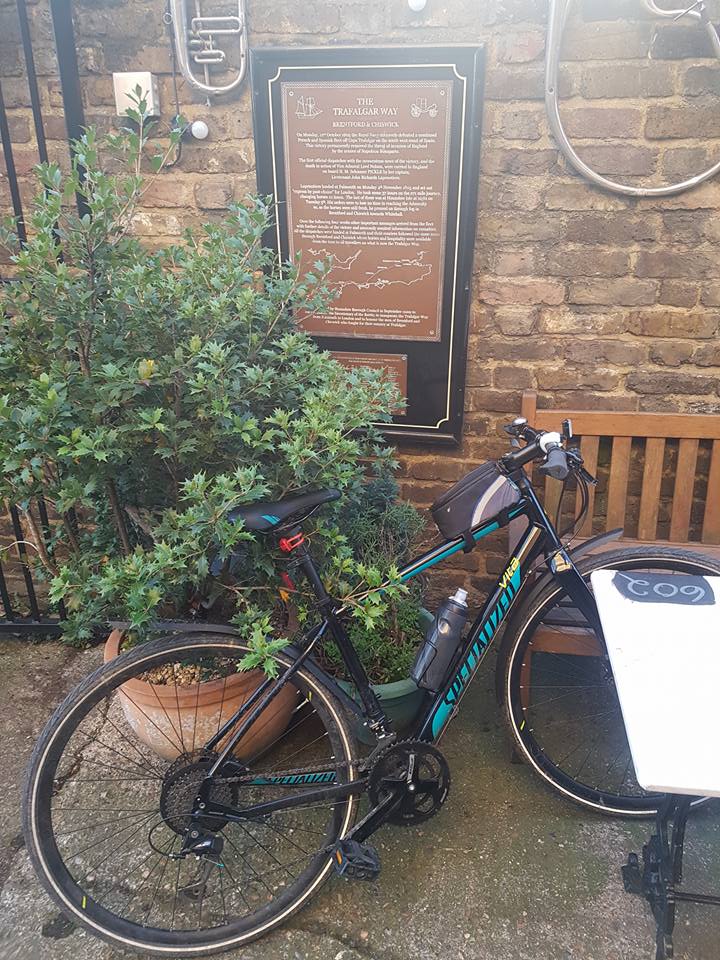 There was an additional plaque with this one, naming some of the sailors from the area who fought at the Battle of Trafalgar, which was a nice touch. 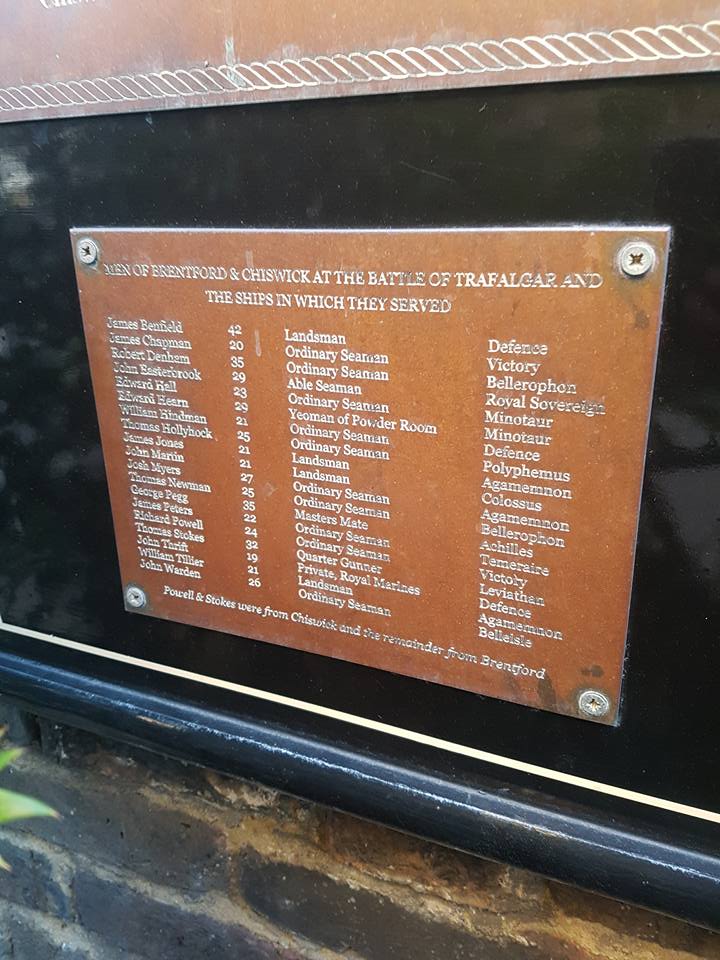 I called it a day here and came back to London on Sunday morning, ready for the next stage!

From Kew, you follow the A315 through Chiswick and in to Hammersmith officially. However, we drove up to complete this final leg and parked at RIchmond before cycling along the river and crossing over in to Hammersmith to the next stop, The Salutation Inn.

Obviously, at 9 in the morning on a Sunday the pub was closed, and annoyingly it was the only plaque so far that’s indoors. I will go back and get the photo one day! 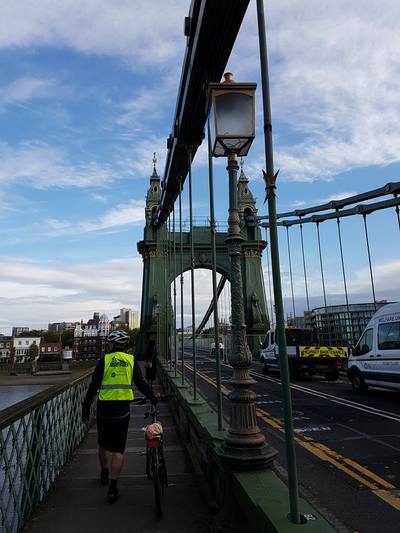 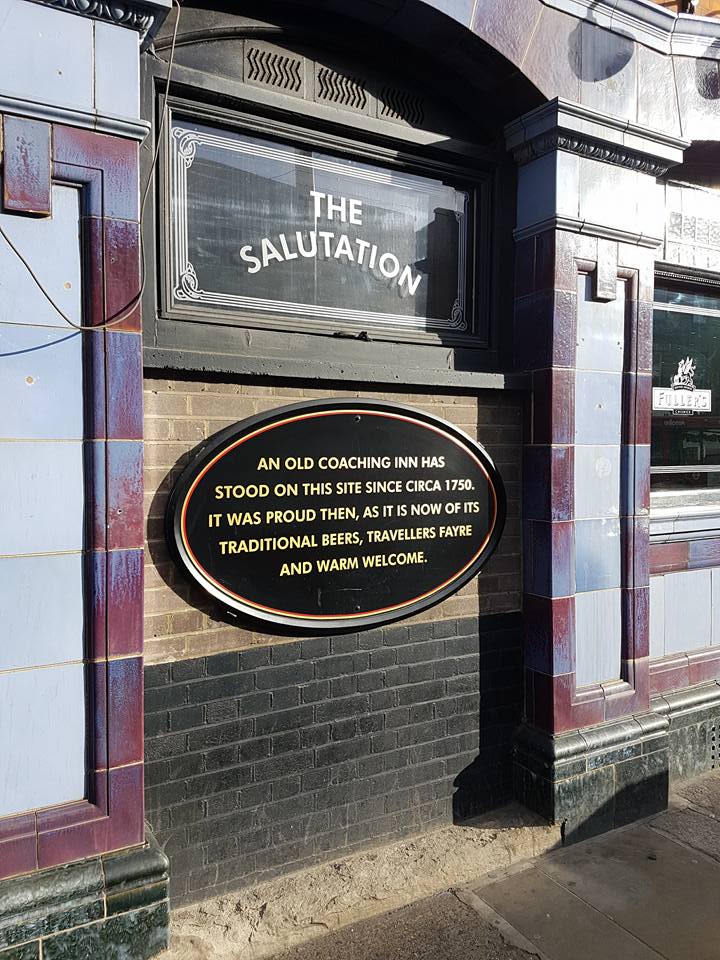 From here, we cycled along the A315 and continued along Hammersmith Road until it became Kensington High Street.

The plaque is on the main entrance to Holland Park. 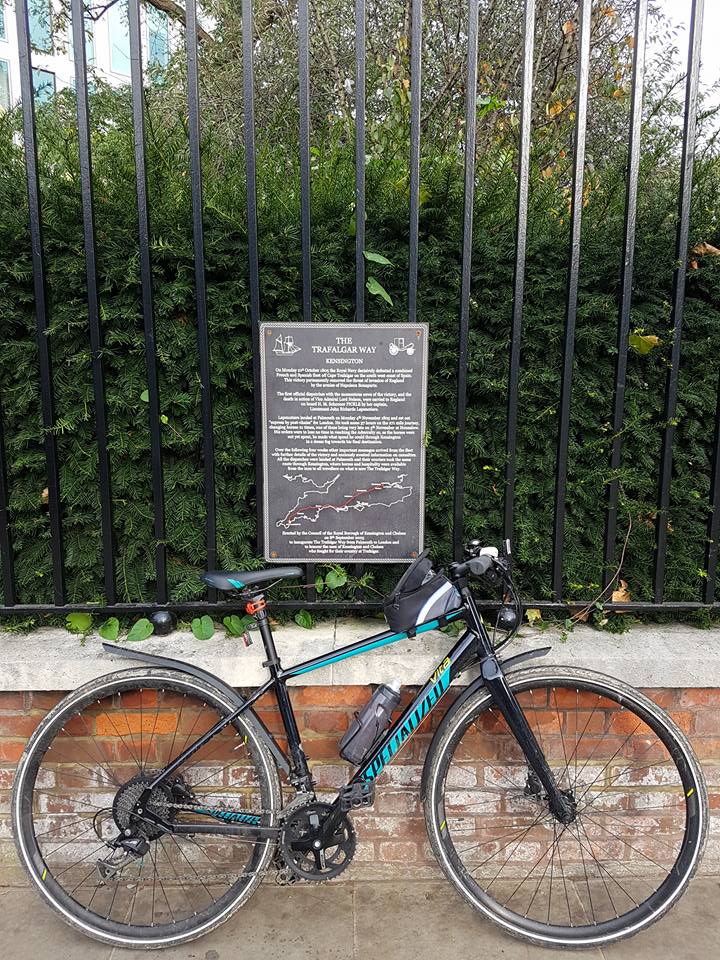 From here, we joined the South Carriage Drive and cycled past the Albert Memorial, through the park, and came out at Hyde Park Corner. We then cycled over the roundabout to the Wellington Memorial , past Buckingham Palace and down the Mall, through Admiralty Arch.

After Admiralty Arch, on the railings of Canada House. where Cockspur Street and Trafalgar Square join is the final plaque before The Admiralty! 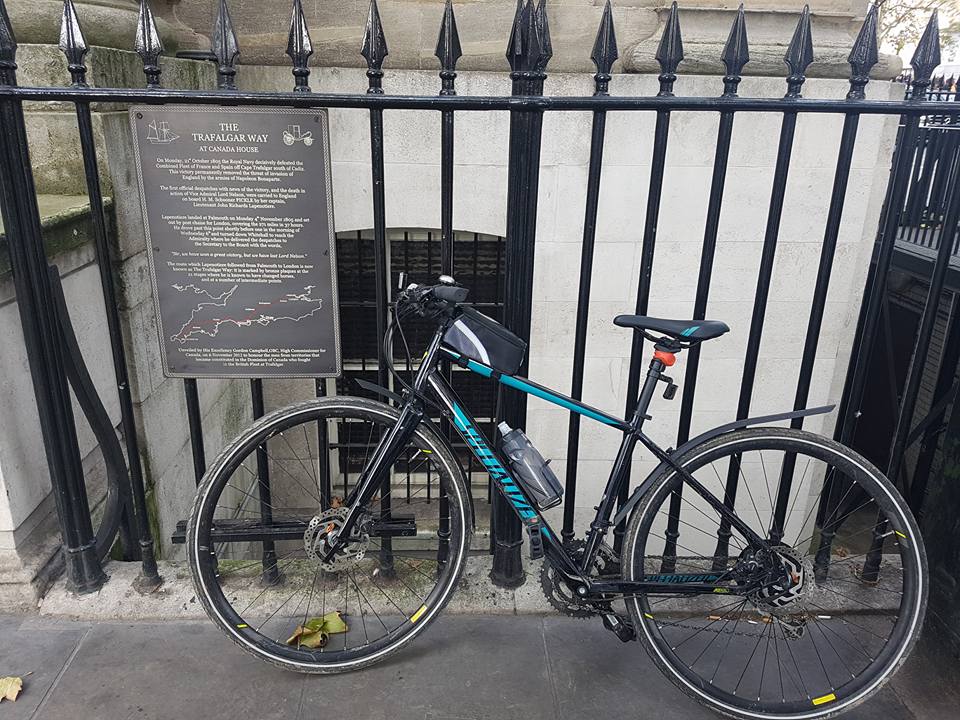 Head out of Trafalgar Square and down Whitehall, and on the side of the old Admiralty Buildings is the final plaque! I’d made it! 296 miles and 36.5 hours of cycling later, I was here. 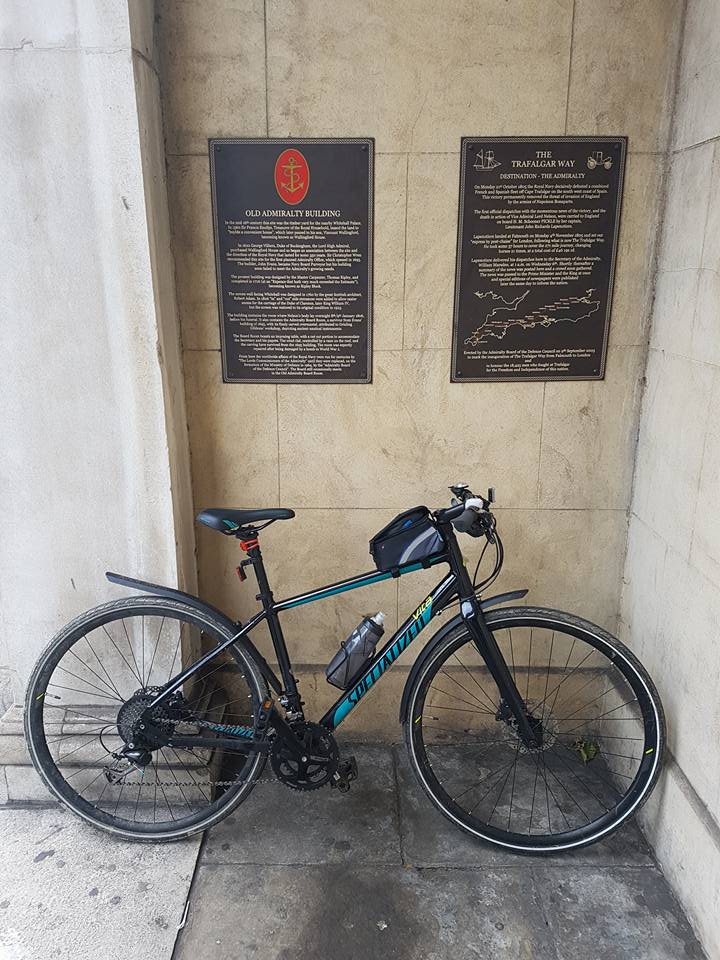 Complete with one of HMS Victory’s white ensigns. 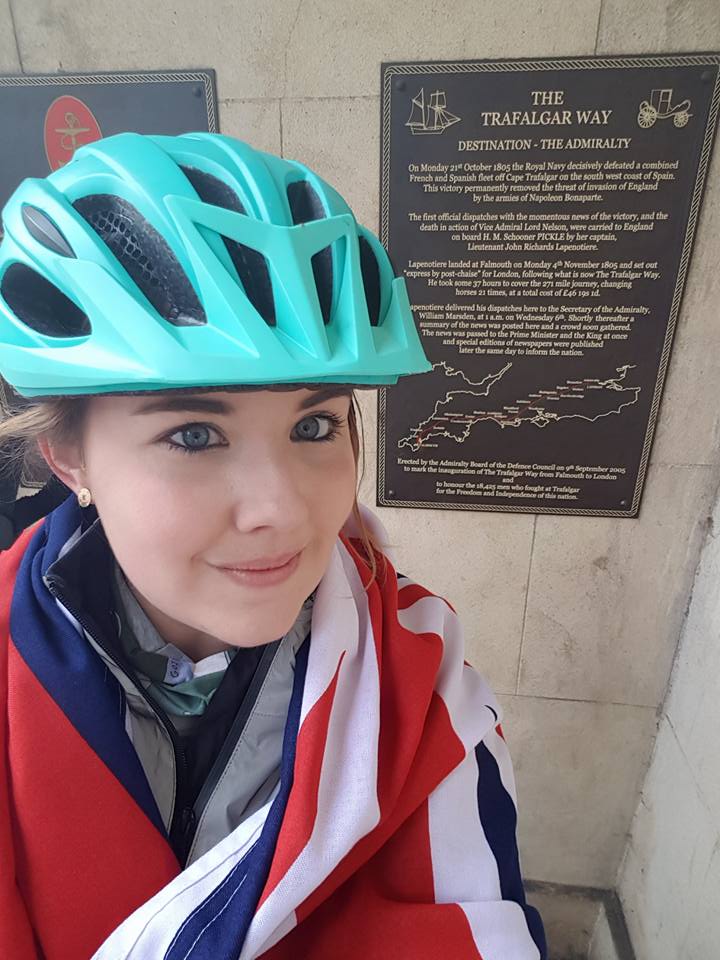 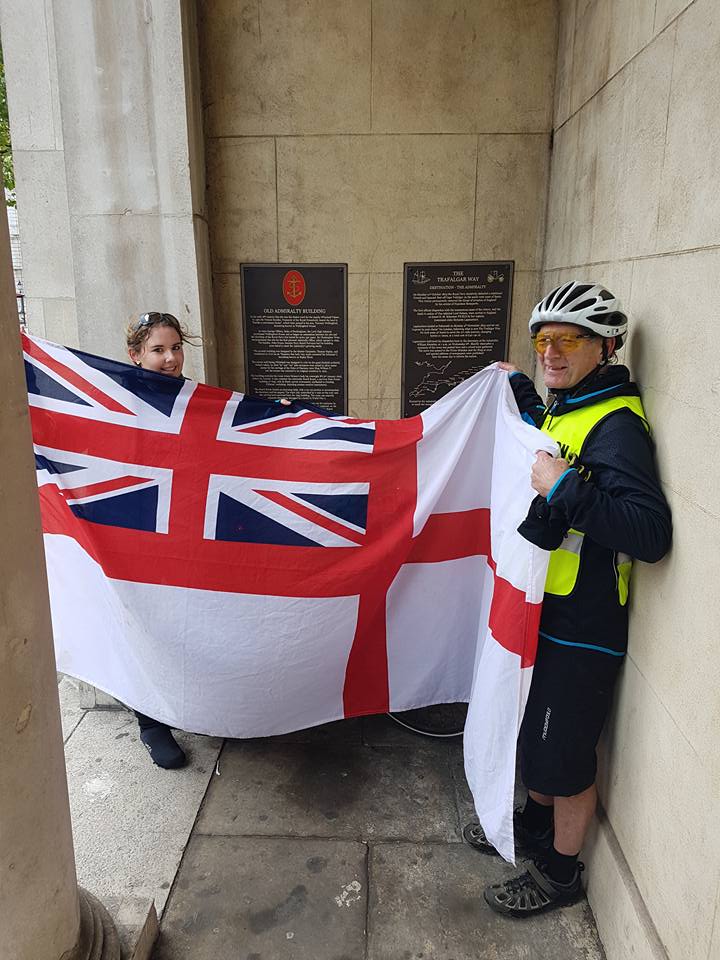 Of course, the reason I chose to finish yesterday was because of the national Sea Cadet Trafalgar Day parade. Something I proudly took part in every year as part of the SCC Massed Band as a cadet. I teach Sea Cadets and so it was also a huge privilege. A few people I knew were there or came to meet me as I finished my ride, which was lovely and the obligatory Nelson photo had to be taken… 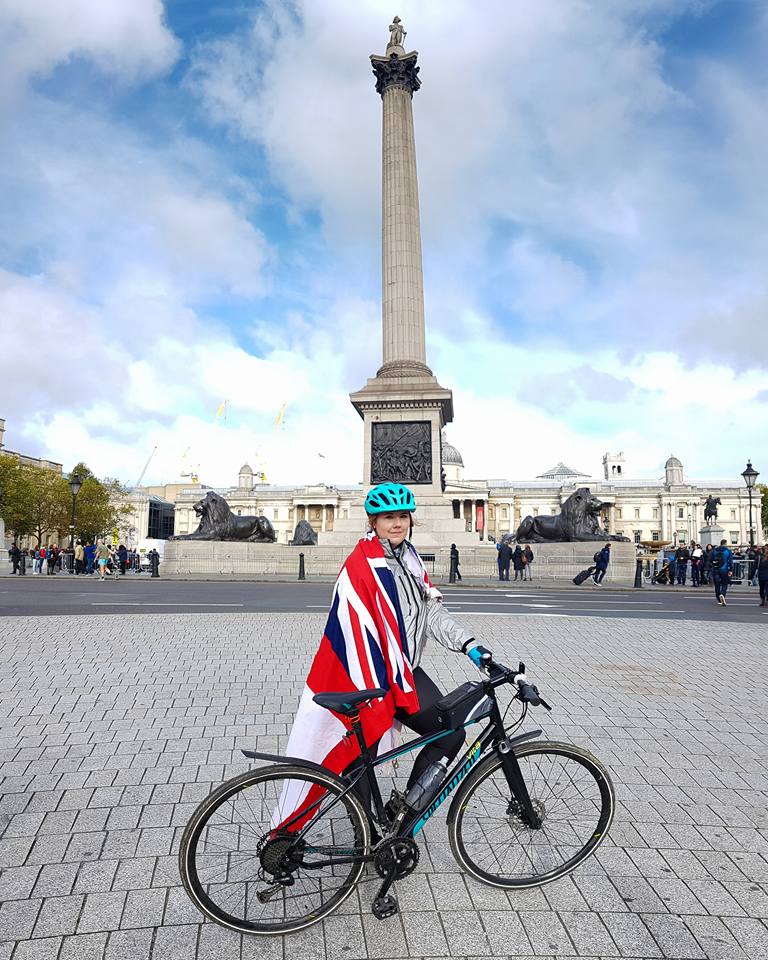 I’ve gone from being the person who whinged at cycling 8 miles on the Isle of Wight to the person who has cycled from Falmouth to London. Ok, not in one long stint, but one day maybe…

I definitely have a new hobby, I’ve raised well over £500 for The Duke of Edinburgh’s Award and hopefully helped more young people have the opportunity to take part in this wonderful scheme. 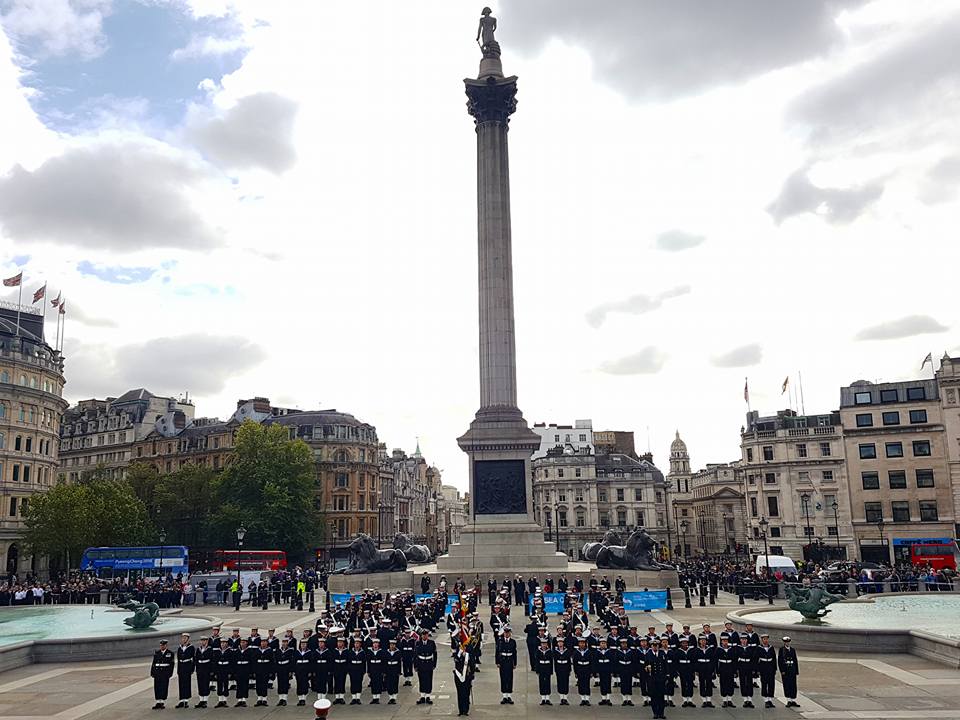 Thank you to everyone who sponsored me, to my mum for playing support car/bringing water and food so I didn’t need a bag, to my stepdad and Craig from Twitter for joining me cycling legs of this ride (especially the hillier ones where I was sulking) and to everyone who has commented on this journey.

To those of you who have said you want to ride it, I’ll have another post going live soon with the full .gpx file on OS Maps!

If you want to cycle The Trafalgar Way click here for this weekend’s route on OS Maps.
You can even download it as a GPX file. ​​

​Alternatively, if you want to cycle part of it/the whole thing as a sportive event, there’s an official event annually – Find more out here!

I didn’t do that, because I wanted to stop at some naval spots en route and take in all the plaques, but if you’re a speed demon, then it’s worth checking them out 🙂