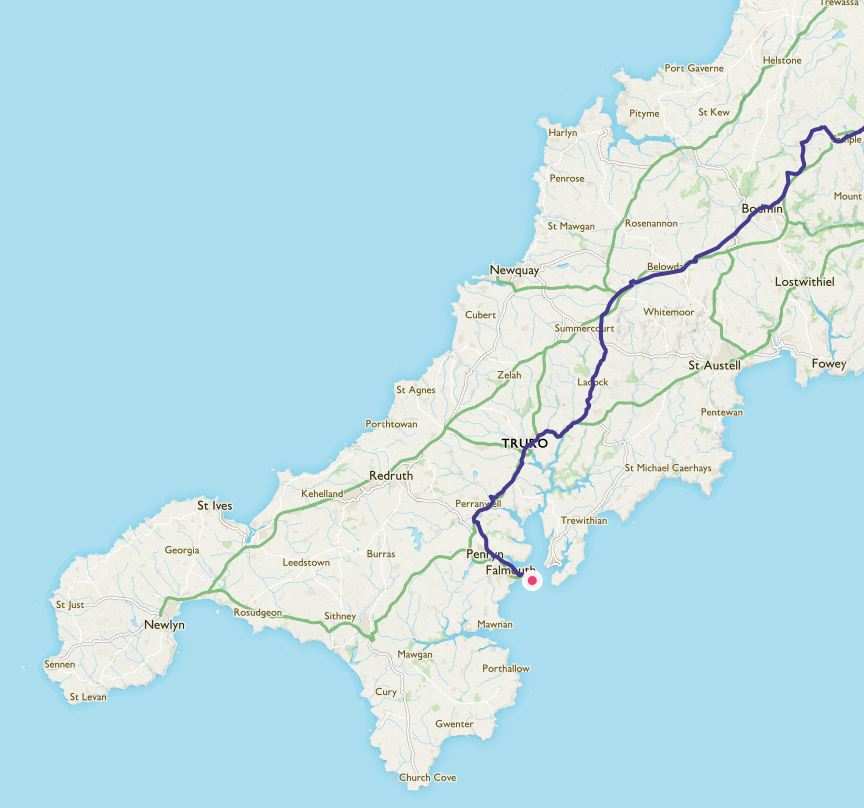 As you will have seen, I am currently in the midst of my Trafalgar Way bike ride.Unfortunately, due to work commitments I am having to do this in stages, because I can’t take time off during the week.

And so, this weekend I headed for Cornwall and started the 271 mile journey from Pendennis Point in Falmouth to The Admiralty in London to raise money for The Duke of Edinburgh’s Award.

Rain.
Gales.
Bad weather.All forecasted, but I needed to start this weekend.I love cycling in the rain, but this was something else. There’s no such thing as bad weather anyway… just inappropriate clothing. Or something like that 🙂We tried to get a photo of HMS Victory’s white ensign at Pendennis Point when we arrived at around 1645 and my trusty ensign holders (mum and stepdad) almost took off!Lieutenant Lapenotière of HMS Pickle reached Pendennis Point on 4th November 1805 with dispatches mentioning victory at the Battle of Trafalgar and the death of Horatio Nelson. 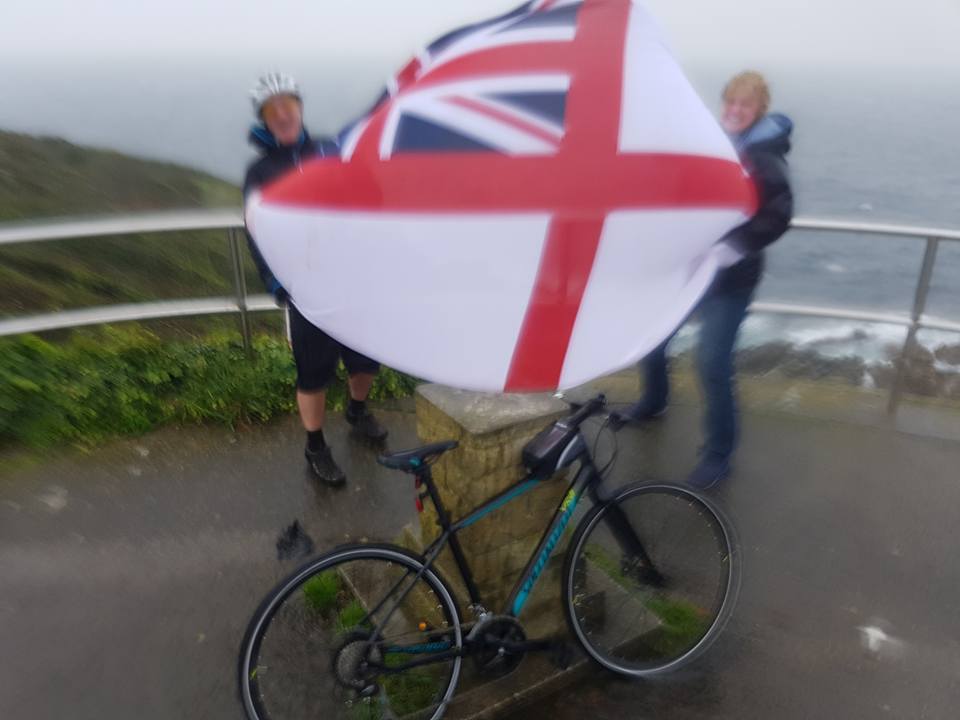 This was as good as the photography got in pouring rain with wind gusting in off the sea!

From Pendennis Point, we headed in to Falmouth, through the winding town streets until we reached the official start point of The Trafalgar Way!The first plaque was on the side of the municipal buildings in the square. 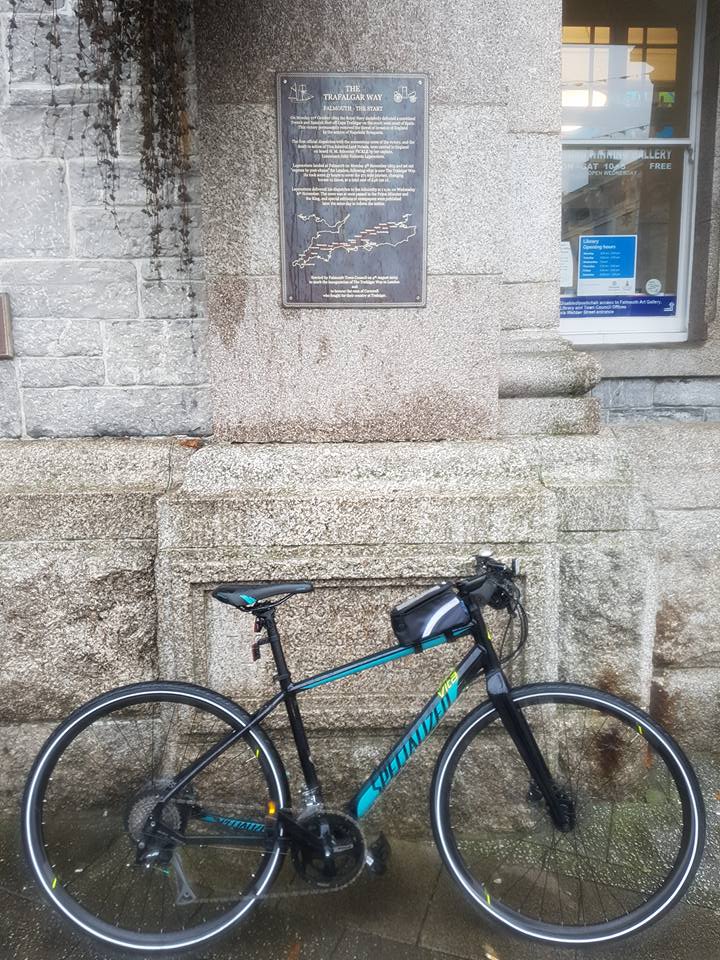 2. Penryn
We headed out of Falmouth and in to Penryn, where we found the Trafalgar Way plaque on the side of the Town hall with ease. 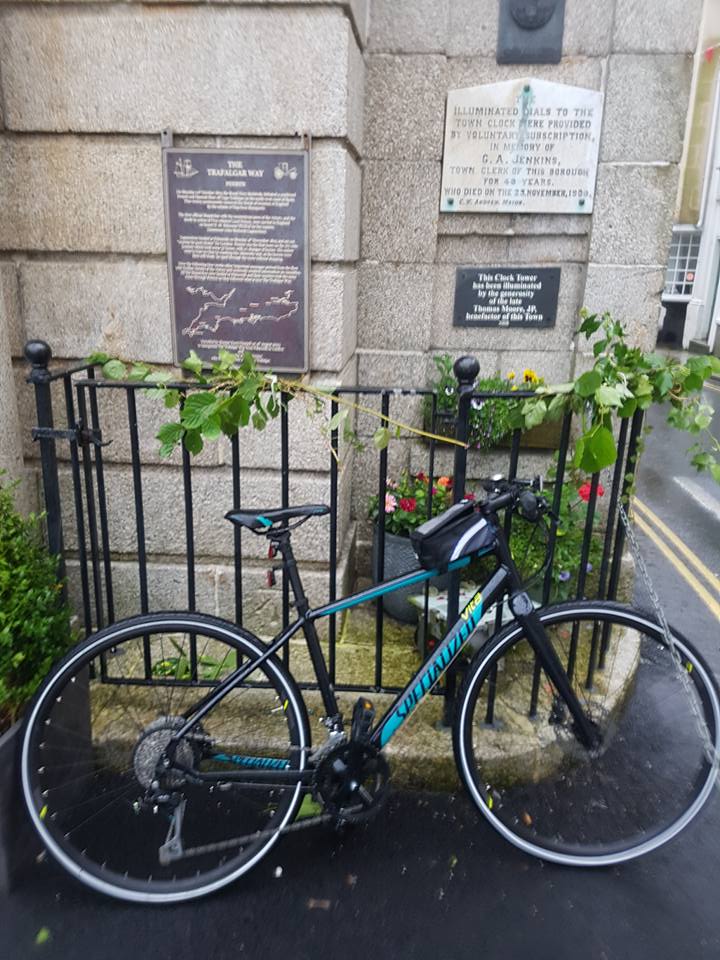 From here we walked down a side alley, back to the coach road and headed up Truro Hill out towards the A39 and Truro. We didn’t cycle the full A39 (which covers the old coach road) as, frankly, people drive like idiots, so we took the lanes that ran parallel, until we had no choice but to cycle along it.Spray, fast cars and lots of water on the roads didn’t make for enjoyable cycling conditions, but there we go!

​We cycled along the A39, then cut off to Old Carnon Hill and along the old coach road in to Truro.

This plaque took some finding… Most of the plaques are on coaching inns, but the only detail I had was ‘Lemon Street, Lemon Quay’ which as it turns out covers a large area!Eventually after some circling, we found it on the side of a solicitors office, just opposite the Hall for Cornwall. 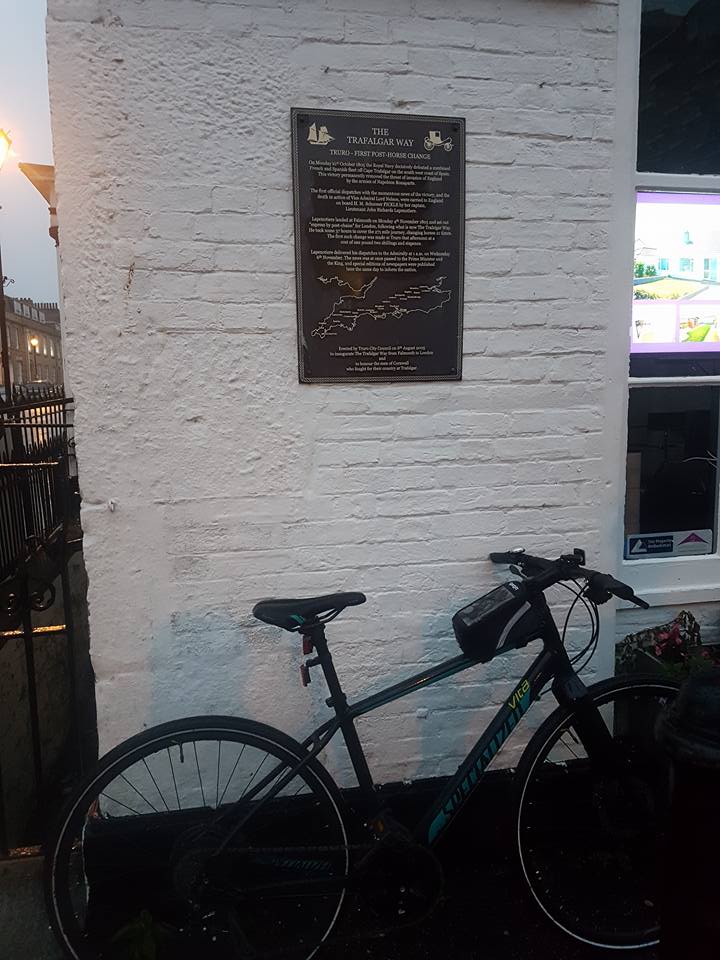 By this point it was around 1900 and starting to get dark, so we called it a day and headed for our hotel and a well earned cider (well, we were in Cornwall!)

From Truro, we took the B3275 out towards Ladock and on to Fraddon. It’s a long straight run on a continual incline!There are markers all along this section of the road from when it was used for coaching, and it was preferable to the A39, again. I’m not a fan of cycling on dual carriageways, so am trying to avoid them as much as I can on this ride, whilst maintaining the proximity to the original route as much as I can.

After a nice & healthy McDonalds breakfast (sometimes you have to) and a coffee we dropped down in to the village.

The Trafalgar Way plaque in Fraddon is on the side of the Blue Anchor Inn. It’s the location of the 2nd horse change for Lt Lapenotiere, when he rode this route 212 years ago. 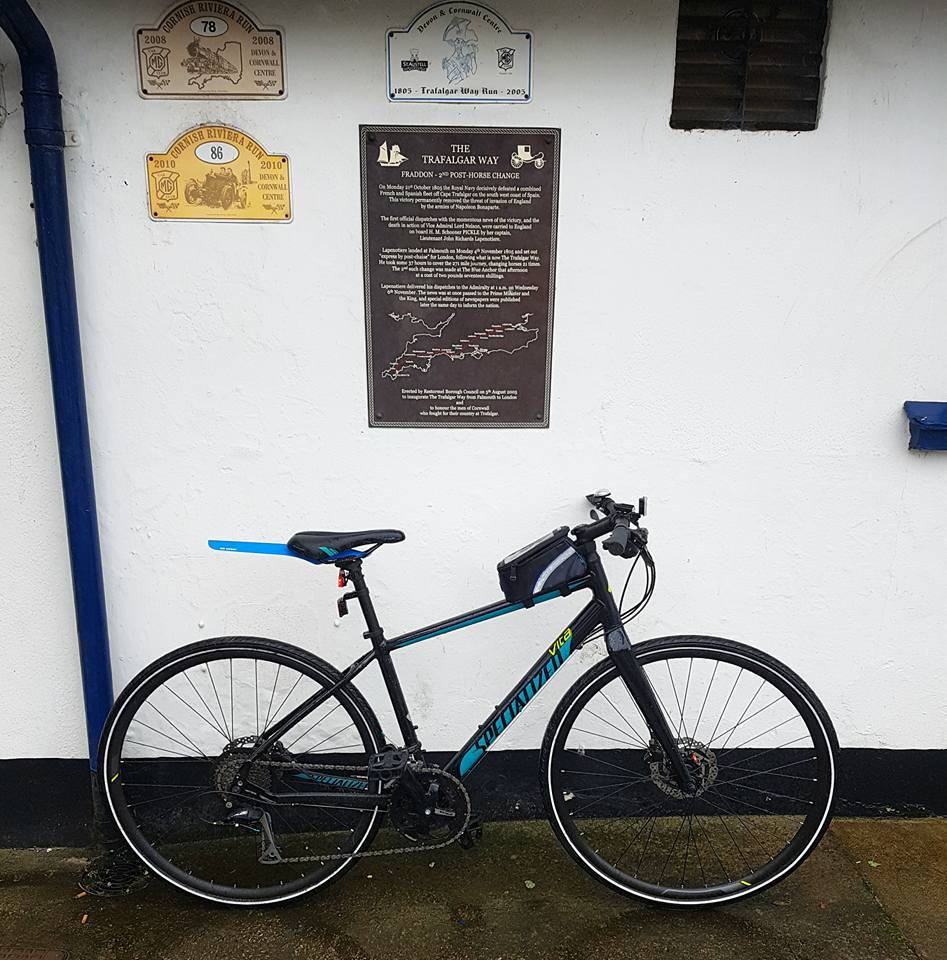 From Fraddon, we headed out along the old coach road through Indian Queens, past the Screech Owl Sanctuary and Gnome World (yes, that is a real thing) and basically cycled parrallel to the A30 for the majority of the ride in to Bodmin.Anyone who knows me, knows I love hiking up hills but it when it comes to cycling up them? No.

I was determined not to get off and push and so as slowly as I was cycling, I made it up the long, slow hill in to Bodmin (who builds a town on top of a hill, I ask you!).

At one point I think the double decker bus behind me was all but stopped, but thankfully he waited patiently until he could get past me safely. I’m glad, because I think if I’d stopped on this hill, I’d not have got going again without walking!

Anyway, what goes up…

There was a lovely downhill in to the town centre and we found the next plaque very easily next to the Shire Hall! 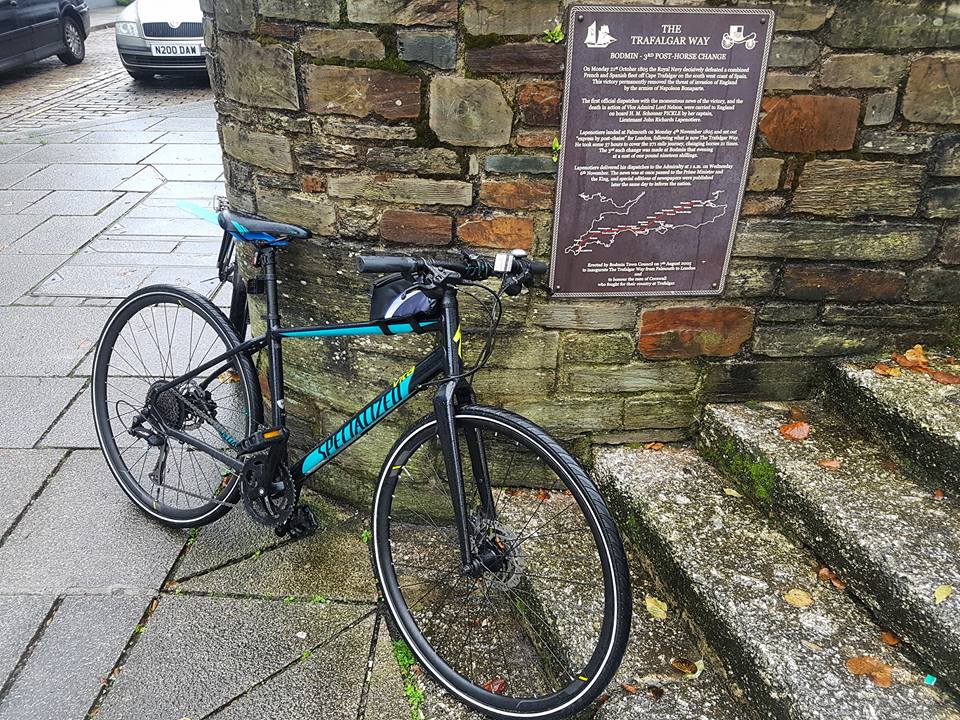 We continued out of Bodmin along the Camel Trail, partly because I hadn’t cycled any of it and it’s beautiful, but also because again it avoided a very nasty section of dual carriageway in terrible conditions! The fog was thick and heavy over Bodmin Moor!And so we started the next leg to Launceston… I didn’t make it this time, but will be heading in to Launceston and beyond on next weekend’s leg! 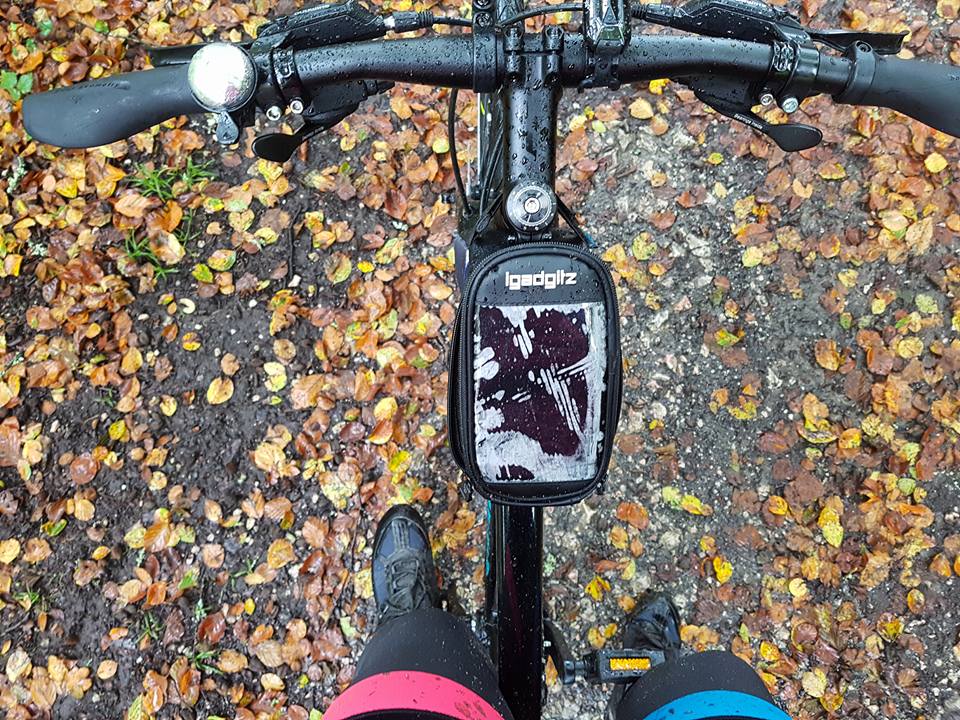 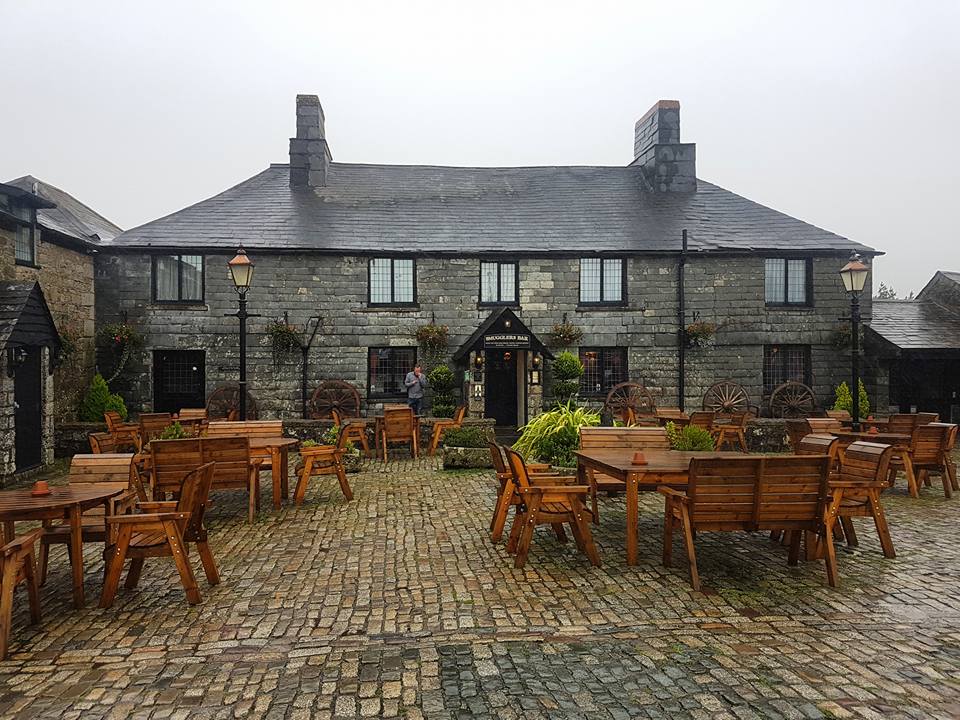 I did get to finally see Jamaica Inn though! Setting to one of my favourite books 🙂

And so next week I’ll be starting on Bodmin Moor where we left off and heading to Launceston, Lifton, Bridestowe, Okehampton, Sticklepath, Crockernwell, Tedburn St Mary and Exeter all going well!Maybe I’ll get further but it is very much dependent on the weather, hills and my knee!

Of course, I am doing this because I enjoy it and love naval history, but mainly I am doing this to raise money to help young people get involved with The Duke of Edinburgh’s Award.

If you want to cycle The Trafalgar Way click here for this weekend’s route on OS Maps.
You can even download it as a GPX file.