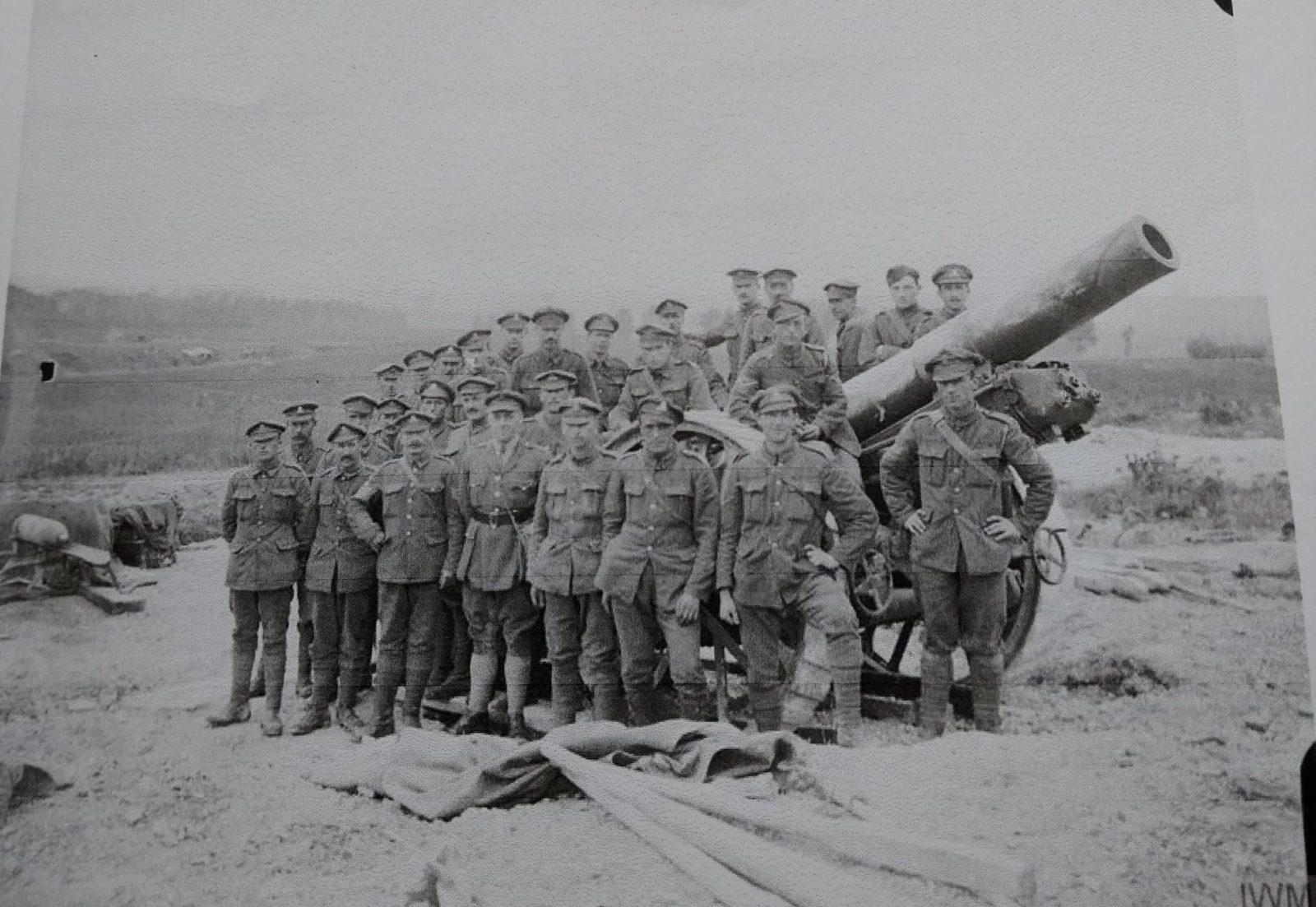 In Summer 2018, I worked on a project with the Royal British Legion and Ancestry UK as part of the #ThankYou100 Campaign. Prior to filming, I sent what I knew about my family tree over to them and they did some research for me. I was already aware that a number of relatives had fought in The Great War, but not how many, and not what roles they had.

This post is to serve as a tribute to them but also for family member’s information!

I’ve also included relatives that served in WWII, later in this post, some dead, one still living. Most relatives for both wars are on my paternal side, purely as it’s been very difficult to trace my maternal side of the family.

My 2 x Great Grandfather, on my paternal grandfather’s side of the family, born in 1887. Vivian was listed as a butcher roundsman on the census in 1911. A roundsman being someone who made butchers deliveries with a horse and cart. He was part of the Royal Army Medical Corps during The Great War, stationed as a medical orderly and was sent to Dover Castle. His job was to meet wounded soldiers returning from the war and get them to hospital. In 1917 he was transferred to Shorncliffe Military Hospital near Folkstone. He signed on a further two years after the war ended.

Born in 1890, Sidney Seabrook was my 3rd great uncle, on my paternal grandfather’s side of the family. He became a butcher, before signing up in 1914, age 23. The next year, 1915, he was deployed with the Royal Field Artillery to France. The horse-drawn RFA was the largest artillery branch, responsible for medium calibre guns and howitzers, deployed close to the front line. He received the Military Medal whilst serving, a military decoration awarded to personnel below commissioned rank, for bravery in battle on land. The award was established in 1916, with retrospective application to 1914, and was awarded to other ranks for “acts of gallantry and devotion to duty under fire” (the award was discontinued in 1993 when it was replaced by the Military Cross). Sidney was a Sgt when he left the army. 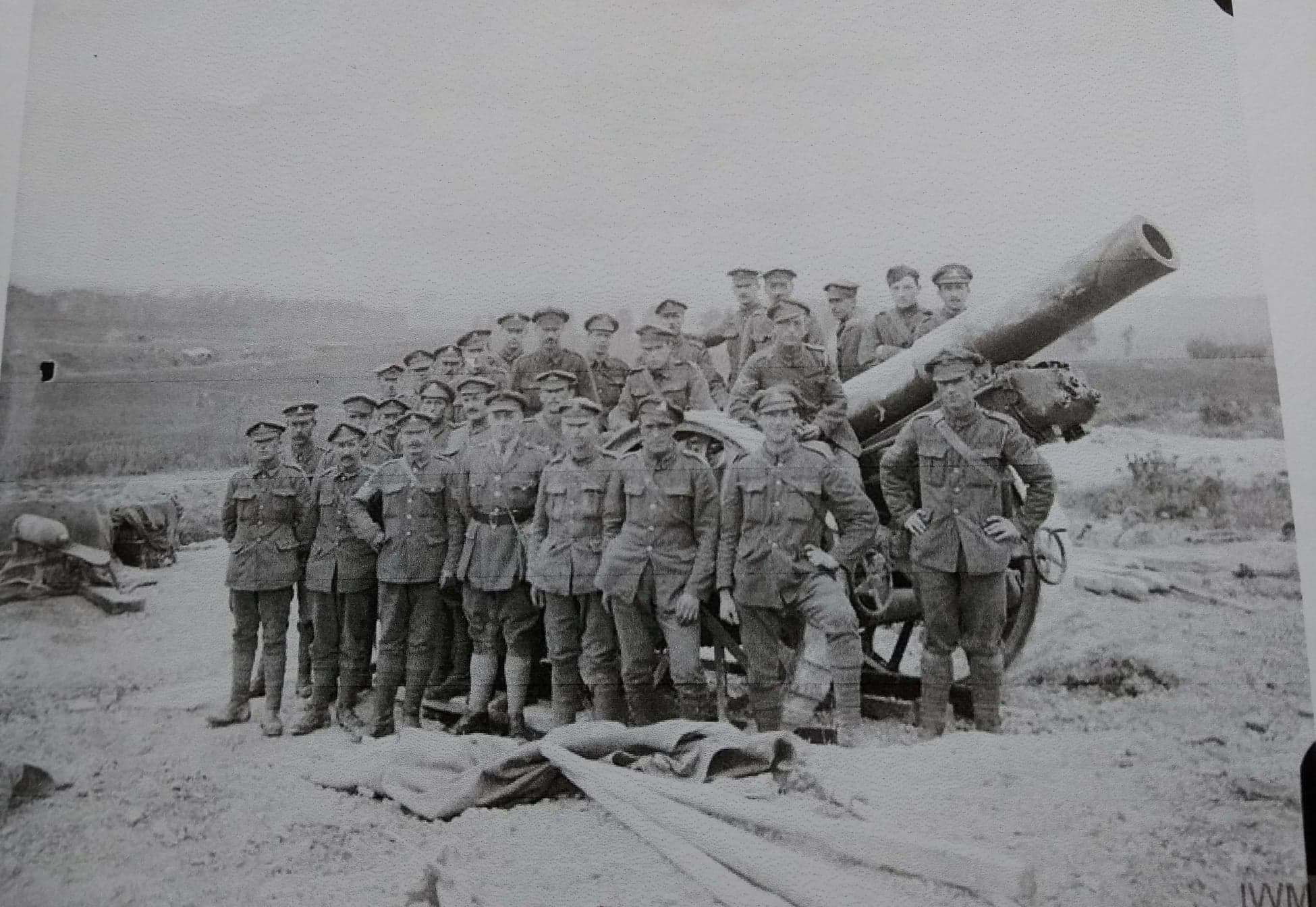 Leonard was my 3rd Great Uncle. Born in October 1881. He was actually a professional soldier before WWI started, serving in South Africa as part of the Second Boer War, and also in St Helena and the East Indies. He then left to become a postman, but voluntarily enlisted for WWI, after the loss of his wife and birth of his daughter. He joined the Royal Engineers and headed out to Mesopotamia, fighting in what is now modern day Iraq. This campaign started in 1914, against the Ottoman Empire. He was finally demobilised in 1919, went home and went back to being a postman. I found records that showed he suffered from “shellshock” and had to sit a medical board, proving he was now mentally sound. They confirmed that he now “sleeps and eats well and is physically fit” when he returned home from Basrah.

Brother of Leonard, Vivian and Sidney, Frederick, my 3rd Great Uncle was born in 1879 and worked as a pawnbroker’s assistant, before becoming a railway policeman. He then joined the Army, and whilst serving with the 14th Bn, The Royal Warwickshire Regiment, Private Frederick Seabrook was killed in action on the 23rd of May 1918. He is now buried in Merville Communal Cemetery Extension, Nord-Pas-de-Calais, France.

Born in 1895, Walter Collins was on my paternal grandmother’s side of the family. On the 1911 census he was listed as a farm labourer in Kent before serving in the Royal Garrison Artillery in the war. I can’t find a lot about him, but we do know he was gassed during the war in Belgium.

We also have a couple of photos of him before and after the war, with some very poignant notes. 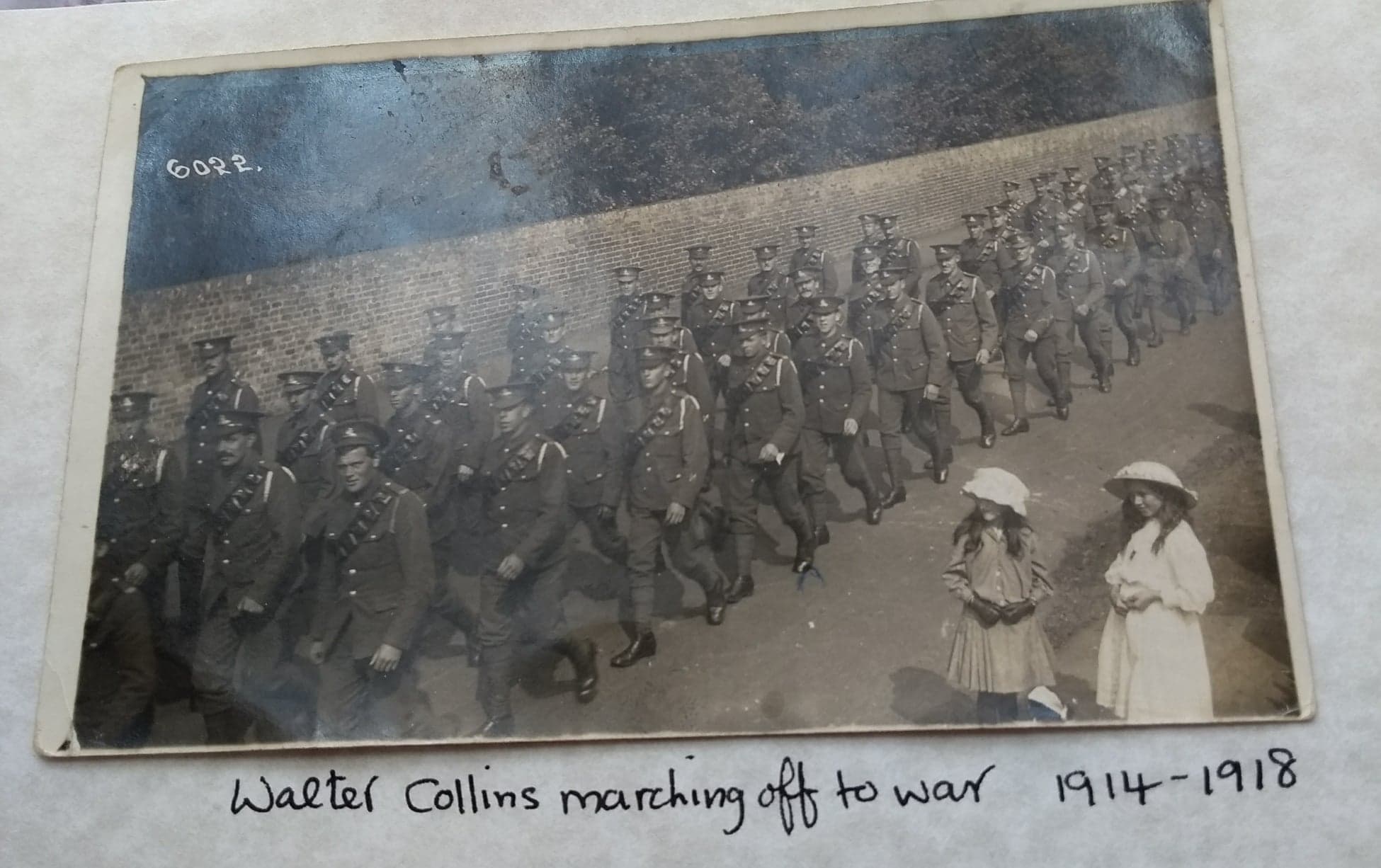 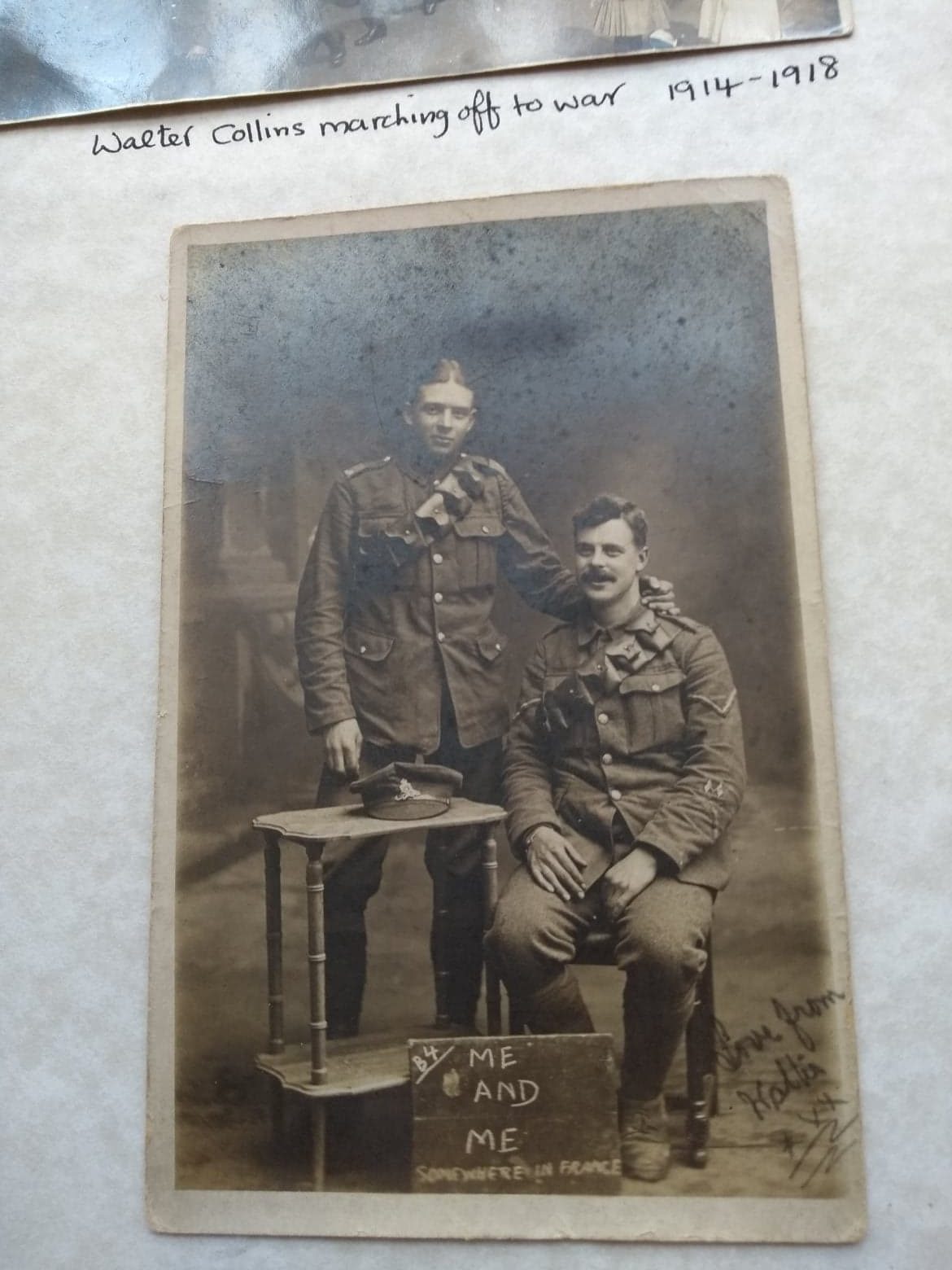 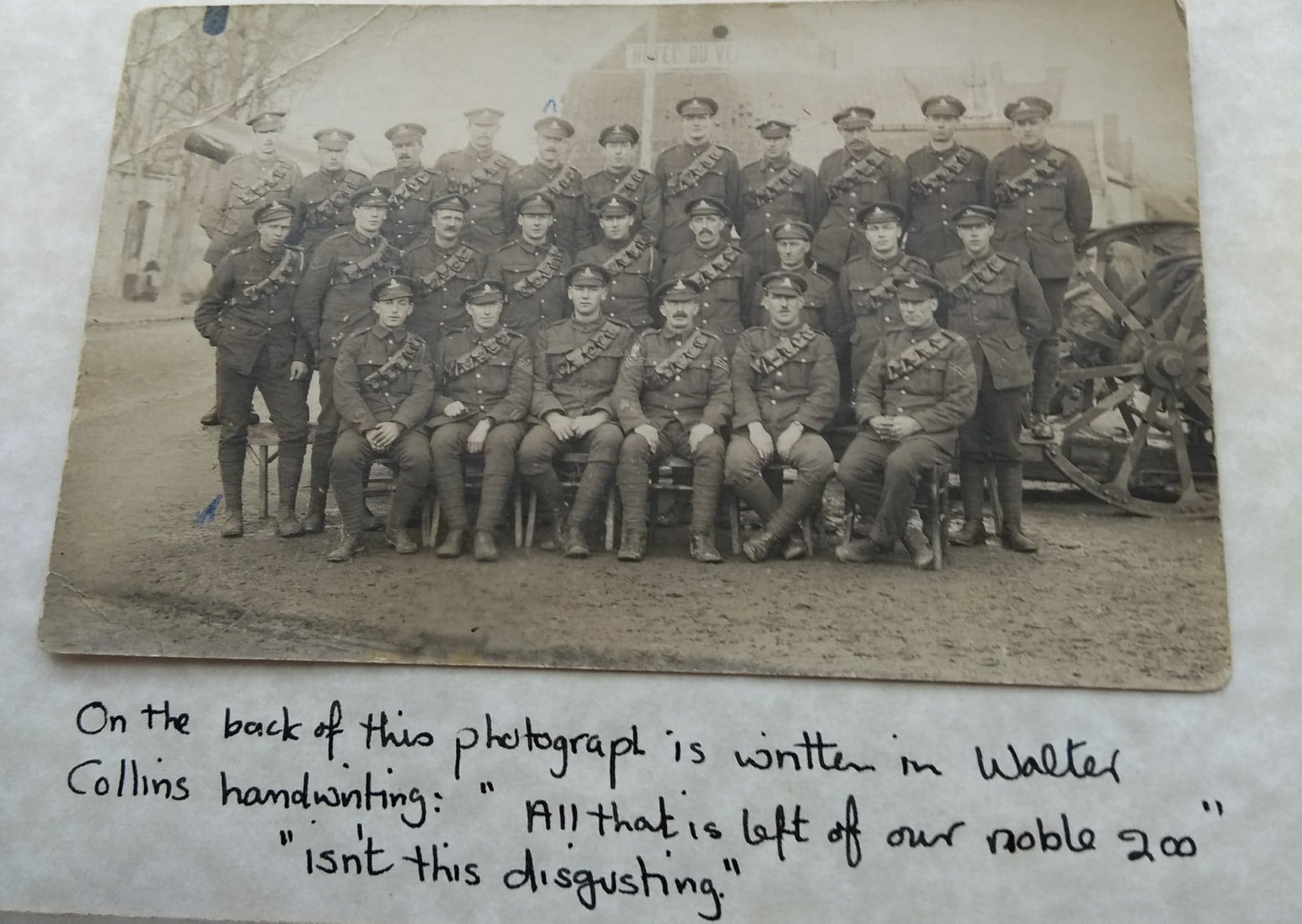 Frederick Jamieson was my 3rd Great Uncle on my paternal Grandfather’s side. He served as a Private with the Coldstream Guards, and that he died of wounds on 31st Oct 1914 at No 4 General Hospital. It looks like he was buried in Wimereux Cemetery, and listed on a family memorial in the West Cemetery at Darlington, and the family grave information states the below;

Despite me having accurately tracing Richard Jamieson and Hannah Jamieson (nee Barnett) in my family tree, from documents we have at home, there is no record within Ancestry UK of them having  a son named Frederick. They must have, as he appears mentioned on their gravestone, but there are no records, which seems odd to me. If anyone can help me with this, I would appreciate it 🙂 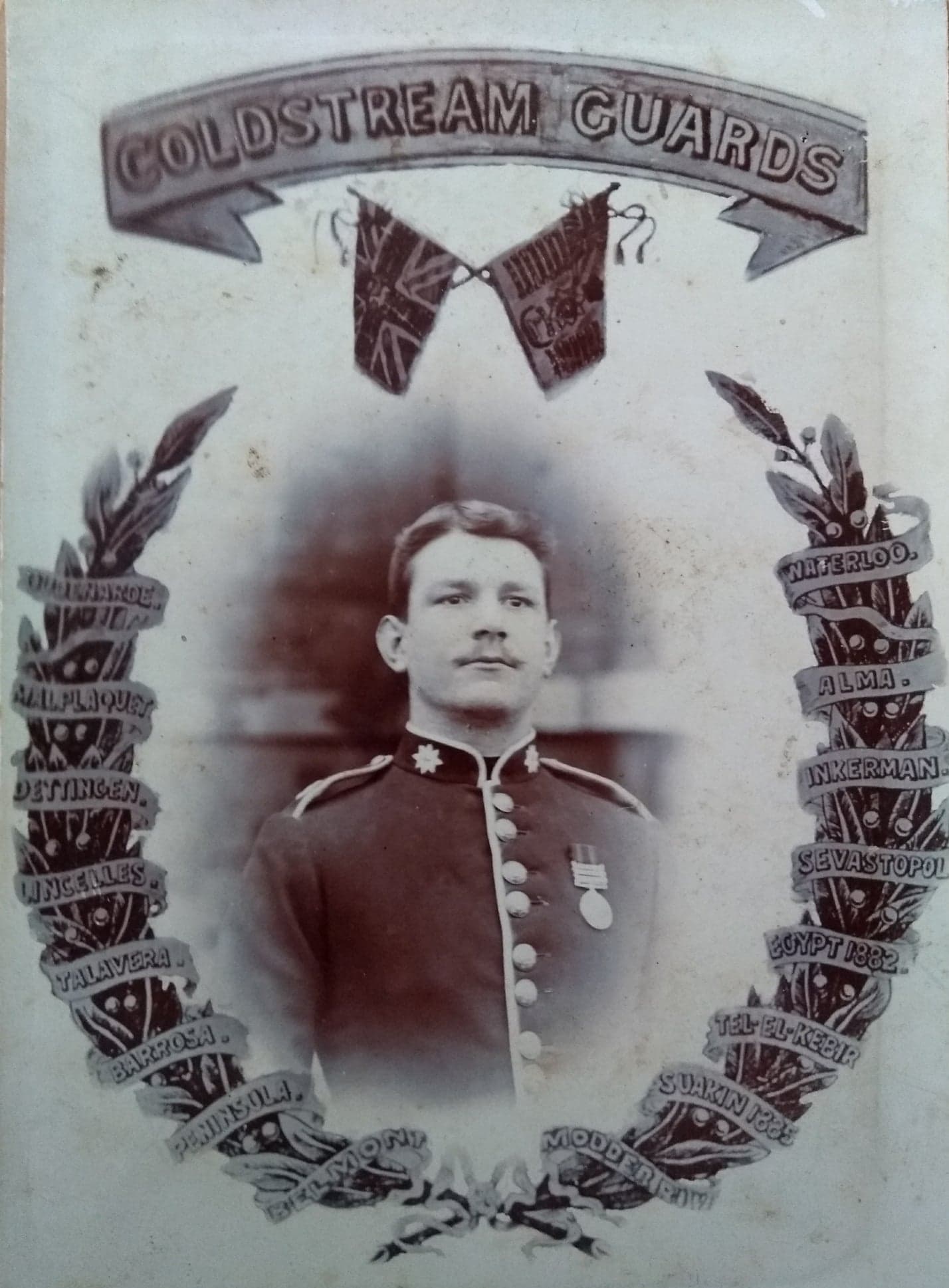 My maternal grandmother was adopted, so we didn’t know much about her family, but did find William Wilsher, her father, who served with (we think) the Kings Royal Hussars. I’m sure someone will correct me if I’m wrong based on uniform! The oak leaf on one of his medals means he was mentioned in dispatches. 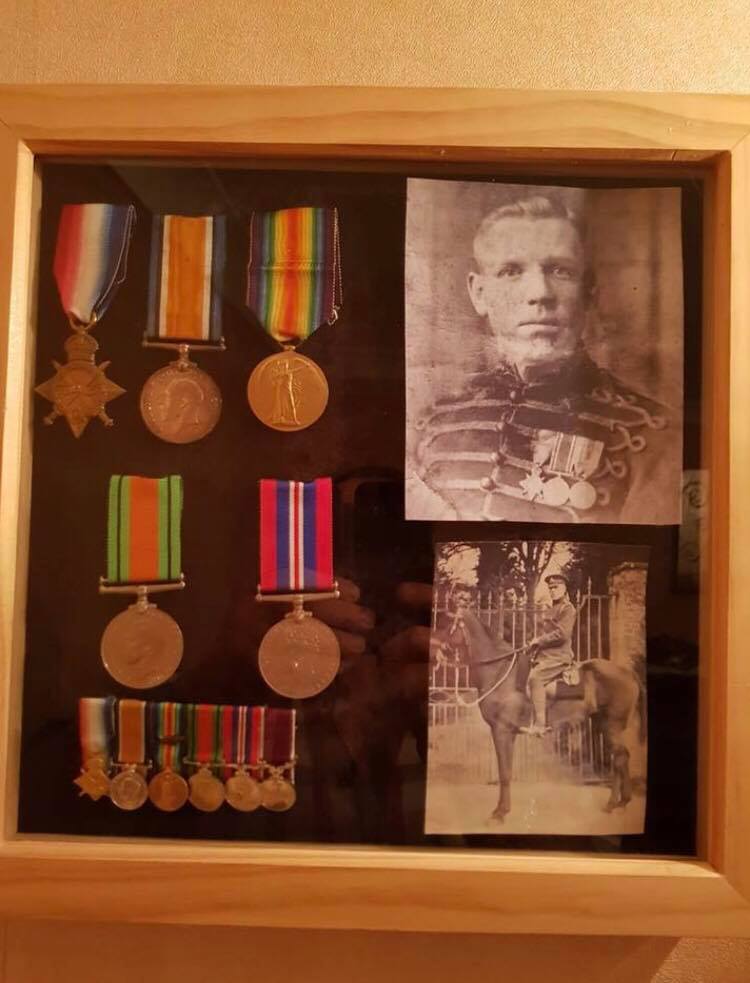 Born in 1912, fought in campaigns in Italy, believed to be some kind of messenger and travelled around on a motorcycle in WWII. Again, someone I can’t find any records on, though we have pictures of him…

Ancestry has a Victor John Seabrook that was a POW in WWII, so this is one to keep digging for information on over the coming months. 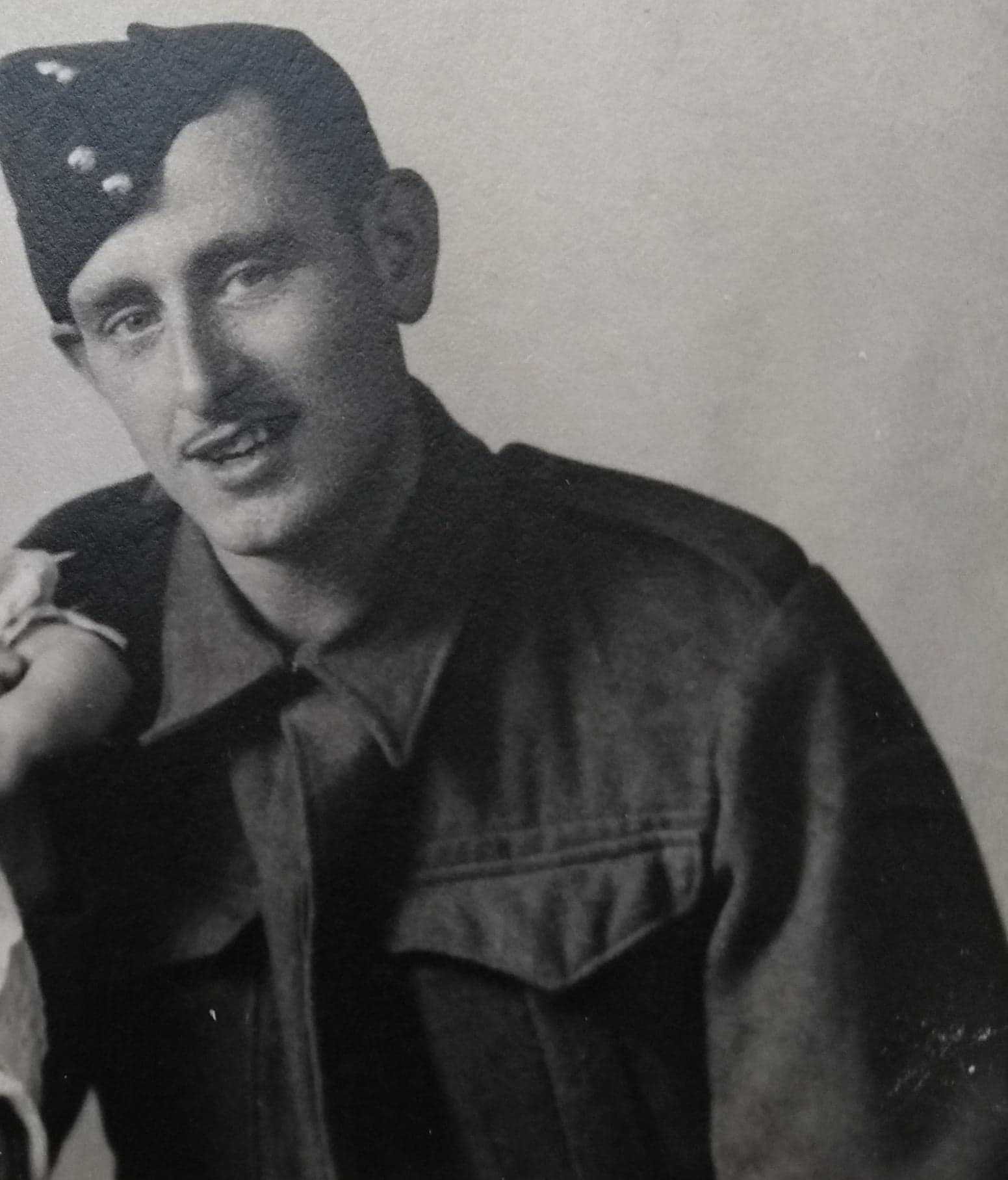 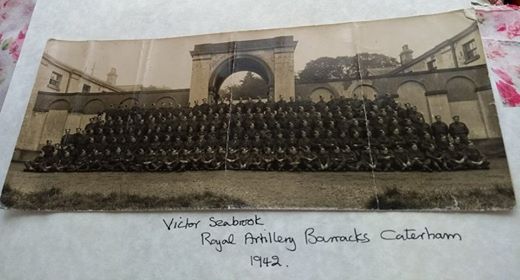 Another tricky one… I have a photograph of him, his name, and his birth date, but can’t find any military records, despite having the below photograph.

Robert Collins pictured in the centre. 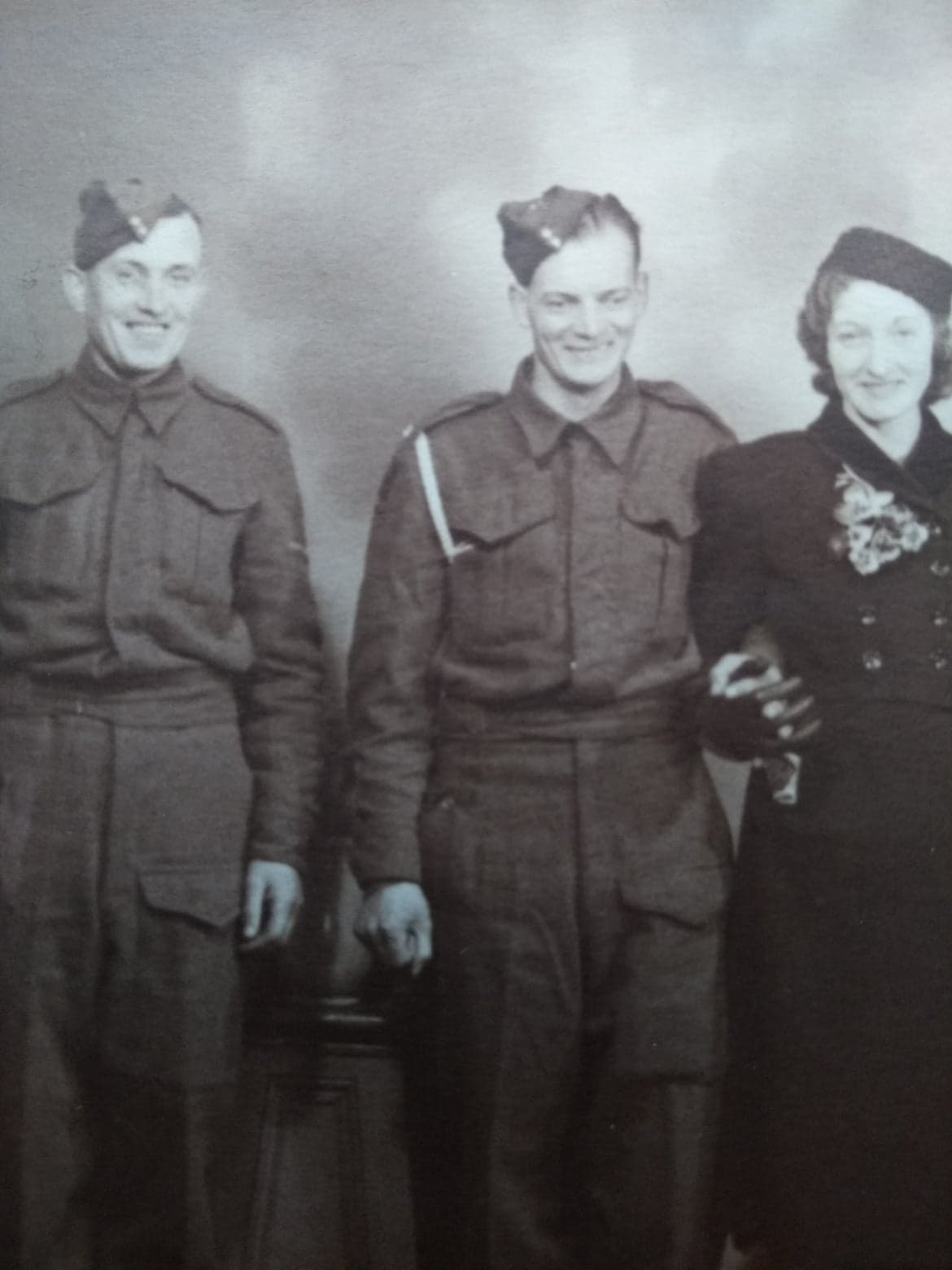 My maternal grandfather, still living, joined the 12th Devonshire Regiment (fondly known as the ‘swedebashers’) and part of the 6th Airborne Division.

He landed on Sword Beach on D-Day, having never trained for beach landings, or been to sea, after being told that there were not enough gliders for everyone.

From Sword Beach, the 12th Devons held the left flank of the bridgehead over the River Orne, where their orders were to seize intact the bridges over both the River and the Orne Canal, between the villages of Benouville and Ranville — and hold them at all costs until relief arrived. They were to avoid combat if possible and make for the village of Ranville as quickly as possible to relieve the 12th Battalion, the Parachute Regiment, crossing Pegasus Bridge at 1600. From here, they pushed on to the Seine. 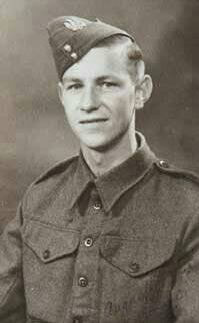 After the Seine? He returned to Bulford for training, before the division was recalled to the Ardennes, on 20th December 1944, in order to help counter the German army’s surprise offensive at the infamous Battle of the Bulge.

The third time he returned to Europe as in a glider, landing 40 miles behind enemy lines with the objective of linking up with the Russians at Wismar. The Germans were expecting them and there were vast numbers of casualties.

In 2017, Grandad was awarded the Legion d’Honneur, the highest French order of merit for military/civil merits, established in 1802 by Napoleon Bonaparte. 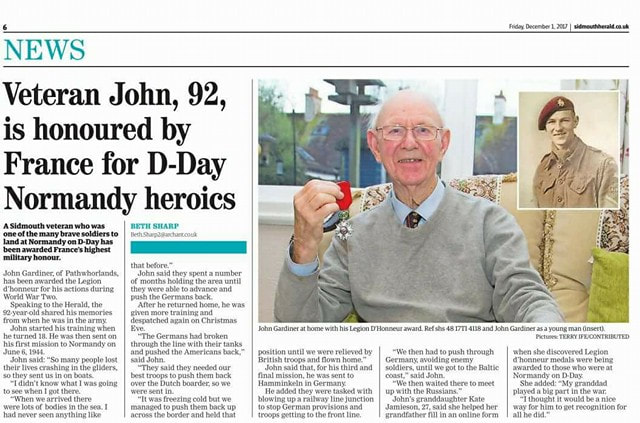 As mentioned, my maternal grandmother and grandfather’s side of the family have been somewhat harder to trace. I’m hoping to look into them a little more when I have more time, but for now, it’s been an enjoyable project finding out about those I have been able to hunt out.