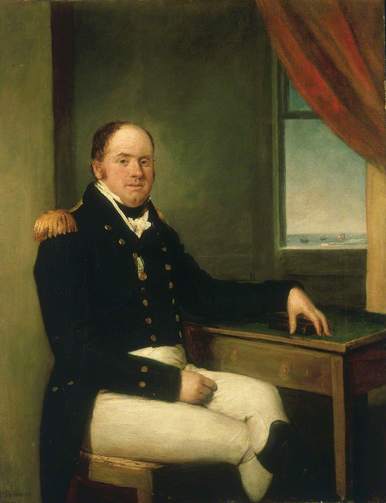 If you want me to tenuously link it back to the great outdoors, I will keep you happy and mention that I’ll be detouring off my countrywide bike ride near Dorchester, specifically to visit the Hardy Monument, dedicated to this naval hero, the topic of today’s post.

Once more, this is the briefest of histories, as he did so much whilst serving that to give true credit would mean a post of dissertation like proportions.

I think I’ve managed to list the most important parts though.

Hardy was born in Kingston Russell on the 5th of April 1769. This obviously also being the birth year of Napoleon Bonaparte (to become his adversary in later life) and Arthur Wellesley, known to many as the 1st Duke of Wellington. Hardy was sent to Crewkerne Grammar School and in 1781 headed off to join HM Brig Helena as Captain’s Servant. The vessel was commanded by Captain Francis Roberts, from Burton Bradstock, a neighbour of the Hardy family.

Captain Roberts wrote to Hardy’s family informing them that he was sure that Hardy would ‘make a complete seaman one day or other’.

How true that was.

From the Helena hardy transferred once more with Captain Roberts to HMS Seaford and remained on board for a year, aside from a short break for studies at Milton Abbas Grammar School, also in Dorset.

There is a famous story/rumour that whilst at Milton Abbas, Hardy climbed the abbey tower with someone else, they lowered another boy down to take eggs from a nest, but threatened to cut the rope unless the boy (at this point hanging precariously from a rope) gave them half the eggs.

In 1784, back at sea he transferred once more to HMS Carnatic and from this point in 1784 until 1790, when he joined the Hebe as midshipman, there are no records of him in the naval records.

Between 1790 and 1794, Hardy served on a number of different naval vessels, before transferring to HMS Minerve under Captain Cockburn in 1796. Then Commodore Horatio Nelson hoisted his broad pennant to the Minerve for the action against the Santa Sabina and the Matilde, off Carthagena, and it’s likely that this would have been Hardy’s first encounter with the man he would serve with and become a close friend of.

In February 1797, Hardy was at sea when he saw a man fall overboard. He immediately set off from the Minerve in one of the ship’s boats to rescue him. The current pushed them towards the Spanish ship, and Nelson, seeing the bravery was said to have shouted, “By God, I’ll not lose Hardy! Back the mizzen topsail”, instantly slowing the Minerve and causing the Spanish ship to do the same, allowing them to pick up Hardy and the man who fell overboard.

​3 days after this, the Minerve joined the action at the Battle of Cape St. Vincent (<-more Kate navy blogging here). 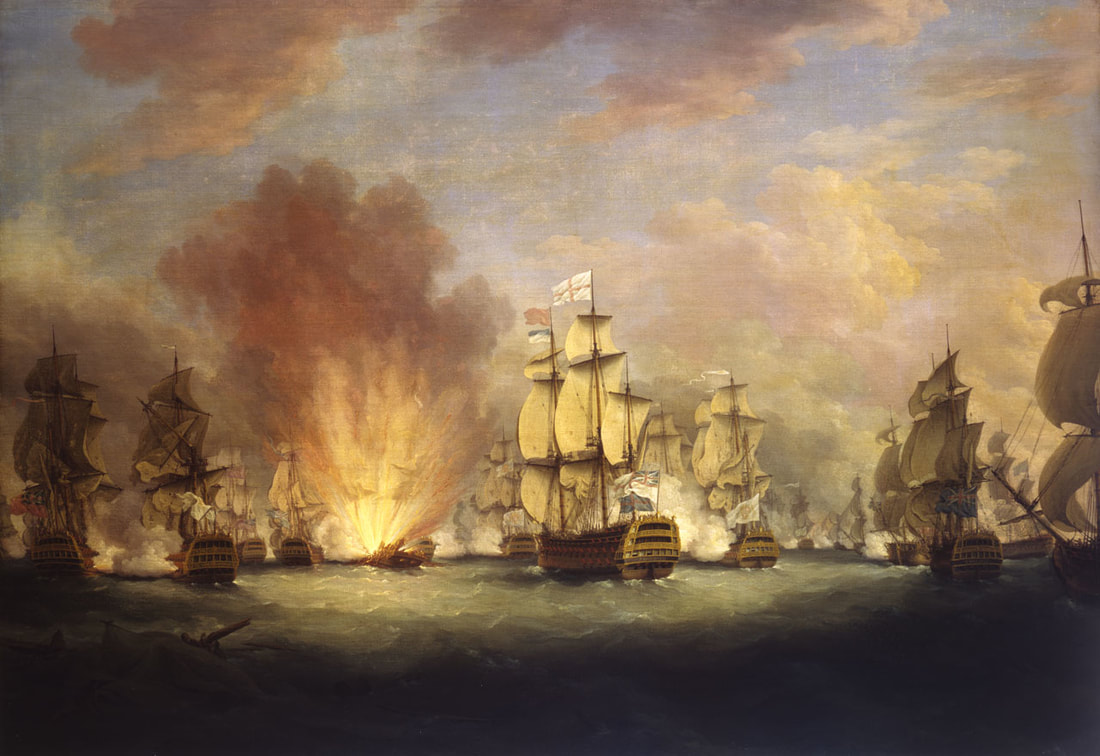 A number of months after the Battle of Cape St. Vincent, the Mutine (a brig) was captured and Hardy placed in command. He continued to serve under Lord St Vincent and Horatio Nelson as Master & Commander at only 28 years old.

Whilst in command he captured a number of prizes, keeping him popular with both agents and crew. The Mutine joined Nelson’s squadron in June. A storm had dis-masted flagship, HMS Vanguard, and Nelson was miserable, but glad to see his friend.

Two weeks later, Nelson sailed for Aboukir Bay and the, now famous, Battle of the Nile. After the battle, in which hardy proved both his command and the Mutine invaluable, Nelson transferred Hardy to the Vanguard as her Flag Captain.

​Again, he was still under 30 at this point. 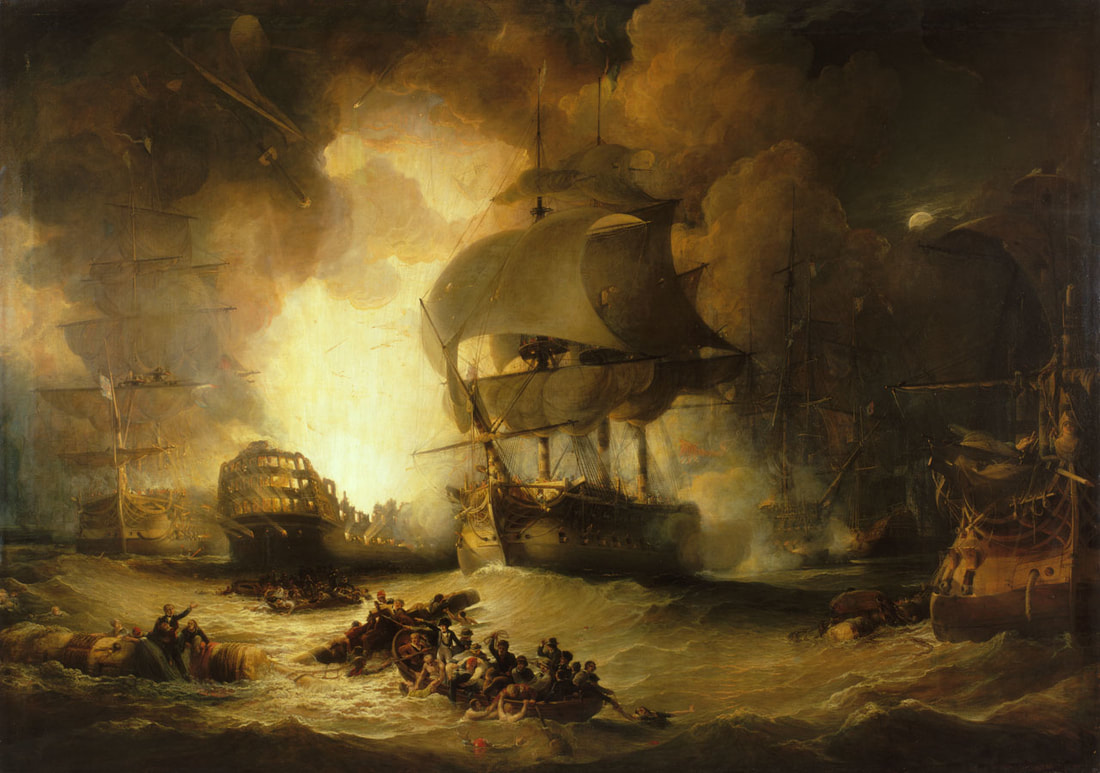 In June of 1799, Nelson transferred to HMS Foudroyant, taking Hardy with him as Flag Captain, where he served for just over a year, in which time he helped with the reestablishment of Ferdinand’s kingdom at Naples, before transferring to HMS Princess Charlotte as Captain and returning to England.

In 1800, he took command of HMS San Josef, before transferring to HMS St George and once more took on the position as Nelson’s Flag Captain. In 1801, Nelson was put in command of the Baltic Fleet and Hardy headed for Copenhagen alongside him.

Whilst in Copenhagen, in the black of night he made soundings in an open boat to work out the depth of the water, and if the entire fleet had used Hardy’s calculations, then two of the British ships would not have run aground in the action, it would have been a more decisive victory and there would have been fewer deaths. HMS St George (Hardy’s ship) drew too much water  in the shallows and could not take part and so Nelson transferred to HMS Elephant for the Battle of Copenhagen.

Hardy joined HMS Victory after her refit was completed in May 1803, at a cost of around £70,000, HMS Victory sailed for Portsmouth, where Horatio Nelson raised his flag on board her after being made Commander in Chief Mediterranean Fleet. However, upon realising that she was not ready for sea, Nelson sailed for the Mediterranean on a different ship, HMS Amphion. Cornwallis declined the opportunity to raise his flag on the Victory and so, after she had been made ready for sea and had reached the Mediterranean, Horatio Nelson once more raised his flag onboard the Victory with Hardy as her Captain. 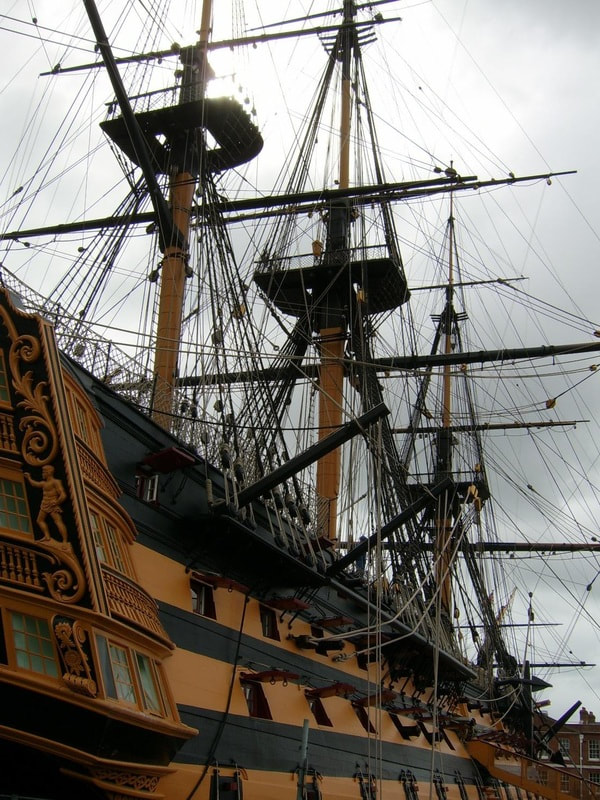 In August 1805, Hardy and Nelson, onboard HMS Victory, after having been stationed off Toulon, joined Admiral Cornwallis’ Channel Fleet at Ushant before sailing for England. The Mediterrannean fleet, under Cornwallis sailed for Ferrol, Galicia (Spain).

In September, Nelson made his final voyage with Hardy from Portsmouth on board HMS Victory, alongside HMS Euryalus. They were headed for Cadiz, where the Franco-Spanish fleet were moored in preparation for Napoleon’s now abandoned invasion of Britain, with the British fleet less than 50nm away.

Around the 10th of October, Nelson received word that the enemy were due to depart Cadiz that evening, the fleet was gathering close to the mouth of the harbour and showed signs of preparing to make way. Nelson made plans for a morning battle, to ensure that they would have the best light of the day.

The weather was causing problems, the enemy fleet could not leave Cadiz. Nelson did however use this plan as a template for Trafalgar, allocating ships to each column and giving them a position in the line. This did change a number of times prior and during the Battle of Trafalgar but much remained the same. He wanted to sail at full speed, with his fleet in two lines. One commanded by himself and one by his second-in-command Vice Admiral Cuthbert Collingwood, with a small reserve group if required. His intention? To cut through the Franco-Spanish line, in order to isolate the ships at the rear, defeating them before the ships at the front were able to turn and come to their aid.

The Franco-Spanish fleet managed to depart from Cadiz on the morning of 19th October. Villeneuve had received word of British ships in Gibraltar and took this as a sign that Nelson’s fleet would be weakened (little did he know). On the evening of the 20th October 1805, the two fleets were moving towards each other cautiously and a battle was inevitable.

Soon after the fighting began on October 21st, Nelson and Hardy were pacing the deck, splinters cutting Hardy’s foot open. Nelson remarked to him that it was ‘too warm work to last long‘ and they continued. Unfortunately, Nelson was doing so in full dress including his four stars. A marksman hit him from the Redoutable at around half past one. Nelson shouted “they have done for me at last, I am shot through” to which Hardy replied, “I hope not“. Under Hardy’s orders, Nelson was taken below deck.

Even whilst dying Nelson wanted news of the battle and Hardy gave it to him. When informed that the British fleet had hit 14-15 of the Franco Spanish fleet, Nelson exclaimed, “that is well, but I bargained for 20“.

He asked Hardy not to throw him overboard, to look after Lady Emma Hamilton (Nelson’s mistress) and according to most history books asked Hardy to kiss him. Hardy did so, and Nelson said, “Thank god, I have done my duty“. Hardy kissed his forehead, Nelson asked who it was and upon realising it was Hardy said, “God bless you, Hardy“. before passing away.

After the battle, Hardy was not able to write his account for 6 days due to weather. Victory was towed to Gibraltar for repairs and arrived back at Portsmouth on December 5th. One month after news of victory at Trafalgar had reached the Admiralty. Nelson’s body was taken to Greenwich and at his funeral one month later, Hardy carried one of the banners in the procession.

In his will, Nelson left Hardy all his telescopes, sea glasses and a hundred pounds. He also received an enamel ring from Nelson’s family marked with ‘N.B’ (Nelson and Bronte) and ‘Trafalgar’. 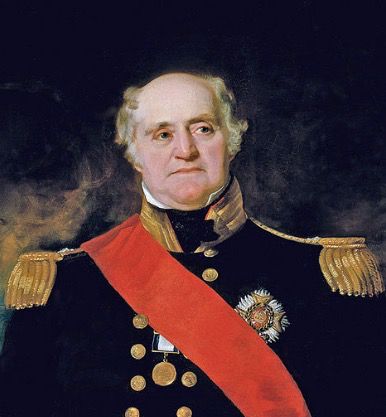 Hardy was created a Baronet in 1806 for his efforts at Trafalgar and given command of HMS Triumph headed for North America. He married the daughter of his Commander in Chief Nova Scotia and when his new father in law, Sir George Cranfield Berkeley, was sent to Lisbon, they accompanied him, leading to Hardy being made a Commodore in the Portuguese Navy in 1811.

He took part in the War of 1812, whilst in command of HMS Ramillies, before going on to be appointed a Knight Commander of the Order of the Bath in 1815 and commanding the Royal Yacht in 1816. He finished his naval career as Commander in Chief of the South America Station on board HMS Superb in 1819.

You may well have seen the Hardy Monument near Dorchester (as mentioned way up there^). This was paid for using public money after Trafalgar and the location as chosen for a very specific reason. You can see it from the sea and use it as a landmark to navigate. It’s been on admiralty charts since 1846 and you can spot it from around 60 miles away.

As I said, I tried to keep this to purely what I feel to be the most important aspects of his life and so there is a fair amount missing. You can find a lot of information about Hardy online, and there are plenty of books available.

If you want any recommendations, let me know!