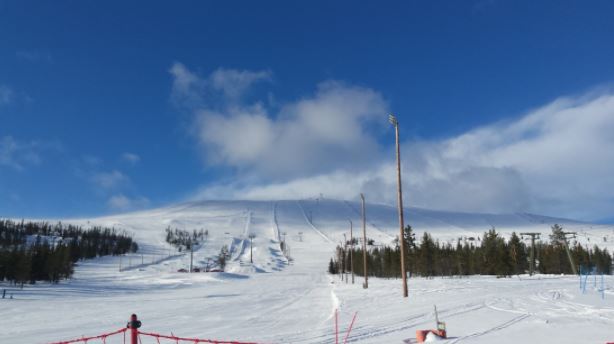 It’s that time of year when everyone is planning their winter holiday! As such, I thought I’d share a little about my trip to Finland.

I’d never been to Finland before, although the Nordic countries are all on the bucket list, so this was exciting for me. Not only was I going skiing (my favourite), I was going skiing north of the Arctic Circle, with a chance of seeing the Aurora Borealis, whilst being guaranteed snow, low temperatures and saunas every day… What’s not to love?

Finland is big on the whole sauna lifestyle. One thing I will say is that if you’re shy, be prepared. The majority of saunas in the country do not allow swimsuits, and a small paper towel can’t cover that much of your modesty! I avoided the public saunas as I am one of these super shy people!

It wasn’t so bad though, our apartment at the Ylläs Saaga had its own sauna!

This hotel was perfectly situated, right on the slopes, so you could ski in and out, the bus also stopped outside if you wanted to visit the other side of the fell, or head off cross country skiing over the lake in Äkäslompolo.There really was something for everybody as well. If you are a keen skier there was a range of slope difficulty levels, even the pros were stacking it on some of them. If you’re a more nervous skier, then it’s perfect as it’s not hugely busy. We went the week after half term, so it was very quiet, my mum had an entire slope to herself one day… 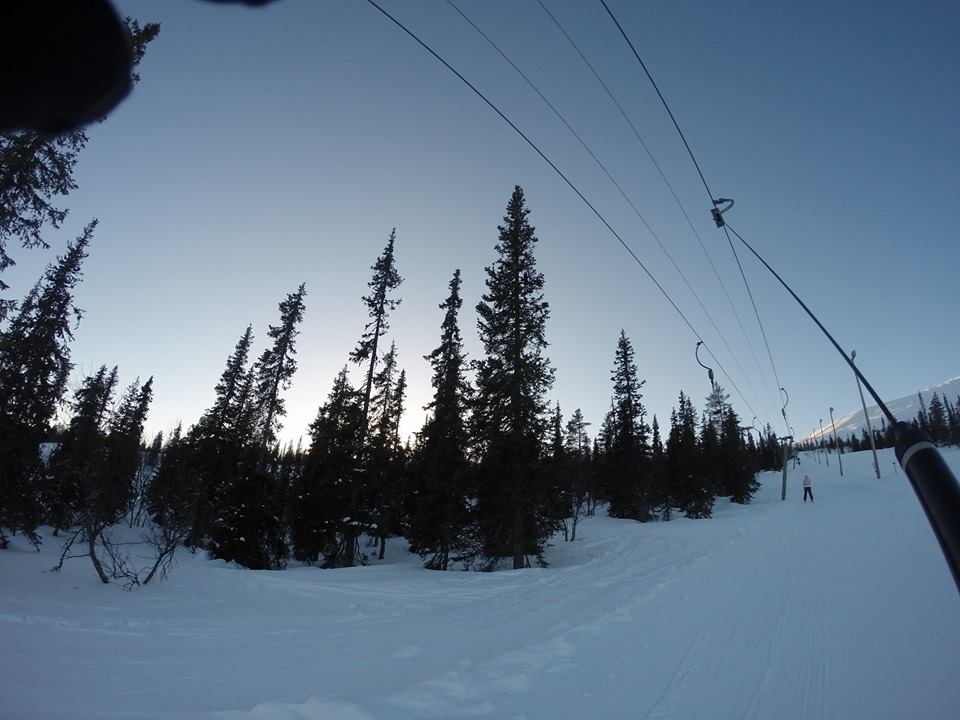 Not a fan of drag lifts? Finland is probably not the place for you.  There was a Gondola but due to the strong Arctic winds, it wasn’t always operating. I think in Äkäslompolo there were chair lifts, but we didn’t ski that side. That being said, there were a lot of boarders still, and I know drag lifts can be a pain for them! 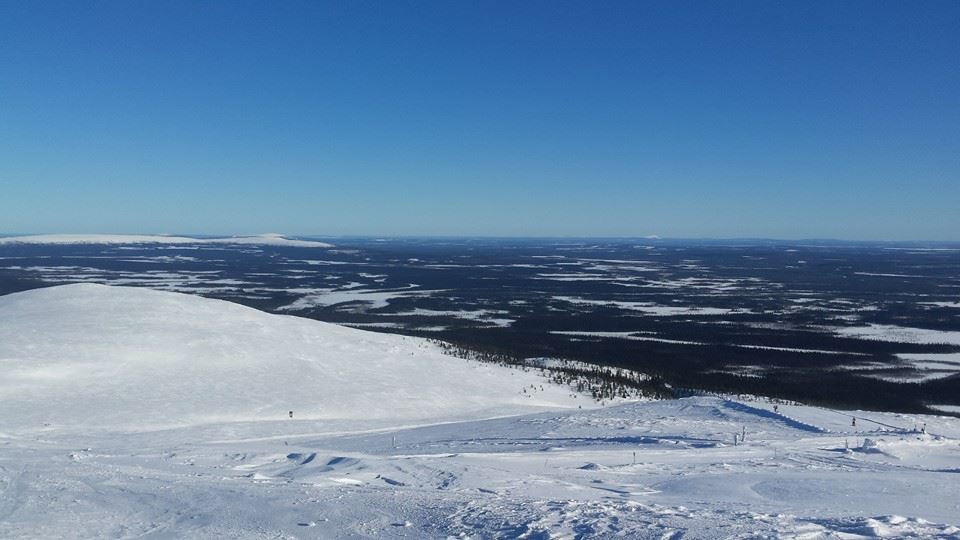 There’s a small snow park for kids, and a bigger snow park for the kids who never grew up! There’s also a mogul field. You could go cross country skiing, with a number of trails heading off from the main pistes, and there was the possibility of snow-shoeing and snowmobile safaris too.

If you do head off on the trails, keep an eye out for the small huts with a fire along most of the trails, you can cook your lunch in there, or just sit and warm up for a moment!

If winter sports aren’t your thing, there were a number of bars serving Minttu (a peppermint liqueur) hot chocolates and a range of restaurants and small shops. In the evening these had live music, and one night there was even a Jagermeister party. That being said, Yllas is doesn’t have the same apres scene as many of the Alpine resorts, so if that’s what you’re looking for, you are unlikely to find it!
Sunset wasn’t bad either!

In the evenings, we walked off piste in to the trees, beyond the floodlights and piste bashers and just stood.There was no light pollution that far north, shooting stars were flying across the skies almost every minute. The snow was crisp underfoot and as long as you didn’t wander too far off (and fall up to your waist in snow, who does that… *ahem*) it was very relaxing!

It took about 15 minutes of surveying the sky and then we saw them… the Aurora Borealis, or northern lights. It was the most amazing thing I’ve seen in the night sky. If you go expecting the bright green and pink that you see in magazines, you will be disappointed. Those pictures are taken with super cameras, but even with your naked eye, you could see the green tint dancing across the sky. We were lucky enough to see them every night bar one for the entirety of our week long stay.

​One night my stepdad and I were stood staring up for about an hour before they came out. So don’t give up if you’ve not seen them in ten minutes, and make sure you dress up warm 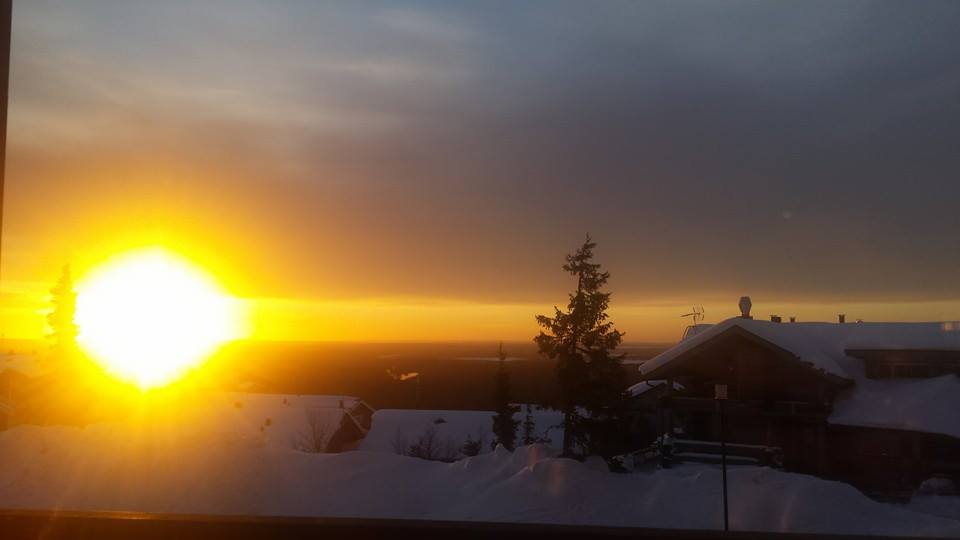 Then there’s the one I was the most excited about. Anyone who knows me will tell you I love dogs, and haven’t shut up about wanting one since my last passed away a few years ago. Just outside of Ylläs was the husky farm.We went on a safari for 2 hours and it was the most amazing experience of my life. Something I had dreamed of since watching Balto as a child. I think my first exclamation as the dogs set off was ‘MUM IT’S LIKE BALTO!’ so I was as happy as a kid in a sweet shop. 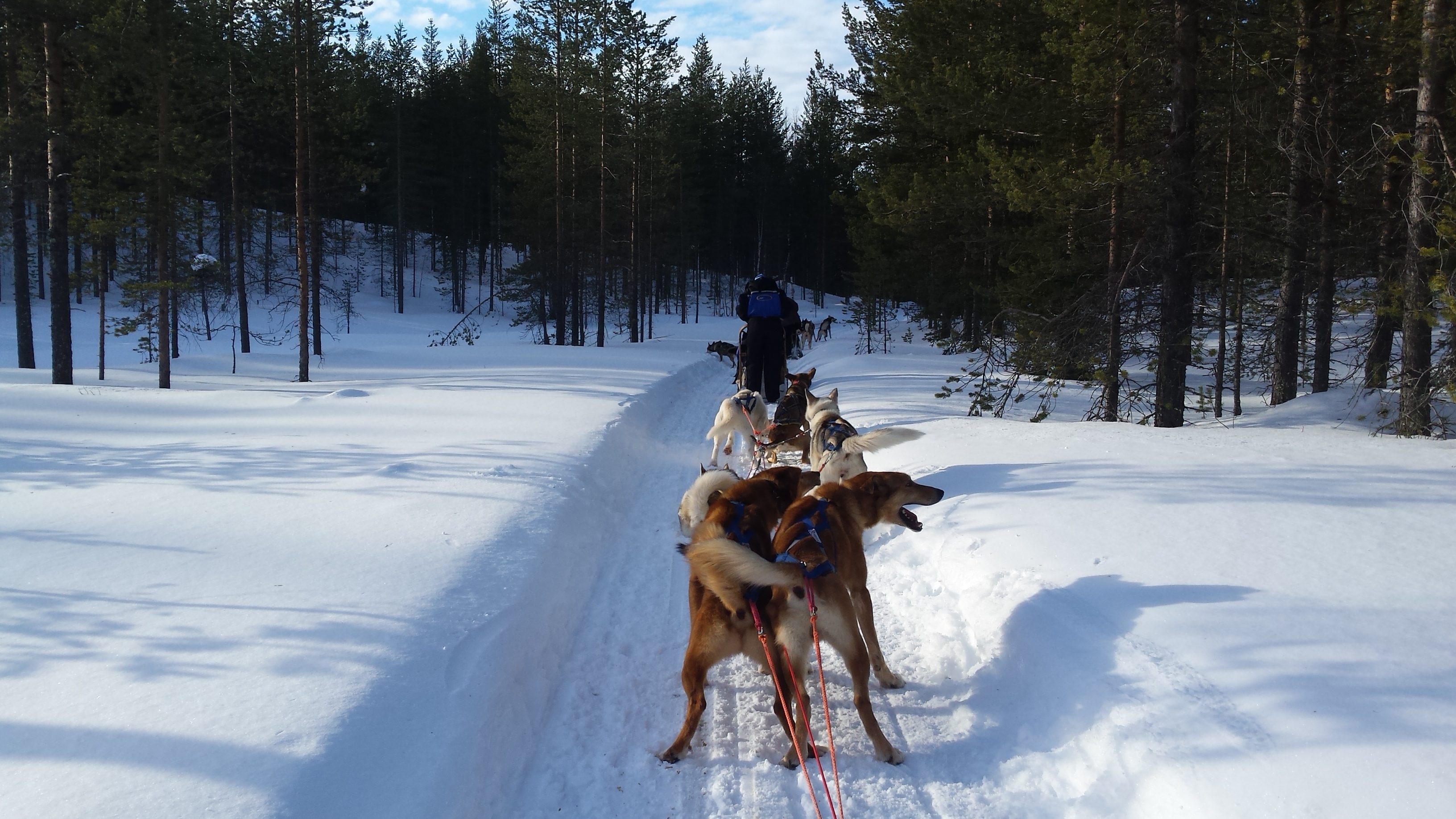 I have no shame in admitting that there was a small tear in my eye as we left! It was possibly one of the best days of my life and I have never enjoyed something so much. I definitely need to become a professional musher!

One husky basically became my best friend (I didn’t even have food on me). He was beautiful, and a real character.

​He was happy to sit there whilst I took selfies and even gave me a judgemental look at one point. 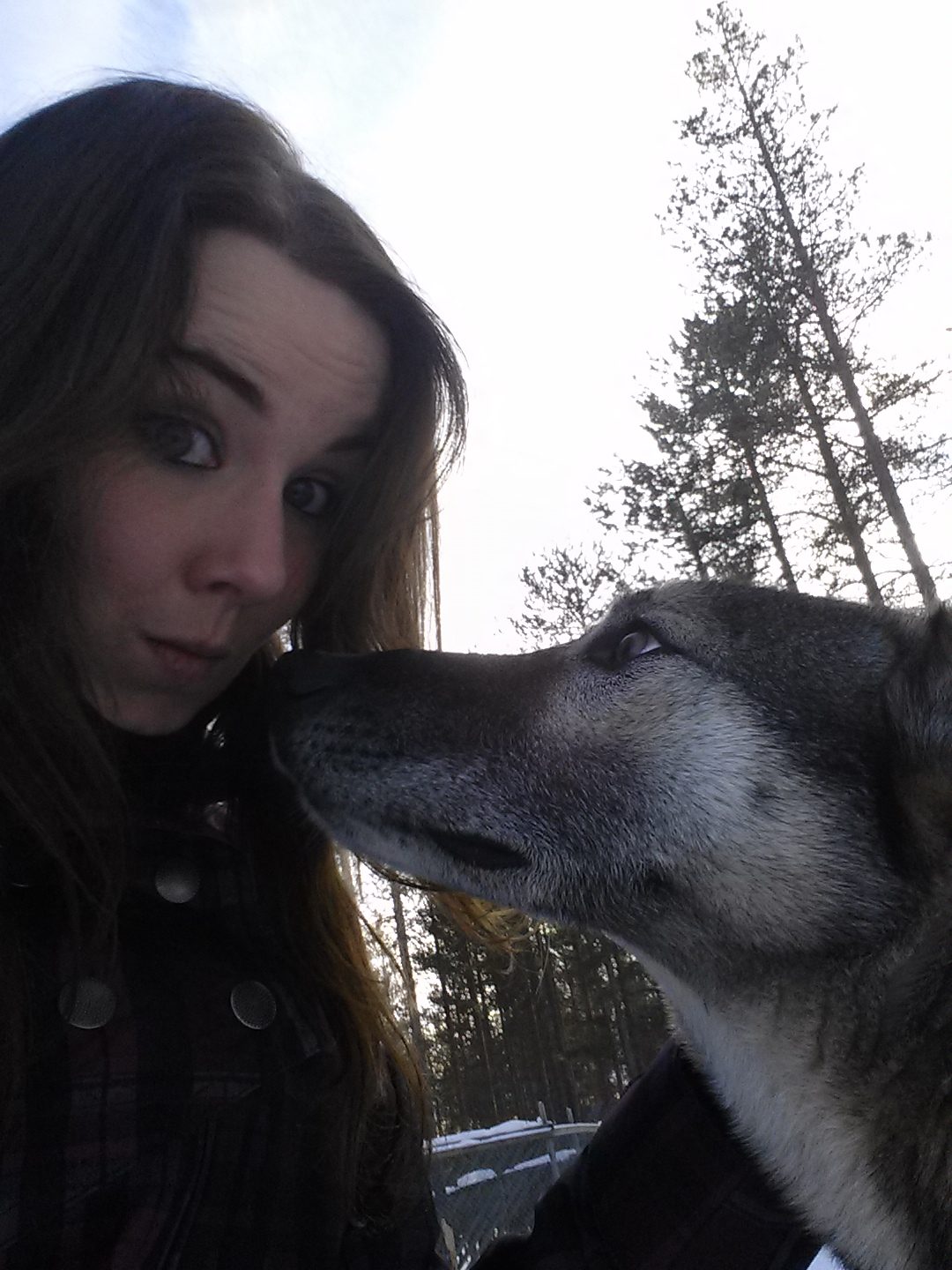 Another evening activity, and a good way to use your time until it gets late enough for the northern lights is a visit to the Snow Village in Lainio. The Snow Village is constructed annually, meaning it is never the same each year! The construction begins when the temperature drops to about -10 degrees during late October / early November. The temperature remains between -2 and -5 Celsius degrees, regardless of the outdoor temperature.​There are about 30 rooms,the suites have intricate ice carvings, there is a wedding chapel and an ice restaurant and bar. There’s even an ice castle with a slide in it for children (or 25 year old girls on holiday). Many of the tour operators offer trips, or you can make your own way out

You have to see it to believe it.

How do I visit?

With a transfer from the airport in Kittilä of under an hour, and with this many activities, why would you not visit? I can’t wait to go back one day, and am already counting down the days until I return (with a better camera) and then I’ll be sharing my Aurora photos as well!

If you want to visit Ylläs, a number of tour operators offer trips.
We went with Inghams but a small search on Google will find you a number of others! 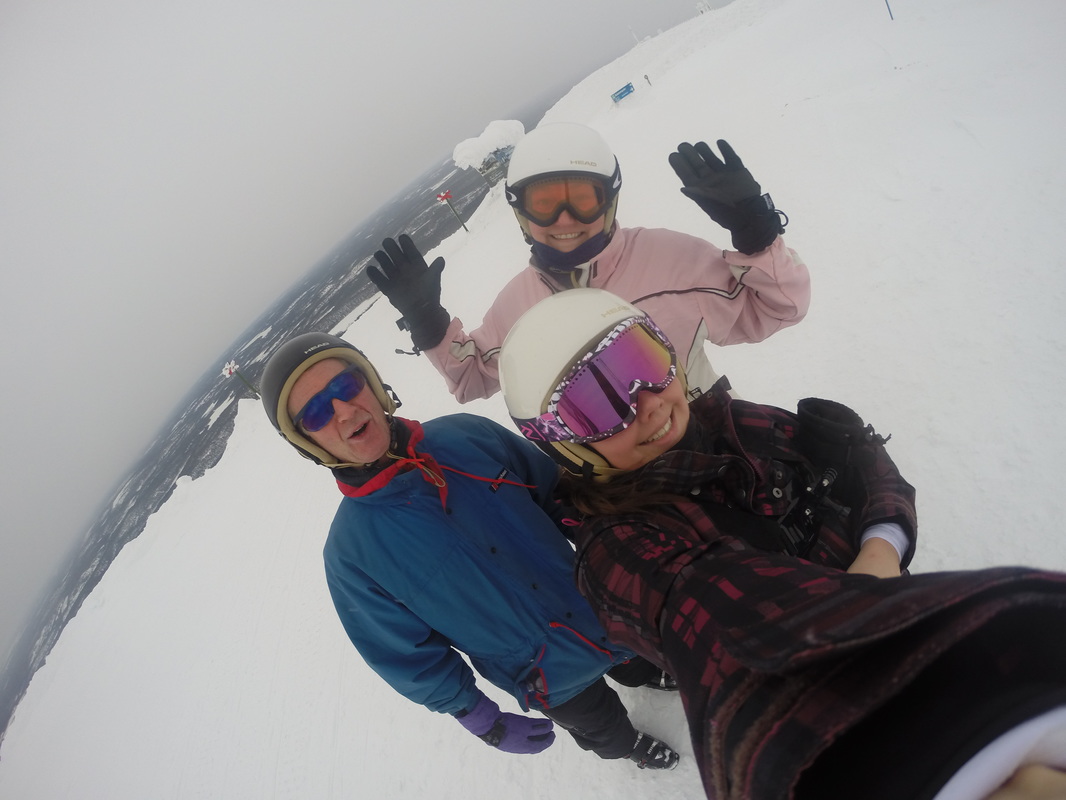 If this has made even one person want to visit Finland, which was the most beautiful country, then I have done my duty!