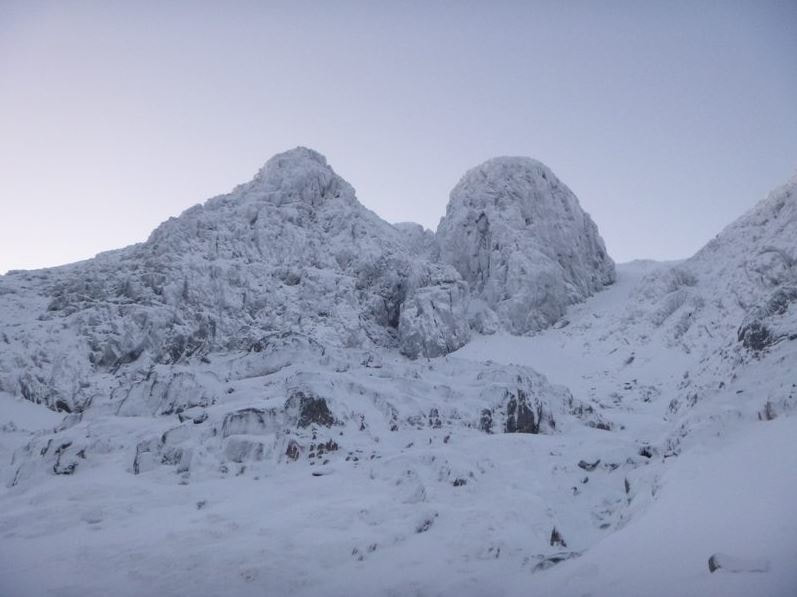 A little background to begin: this story is autobiographical, and is based on the (anonymous) writers recollection of the events of 25th April 1992. I was 22 years old.

I was about to be drafted to the Allied Training Centre in Asegarden, Norway to take up a role in the cold weather training centre, high above the Arctic Circle and, in preparation, I had taken myself to Scotland for a little self-directed adventure training in Glencoe. As someone born and raised in the north of Scotland, spending endless summers and winters in the mountains, and with Norwegian grandparents, the upcoming draft was my ideal role.

The night of 24th April 1992 I spent in the Kings House Hotel at the south end of the Glen and, in order to warm up, I jogged with my bergen from the hotel after breakfast to the main car park at Bidean nam Bian, a large massif and formerly the highest mountain in the county of Argyll. I planned a free climbing route – I was on my own – with Church Door Buttress as my primary objective but no specific route objective, meaning to solely climb on sight in the snow and ice covering the buttress.

My route up to the buttress was a mix of snow, mud and dreadful, stamina-sapping, bog, and it took me what felt like forever to get to the scree at the bottom of the buttress, where I stopped, took on some water, food, and got into my crampons, mitts and took my ice axes out, wrapped the loops around my wrists in readiness and took my normal precautions – checking everything twice and making sure it wouldn’t slip off. As a 22 year old, I considered this to be “living my best life”.

I walked up to the bottom of a piece of ice that was attached to the face of the buttress, swung my ice axes and started climbing. After a little while, I stopped around 60m above the foot of the climb to catch my breath and to enjoy the view on a sunny day of limited cloud: with the axes attached to the ice and my crampons securely attached, I put my green-Goretex-mitted left hand on to the ice and noticed water running down the back of the mitt.

** From this point on, much of this is from the recollection of others who were around at the time and others I came into contact with afterwards **

It appears that a sizeable part of the ice gave way, due to the fact that the air temperature was warmer than I’d been expecting, and had been for some days beforehand. That, and the fact that it was late in the season, means that I had made a pretty simple error in that, in my desire to get into the mountains, I hadn’t considered weather conditions.

Fortunately for me, my fall, and that of the ice had been witnessed by other people who were in the vicinity and who managed to make contact with a mountain rescue team who were on exercise on the mountain. The mountain rescue team arrived and made contact with 202 Squadron RAF, who were able to pick me up and take me to Raigmore Hospital in Inverness. I have no recollection of this, at all, and I regained consciousness in a hospital room in Inverness, in excruciating pain, wondering where I was, and unable to move. Strangely, I don’t recall much fear. I was too concerned with the pain, which an anaesthetist was able to alleviate with the judicious use of some very high quality pain medication.

My first real memory is from when the consultant arrived to talk to me, having been told I was awake, I was more than a little out-of-sorts: I was told that I had fractured my T3 and T4 vertebrae but – by a matter of millimetres – not managed to paralyse or kill myself. He was doubtful of my likelihood of walking again, and certainly he believed running again was – in a phrase I have retained in my memory since that day – “almost certainly out of the question”. I’ve considered it a matter of personal determination to prove him wrong since.

The author of this week’s post has requested to remain anonymous.​​​​​If you want to get involved with Mountain Monday then click here for all information!